What does the average man on the street think about Viagra?

It’s the little blue pill that helps men get and keep an erection and has revolutionised the sex lives of millions across the world.

And now Viagra, made in Britain and launched exactly 20 years ago, is more easily available than ever before.

Men can now purchase the best-known erectile dysfunction drug, for less than £5 a pill, from a pharmacist – without needing a prescription.

The stigma of it being an ‘old man drug’ has led to thousands of men being too embarrassed to talk to their GP about their erectile difficulties.

So will making it easier to get hold of change the perception of Viagra and encourage more men to try it?

In an attempt to seek the views of the average man, MailOnline spoke to eight men – and one of their girlfriends – about their thoughts on Viagra Connect on a glorious day in Hyde Park, London, earlier this week.

From ‘presumptuous’ and ‘bizarre’ to ’embarrassing’, they revealed what they really think about being able to buy Viagra with greater ease. One gentleman declared it left him feeling like a ’15-year-old boy trying to buy cigarettes’.

Men can now purchase the best-known erectile dysfunction drug, for less than £5 a pill, from a pharmacist – without needing a prescription 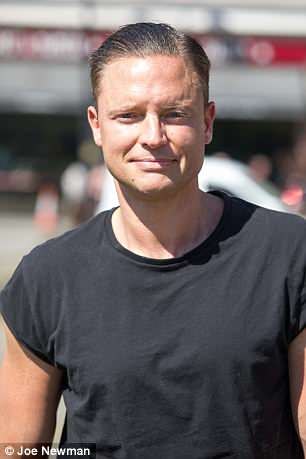 Jay Hanson, 38, from Notting Hill, said he had never used Viagra himself

Jay Hanson, 38, from Notting Hill, said he had never used Viagra himself but he did know people who’d tried it in the past.

He said: ‘I’ve never taken Viagra myself but now it’s easier to get in shops I’d be tempted to try it.

‘Now I’m 38 I’d think about it more but I wouldn’t have considered using Viagra ten years ago.

Mr Hanson, who works in film production, said: ‘There’s a stereotype of drug users taking Viagra or steroids and that puts me off.

‘It’s also very presumptuous. You have to take it an hour before and surely that ruins the moment, having to time the pill. When’s the right moment to take it out or tell the lady you’re with?

‘It must be awkward for the woman too, for the guy to slip out to the toilet to pop the Viagra. It’s a very bizarre situation and that’s can’t be good for the love life.

‘And the pills aren’t that cheap, I think £20 for four. I saw the sign in Boots and was surprised to see the advert in a high-street.

‘I’ve been with my GP all my life and I think she’d be surprised to see me in asking for those pills.’

Ollie, a manager for an audio visual company, from Surrey, said: ‘I’ve never needed to use it, but I suppose if there was an issue and you required it’d be alright.

‘I think it’d be more embarrassing going to the shop than to the GP to get Viagra though. I’d feel like a 15-year-old boy trying to buy cigarettes.

The 31-year-old, who didn’t reveal his last name, added: ‘At least at the doctors it’s a bit more professional.’ 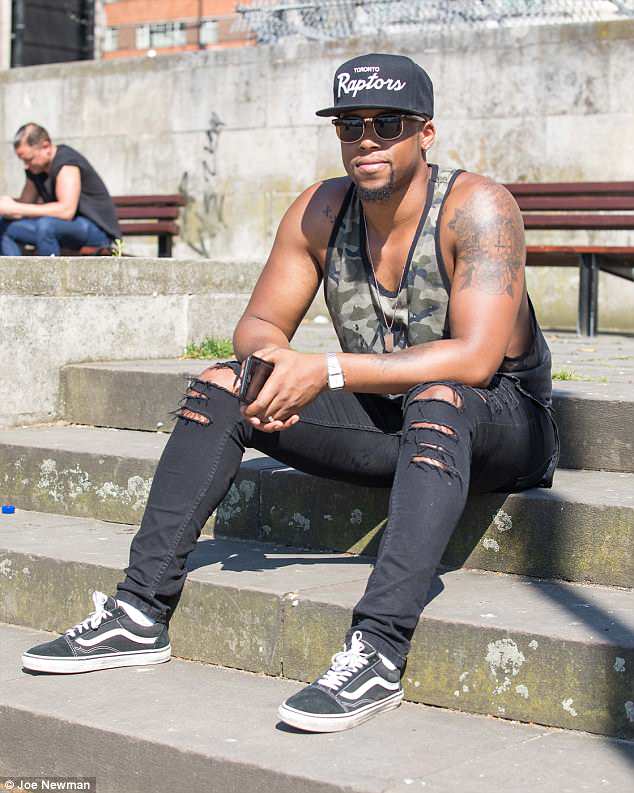 Michael-Ross Povoas, 26, from Gravesend in Kent, said he had never tried Viagra because he has no problems in the bedroom

WASN’T VIAGRA SUPPOSED TO BE A HEART PILL? 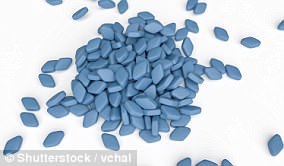 Research scientist Dr Mike Wyllie was head of biology at the pharmaceutical company Pfizer during the development and launch of Viagra in the 1990s. He is still a consultant for the firm today.

He said: ‘Viagra – as it’s used in its current form – was an accidental discovery.

‘The drug was originally designed to help angina but an unexpected side effect was that the men trailing it were getting erections.

‘As well as dilating their coronary blood vessels, as expected, the drug was acting on the blood vessels in the penis.

‘And Viagra very nearly didn’t happen at all. In fact it was very nearly shelved for being morally wrong: there were concerns over “selling sex”. And very few people thought there was a market for it.

‘Back in the early 1990s, erectile dysfunction, or impotence, as it was more commonly known, was not considered a problem. Or certainly not one that was ever talked about.’

Dr Wylie added: ‘And the vast majority of people thought it was “all in the mind”. GPs said patients didn’t mention it, but then they also never asked about it, not like today.

‘Viagra’s biggest achievement in the past 20 years has been to put the very embarrassing, but very widespread problem of erectile dysfunction on the map, and that can only be a good thing.’

WHAT IS VIAGRA CONNECT?

Viagra has been sold over-the-counter in the UK since the end of March for less than £5 a pill.

The landmark move came after health officials reclassified the little blue pill that ‘helps you get and keep an erection’ last year.

Viagra Connect was available to men with erectile difficulties in Boots first, before it was rolled out to other pharmacies earlier this week.

A four-tablet pack will cost £19.99 while men can get hold of eight tablets for £34.99, providing they meet strict medical criteria.

Manufacturer Pfizer said Viagra Connect is the first pharmacy medicine for erectile dysfunction to be made available without prescription.

Before the move, in Britain getting access to the drug was only ever been available with a prescription from a doctor.

Erectile dysfunction affects 52 per cent of men aged between 40 and 70, and demand for the drug saw Pfizer’s share price double within days of its launch.

Many men turned to the internet to buy supplies of the drug, often buying illegal or counterfeit versions from overseas, putting them at risk of taking dangerous fakes.

The Mail broke the news last March that officials would discuss making Viagra available over the counter, to significantly expand access to the drug.

‘There’s a bit of stigma’

Michael-Ross Povoas, 26, from Gravesend in Kent, said he had never tried Viagra because he has no problems in the bedroom.

The marketing manager said: ‘I don’t think I even know anyone who’s used it.

‘But I guess if they don’t have to go to the GP and can just ask over the counter that’s good.

‘There’s a bit of a stigma with it being an old man’s thing but I think it’s more associated with erectile dysfunction.’

‘Putting a chemical substance into your body’

John, a venue manager, from Brixton said: ‘There’s side effects to using Viagra that I wouldn’t want to deal with.

‘It is putting a chemical substance into your body.’

The 34-year-old, who didn’t want to reveal his last name, added: ‘I think it effects your blood pressure which I wouldn’t want to risk.

‘My girlfriend works for the NHS and she wouldn’t be happy with me taking the pills, especially as I don’t need too.’

‘It’s not a recreational drug’

Andrew, a finance director, from London, said: ‘I don’t know anyone who’s used Viagra in the past.

‘People are more likely to have issues with erectile dysfunction as they get older, and if they need it then they should be able to get Viagra.’

The 49-year-old, who didn’t reveal his last name, added: ‘To me it’s a medicine, not a recreational drug.

‘Buying the medicine in a shop will definitely be easier than having to go to a GP.’ 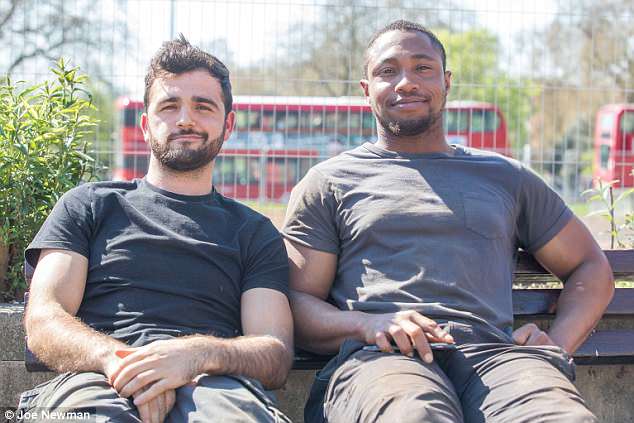 Sam Sowah, 24, a steel fixer, from London, said he has a friend who sells Viagra but he hasn’t used the pills himself (pictured with a different friend Netush Gjabri, 25)

‘I would never use it myself’

Sam Sowah, 24, a steel fixer, from London, said he has a friend who sells Viagra but he hasn’t used the pills himself.

He said: ‘One friend I have sells Viagra and another takes it quite often – they rave about it.

‘If you’re young it’s not something you think about too often.

‘I’ve never used it myself but I wouldn’t, even now it’s in shops. Maybe older people would though.’

A change of attitudes

Eddy Baland, 50, a police officer, from Bordeaux in France, said people are changing their attitudes to Viagra now.

He said: ‘There is a new way of thinking, it’s becoming more normal and talked about. It’s becoming regular to use. 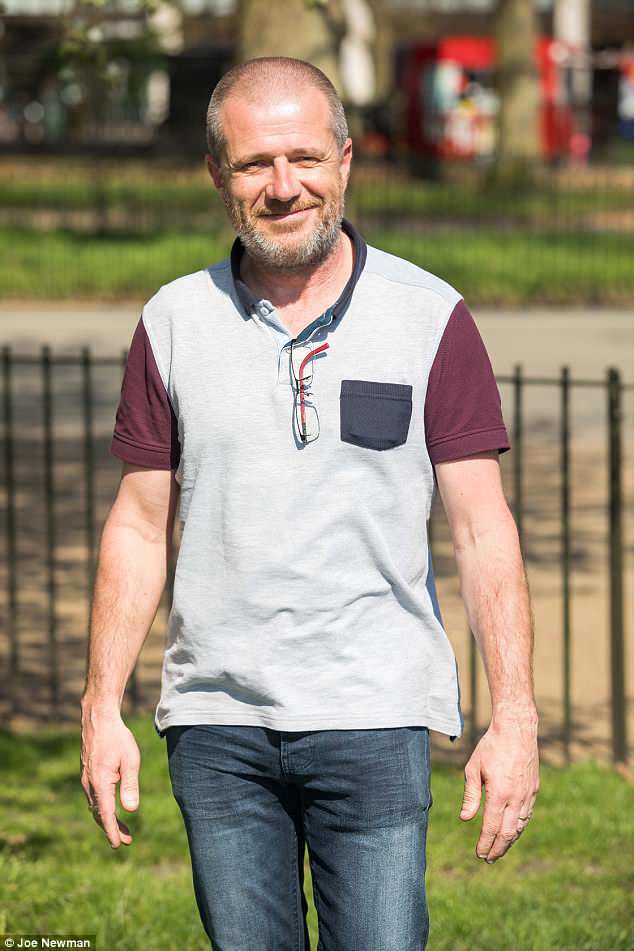 DID YOU KNOW THIS ABOUT VIAGRA?

Viagra was developed in 1998 by accident, after scientists discovered it had benefits for sufferers of erectile dysfunction.

Manufactured by Pfizer, the magic blue pills are taken by more than one million men in Britain each year, figures suggest.

Most users are in their early to mid 50s, but younger people are starting to take the drugs more often, the pharmaceutical previously said.

But since its patent expired, rivals have made generic versions containing the same active ingredient, priced at around £1.45 for the same amount of capsules.

Celebrities such as Hugh Hefner, the founder of Playboy magazine, and Hollywood actors Ben Affleck and Ashton Kutcher have previously admitted using Viagra.

‘I’ve never used it myself, but you have to go to your GP in France to get the pills – and I’ve never needed them.’

John, who only wanted to reveal his first name, admitted he tried Viagra once, when he was 15.

The 19-year-old, from Essex, said: ‘My friends used it and I was definitely influenced by them. I only took half a pill.

‘I wouldn’t do it again though. It’s bad for your health and I don’t think it should be legal.

‘Even my uncle used it regularly but I guess as you get older maybe you do need the help more but you’ve got to worry about your health.’

The carer added: ‘I’d also worry about taking Viagra as there is a lot of fake stuff going around. Like people saying they’ve got the pills but really it’s something else.

‘I know people who take cocaine and then Viagra on top to get in the mood – it’s just really dangerous.’

‘I always thought it was for older men’

John’s girlfriend Angelica, also 19, who is a waitress, said she didn’t know he’d taken Viagra in the past.

She said: ‘I don’t really know much about it. I’ve always thought it’s for older men.

‘I do think it’d be awkward to talk about for some couples though. Just depends on how close they are.’