Senior staffers in Gladys Berejiklian’s government have shed light on what it was really like to work alongside the ousted premier who was forced to stand down amid a cloud of corruption.

The former NSW leader has remained an immensely popular figure even in the wake of her shock departure from office on October 1.

She has continued to harbour huge support from well-wishers for her handling of the Black Summer bushfire crisis and the Covid-19 pandemic.

But her legacy is now hanging in the balance as the Independent Commission Against Corruption prepares to investigate how millions of dollars worth of taxpayer funds ended up in her disgraced secret lover’s electorate.

Despite the controversy, those who worked with her say she is a ‘genuinely decent person’ who led the state through some of its ‘darkest days’.

Jonny Heron, who was the head of Operations and Advance for the NSW Premier (pictured together) described how she personally phoned the families of bushfire victims while she was touring the hard-hit regions in the summer of 2019-20 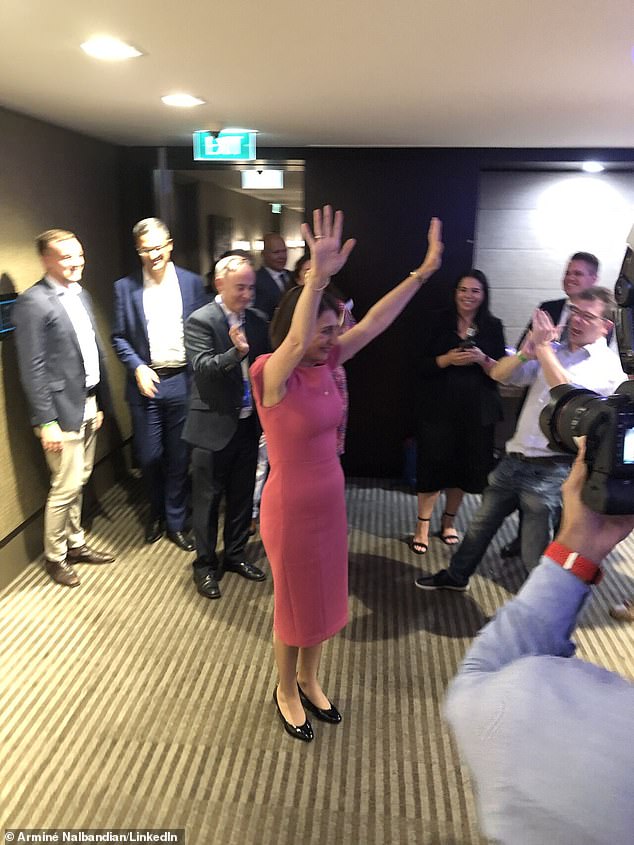 Despite the controversy, those who worked with Gladys Berejiklian (pictured after wining the 2019 state election) say she is a ‘genuinely decent person’ who led the state through some of its ‘darkest days’ 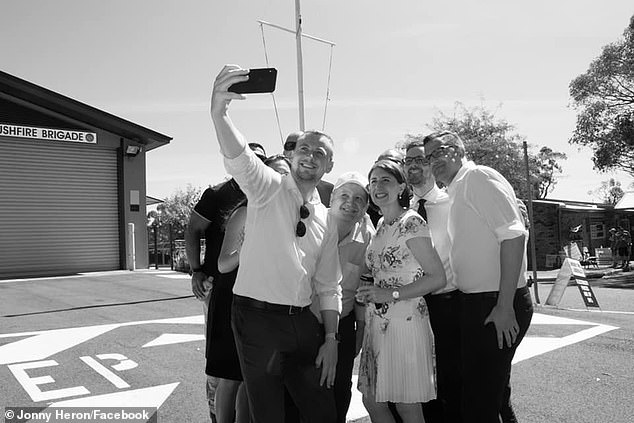 Jonny Heron, who was the head of Operations and Advance for the NSW Premier, described how she personally phoned the families of bushfire victims while they were touring the hard-hit regions in the Summer of 2019-20.

‘On one trip to an area torn through by bushfires she met a number of residents who were unable to contact family to let them know they were safe due to the fires destroying cell towers,’ he said.

‘She took down the names and contact details of the family members. As our trip continued on reaching an area with service, she personally called all of them to let them know their relatives were safe.’

Mr Heron said it was an honour and a privilege to work with the ‘fiercely loyal, caring and great to be around’ leader who never shied away from her constituents.

‘If there was ever a stakeholder being excessively rude and she overheard, she would promptly throw herself straight into the middle of the situation. “Don’t talk to my staff that way. You can talk to me instead”.’

But things didn’t always go to plan for Ms Berejiklian and her team of bureaucrats. 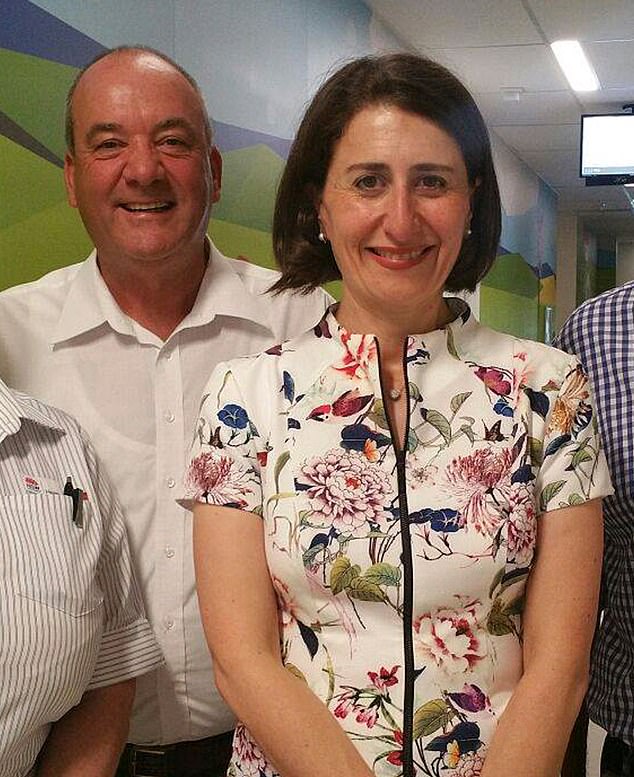 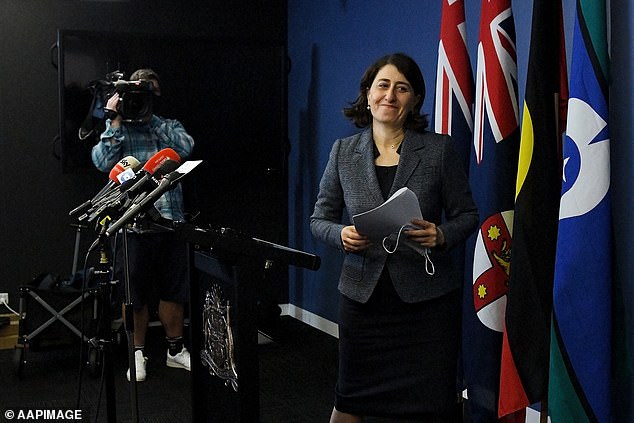 Things got off to a very bad start on election night in 2019 when he and the boss arrived at a hotel and headed up to their suite to watch the results start rolling in.

‘The lift started moving but came to a sudden stop. We were trapped in a lift on election night,’ Mr Heron recalled.

‘In a display of over-confidence in my abilities, Glad instinctively looked at me as if to say “fix it”.’

‘Lucky for us the breakdown (both the lift, and the mental one I was going through) was brief,’ he joked.

Part of Ms Berejiklian’s popularity stems from the fact she was ‘not your typical politician’. 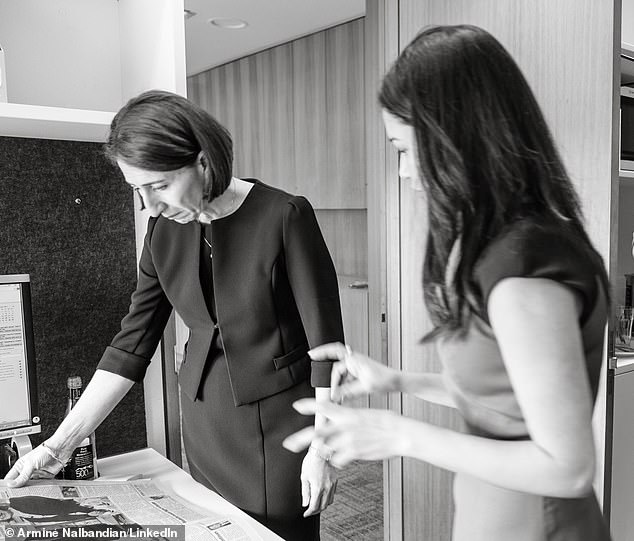 Arminé Nalbandian, the deputy chief of staff and director of policy to the Premier of NSW said the former premier (pictured together) taught her three lessons about working in public service that she will never forget 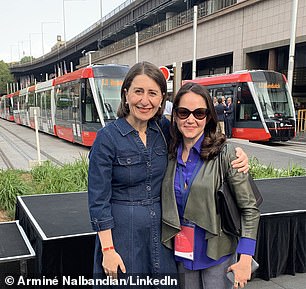 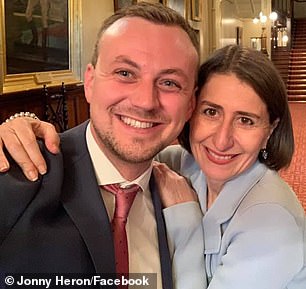 What Gladys Berejiklian taught a top staffer about public service:

Deputy Chief of Staff and Director of Policy to the Premier of NSW, Arminé Nalbandian, says this is what the former premier taught her about public service:

1. Work harder and smarter than everyone else, be persistent and always come prepared. If you do, you will find a way through any seemingly intractable challenge.

2. Govern for everyone. It’s your job to understand what it means to represent the views of the citizens you serve. Never take the people you serve for granted, you govern at their behest and that is the ultimate privilege.

3. Leadership isn’t about popularity and it’s not about perfection. It’s about making the best decisions based on the available facts and then holding your nerve. It’s also about apologising when you get it wrong.

Arminé Nalbandian, the deputy chief of staff and director of policy to the Premier of NSW said although she made miscalculations throughout the pandemic, ‘she entered our lives and our living rooms, and spoke directly to us. She never stood on ceremony’.

‘Gladys told it straight and she did so while leading us through some of our darkest hours as a nation. She was a politician we could like,’ Ms Nalbandian said.

As the October 18 ICAC hearings threaten to strip away her legacy and destabilise the NSW Liberal Party, Ms Nalbandian said she’s still proud to have worked on reforms that will ‘impact lives for generations’.

‘I am proud of the infrastructure that has transformed the city and state I first encountered when I arrived in Australia ten years ago,’ she said.

‘Most of all, I am proud of my dear friend, this remarkable woman, for her spectacular leadership.’

She said the former premier taught her three lessons about working in public service that she will never forget.

The first being to ‘work harder and smarter than everyone else’, the second is to ‘govern for everyone’ and the third is to not focus on ‘popularity or perfection’.

Mr Maguire had previously been accused of abusing his public office before admitting to being involved in a cash-for-visa scheme and seeking secret commissions for brokering property deals.

In August it emerged that Ms Berejiklian showed ‘interest’ in a proposed $5.5million grant for a shooting association clubhouse and conference facility in his electorate, despite the proposal being repeatedly knocked back, documents show.

The Australian Clay Target Association funds as well as another grant involving the Riverina Conservatorium of Music, also in Wagga Wagga, will be probed by ICAC when the hearing gets underway later this month.

Ms Berejiklian has denied any wrongdoing and maintains no special treatment was given to the proposals. 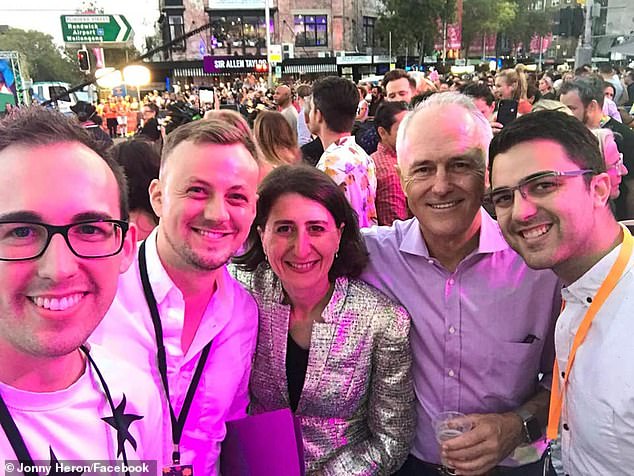 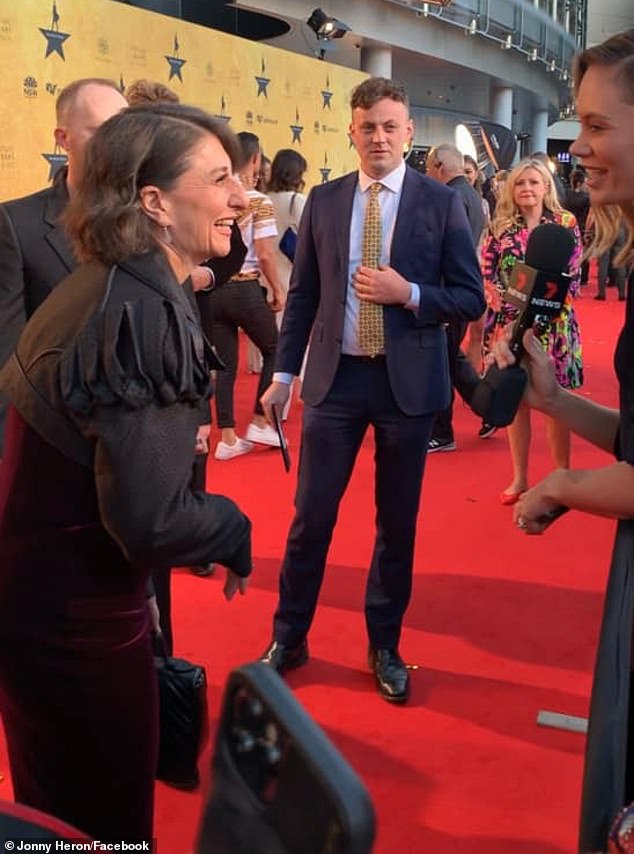 Pictured: Ms Berejiklian shares a joke with a Channel 7 news reporter on the red carpet

Gladys Berejiklian has resigned as NSW premier after the state’s anti-corruption watchdog announced she was under investigation for breach of public trust.

Gladys Berejiklian’s four-and-a-half year stint as NSW premier has come to a close after the state’s anti-corruption watchdog announced she was under investigation for potential breaches of public trust.

Ms Berejiklian will also resign from NSW parliament as soon as a by-election for her north Sydney seat of Willoughby can be held.

NSW’s Independent Commission Against Corruption said in a statement on Friday it was investigating whether Ms Berejiklian “exercised public functions” in a position of conflict between her public duties and private relationship with ex-MP Daryl Maguire, revealed in late 2020.

A wearied Ms Berejiklian said on Friday she could not temporarily step aside while ICAC conducted its investigation and then resume the premiership.

She agreed that as premier she was obliged to resign while under ICAC investigation, but again denied any wrongdoing.

She also said her resignation “could not happen at a worse time” as the state prepares to leave COVID-enforced lockdowns in the coming weeks.

“History will demonstrate that I have always executed my duties with the highest degree of integrity for the benefit of the people of NSW who I have had the privilege to serve,” Ms Berejiklian told reporters.

“The people of NSW need certainty as to who their leader is during these challenging times of the pandemic … I cannot predict how long it will take the ICAC to complete this investigation, let alone deliver a report.”

The premier did not take questions from journalists but thanked COVID frontline workers, the Liberal Party, her family and constituents.

Ms Berejiklian will remain premier until the NSW Liberal Party elects its new leader and the state’s new premier, with Dominic Perrottet a frontrunner.

It plans to look into whether Ms Berejiklian’s relationship with Mr Maguire, then the Wagga Wagga MP, affected those arrangements and constituted a breach of public trust or partial exercise of official functions.

ICAC will also investigate whether Ms Berejiklian should have “suspected on reasonable grounds” that Mr Maguire may have engaged in corrupt conduct, and thus failed to report him to ICAC as required.

It will look into whether she “was liable to allow or encourage” his conduct.

Mr Maguire is accused of abusing his public office between 2012 and 2018.

The former state MP is accused of using his public office and parliamentary resources to improperly gain a benefit for himself or for G8way International, a company Mr Maguire allegedly “effectively controlled”.

Mr Maguire quit the government in 2018 after a separate ICAC inquiry heard evidence he sought payments to help broker deals for property developers.

The pair’s five-year relationship was kept secret until Ms Berejiklian disclosed it at an ICAC hearing on Mr Maguire in October 2020.