What happens to our bodies during our TIME of the month?

What your periods REALLY do to your body: Expert reveals how hormones affect everything from bowel movements to making your hair greasy

We all have have different PMS symptoms including stomach cramps, bad skin or mood swings – now an expert has revealed why.

Dr Belinda Griffiths, from The Fleet Street Clinic, in London, reveals exactly what happens to our bodies before and during our time of the month – and why some of us may experience different symptoms.

The advice comes a study showed that just under half of us are affected by PMS, and in particular the way they change our moods.

The doctor reveals that PMS symptoms are due to hormonal fluctuations and are ‘hugely variable’- with some of us being affected by testosterone – which controls appetite and concentration levels.

While others could be affected by progesterone levels which control bowel movements, and also increase the level of sebum in the hair and face – sometimes producing acne.

A doctor reveals that PMS symptoms are due to hormonal fluctuations and are ‘hugely variable’-  with some of us being affected by testosterone – which controls appetite and concentration levels. Stock picture

As well as bleeding we have to deal with changes in our bowel movements – so why does it happen?

‘Progesterone, which is a hormone realeased prior to your period, causes the relaxation of smooth muscle – which leads to constipation with bloating prior to the period,’ Belinda reveals.

‘The opposite effect happens when the level drops as bleeding commences, which can cause diarrhoea.

Belinda also explains that progesterone increases the production of sebum in the skin.

‘This is an oily, thick substance which lubricates the skin. This, in some women will produce a healthy glow and in others will produce acne, as the skin’s pores become clogged due to excess oil,’ she said.

How do hormones change the body?

Dr Griffiths explains how hormones work before and during your period…

‘In the last half of the menstrual cycle and in the week prior to menstruation, the level of progesterone increases then dramatically reduces, just before the period starts.

‘Oestrogen peaks mid-cycle then also drops premenstrually. Testosterone is thought to remain at the same level and prostaglandins are released, which cause painful uterine contractions to expel the lining of the womb, in the form of blood. This is often referred to as period pains.

‘These hormonal changes explain the symptoms which occur in the week before bleeding commences and as mentioned, are different in all women.

‘They also vary in the years leading up to the menopause, characteristically getting worse in the late 30’s and 40’s as the levels fluctuate in an unpredictable way.’

‘This increase in sebum production will also cause the hair to appear to be greasy as the oil has an effect on the hair roots, so more frequent washing is needed.’ 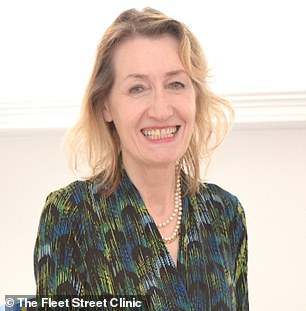 Dr Belinda Griffiths (pictured) from The Fleet Street Clinic, in London, explains exactly what happens to our bodies when we have our period

We all throw the word PMS around – associating it when someone who’s in a bad mood. But studies show that mood swings are related to hormone changes, during and before menstruation.

Belinda said: ‘These are subjective, varying from person to person. And are accentuated if a woman suffers from anxiety and depression.

‘The mechanism is unknown, but a definite association exists, which is thought to become worse with age.

‘Anger and aggression are likely to be increased, not just due to progesterone but possibly due to the relative increase in testosterone, with lower opposing levels of oestrogen and progesterone.

‘While tension and irritability are increased, appetite may be affected, and concentration may be poor.’

Another annoying side effect of your period is breast tenderness – normally just before you come on, and Belinda explains that this is down to, again, the progesterone hormone in your body.

‘The hormone stimulates the milk glands, causing them to feel sore and swollen,’ she explained.

HOW TO IMPROVE PMS

Sleep improves all symptoms, try to get to bed earlier and not become exhausted.

Do not smoke –  in all studies, women who smoke suffer more PMS symptoms.

Cut down on caffeine, salt and sugar in the week before the period to try to minimise the symptoms, especially bloating and headaches.