What is an IVA? Debt solution marketed as a life hack on social media

‘Write off 85 per cent of your debt from as little as £75 a month. ‘Thousands of Brits in debt are qualifying to have 75 per cent written off. ‘People who owe £6,000 or more need to find out more about a little known regulation that the debt collectors probably don’t want you to hear about.’

These are just three examples This is Money found with a quick a search online – it appears the Individual Voluntary Arrangement is being billed as the latest life hack to solve your money woes.

Recent figures show record numbers are taking them out, perhaps lured in by these types of adverts, or maybe via social media or word-of-mouth.

Too good to be true? Put the words IVA into Google and you’re greeted with ads offering to help you get out of debt and write some of it off – but this shouldn’t be considered debt advice

Insolvency Service statistics found that last year the highest number of people since 2011 went insolvent, 61.6 per cent of whom used an IVA to do it.

The growth in insolvencies was principally driven by a spike in IVAs, which rose 20 per cent year-on-year to 71,000, the highest ever recorded.

Stuart Frith, president of insolvency and restructuring trade body R3 blamed the increase in insolvencies on the tightening of credit and rising costs.

When it comes to the rise in IVAs specifically, Peter Tutton, head of policy at StepChange Debt Charity, said: ‘The record high number of people entering into IVAs represents a continuation of the rising trend we have seen in recent years.

‘There is no one clear reason for the record numbers, however it is likely to be a combination of higher numbers of people seeking or being recommended IVAs, and an increase in people experiencing the conditions which would lead to seeking an IVA.’

But what is this three letter acronym, and are you at risk of being sold one in your search for debt advice, even if it’s not the right option for you?

What is an IVA?

An IVA is a form of debt solution that is a formal and legally binding agreement made with your creditors to pay off your debts over a set time period.

According to Citizens Advice, IVAs normally collate debts including bank loans and overdrafts, credit card loans and personal loans, but can also include secured loans and council tax bills.

Your creditors will be unlikely to agree to an IVA unless your total debt is more than £10,000.

IVAs must be set up by a registered professional Insolvency Practitioner, who will charge a fee for the arrangement and will deal with your creditors throughout the IVA, which often lasts around five years.

If the monthly payments you make into the IVA are not enough to pay your debts off in full, then the rest will be written off – which is what many of the adverts mentioned above like to highlight.

What are the potential pitfalls?

Debt charities like StepChange, the Insolvency Service, and the Financial Conduct Authority have all raised concerns within the last six months about the way that IVAs are sold and marketed.

The most obvious reason for that is IVAs are not a one size fits all solution for everybody, and it’s certainly not a life hack – it has risks.

Savings and personal pension payments will usually be used to pay your creditors, it may affect your job and you might have to remortgage your home if you own one.

What’s more, if your circumstances change you could struggle to keep your IVA payments meaning the arrangement could fail and you could be made bankrupt.

It could also impact your credit score. Citizens Advice says that people with an IVA might find it difficult getting credit in the short term, while getting more than £500 of credit requires you to get written permission from your insolvency practitioner, unless the credit is for public utilities.

Longer-term, it’s likely to have an impact even once the IVA has finished. Details of IVAs are kept in a public register called the Individual Insolvency Register. Your IVA will stay on that register for the length of the IVA, and removed three months after the IVA has ended.

Much of this is not revealed in the advertising.

Jane Tully, director of external affairs at the Money Advice Trust, the charity that runs National Debtline, echoed this and told This is Money: ‘This kind of advertising is leading people in debt down routes that may not be suitable for their situation – in particular, people with a small amount of spare income who may be eligible for a debt relief order or bankruptcy instead.

‘This is undoubtedly a factor behind the rise of IVAs we are seeing. The free debt advice sector is often left to pick up the pieces, helping people to recover their financial situation after these inappropriate IVAs fail.’

Particularly in the spotlight are so-called ‘introducer’ or ‘lead generating’ firms, the companies that market those ads promising to write off your debt, often claiming to be ‘government approved’ and often masquerading as debt charities. 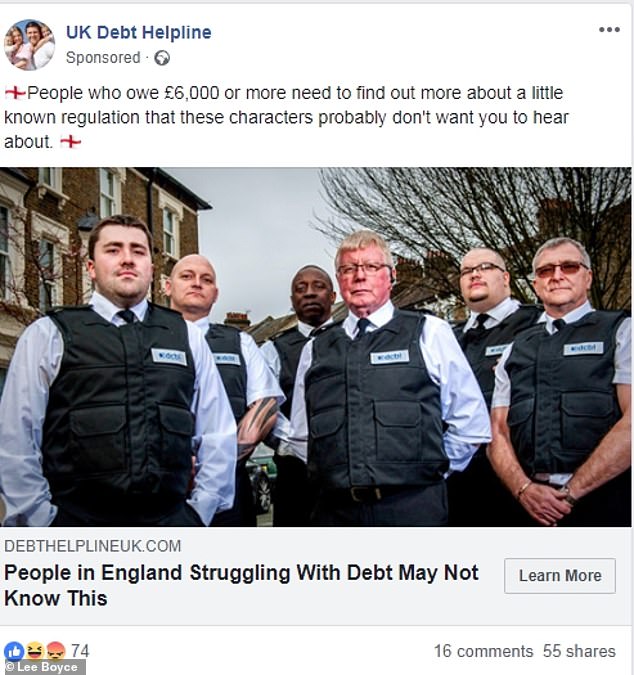 Peter says of these: ‘We continue to see online ads from “lead generators” that make misleading claims or try to pass themselves off as a charity brand.

‘This is unacceptable in itself, but we are worried that vulnerable people seeking help with their debts may be poorly treated and not get the help they need from firms prepared to use poor marketing tactics.’

These firms then pass you on to IVA providers, often on commission.

Because they make their money from referring debtors to providers, there is often a commercial incentive to recommend someone an IVA, regardless of whether or not it is the most appropriate solution.

In the small print at the bottom of one website advertised on Facebook, debthelplineuk.com, it states: ‘At Debt Helpline UK we do not give advice.

‘On completion of our form, we will introduce you to one of our authorised debt solutions partners.’

If you read the small print these ads state that despite sometimes masquerading as debt charities and slapping on a ‘Money Advice Service’ badge, they’re not there to give you advice

Filling in a quick form providing your debt, number of creditors, employment status and how much you could afford to pay back per month on the website is enough to return you a result saying you are eligible and could immediately speak to an ‘adviser’, although it doesn’t say where from.

Both the FCA and Insolvency Service have recently raised concerns about these firms, as well as the ‘volume IVA’ providers which debtors are often referred to.

A report this month from the Insolvency Service found that 10 providers accounted for over 80 per cent of new IVAs registered last year. 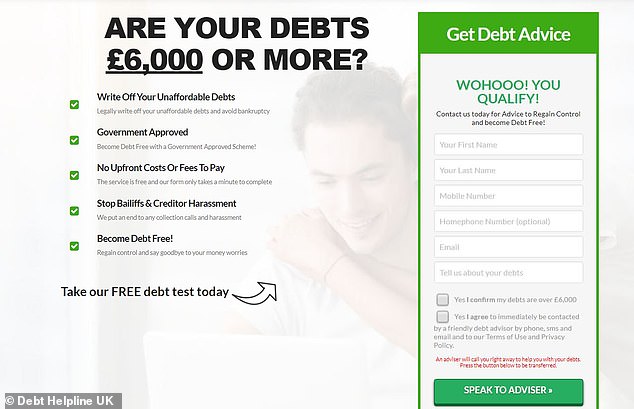 Sites also aren’t especially rigorous with their checks, filling in a few details quickly offers you the opportunity to ‘speak to an adviser’ – one who might be paying them commission

In the same report, the Insolvency Service concluded that ‘the quality of advice given to debtors by introducer firms and the checks volume IVA providers carry out once debtors are put in contact with them is questionable in some cases’.

It added it had identified examples ‘where it would appear that some debtors may not have been given full and appropriate advice – debtors are being steered towards an IVA without being adequately advised about the options available.’

In a letter addressed to the chief executives of debt packager firms at the start of October last year, the FCA wrote that it had ‘concerns’ that the business model of debt packagers had ‘the potential to cause harm to customers’, and that ‘the incentive to increase revenue streams could be a driver for a poor conduct culture in which firms may prioritise an IVA referral over a more appropriate solution.’

Who could you be being referred to?

Many of these Google ads disclose little to any detail about who set them up or even where they lead to.

In fact, Peter says that many of these ads are just cheap sites ripping off the name of actual debt charities.

He said: ‘In the past year alone, StepChange reported over 50 instances of trademark infringement to search engines, all of which were upheld, which highlights the scale of this problem.

‘However, dealing with these problems one-by-one is like a never ending game of whack-a-mole, as when one is removed more simply pop up.’

Some sites however are more transparent when it comes to telling you where you are being referred to.

An ad for one site, ‘becomedebtfree.co.uk’, states: ‘An IVA Debt Solution could qualify you to get up to 80 per cent Of Your Debts Written Off!’ 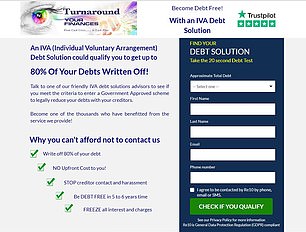 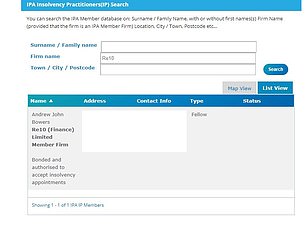 One of the ads This is Money found, for a site called ‘becomedebtfree.co.uk’, was actually set up to refer users directly to an professionally accredited Insurance Practitioner

He told This is Money: ‘I agree it is annoying that there are private lead generation firms who generate IVA leads on the internet so that they can sell them to IP firms.

‘It is also annoying that there are lots of firms operating as authorised representatives of FCA regulated companies advertising in a similar manner, providing advice and steering clients toward one of the IVA volume firms who pay commissions of up to £1,500.

‘My firm doesn’t take any leads whatsoever from such introducers as we’ve found that they tend to mislead people into doing IVAs when other solutions might be more appropriate.’

He added he was not ashamed to advertise the fact his West Yorkshire firm administers IVAs, and that he chose to do his own advertising rather than employ the services of a firm driven by commission, which he said ‘must be wrong’.

‘We only recommend an IVA as being an appropriate debt solution if that is in fact the case’, he said.

In a subsequent email, he added that he’d previously made complaints to the FCA about introducer firms, but that they ‘simply aren’t interested’.

This is Money put this allegation to the FCA but at the time of publication, did not receive a response.

But given that IVAs can only be set up by registered practitioners, that means debtors who are likely vulnerable or looking for advice could still be being taken advantage of by these introducer firms.

Firms which make money by passing people on to registered and accredited practitioners, who are then making money in fees off of the same people in debt, regardless of whether an IVA is the right solution for them.

Michelle Thorp, chief executive of the Insolvency Practitioners Association, said: ‘We are aware of the concerns regarding introducer firms and have implemented new regulatory measures to strengthen monitoring of IVA volume providers, which will enable us to address any concerns immediately, including issuing sanctions where needed .

‘If insolvency practitioners are found to have advised an individual to use an IVA when another personal insolvency procedure would have been more appropriate, then that should be reported to the regulator through the Government’s complaints gateway.’