What lungs look like after smoking ONE pack of cigarettes

A YouTube user has shared a shocking video showing the damage to your lungs and throat that is caused by smoking just one pack of cigarettes.

Chris Notap carried out his own experiment to mimic the effects on the body in the hope it will encourage people to quit for good.

He fills a jar with cotton wool balls and uses a suction pump to suck the smoke from cigarettes which is pulled through the jar.

After 20 cigarettes are ‘smoked’ through the make-shift ‘lungs’, the cotton balls are left a revolting brown colour from the toxic chemicals.

The clip also shows the pump’s tube, which represents the throat, clogged with a sticky brown gooey tar. 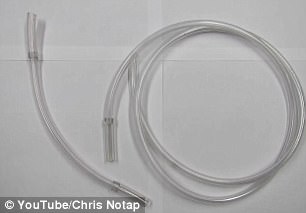 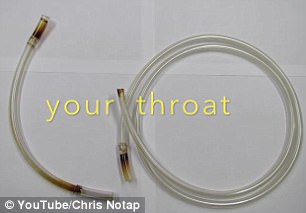 Around 9 million adults in the UK have the habit: 19 per cent of men and 15 per cent of women. Two thirds of smokers start before the age of 18.

Smoking is the leading cause of preventable illness, causing more than 480,000 deaths each year in the US and 100,000 in the UK.

These include nicotine, tar, and carbon monoxide, as well as formaldehyde, ammonia, hydrogen cyanide and arsenic. 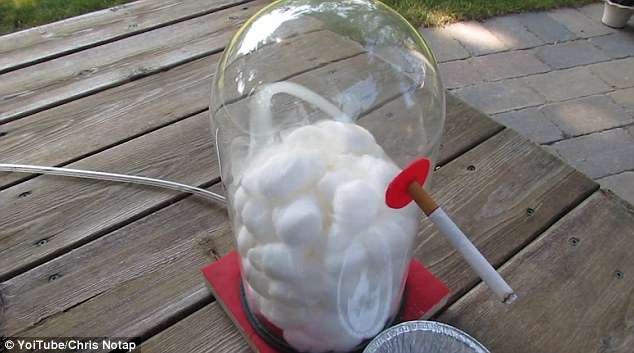 ‘Waiting another day could be too late’

Chris wrote on his YouTube channel: ‘I decided to do my own small test with cotton balls to determine the real effects of smoking a pack a day and what it does to your mouth, throat and lungs.

‘Not to mention how it compromises every system in your body, in order to try to tell you to stop smoking and stop slowly killing yourself. 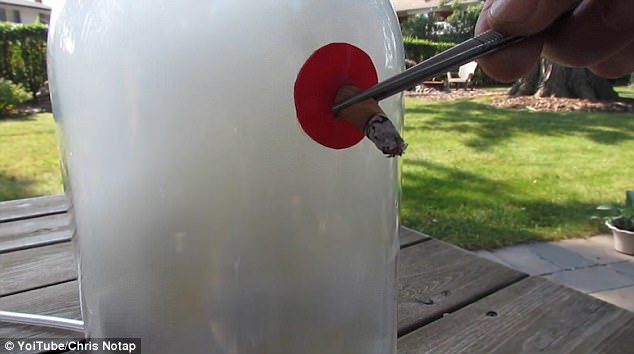 ‘The effects of smoking on your body is no secret and if you don’t know by now, here is another reason why you need to quit smoking.

‘It’s never too late to quit and once you see what a pack a day does to your lungs it will give you the fuel you need to fire up the will power and quit.

‘Good luck on your journey to quit smoking. Remember, waiting another day could be too late.’ 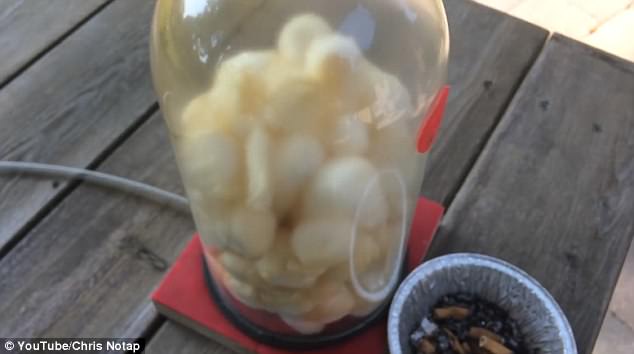 Third-hand smoke exposure can cripple your brain and liver, increase your risk of neurodegenerative diseases, and ruin your metabolism.

That is according to a study by researchers at the University of California, Riverside who saw significant health issues in people within a month of exposure to smoke.

The research team analyzed how people were affected by inhaling smoke from another person’s clothing, hair, home, or car.

Now, they have shown there is an impact on brain and liver tissues.

The findings suggest even non-smokers who live with smokers may be at risk of harm.

The video starts with Chris cutting open the tube that was used to suck the smoke through the jar.

He then wipes his finger on the inside of the tube to show viewers how it is covered in brown liquid, which he smears onto a piece of paper.

The inside of the jar can is covered in the same substance.

Smoking causes about 90 per cent of lung cancers.

It also causes cancer in many other parts of the body, including the mouth, lips, throat, voice box (larynx) and  oesophagus (the tube between your mouth and stomach).

It damages your lungs, leading to chronic obstructive pulmonary disease (COPD), including bronchitis and emphysema.