What makes Canelo Alvarez and Gennady Golovkin so special?

They are two of the most feared fighters on the planet.

Between them Saul ‘Canelo’ Alvarez and Gennady ‘GGG’ Golovkin have racked up 86 victories in 88 fights, losing only once and securing a chilling 67 knockouts along the way.

They collide at Las Vegas’ T-Mobile Arena on Saturday, in one of the most hotly-anticipated bouts of the past decade. But what makes the two fighters so special? How does it feel taking the best punches in their arsenal? Here some of their past opponents reveal what it’s really like sharing the ring with the two fighters. 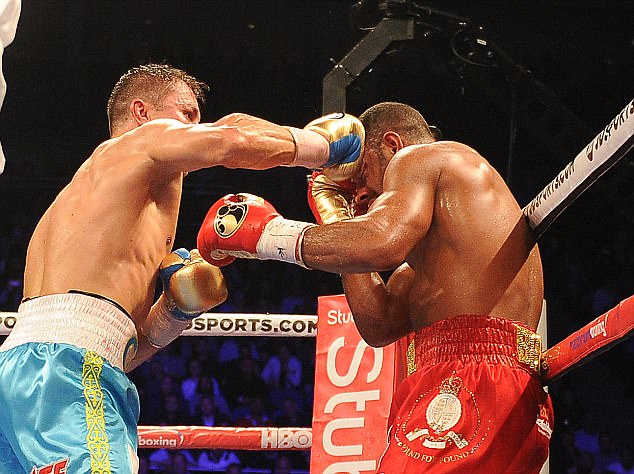 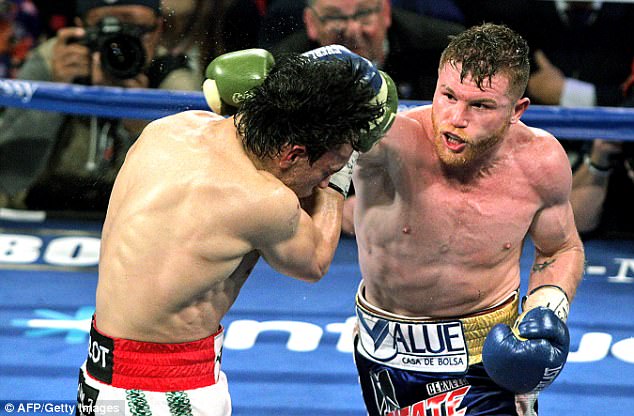 Mexian sensation Alvarez, meanwhile, has lost once in his glittering 51-fight, 12-year career

Matthew Macklin was stopped in the three rounds by Golovkin in 2013 courtesy of a body shot that left ‘Mack The Knife’ feeling ‘paralysed’:

‘He hits you with a jab and you think “f*** that is not normal”… you’re not wobbled but it hurts. I was so mentally prepared for him to hit hard but I was still like “oh now it is for real and I can’t take them all night”.

‘He is so technically good, he is so well balanced and his feet are so good… (but) his best thing is — you can’t really see it on TV, but you know when you’re in there — it is how well he judges his distance. 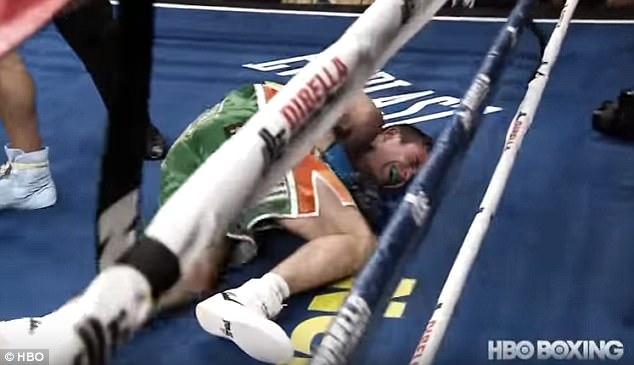 ‘He is constantly just there. You know you’re under threat so you’re burning up a lot of energy. When I had done two rounds I felt like I had done seven and I was in fifth gear going backwards.’

“He’s definitely the biggest hitter I’ve been in with. Definitely… it was like a thud. He definitely hits hard…

‘But he kind of just rode it out and kept coming out. He was a good fighter and it was an honour and a pleasure to share the ring with him tonight.” 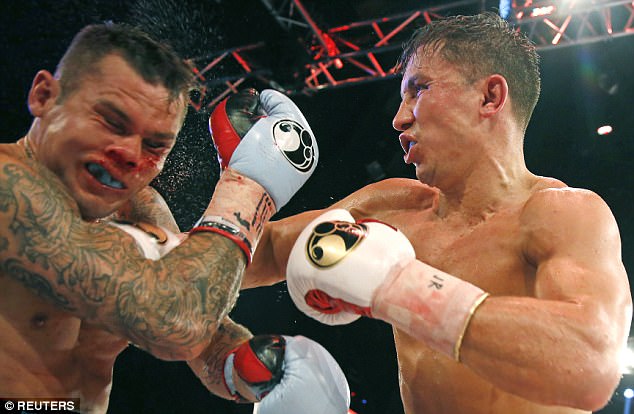 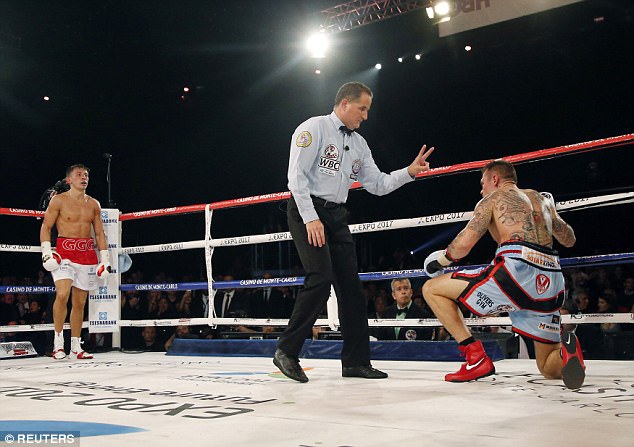 During a titanic showdown in March, Daniel Jacobs became the first man to take Golovkin the full 12 rounds.

The American was beaten by unanimous decision in a fight many felt he won and had shown that Golovkin was either past his peak or overrated:

‘With all due respect, Triple G is a great fighter, but just the way everyone made his power out to be and his skills out to be it’s a myth, a facade, smoke and mirrors…

‘He has a good jab, I’m not a guy who gets landed with a lot of jabs because of my range but he was able to land more than I’m normally hit with… (but) none of his jabs hurt… 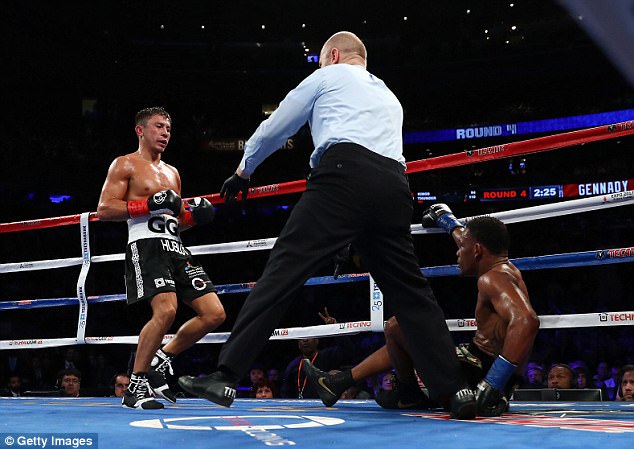 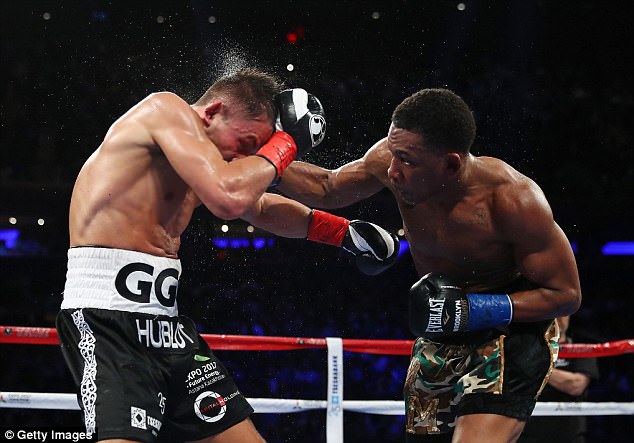 The American’s success, however, prompted people to suggest ‘GGG’ was past his best years

‘He’s a strong guy, he’s a heavy-handed guy but he’s not the most powerful guy that I’ve ever been in the ring with… the best thing he did in the fight wasn’t the pressure or the power it was maybe the jab.’

Amir Khan stepped up to 155lb to challenge for Canelo’s WBC middleweight strap back in May 2016. After enjoying early success, the Bolton fighter was laid out by a massive overhand right in the sixth round:

‘People say I can’t take a punch but with the shot I got caught by Canelo, I think he would have knocked a horse out…

‘Canelo is a lot faster than you really think he is and every shot he throws is a power shot. He’s very calm and relaxed and waits for his opportunity.

‘Just don’t let him settle and keep your distance and you will slowly start to frustrate him which is when he gets a bit wild and gives you the openings you are looking for. 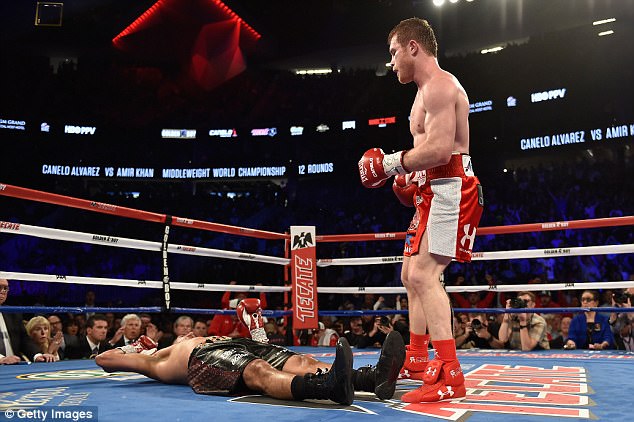 Liverpool’s Liam Smith suffered the first defeat of his career when he surrendered his WBO super welterweight title to Canelo in Texas in September 2016:

‘He’s a very good fighter. He was also very confident to let off his shots because he’s been at that level, I was a little more safety first.

‘He’s not a massive, massive puncher, he’s a solid puncher – which probably sounds a bit hypocritical as I got stopped. He’s a good fighter, a good person as well.’ 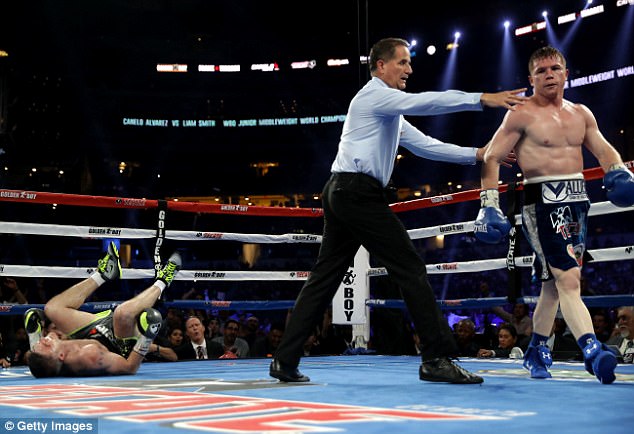 Matthew Hatton, brother of former two-weight king Ricky, was beaten by Canelo for the vacant WBC super welterweight title back in 2011:

‘Alvarez is unbelievably physically strong… that was certainly the hardest I’ve ever been hit and it was a painful night for me.

‘I remember at the weigh-in with Canelo thinking I’m about the same size as him. But then when he turned up for the fight he was like Popeye who had just eaten his spinach, muscles bulging and a lot bigger.

‘He was like a different man…. he’s so thick set.’ 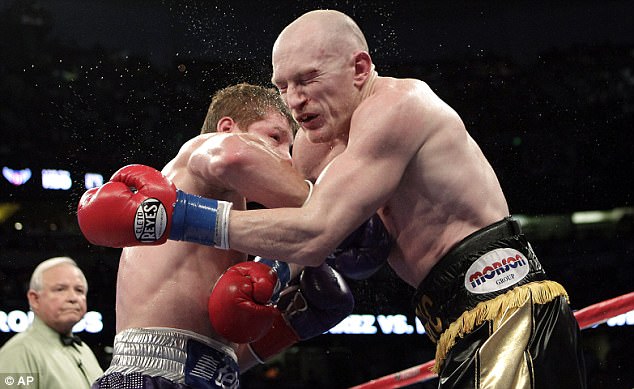 Matthew Hatton, brother of Ricky, went 12 rounds with Canelo in Anaheim back in March 2011 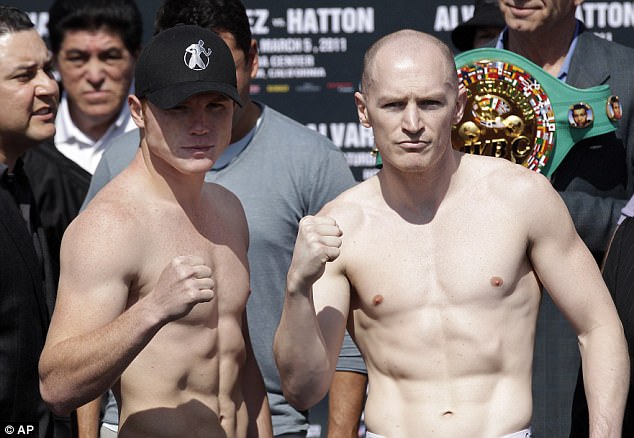