What on earth have Taylor Swift and Miley Cyrus got to do with the Curse of the Kennedys?

In America, this book was given the stately title The House Of Kennedy. Its UK publishers have gone for something more Hammer Horror, adding the words ‘Six Generations Of Adultery, Addiction And Tragedy’ on to the cover for good measure, to ensure no bookseller is tempted to hide it away in the American Politics section.

Just how many Kennedys are there? And are there really enough curses to go round? 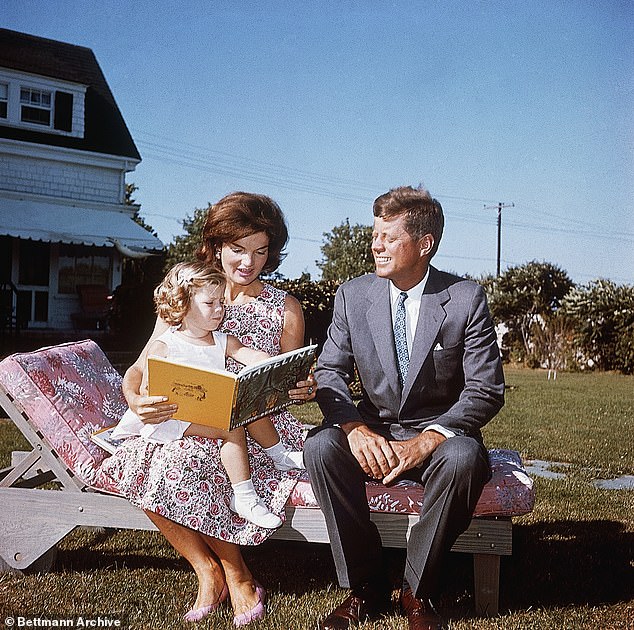 Then-Senator JFK with Jacqueline and daughter Caroline in 1960. The Kennedys of JFK’s generation seemed properly cursed

Obviously, we all know about the variously ill-fated lives of President J. F. Kennedy and his younger brothers Bobby and Teddy. But as the book goes on, there’s an endless supply of grandchildren and great-grandchildren, so that if one of them isn’t adulterous, addicted or tragic, there’s always another who will be.

By the end, there are more Kennedys than you would ever imagine. President Kennedy’s grim, pushy parents, Joseph and Rose, had nine children and 29 grandchildren. Most of their children’s children had children, and so on. Their son Bobby and his wife Ethel had 11 children and anything up to 33 grandchildren, for instance. 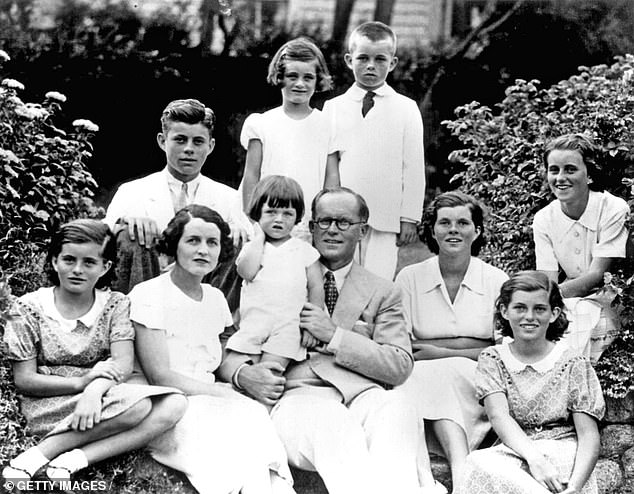 As the book goes on, the Kennedys multiply, and the authors spread their adultery-addiction-and-tragedy nets ever more widely, so that they include their wives’ siblings’ children and their grandchildren, too. Since Ethel was one of seven children, and most of those children had children, all the most adulterous, addictive and tragic of them are bunged in, too, to keep the numbers up.

At the age of 43, John F. Kennedy was not the youngest man to become President of the United States. Theodore Roosevelt was 42.

If ever the Kennedys fail to deliver, the authors start detailing any romantic activity, including dating and marriage. In one particularly breathless paragraph, they inform us that ‘The juiciest gossip stories involve Bobby Jr’s son Conor, who dates singer Taylor Swift in 2012 while he’s still a high school student at Deerfield Academy; his cousin Patrick Schwarzenegger (son of Eunice’s daughter Maria Shriver and Arnold Schwarzenegger, the movie-star-turned-politician), who has a relationship with pop star Miley Cyrus in 2015 – while his sister Christina Schwarzenegger simultaneously dates Miley’s brother Braison Cyrus; and their older sister, Katherine Schwarzenegger, is best known for marrying Chris Pratt in the summer of 2019.’

Whatever happened to the Kennedy Curse? By now, it feels very watered down. Dating Taylor Swift and Miley Cyrus may well have its drawbacks, but it’s surely a lot more fun than being assassinated.

The story begins with President Kennedy’s father Joe, whose own father had made a fortune, first in alcohol, then in finance, then in politics. ‘Win at all costs’ was the motto he handed down to his family. Joe was deeply unpleasant, virulently antisemitic and viciously ruthless against rivals. The authors even suggest he framed a business competitor on a rape charge, offering a young woman $10,000 to make false accusations, then rounding it all off by refusing to pay her. 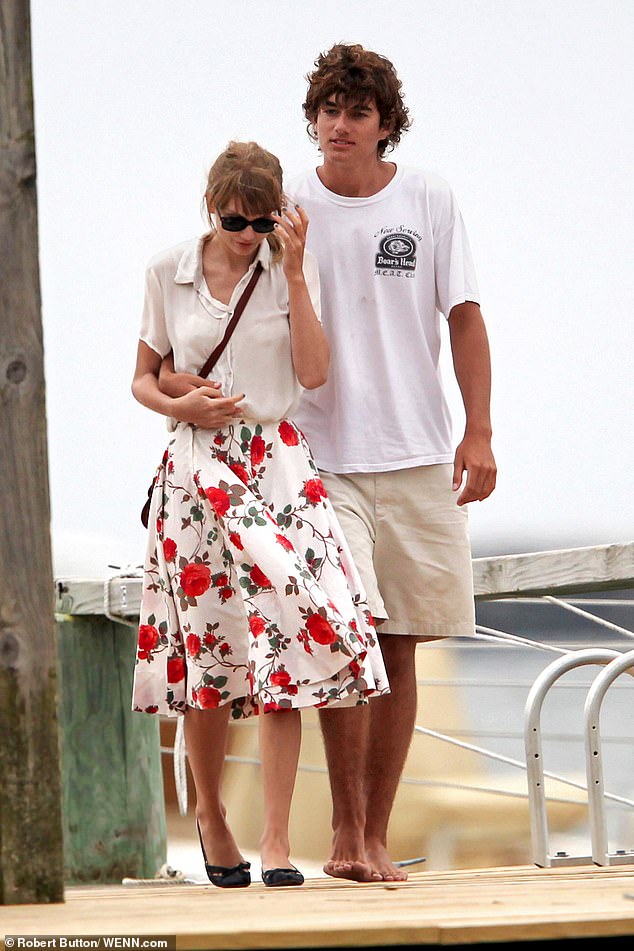 Conor Kennedy and Taylor Swift in 2012. If ever the Kennedys fail to deliver, the authors start detailing any romantic activity, including dating and marriage

Like his sons, Joe was sexually insatiable, once crossing the Atlantic on a cruise liner with one suite for his wife and eight children, and another on the deck below for his mistress, the actress Gloria Swanson.

Sadly, the authors have overlooked another key story, about JFK’s affair with Marlene Dietrich. Dietrich once told Kenneth Tynan that President Kennedy had seduced her in the White House. Always a speedy operator, the President finished in a matter of minutes. Then Dietrich had to leave. ‘Just as I was getting into the elevator,’ she told Tynan, ‘he said, “There’s just one thing I’d like to know.” “What is it, Jack?” I said. “Did you ever make it with my father?” “No, Jack,” I answered truthfully, “I never did.” “Well,” he replied, “that’s one place I’m in first.” Then the lift door closed and I never saw him again.’

Joe’s sons were consumed by the competitive urge – with their father, with each other, and with everyone else. A friend of mine once played a game of tennis with the ageing Teddy Kennedy; it was made clear to her beforehand that she had to lose. One of JFK’s brothers-in-law, Stephen Smith, once wittily characterised the family attitude as: ‘Ask not what the Kennedys can do for you, but what you can do for the Kennedys.’

As a family, they found it impossible to cope with losers. Finding JFK’s flighty 23-year-old sister Rosemary too much of a handful, the Kennedy parents subjected her to a lobotomy, which involved separating the frontal lobe from the rest of her brain. The operation was botched, and Rosemary was never able to speak again. She was packed off to a home. For ten years, their parents refused to tell her closest sibling Eunice where she was, or what had become of her.

The Kennedys of JFK’s generation seemed properly cursed. JFK’s older brother, Joe Jr, died when his plane exploded, near the Suffolk village of Blythburgh, during the war. His sister Kathleen, known as ‘Kick’, died in an air crash shortly after the war. JFK was, of course, assassinated, and so, five years later, was his younger brother Bobby. The youngest sibling, Teddy, seems to have been written off as a tubby loser from the start. His ruthless mother always had her doubts about him. ‘Teddy really is such a fatty,’ Rose wrote to his father. His sister Eunice chipped in: ‘He looks like two boys instead of one.’

At Harvard, Teddy was caught cheating, but the family managed to hush it up, at least for a time. When his young bride, Joan, was watching a home movie of their wedding, she noticed JFK, forgetting that he was miked, secretly telling Teddy: ‘Being married doesn’t really mean you have to be faithful to your wife.’ And so it proved.

In 1969, Teddy drove an innocent young political activist, Mary Jo Kopechne, off a bridge and into 8ft of water. Teddy swam to the surface and left her to drown.

More of a tragedy for Mary Jo Kopechne than for Teddy Kennedy, you might think, though the authors don’t seem to see it that way. On the night in question, Teddy failed to report the matter to either the police, or to his wife, though he did phone his girlfriend Helga Wagner, described by the ever-excitable authors as ‘the blonde Austrian-born wife of the American shipping heir Robert Wagner’.

After the big three – John, Bobby and Teddy – the authors whizz through the tragedies of subsequent generations at a rate of roughly one every couple of pages. Their prose is so trashy that even the most profound tragedy tends to read like an episode of Hawaii Five-0. ‘Typical Kennedy horseplay’ causes one Kennedy to crash a jeep, leaving his brother’s girlfriend permanently paralysed.

If there is a Kennedy curse, for the most part it is inflicted on those they encounter, more often than not young women. Michael Kennedy, son of Bobby and Ethel, has an affair with his 16-year-old babysitter. Ethel’s brother’s son Michael Skakel murders a young woman in 1975, and seems to get away with it, but is finally arrested in 2000. Willie Kennedy Smith, son of JFK’s youngest sister, is charged with rape in 1991. ‘The bombshell allegations of rape on the beach outside the Kennedy mansion are splashed across the world…’ begins the dreadful first sentence of this chapter.

‘James Patterson is the world’s best-selling author and most trusted storyteller,’ boast the American publishers, three times on the same dust jacket. On the evidence of this book, this doesn’t say much for the world.