What on earth made Richard Hammond get back into one of the cars that almost killed him?

Richrad Hammond clocked up another parenting milestone the other week, one he found alarming. ‘My youngest daughter passed her driving test,’ he says.

‘That was strange, watching her drive out of the gate on her own for the first time. I thought, “Oh well, that’s that then.”’

Now, you’d expect that Richard – most famous for presenting high-octane motoring shows Top Gear and The Grand Tour – would have taught Willow, 18, and her elder sister Isabella, 21, to drive himself. Alas, his services were not required.

While he was allowed in the car with both his daughters as they practised their hill starts and three-point turns, he had to agree not to speak. At all!

Richard Hammond, 52, (pictured) says he was allowed to sit in the car whilst his daughters were learning to drive but wasn’t allowed to say anything

‘I did go out with them but only for legal reasons, and mostly I had to be silent because they’d been taught by their driving instructor how to drive to pass their driving test. Anything I said would mess that up.’

He doesn’t sound remotely miffed about this. ‘Oh God, no, I couldn’t teach them how to drive to pass their tests. I doubt I’d pass myself. In fact I’m sure I wouldn’t.’

You mean you’d go too fast? Drive as if Jeremy Clarkson was watching, ready to rib you about your skills?

‘No, I’d probably be able to curb those sorts of urges, but everything’s changed about the test since I did it. You have to open the door in a particular way now, so you don’t open it into traffic. I’m certain I’d fail.’

Obviously Richard, 52, is a man who knows about feeling terror in a car. He’s as famous for his epic accidents as he is for his TV presenting.

In 2006, filming Top Gear, he spent two weeks in a coma and sustained brain injuries following a catastrophic crash. He was driving at more than 300mph in a jet-powered Vampire when a front tyre failed, causing the car to flip.

He was rushed to hospital after being cut from the vehicle, lucky to be alive.

A decade later he had another near miss, this time on The Grand Tour, when his Rimac Concept One supercar flipped, careered down a Swiss mountainside and burst into flames. Presumably, sitting beside a teenage learner inspires a different type of terror though? 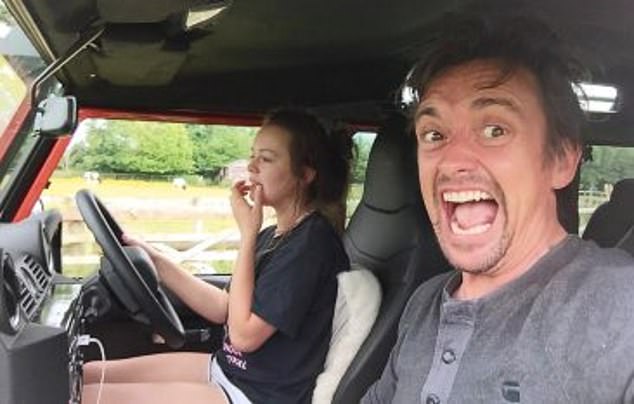 Richard pictured with his elder daughter Isabella. In 2006, filming Top Gear, he spent two weeks in a coma and sustained brain injuries following a catastrophic crash

He laughs. ‘I’d love to be able to tell you that sitting beside my teenage daughters as they learned to drive was more terrifying than going off a Swiss mountain in a blazing supercar, but it wasn’t, because my daughters are actually pretty good drivers. I think maybe they’ve learned from watching me make mistakes.’

Richard has stepped out of the car completely for his latest TV project, fronting a Channel 4 show called Crazy Contraptions, which he sees as a kind of Bake Off for geeks. The show features teams competing to make a complex chain-reaction machine that can perform a simple domestic task like feeding the dog or running a bath.

These jaw-dropping devices – also known as Rube Goldberg machines after the American cartoonist whose work featured them – have swept social media recently thanks to aficionados like Zach Umperovitch, a leading authority.

Zach is a judge on the show, advising as teams battle over four days to build vast contraptions using only household implements chosen from a selection provided.

The tasks are daft, obviously, ‘but no more daft than asking people to design a cake in the shape of something else’, says Richard. The process is addictive to watch though, and like Bake Off it doesn’t really matter if the contestants fail.

‘Things don’t always work out, but that’s part of the thrill,’ he says. ‘That’s where the nerve-racking part comes in.’

He does sound like an over-­excited schoolboy about this, the whole shebang appealing to his inner nerd. He’s exactly the sort who might be found pondering whether he could use a pulley system to pour milk onto his breakfast cereal in the kitchen without getting out of bed (exactly the sort of task set on the show).

When he isn’t fronting TV shows he runs a classic car restoration business. ‘I’m fascinated by all that,’ he says.

‘My grandfather – my mum’s dad – was a coachmaker and engineer who could build anything, and he was a great influence.’

He and his family live in a £2 million castle in Herefordshire with ample outbuildings for his tinkering which, during lockdown, became something of an obsession. ‘As I rush towards middle age, I’m finding that I love building things and making things,’ he admits.

It’s been interesting watching what the Grand Tour trio have got up to since the pandemic stopped play on their far-flung filming jaunts. They’ve all kept busy on smaller projects, although who could have predicted Jeremy Clarkson’s show about his farm would become another TV juggernaut.

Was Richard surprised? ‘Well, no, because I knew it was his passion,’ he says.

Richard’s own love of classic cars also led to a TV show. ‘For the same reasons – it was a genuine passion, something I’d have been doing anyway, but in lockdown I started to think, “What might make a TV show?”’

Later this year he’ll front another programme in which he walks the length of particular British rivers. ‘I’m very lucky because these things – whether it’s restoring a classic car, walking along a river, or watching the process of building contraptions – are things I’d be doing anyway, but I get to do them for work.’

The rivers show sounds safer than some of his previous shows (barring the risk of falling in, of course). Is he taking fewer risks at his midlife stage?

It was reported, years ago, that he was on a threestrikes warning from his wife Mindy, who let’s face it has had ample cause to worry about him.

‘It’s not a case of Mindy saying, “You must not…”. I don’t want to take risks either. I’m a father and a husband. I’d rather not exit stage left and be deprived of that.’

It’s always tricky talking about the lasting effects of his brain injury, mostly because these things are impossible to quantify. He certainly suffered some memory loss in the years immediately after his first big accident, but says it may not be anything to do with brain damage.

‘It’s a lot of years since then, but obviously it was a brain injury, a frontal lobe one in my case, and I’ve spent a lot of time examining myself. But I’ve had other changes in my life, ones that affect us all in middle age.

‘My memory is not as good as it was, but it could be because I’m 52.’ He sounds almost gleeful about being 52.

‘I have to say I’ve settled into my fifties. I’m rather enjoying being a grown-up!’

It’s revealing that in January, Richard did something he never expected to – he got back in the (rebuilt) Vampire supercar for the first time. A team of motoring enthusiasts had painstakingly restored the burned-out car, charting their progress on YouTube.

He had a (ghoulish?) interest, particularly when he discovered that this restoration was happening ‘in my neck of the woods’. So he went for a peek and – surprising himself – agreed to sit behind the wheel again.

I’d retraced those moments many times, as far as I was concerned they were my last minutes

He admits it was a big deal. ‘It was a very strange, quite haunting experience actually, because although I remembered getting in it before, I didn’t remember getting out of it, so technically I was still in it.’

Did he find himself transported back to, presumably, the worst moment of his life? ‘God, yes, of course, because I’d retraced those last moments many times.

‘As far as I was concerned they were my last minutes. Yet I was fascinated to see this machine that had tried to kill me.

‘Crucially it had failed, and I wanted to go and face it. It was a bit of a demon, and in life it doesn’t help to have demons still knocking about.

‘If you can put them away, you probably should. I haven’t actually been in it when it’s been moving yet, but I might revisit that.’

The important thing is that he was able to lay some ghosts to rest by the simple act of just getting out of that car by himself.

‘It was a strange sensation, knowing that last time I’d been taken in a helicopter to hospital with brain damage. This time, I just got out and had a cup of tea!’