‘What’s up, skip?’ The moment a paraglider lands… only to be attacked by a rampaging kangaroo

‘What’s up, skip?’ The wild moment a paraglider lands… only to be attacked by a rampaging kangaroo

A paraglider escaped an unprovoked attack by a kangaroo moments after landing.

A new video shows an Australian man’s landing interrupted when he is ambushed by a kangaroo.

The video, which already has over 14,000 views, shows the man gliding peacefully towards an open area at an old space tracking station near Canberra after he had been paragliding for two hours.

Panicking, man scrambles away from the kangaroo and he can only defend himself by holding his arms up (file picture)

When he landed, the kangaroo charged him.

‘As it ran towards me I thought it was being friendly so I said “What’s Up, Skip?”

”It then attacked me twice before hopping away,’ he said.

‘I packed up my paraglider and I had to walk several kilometres to get phone reception and call a friend to come and collect me.’ 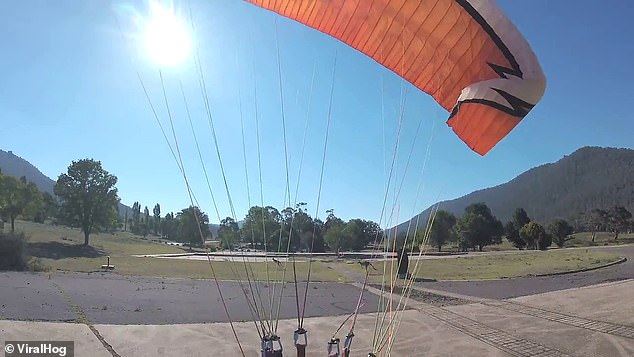