Never miss a group call again! WhatsApp launches ‘Joinable Calls’ feature that lets you connect to a call even AFTER it’s started

The feature, which rolls out from today and is available for both voice and video calls, is the perfect fix for users with punctuality issues.

With Joinable Calls, if someone in your group misses a call when the phone rings, they can still join at any point during the chat.

It also lets all any participants in a group call drop out and re-join the call later as long as it’s still happening.

WhatsApp users will be able to see calls in progress under the ‘Calls’ tab.

They’ll be given the option to ‘tap to join’ as long as the call is in progress.

Participants can also drop out of the call and re-join later.

Joinable Calls is for up to eight people.

Generally on WhatsApp, chats and calls are either between one other person or several other people (in groups).

Users have to be part of a group to experience Joinable Calls.

WhatsApp said in a blog post that the feature is for friends or family members who realise they’re missing ‘a special moment’ on the platform.

‘Today we’re introducing the ability to join a group call, even after it’s started,’ the Facebook-owned firm says.

‘Joinable Calls reduce the burden of answering a group call as it starts, and brings the spontaneity and ease of in-person conversations to group calling on WhatsApp.

‘At a time when so many of us are apart, there’s nothing better than getting together on a group call with friends and family, and there’s nothing worse than realising that you missed a special moment.’

On WhatsApp, calls are listed under the ‘Calls’ tab on the app’s homepage.

With Joinable Calls, users will know when group voice or video calls are in progress without them by tapping on the Calls tab.

When calls are in progress, they’ll be given the option to ‘tap to join’.

Whether they’re voice or video calls will be denoted by a small telephone or camcorder icon, respectively.

Up until now, group chat participants who missed a group call wouldn’t know that the call is ongoing – they just have a missed call notification.

The feature also includes a ‘call info screen’ so users can see who is already on the call, and who has been invited but hasn’t yet joined.

The call info screen is the last step before joining the call.

And if you tap ‘ignore’ you can join later from the calls tab in WhatsApp.

As it’s for group calls only, Joinable Calls only works for the smartphone app and not the desktop app (which is currently one to one calls only). 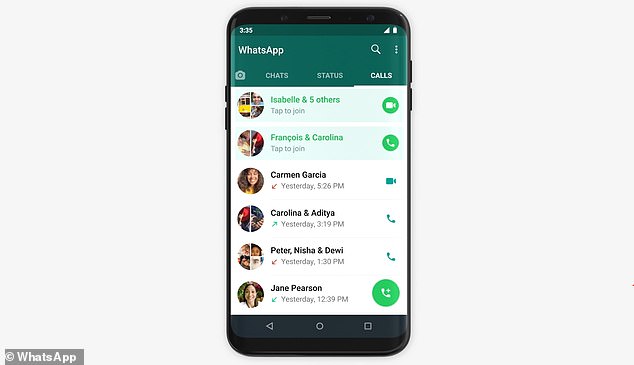 Calls in progress are listed under the calls tab (pictured). Users will be given the option to ‘tap to join’ whether or not they’re voice or video calls

Like with any type of text, voice or video-based communications on the platform, Joinable Calls will be end-to-end encrypted.

This means that only the participants of a chat can access the content of the messages, and no one in between – not even staff of the company that owns the service.

Joinable Calls comes just a week after WhatsApp announced it’s letting users send messages from its PC app without needing to have their smartphone connected. 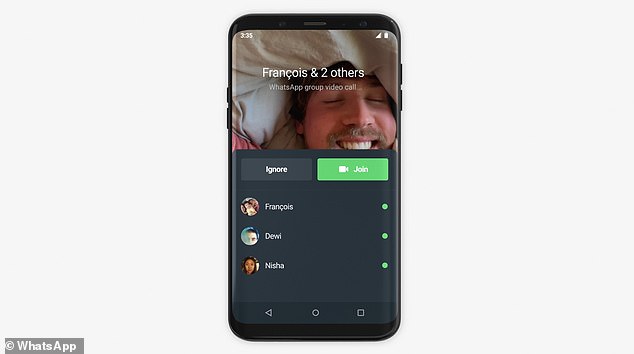 The feature also includes a call info screen so users can see who is already on the call, and who has been invited but hasn’t yet joined (pictured)

WhatsApp is testing the feature with ‘a small group of users’ as part of a beta test before ‘slowly rolling it out more broadly’, the firm said.

Prior to this, users needed their smartphone to be on and connected to the internet for the PC version of WhatsApp to work.

In June, the platform launched Fast Playback, allowing users to increase the playback speed of audio messages to up to double speed.

And in March, WhatsApp rolled out one-to-one voice and video calls for the desktop version of its chat platform on Windows PCs and Apple Macs.

WhatsApp began rolling out voice calls for its mobile app in 2015 and video calls the following year. March’s update brought both of these features to WhatsApp for desktop.