When is my Spotify Wrapped 2022 out? How can I see my top songs and artists?

December is almost here, which means Spotify is about to remind you just how embarrassing your listening habits are.

The steaming giant’s annual Wrapped feature will reveal the songs you’ve played the most over the year – regardless of whether they’re cool or cringey.

Wrapped also showcases your most played albums, artists and podcasts of the year, as well as the top tunes of Spotify’s 456 million users worldwide.

Here’s all there is to know about Spotify Wrapped 2022, including how it’s calculated and when you can access it.

The playlists showcase your most played songs, albums, artists and podcasts of the year, as well as the top tunes of Spotify’s 381 million users worldwide

WHAT IS SPOTIFY WRAPPED?

Spotify Wrapped is described by Spotify as ‘a deep dive into the music and podcasts that defined your year’.

It gives users visual charts of the music and podcasts that they’ve listened to the most annually.

Spotify Wrapped began in December 2016, and has been promoted by Spotify every year since.

Wrapped is simply a marketing campaign intended to promote Spotify, but it’s gained popularity among users who love to show off their fashionable tastes in music.

Its release in early December each year has correlated with a boost to Spotify’s app store ranking, so the Swedish streaming giant makes a big effort to add to the hype beforehand.

WHEN IS SPOTIFY WRAPPED RELEASED?

Spotify Wrapped usually drops in the first couple of days of December, which would mean Thursday or Friday this week.

On its website, Spotify says ‘Wrapped is coming’ and that it will reveal more when it’s accessible to users. 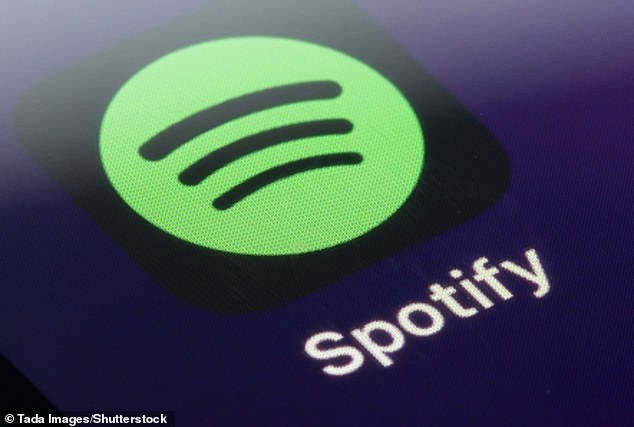 Music streaming giant Spotify is about to remind you just how cringe your listening habits are, with the launch of its annual Wrapped playlists 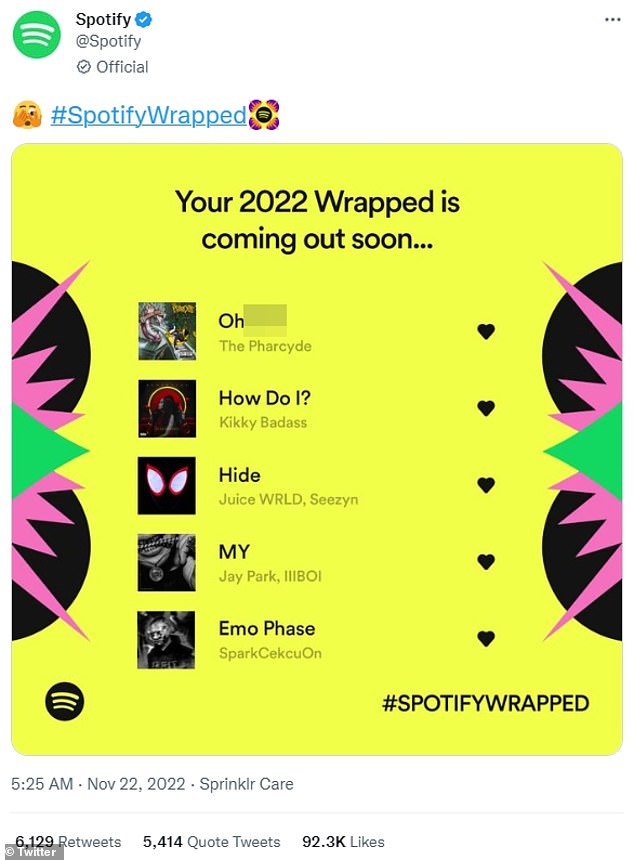 Spotify Wrapped is described by Spotify as ‘a deep dive into the music and podcasts that defined your year’. It gives users visual charts of the songs, artists and podcasts they listened to the most in a given year

Music fans are eagerly awaiting the imminent release of Spotify Wrapped, which reveals our most played artists of the year each December.

But to keep us going in the meantime, another tool has been released which is simultaneously getting us excited for the next festival season.

The tool, called ‘Instafest’, generates your ultimate festival line-up by selecting your top artists from your Spotify listening history.

Created by A University of Southern California student, it presents your results in a Coachella-style poster with three hypothetical days of music.

‘Wrapped is a deep dive into the music and podcasts that defined your 2022,’ it says on the Wrapped webpage.

‘Keep listening to what you love, and we’ll shout when it’s ready.’

The official Spotify Twitter account has already been teasing Wrapped’s release, although the official date is a tightly-guarded secret.

On Sunday, Spotify posted: ‘Want to be the first to know when #SpotifyWrapped is here? Heart this tweet and we’ll remind you!’

Once released, Spotify’s Wrapped playlists will be available to access here, and include ‘Your Top Songs 2022’ and ‘Your Artists Revealed’.

To see your top songs, albums, artists and podcasts of 2022, simply open the Spotify app, and you should see the Wrapped experience at the top.

Aside from the personalised Wrapped experience, Spotify will also unveil the top songs, albums, artists and podcasts around the world in 2022. 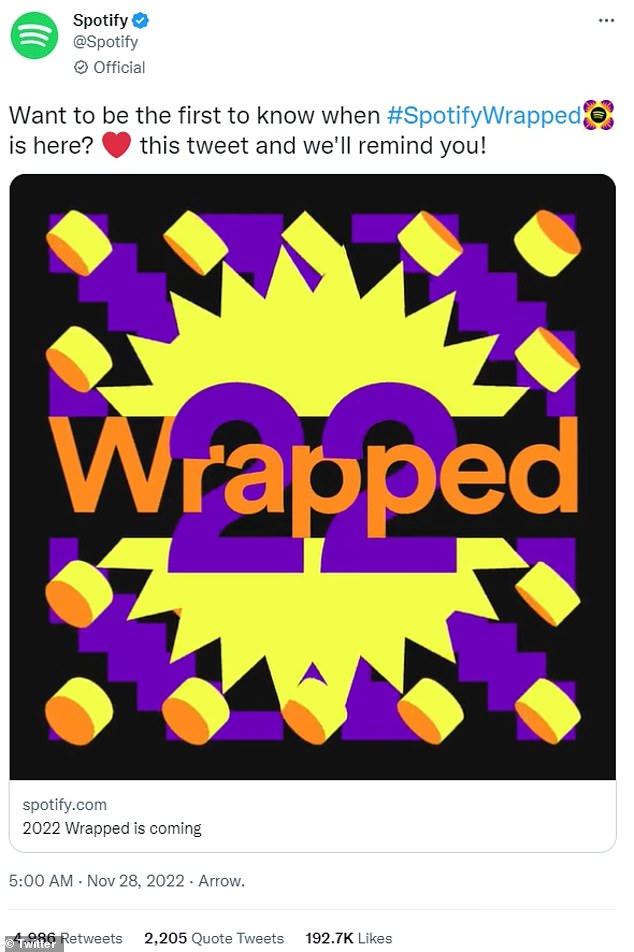 On Sunday, Spotify posted: ‘Want to be the first to know when #SpotifyWrapped is here? Heart this tweet and we’ll remind you!’

HOW IS SPOTIFY WRAPPED CALCULATED?

Spotify Wrapped tracks users’ listening habits from the beginning of January to the end of October – meaning November is omitted.

Therefore, Wrapped doesn’t actually represent a whole year’s worth of stats, despite being touted as the ‘story of your year’.

It also means that you can listen to embarrassing artists to your heart’s content in November, safe in the knowledge that it won’t affect your Wrapped results.

For a song to count in your song rankings, you have to have listened to it for more than 30 seconds.

What’s more, top songs are calculated by how many times they were played rather than total time listened.

WHICH SPOTIFY USERS GET WRAPPED?

Wrapped is available for both Free and Premium users, although Premium users get additional personalised data.

Generally, the free version of Spotify includes multiple limitations, in an effort to get users to upgrade to Premium, which starts at £9.99 per month unless you’re a student.

Most notably, unlike Premium, the free version has adverts and doesn’t let you download music to listen to offline.

Also, the free version doesn’t let you select specific songs or play albums from start to finish – infuriating for genuine music lovers – and you can only skip six tracks per hour (with Premium, there’s no limit on how many tracks you can skip).

Since its foundation 16 years ago, Spotify has led a revolution in how we listen to music, away from downloading and listening to it offline.

It now has 456 million monthly active users, including 195 million subscribers who pay for it through Premium.

Spotify: The Swedish streaming service that took the music world by storm in just 14 years

Founded as a small start-up firm just 14 years ago, Spotify has quickly risen to take the music world by storm.

From its humble beginnings, the music streaming service, which boasts a library of 80 million songs, now has a staggering 456 million monthly active users.

The meteoric rise began in Stockholm, Sweden, in 2006. The company was co-founded by Daniel Ek, the former boss of popular fashion-based browser game Stardoll, and Martin Lorentzon, co-founder of digital marketing firm Tradedoubler.

The small start-up was set up as a response to the growing piracy problem the music industry was facing. It launched two years later with a free registration service for users to stream music via the internet.

This model allowed users a freemium service – allowing users to listen for free with adverts – or a paid subscription service.

It set Spotify aside from the rival Apple’s iTunes store, from which users bought digital copies of songs or albums to build their own library which they could listen to whenever they liked.

By 2009, the company had reached the UK. Its popularity surged after the release of its mobile service. 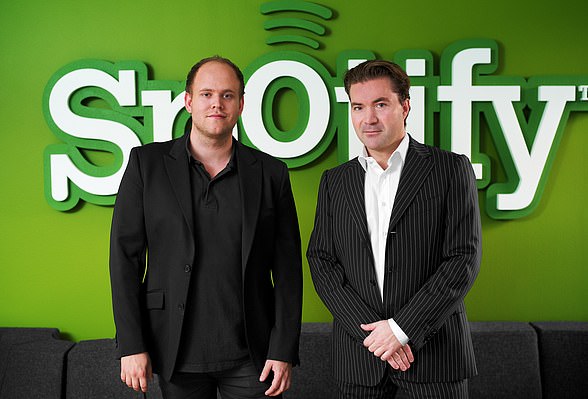 The meteoric rise began in Stockholm, Sweden in 2006, when the company was co-founded by Daniel Ek, the former boss of popular fashion-based browser game Stardoll, and Martin Lorentzon, co-founder of digital marketing firm Tradedoubler

By March 2011, five years after it was founded and three years after its launch, Spotify had 1 million paying subscribers across Europe. Within six months, that number had doubled.

In the same year, Spotify launched in the US, again to great success. By 2012, the streaming service had 15 million active users, 4 million being paying Spotify subscribers.

And subscription figures continued to grow and grow and grow, more than doubling by 2014. By 2016 it had 40 million paying subscribers and 100 million total users.

As of September 2022, Spotify has 456 million users worldwide.

But despite its meteoric growth, the company has historically struggled to produce profits.

It has also faced criticism from those in the music industry, including Taylor Swift, who have argued that the service does not compensate musicians fairly.

The company distributes approximately 70 per cent of its total revenue to rights holders, mostly record labels, who then pay artists based on individual agreements.

In a bid to drive its profits, the owner of Spotify, Spotify AB, was floated on the New York Stock Exchange as a publicly traded company in 2018.

The move came after the company made losses of nearly £870 million over the previous three years.

Despite being floated publicly, Spotify did not issue new stock when being floated in 2018, instead selling shares that were held by its private investors. The aim of the scheme was to raise investment for its expansion plans.