When it rains, it POURS! Curfew-hit Britons wake to a drenching

When it rains, it POURS! Curfew-hit Britons wake to a drenching as showers sweep away summer with 10C drop in temperature… with dismal weather to last all week

Britons woke up to a drenching this morning as showers brought an end to summer – with poor weather set to last much of the week and temperatures plunging 10C.

The mercury hit 26C in East Anglia during sunny conditions yesterday, but by later this week maximum temperature will drop to a miserly 16C as gales and thunder lash much of the country.

Today will see rain across much of southern England, with brighter spots in Scotland and Northern Ireland.

Squally showers will linger over much of Britain by the end of the week, before the skies clear for a brighter – though still chilly – weekend.

Today will see rain across much of southern England, with brighter spots in Scotland and Northern Ireland 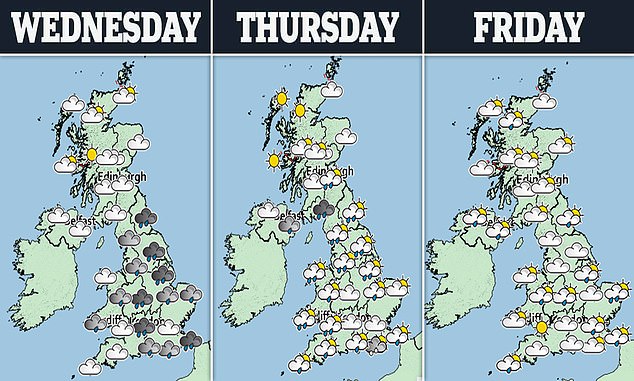 ‘We’re seeing showery rain across the south-east at the moment, which will clear but by lunchtime another band of rain will sweep in.

‘They’ll be plenty of bright weather in Scotland and Northern Ireland and it will be low to mid-teens in the north and west.

‘Conditions will turn quite cold overnight, with air temperatures dropping down to freezing in parts of Scotland.’

Things are unlikely to improve until Saturday, the forecaster explained.

‘Tomorrow is looking like a very unsettled day with squally showers and thunder in places,’ he said.

‘The highest temperatures will be around 13C to 15C, which is about 10 degrees down from what there’s been recently.

‘Then on Friday the showery weather will push towards the east but temperatures will continue struggling in the mid-teens.

‘The weekend looks much more promising with bright weather around but it will stay chilly.’ 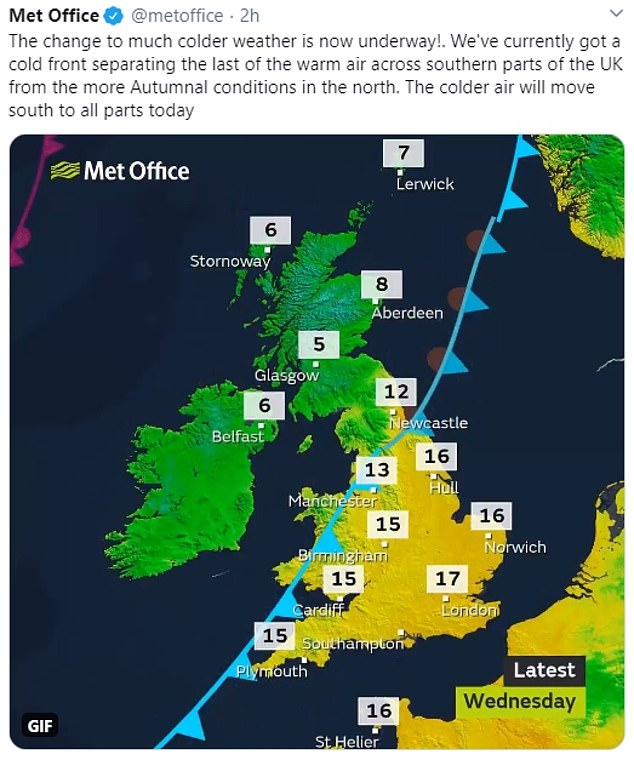