The statistics are mind-boggling. More than 3.5 million people are expected to pass through the gates of Winter Wonderland, Britain’s biggest Christmas fair, between now and January.

That’s like an entire FA Cup final crowd turning up to the London attraction every single day.

In just 45 days, its visitor numbers will eclipse the annual attendance at every other theme park in the land. The main reason is that entry is entirely free. It’s a case of pay-as-you-go for more than 50 rides, while many people simply turn up to enjoy the 200 bars and food stands.

All lit up: London’s Winter Wonderland glows at night. Local councils estimate that it will generate a whopping £100 million for the London economy

Local councils estimate that Winter Wonderland, a short walk from the West End, will generate a whopping £100 million for the London economy.

But it’s not until you walk in that you begin to appreciate the scale of this thing. Having spent a day with our three children (aged 12, ten and eight) my advice is to get there early. While it looks more dramatic lit up at night, it’s less crowded by day.

Last Sunday, we only had to wait ten minutes for the Wilde Maus XXL rollercoaster at 3pm. When my daughter insisted on another go three hours later, the queue took nearly an hour. But given that it costs £5 for a child under 12 and £7 for an adult each time, those long waits can have their upsides.

Similarly, at lunchtime there was no queue at all for the big wheel, which I can warmly recommend.

New this year, it is the biggest transportable Ferris wheel in the world, rising more than 200ft above Hyde Park to offer a fine view of the skyline and its larger permanent cousin, the London Eye.

Prices start from £8 per adult and £6 per child (off-peak) to £10 and £8 at peak times. Each ride lasts about ten minutes and you get three rotations. Those in a hurry can pay for a fast track pass to the front, costing £5 for adults and £3 for children.

Rides are paid for by tokens you buy at booths scattered around the site. It’s £1 per token, so just buy what you need.

The most expensive ride is also the queasiest — the £9-a-head Munich Looping, a replica of the Olympic rings, which goes upside down five times. It is the world’s largest travelling rollercoaster, and has been transported directly from the Munich Oktoberfest. 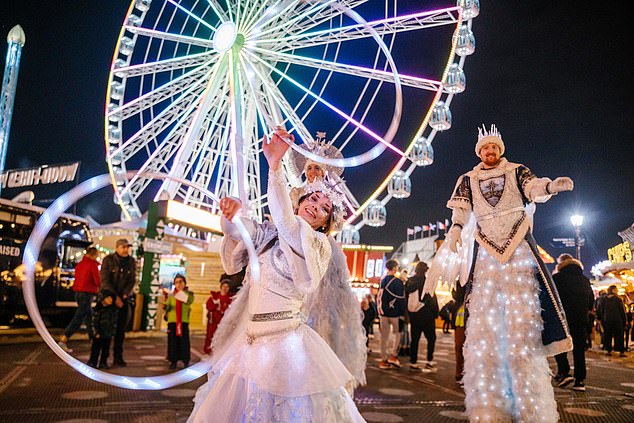 More than 3.5 million people are expected to pass through the gates of Winter Wonderland, Britain’s biggest Christmas fair, between now and January

It turns out a lot of these rides and bars come straight over from Germany once Oktoberfest is over. Hence the strong Bavarian flavours and bratwurst stalls.

The standard of the scoff is certainly high, and prices vary. You will pay £12 for a plate of Indonesian curry at the snazzy street food market in the middle of the site, or you can head to the periphery and have an excellent wood-fired pizza for £7. Similarly, it’s £6 for a pint of lager but £2 for a cup of tea.

Among the best-value rides is the £5 Fun House, a multi-storey assault course which will occupy a child for at least 15 minutes. A thumbs-down, however, goes to the Star Flyer. It is a £7-a-head (all ages) high-rise swing which is over almost as soon as it has started.

The best of the lot is Zippos Circus — magnificent acrobats, unicyclists, trapeze artists and a juggler who repeated his world-record-breaking trick (keeping five boomerangs aloft at the same time) in front of us.

Prices start at £7.50 for an off-peak child’s ticket to the spellbinding 45-minute show.

The park hit the headlines this week when a poor trapeze artist fell at a different show called Cirque Berserk but, fortunately, she is now on the mend.

And you must go for a stroll through the tranquil Magical Ice Kingdom. It’s an indoor ice sculpture park with a temperature of minus 10C. When you emerge, you’ll find a London winter evening feels almost tropical.

Winter Wonderland is open in Hyde Park from 10am to 10pm every day, bar Christmas Day, until January 5 (hydeparkwinterwonderland.com).