Which era of beauty would best flatter your looks?

From electric blue eyeshadow and hot pink blush to bushy brows and frosted lips . . . is it any wonder some trends from the past 100 years failed to stand the test of time?

Make-up and hairstyles have changed drastically down the generations, with our mothers, grandmothers and great-grandmothers sporting looks that now seem unflattering or bizarre.

But retro beauty is making a comeback. Max Factor, Charlotte Tilbury and Bobbi Brown are selling products popular in the Forties and Fifties, from pan stick foundation to block mascara — and they’re flying off the shelves.

Meanwhile, vintage beauty tutorials are racking up millions of views online, with how-to videos showing us simple ways of recreating the hair and make-up of style icons from history, including Marilyn Monroe, Farrah Fawcett and Brigitte Bardot.

‘These classic looks still make women beautiful, rather than just being passing fads,’ says Louise Young, a leading make-up artist and author of new book Timeless: A Century Of Iconic Looks, which details classic beauty techniques from the 1890s to the present day and how you can recreate them.

‘The old Hollywood looks are quite simple and can be adapted to any face shape or complexion,’ she adds. ‘Thanks to social media such as YouTube and Instagram, where experts can share their tips and techniques, women are feeling more adventurous.’

So, what can we learn from the beauty trends of the past? Could techniques dating from 30, 40 or even 100 years ago be the secret to fuller lips, contoured cheeks and long, fluttering eyelashes?

With the help of celebrity make-up artist Oonagh Connor and vintage hair stylist Natasha Hall, I took a walk down memory lane —with surprising (and, at times, strangely familiar) results . . . 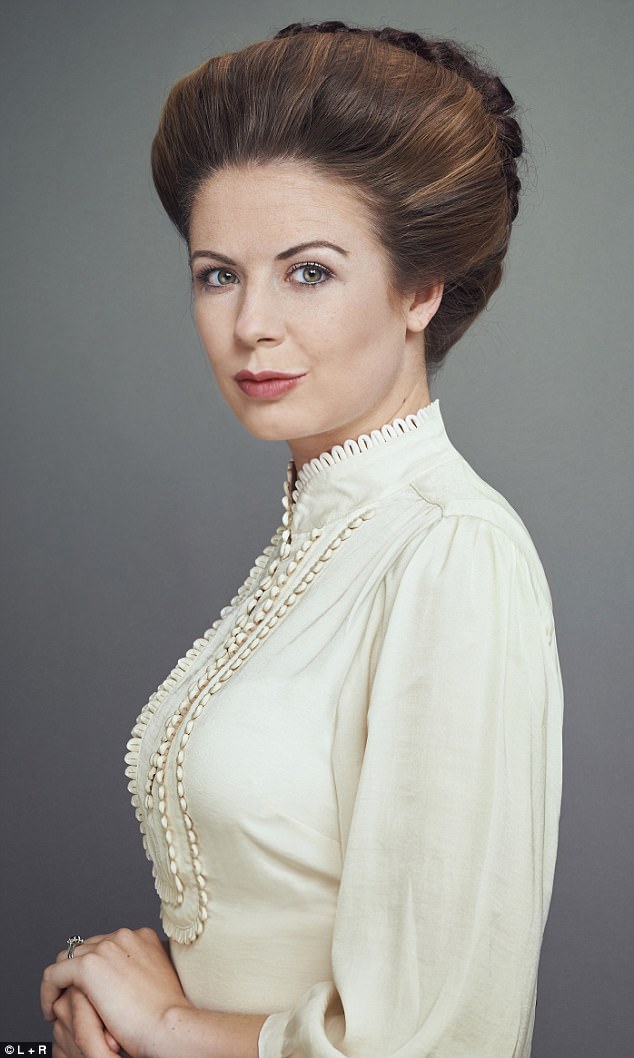 With their high collars, severe expressions and hair piled up in a sort of upside-down mushroom, Victorian beauty ideals were distinctive, to say the least.

Women wore minimal make-up: light grey shading on the eyes and brows, the palest foundation (a porcelain complexion was said to show the difference between a lady and a woman of lower class, who was more likely to spend her days outdoors) and just a hint of a red stain on the lips.

The hairdo of the era was the ‘pompadour’ — named after Madame de Pompadour, mistress of King Louis XV — where the hair was turned up from the forehead and around the face in a roll.

As a Downton Abbey devotee, I can’t wait to try this look. Oonagh uses pale ivory foundation and lots of white powder to get my skin tone right, followed by soft rose blusher, grey shadow around my eyes and plum lipstick, which she blots to make it look faded.

Natasha curls my hair in wide rollers, before using plenty of hairspray to fix it on top of my head. To that, she adds a curled hairpiece, which gives my ’do volume and height.

The hair is heavy, but I love the subtle, less-is-more make-up. I feel elegant, but haughty, like the Dowager Countess of Grantham. 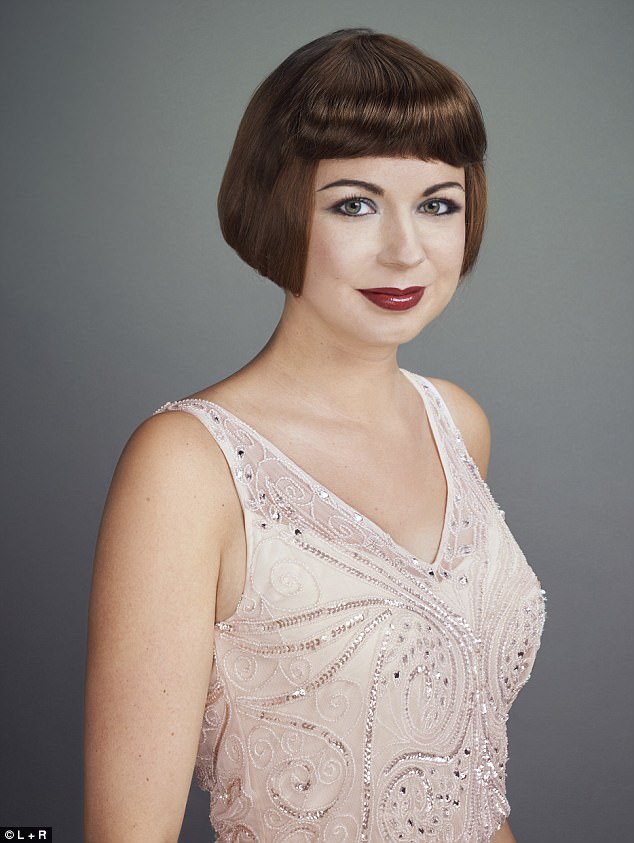 The Roaring Twenties, a decade epitomised by bobbed hair and cupid’s bow lips, were a stark contrast to the austere looks of the past.

Max Factor brought make-up to the masses, and Maybelline mascara — named after the inventor’s sister, Mabel, who used to coat her lashes with Vaseline — was invented in 1915.

Women wore white and pink-tinged face powder, usually applied with a puff made from swansdown, while blusher came in a paste or powder. One of the most striking elements favoured by Flappers was the eyebrows, which were shaved off and drawn back on.

To recreate this look, Oonagh applies a pale foundation and rings my eyes with creamy grey eyeshadow. She puts dark rose blusher on the apples of my cheeks and applies plum-coloured lipstick. Then she uses concealer to camouflage the undersides of my eyebrows.

This sharp-fringed bob was popularised by vampish starlet Clara Bow. As I’m unwilling to risk such a severe chop, Natasha ties my hair in a ponytail and tucks it in at the nape of my neck to make a bob, before adding a fake fringe (hairpieces, made from nylon stockings stuffed with hair, were common at the time, too). With my full cheeks and pale skin, I’m not sure this look is for me, especially the ultra-thin brows. I look less silent film star and more like I’m permanently surprised. 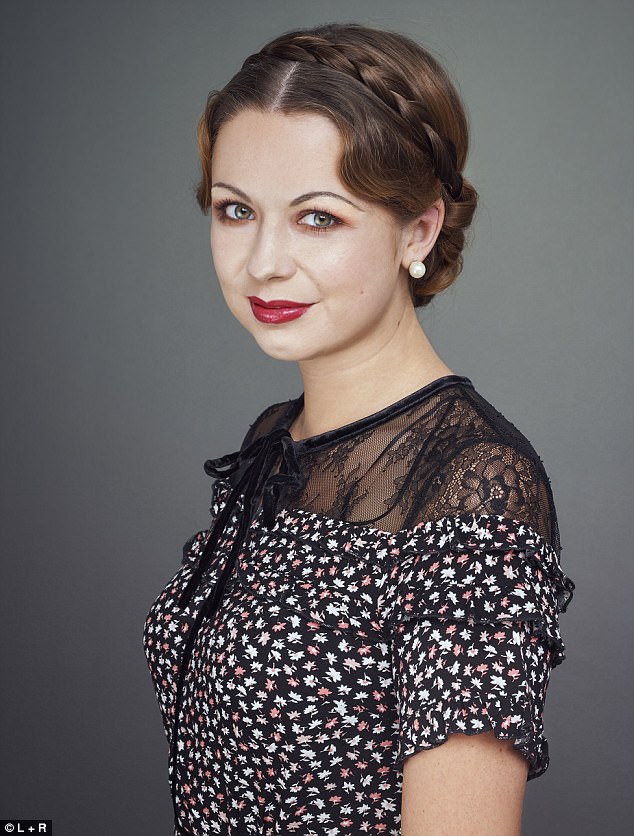 Glossy Hollywood films set the tone for beauty in the Thirties, with women coveting all the vivacious, glamorous looks of screen stars such as Marlene Dietrich and Greta Garbo.

Eyebrows were arched, tanned skin became more fashionable (in contrast to the pallor of the Twenties) and lipsticks started to be sold in brighter colours, including coral and purple.

Younger women wore cake mascara, a solid block of make-up that was activated by water — or more often, in the absence of a tap, spit.

Magazines explained how to achieve celebrities’ looks, including finger waving their hair, a delicate technique that involved pinching the hair between the fingers and combing it in alternating directions.

Oonagh uses bronzer to make my skin golden and copper-coloured eyeshadow to give my eyes a doleful appearance. She applies a touch of orange-red blusher and a fashionable red colour to my lips, not dissimilar to the shade I’d wear today.

The hair, though, is far outside my comfort zone. Natasha plaits my ponytail and fixes the braid around the top of my head like a hairband, before using heavy-duty grips and straighteners to create tight curls around my face, which she sets in place with spray. When I look in the mirror, I can barely believe my eyes: I look exactly like my grandma. I’ve never seen the resemblance before but, dressed like this, we could be sisters. 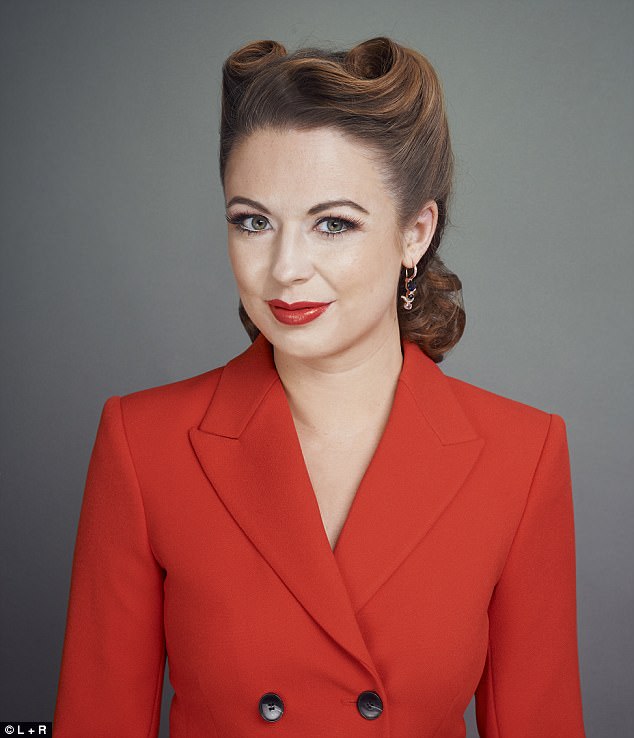 By now, women were embracing make-up, offering a glam, groomed image on the Home Front to boost troops’ morale during World War II. A flawless complexion was desirable, with full, red lips.

Max Factor launched its Pan Stik foundation in 1948, as well as Pan-Cake, a powdered compact originally made for use on-screen, which became a bestseller.

At a time when 80 per cent of women worked in factories, hair styles were practical, with ‘victory rolls’ — voluminous curls that framed the face, named after the manoeuvre performed by military aircraft — commonplace.

Oonagh gives my skin a sheen with creamy foundation, then uses white kohl pencil in my inner eye corners and on the lower rims to brighten my eyes. She applies false lashes — which were sold in London from 1903, made from human hair woven through gauze — to widen them further.

My hair is curled at the back and put into a loose net to keep the ringlets in place, while the top is split into three sections and clipped on top of my head in neat, stylish rolls. This is my favourite look of the lot: I feel confident, feminine and sophisticated. 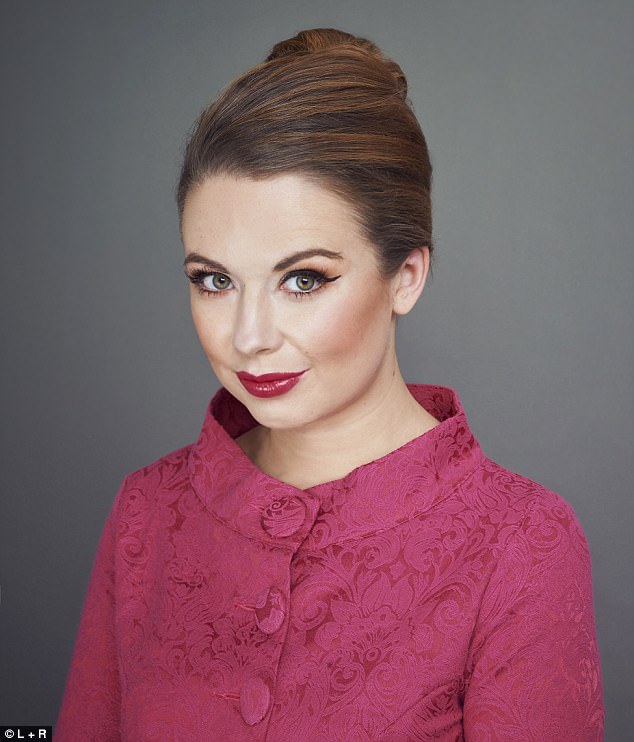 Beauty in the Fifties was simple, pared-back and elegant. The doe-eyed look, made famous by the model Jean Patchett, photographed for the cover of Vogue in 1950, marked the start of an emphasis on eyes.

Brown and lilac eyeshadows were popular and eyeliner was flicked at the corners. False eyelashes became a make-up bag essential, as did Max Factor’s Creme Puff, an all-in-one cream and powder which gave women the appearance of flawless skin.

Stuck with my brunette locks, Natasha scrapes my hair back into a chignon — making me look like a prim and proper Stepford Wife.

My make-up is girlie and coquettish: pink lips, lots of blusher and a flick of black liner at the outer edges of my eyes, which elongates my lashes beautifully.

These were the early days of contouring — the modern-day technique whereby different shades of foundation emphasise flattering features of the face — and it does wonders for my non-existent cheekbones. 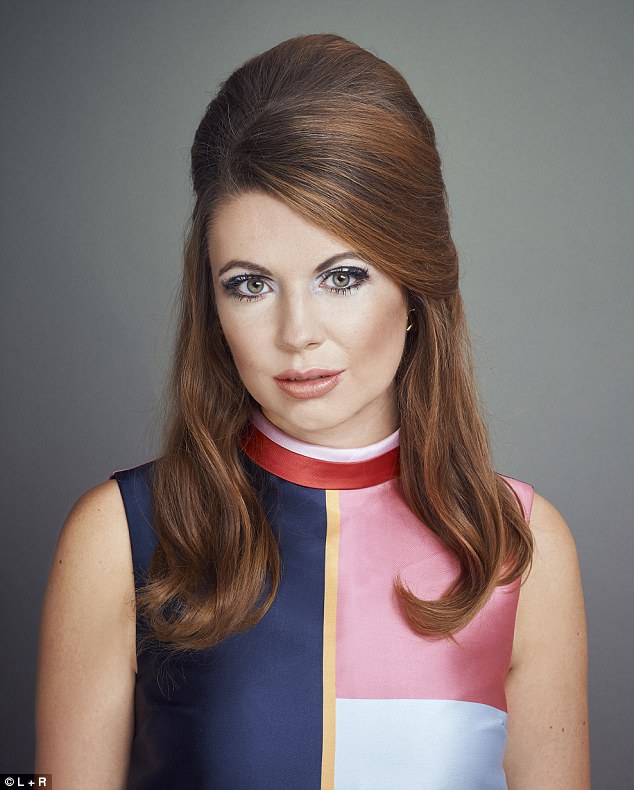 Sarah says the 1960s look made her face feel like it was caked in make-up. The style was inspired by Twiggy’s expressive style which set the trend of the decade

Women really used make-up to express themselves in the Swinging Sixties, looking to icons such as Mary Quant, Jean Shrimpton and Twiggy to set the trends of the decade.

Everything was bigger and bolder: eyeliner was heavier and flicks more pronounced, mascara was thicker, lips were glossier and hair was backcombed into bouffant beehives.

Pond’s Cold Cream, recently praised by the singer Kylie Minogue, was on every bedside table up and down the country, while colours were more daring than in previous decades: lipsticks came in gold and silver, and eyeshadow in plum and bottle-green.

Oonagh recreates Twiggy’s distinctive eye make-up by shading my lids and around my eyes in white, before drawing a dark grey line along my eye crease (this supposedly makes the eyes ‘pop’, though mine look like they’re popping out!) and applying thick mascara to my bottom lashes to mimic Twiggy’s deer-in-headlights look. Natasha backcombs my hair before pinning half of it up — with liberal hairspray — into the classic beehive shape and loosely curling the ends with hot tongs.

Though the effect is impressive, it’s a lot of effort to create. I feel like my face is caked in make-up and my hair is stiff and sticky. 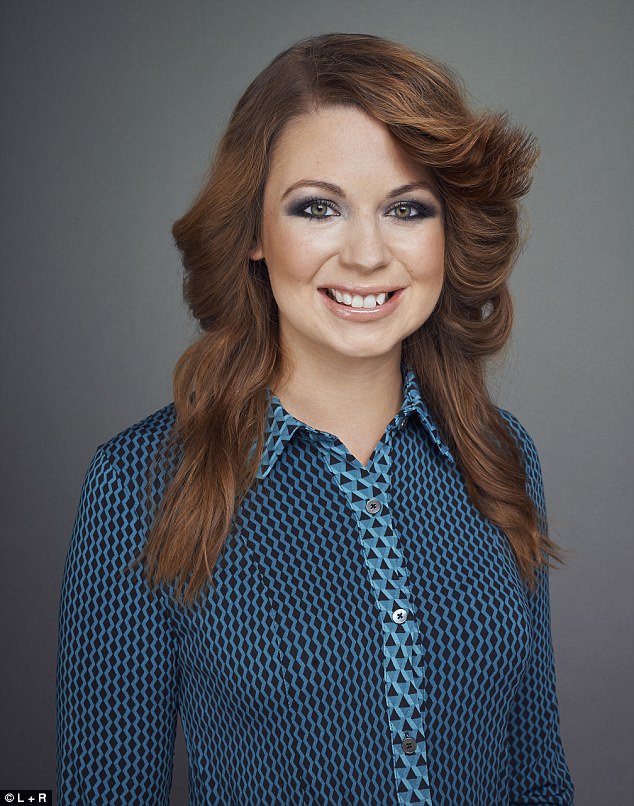 In a decade of flares, tank tops and disco, the Seventies were all about discovery in the cosmetics world. Women wanted make-up to reflect their free-spirited nature — which meant clear, roll-on lip gloss, pastel eyeshadow and bronzed cheeks.

Biba, the ubiquitous London brand, made fun products in vibrant hues for the young, while older women wore Elizabeth Arden and Estee Lauder.

Oonagh uses matte black shadow to make my eyes look sultry and rings them in black kohl. Next, she dusts bronzer all over my face to give a sunkissed glow, darkens my brows using a pencil and applies translucent gloss to my lips.

For hair, there’s no more iconic look than the Farrah Flick. Natasha uses curling tongs to tease my hair into soft, tumbling waves, then uses straighteners to give each strand an exaggerated upwards flick at the end.

It’s dated — I look like one of Charlie’s Angels — but I feel fabulous. The make-up is natural and the hair is everything I long for: big, bouncy and head-turning. 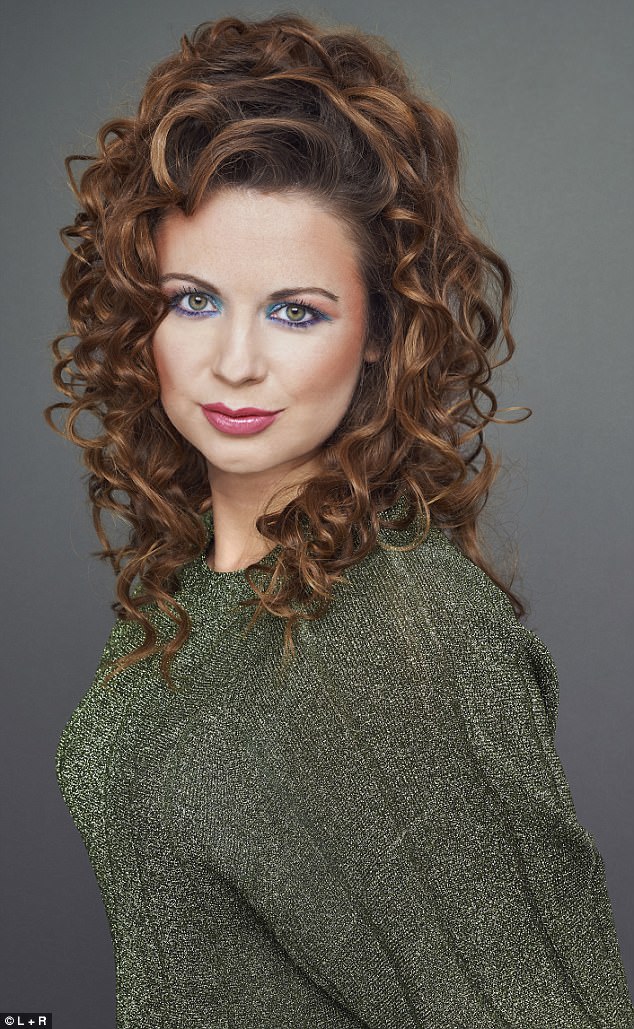 Popular lipstick colours included fuchsia, orange and frosted pink, and there was a fad for wearing clashing eyeshadows: pink and blue, gold and green, or orange and teal. Highly pigmented blushers were used right up to the hairline, as well as being dusted on the forehead and chin.

Oonagh goes to town on my eyes, using blue, green and pink eye crayons to cover my lids in bright colour. She uses a brown pencil to make my eyebrows look bushier, then applies fluorescent pink blush to my cheeks and temples.

Big hair, often permed, was in — a look not everyone could pull off. With this make-up, however, I feel ready for anything.

Natasha curls tiny sections of my hair into tight ringlets, backcombing sections closest to my scalp, before running her fingers through it and spritzing it with spray.

I look uncannily like my mum in this era — with the fierce, self-assured stare of a teenager on her way to a school disco.

I’m not sure it’s one for every day, but it’s certainly glam.

Timeless: A Century Of Iconic Looks by Louise Young with Loulia Sheppard (Mitchell Beazley, £20) is out now.