How do you like your eggs in the morning? Boiled, fried and scrambled are simple, but ask your significant other to poach you an egg and you may end up going hungry.

The perfect poached egg is tricky. From thin, watery whites to split yolks, eggs that disintegrate in the pan or are ripped apart by bubbles, there are so many ways it can go wrong.

Two-thirds of Britons say they can’t poach eggs properly, and this week domestic goddess Nigella Lawson admitted even she was intimidated by the fiddly job until recently, when she devised a new approach — using a tea strainer.

Cooking the perfect poached egg can be a tricky art, with two-thirds of Britons saying they struggle to do so properly

She revealed that the flawless poached eggs served in restaurants aren’t so easily achieved, either: chefs use scissors to remove the scraggly ends before putting them on your plate.

So how do you perfectly poach an egg? The one incontrovertible piece of advice is this: freshly laid eggs (medium-sized are best) poach better than supermarket eggs. The latter may be up to 60 days old, so their inner membranes are weak and they will spread out in the pan.

And the best cooking method? We asked chef Theo Randall, whose restaurant at the InterContinental Hotel on London’s Park Lane has won awards for its brunch menu, to pit his own method against the very different techniques of seven of his fellow chefs’… 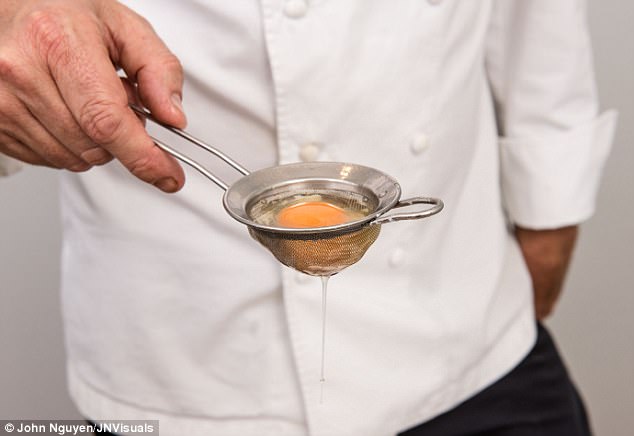 Nigella holds her tea-strainer over a cup and cracks the egg into it ‘so all the very watery bits go underneath’. It’s nifty but seems like a waste of egg.

Then she decants the egg into another cup and adds a teaspoon of lemon juice. She boils a pan of water and turns it down — ‘almost turned off’ — before sliding in the egg and leaving it for 3-4 minutes. She uses a slotted spoon ‘to encourage the white to come up in shape’, moulding the wispy tendrils into a neat orb. Then she uses the spoon to take it out.

THEO SAYS: ‘This seems fiddly but it’s not as silly as it looks. She is using the strainer to remove the watery outer white, which is tasteless. Using the spoon to mould the egg is clever — you could do lots of eggs in one pan this way.’

SARAH’S VERDICT: Nigella’s eggs look perfect — neat orbs of bulbous yolk surrounded by swirled white. They taste quite citrussy but are runny and delicious. Shame about the wasted white.

Delia Smith, who wrote a whole chapter on eggs in her 1998 book How To Cook, stresses the importance of fresh eggs.

Fill a pan with one inch (2.5cm) of water from a boiling kettle and put it on a gentle heat. When you see tiny bubbles, break the eggs into individual bowls before slipping them into the water. Set the timer for 2 minutes, with the water barely simmering. When the two minutes is up, take the pan off the heat for ten minutes. Keep basting the tops of the eggs with hot water. Use a draining spoon to lift them out and dry on kitchen paper. 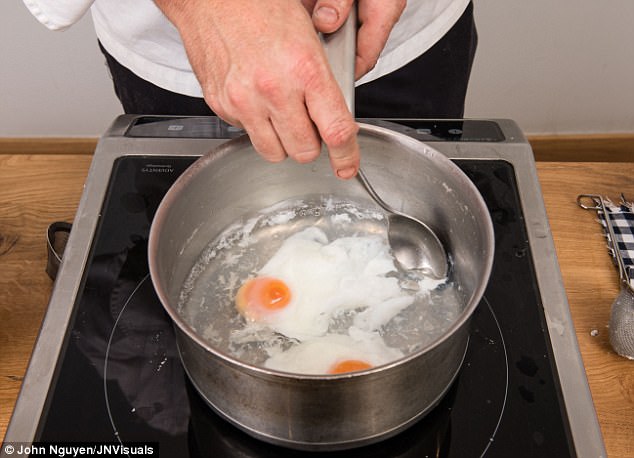 THEO SAYS: These flatten out and look more like fried eggs. It is certainly a purist’s method but all that waiting and basting won’t be for everyone.’

SARAH’S VERDICT: Disappointingly flat, rubbery on the bottom and almost solid. The one positive is the taste: they are creamy and almost melt in the mouth.

Jamie Oliver has offered several techniques in the past, but his latest way has a quirky twist. First, he spreads out cling film and drizzles some olive oil on it. Then, he lays the oiled cling film loosely over a ramekin dish, oil side up, and cracks an egg inside. He draws the cling film together and ties it in a knot. The resulting egg parcel is lowered into simmering water until it looks opaque (2-3 minutes). Pat dry, remove the cling film and serve.

THEO SAYS: ‘It’s fiddly to get the eggs into the cling film and even worse trying to get them out. The cooking time is far too short: to penetrate the plastic they need more like 5-6 minutes.’

SARAH’S VERDICT: Although the eggs look a little strange where the cling film was knotted, flip them over and they are perfectly presentable. Nothing can escape into the water, so they are bigger than the other eggs but taste quite watery and insipid. 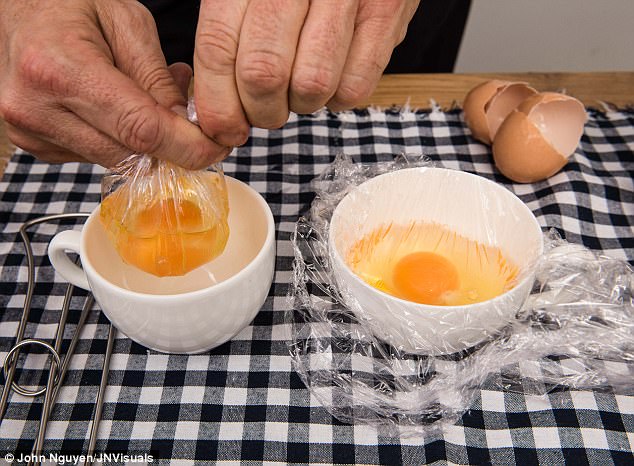 Bake Off judge Prue Leith uses a traditional method hailed as ‘infallible’ by the great cookery writer Elizabeth David. Her first requirement is ultra-fresh eggs, which give a bright yellow yolk. She recommends boiling a pan of water and dipping each egg, in its shell, into it for 30 seconds, using a suitable-sized spoon. Then, boil a pan of fresh water, add a dessertspoon of vinegar, stir until a whirlpool forms and break the eggs in. Cook for a minute to a minute and a half, then remove with a draining spoon.

THEO SAYS: ‘This is a fairly conventional method, except for the short poaching time.’

SARAH’ VERDICT: The yolks have detached from the whites slightly in the whirlpool, leaving them straggly. But they are still runny and soft inside.

Gordon Ramsay’s poached egg recipe has a little bit of everything. He boils a pan of water, seasons with salt and pepper and adds a teaspoon of white wine vinegar.

The vinegar helps the whites firm up: the acid affects a substance called albumen in the egg white, which sets the egg. Gordon cracks the eggs — kept at room temperature, so they cook faster — into ramekins. Using a large balloon whisk, he creates a fast-moving vortex of water and gently tips the eggs into the centre. The egg should take between 90 seconds and two minutes to poach. Remove with a slotted spoon; dry on kitchen paper.

THEO SAYS: ‘It makes sense to have a swirl in the water to shape the egg — and a whisk gives a stronger current than a spoon.’

SARAH’S VERDICT: There’s quite a lot of white left in the pan and the eggs have half-separated. The egg white looks more congealed than fluffy, while the imprecise poaching time means the yolks are harder, too — not ideal.

Next is Theo’s own recipe. He breaks his egg into a cup, boils a pan of water and seasons with a pinch of salt and one teaspoon of vinegar. Unlike most chefs, he doesn’t use white wine vinegar. Theo prefers red wine vinegar, which has a tarter, fruitier flavour. ‘You can taste it in the eggs,’ he says. ‘Balsamic would work well, too — just don’t use cheap old malt vinegar.’

Next, he uses a metal spoon to create a gentle whirlpool and lowers the eggs carefully into the centre, almost immersing the cup so they don’t fall from a height. He keeps the pan at a slow boil for three minutes.

THEO SAYS: ‘I like my eggs runny, so this is just right for me. They’re not as neat as the other eggs but it’s how they taste that matters.’

SARAH’S VERDICT: The red wine in the vinegar has given the eggs a creamier, almost pinkish tinge —they are certainly not as bright white as the others. But the white is well-cooked, the yolk is nicely oozy and they taste almost sweet. 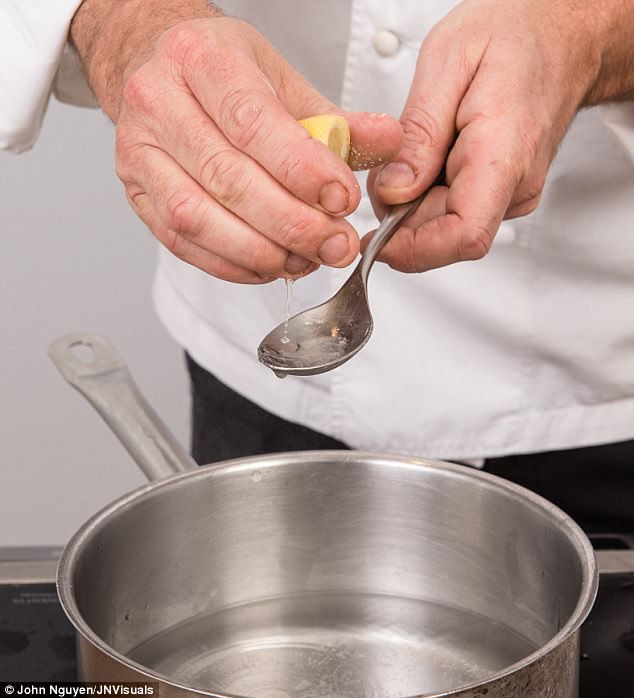 From her iconic 1861 tome Mrs Beeton’s Book of Household Management, this uses lemon juice instead of vinegar and calls for fresh but not newly laid eggs.

Mrs Beeton explains: ‘If poached before they have been laid 36 hours, the white is so milky that it is impossible to coagulate it.’

She suggests boiling water in a shallow saucepan or deep frying pan, adding salt and 1 teaspoon of lemon juice for each pint of water.

Break the eggs into a cup, tip into the water and reduce the heat. Tilt the pan and use a tablespoon to gently fold the white over the yolk. Simmer until the white is set, before using a fish slice to remove the egg.

THEO SAYS: ‘The low heat means the eggs spread out before you get round to coaxing the white over the yolk, but if you take your time they come together nicely. The tilting keeps the eggs neatly on one side of the pan. My biggest complaint is the amount of white left in the water — very messy.’

SARAH’S VERDICT: Far from the prettiest result but the whites are fluffy and evenly cooked, with a subtle lemony zing. This would be good for a large family, as the gentle technique means you can poach 4-6 eggs at once.

Like Delia, Mary Berry shuns vinegar and there isn’t a whirlpool in sight. In her 2013 book Mary Berry’s Cookery Course, she recommends cracking an egg on to a saucer first. Bring a medium-sized pan of water to the boil, add a pinch of salt and let it simmer.

Delicately slide the egg into the water and reduce the heat to low. Poach no more than one or two eggs at a time — any more and they may become tangled.

Mary advises gently swirling the water around the edges of the pan to curl the white into a neat shape. Simmer gently for about three minutes until the white is opaque, lift out with a slotted spoon and drain off excess water.

THEO SAYS: ‘It’s unusual to crack the egg on to a saucer first, as this encourages it to spread out when you want the yolk and white bunched together. But I can see the method in her slow swirling technique: there’s no risk the yolk will become detached from the white, and it forms a rustic but attractive shape.’

SARAH’S VERDICT: Small and perfectly formed. The yolk oozes out beautifully when you cut into it, while the white is silken and glossy. Impressive. 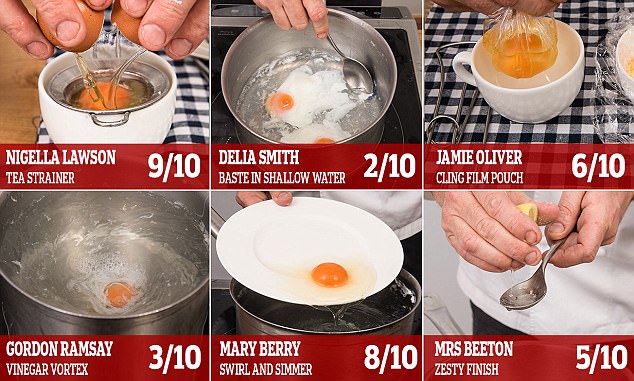 Nigella Lawson emerged triumphant in the poached egg challenge, beating her fellow celebrity chefs to score an admirable 9 out of 10