Whipsmart, witty, the boy wizard in The House With A Clock In Its Walls is hotter than Potter

The House With A Clock In Its Walls (12A)

The Little Stranger (12A)

The diminutive Jack Black is on towering form as an eccentric small-town warlock, those dancing eyebrows going like the clappers, in Eli Roth’s beguiling comedy- horror-fantasy, The House With A Clock In Its Walls.

Cate Blanchett is wonderful, too, as the benign witch next door. But matching both these movie stars every step of the way is a prodigiously talented youngster, Owen Vaccaro.

He plays ten-year-old orphan Lewis Barnavelt, who arrives to live with his Uncle Jonathan (Black) after his parents’ death in a car accident. Soon, Uncle Jonathan is teaching him spells. 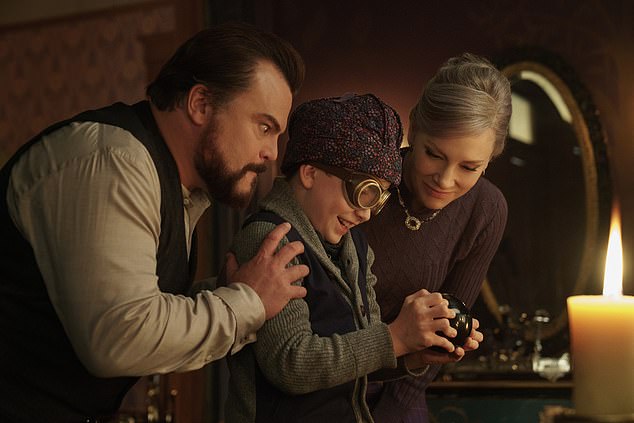 Ticking all the right boxes: Jack Black, Owen Vaccaro and Cate Blanchett in The House With A Clock In Its Walls

It’s a great yarn. How strange that nobody has made up stories about an orphaned boy wizard before. Or maybe they have. I forget.

Actually, one of the triumphs of this film is that it doesn’t seem at all derivative, and nor should it, since it is based on a novel by John Bellairs published in 1973.

That was about the time a primary schoolgirl called Joanne Rowling got to know some people in her Gloucestershire village called Potter and decided she liked the name.

The memory stayed with her into adulthood. But long before Harry Potter, there was Lewis Barnavelt.

This story is set in the mid-Fifties, in the fictional Michigan town of New Zebedee.

Roth, in tandem with his screenwriter Eric Kripke, nicely evokes the social conservatism of the Eisenhower-era Midwest, but there’s also a great scene in which Lewis learns wizardry accompanied by Little Richard singing Long Tall Sally.

Oddly, Rock Around The Clock doesn’t feature, but maybe they thought that would make one timepiece too many in a story that has lots already.

We first meet Lewis as he arrives in town on a bus. Uncle Jonathan, a former stage magician who went one step further and became a warlock, is his late mother’s brother.

Lewis has never met him, and Uncle Jonathan puts the ‘strange’ well and truly into ‘estranged’.

But then Lewis doesn’t fit in, either. He is bookish and bow-tied, wears goggles in homage to his favourite TV character and is duly bullied at his new school.

Moreover, he now lives at 100 High St, a prosaic address for the town’s spookiest house.

The house isn’t just spooky in a forbidding way, though. It has some dark secrets, but is also joyfully enchanted, full of furniture that often cheerfully, although sometimes balefully, comes alive.

They bicker a lot, but affectionately, although Florence emphasises that they are not romantically entwined. ‘Your uncle and I aren’t anything kissy-faced,’ she tells Lewis, who gradually warms to these two, distinctly odd, surrogate parents. 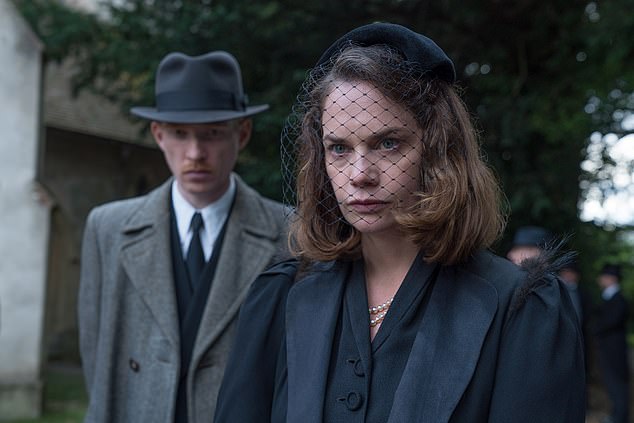 Like Meryl Streep and Judi Dench, Blanchett has the natural comic timing with which some, though by no means all, great straight actresses are blessed.

She’s a hoot, and appears to enjoy herself as much as you would expect in a role that requires her to shoot demonic Halloween pumpkins with her umbrella.

The malevolent pumpkins have been mobilised by Uncle Jonathan’s former showbiz partner, Isaac Izard (Kyle MacLachlan), who was an altogether decent fellow until, while serving in Germany during World War II, he was turned bad by an evil warlock he met in the Black Forest.

Before he died, he buried a magic clock deep within the walls of his house, which Uncle Jonathan now occupies.

If Izard comes back from the dead, the clock will be activated and will turn back time — with dire consequences for humanity.

Uncle Jonathan must find and stop it, not only for that reason, but also simply because the ticking gets on his nerves. That’s why he’s filled the house with other clocks, to drown out his torment.

It’s just as weird as it sounds, but huge fun, with some glorious special effects. In fact, it would be a nigh-on perfect family picture except that Roth is a horror film specialist (one of the so-called ‘splat pack’ — directors known for scenes of explicit violence and gore).

Just occasionally, that shows. So be warned that there are some images which might alarm the under-tens. But everyone else should be richly entertained.

Another seemingly haunted house is at the heart of The Little Stranger, which also has a post-war setting, although this is not affluent Fifties America but austerity-racked Britain.

It is 1948. Hundreds Hall in Warwickshire has belonged to the Ayres family for centuries, but crippling death duties have turned it into a slowly crumbling wreck.

‘The Labour government won’t be happy until we’re begging for our lives on street corners,’ grunts Roderick Ayres (Will Poulter), a dreadfully disfigured war veteran, who lives in the house with his brisk, spinster sister Caroline (Ruth Wilson) and their grand matriarch of a mother (Charlotte Rampling).

The film opens with a village doctor arriving to treat the family maid, Betty (Liv Hill). This is Dr Faraday (Domhnall Gleeson), whose late mother was herself once a servant at Hundreds Hall.

Faraday has broken free of his working-class origins. But as he befriends the family, and in particular Caroline, he can never quite escape the nuances of the English class system.

In some striking ways, the story, based on the 2009 novel by Sarah Waters, is reminiscent of L. P. Hartley’s The Go-Between.

Hundreds Hall is a place full of memories, not all of them pleasant. Faraday is fixated by the recollection of a boyhood visit to the house, nearly 30 years earlier, while the family appear to be haunted by another Ayres daughter, Susan, who died as a child.

All this coalesces into an effective blend of ghost story, social history and psychological thriller, which is no less compelling for being rather relentlessly gloomy.

Gleeson reprises the repressed Englishman role that he performed in last year’s Goodbye Christopher Robin, except more so.

He possibly could have injected just a little more animation into stiff Dr Faraday, who generally makes an Easter Island statue look like a song-and-dance man. But maybe that’s the point. In the parlance of the time, he’s rather a queer cove.

At any rate, director Lenny Abrahamson and screenwriter Lucinda Coxon have done a fine and powerful job with their source material and are rewarded with one truly mesmerising performance.

All the acting is good, but Wilson, as dutiful, unhappy Caroline, stands apart.

It’s Gone Girl, but with jokes thrown in

Paul Feig, a director known for making broad comedies with female protagonists, such as Bridesmaids (2011) and the 2016 Ghostbusters reboot, has come up with something slightly different: a darkly comic thriller that feels as if it might have been conceived by someone watching 2014’s Gone Girl and thinking, ‘this could do with a few laughs’.

It stars the reliably engaging Anna Kendrick as Stephanie, a widowed mother of a young son who video-blogs about home-baking and is a somewhat nervous, frumpy paragon of single-parenthood. 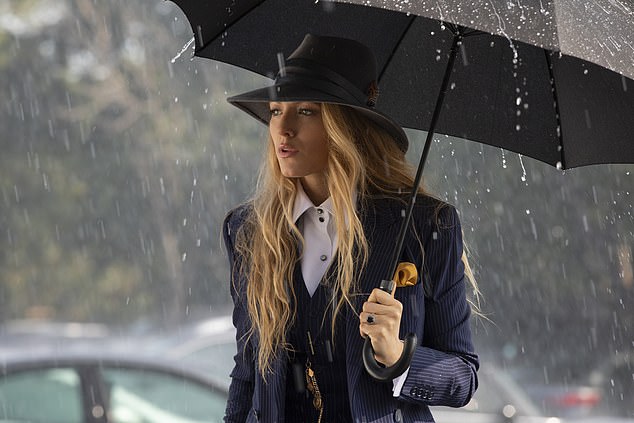 There’s a great deal to enjoy about A Simple Favour, but it falls on in the last third. Pictured: Blake as Emily

One day at the school gate in suburban Connecticut, Stephanie encounters her polar opposite: willowy, gorgeous Emily (Blake Lively).

She is a high-flying Manhattan fashion-company executive who would no sooner volunteer to make class cupcakes than wear Walmart dungarees, and can’t keep her hands off her dishy husband Sean, an English professor played by Henry Golding (currently making hearts flutter as the billionaire hunk in Crazy Rich Asians).

Despite their differences, the two women are soon friends, but then, after asking Stephanie to mind her son — the simple favour of the title — Emily goes missing. The police are called in, phone records are checked, lakes are dredged.

At first, Stephanie’s attempts to find her pal are restricted to appeals on her video-blog and putting up posters (‘I’ve never seen her pass up the chance to use a stapler,’ comments another parent, bitchily).

But gradually she turns into a proper sleuth, a self-raising Miss Marple, and in discovering a whole baking-tray of uncomfortable truths about Emily, also kind of finds herself.

It’s very slickly plotted and written — by Jessica Sharzer, adapting Darcey Bell’s novel — and Lively rises to one of the best roles of her career; she is a terrific foil to Kendrick.

Golding seems a little wooden, though it might just be his frightfully English accent. It’s a treat to see Rupert Friend in a cameo as a camp designer.

So all in all, there’s a great deal to enjoy. I confess I lost interest in the determinedly twisty plot about two-thirds of the way through, but maybe that was just me. I know plenty of people who loved it all the way to the end.