The world famous White Helmets, motor cycle display team of the Royal Signals has finally parked up their 750cc Triumph motorcycles for the last time after entertaining crowds for the past 90 years.

Seen as ‘too old fashioned’, the White Helmets, who were used as a recruitment tool, were once described as the Red Arrows of the Road.

All summer, as for almost a century, they have been entertaining crowds at country shows across the nation.

The White Helmets – Royal Signals Motorbike Display Team rode through Blandford Forum in north Dorset in front of hundreds of locals, who braved the threat of rain to see the classic Triumph Tiger 750cc motorcycles ride through the town 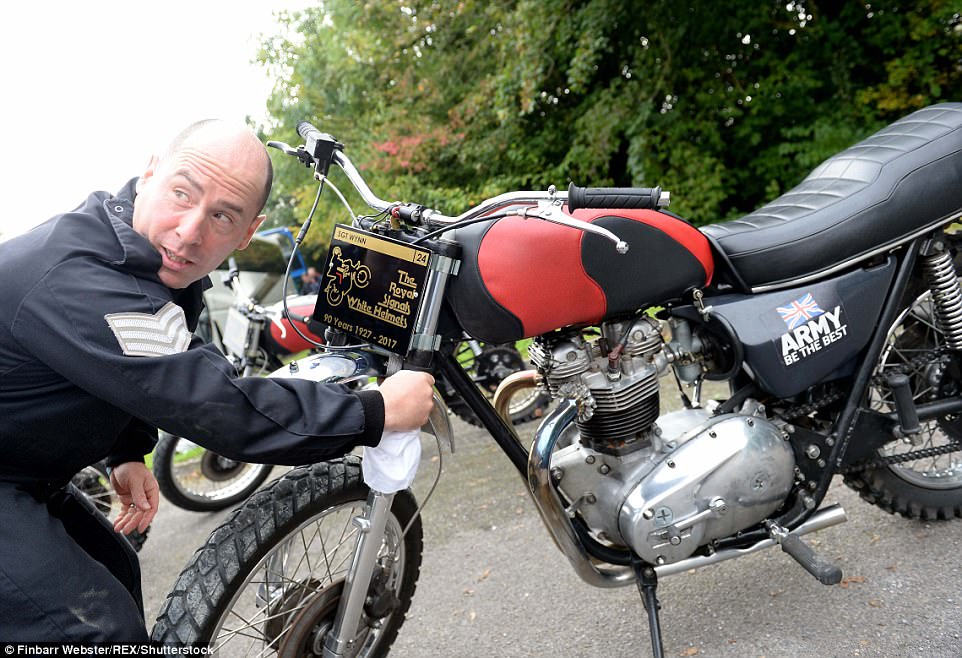 Despite only going on a brief trip through their local time, the Triumph Tigers were meticulously prepared by their riders 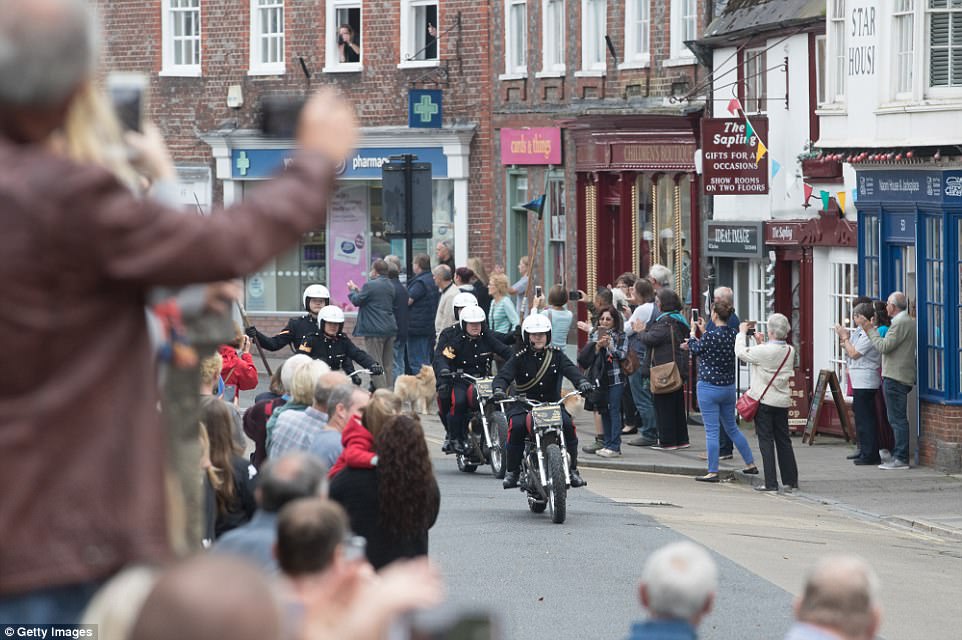 However, as a cost-cutting measure, the unit – who wowed crowds by jumping through fire and other acrobatic feats – have been mothballed.

Residents of their home town of Blandford Forum, near Dorset, witnessed their final ride as they paraded for the final time.

Millions of people have witnessed the display team, who date from a time when motor cycles were used to race messages across the battlefield.

Now those same messages are sent through cyberspace, negating the need for a motorcycle display team. 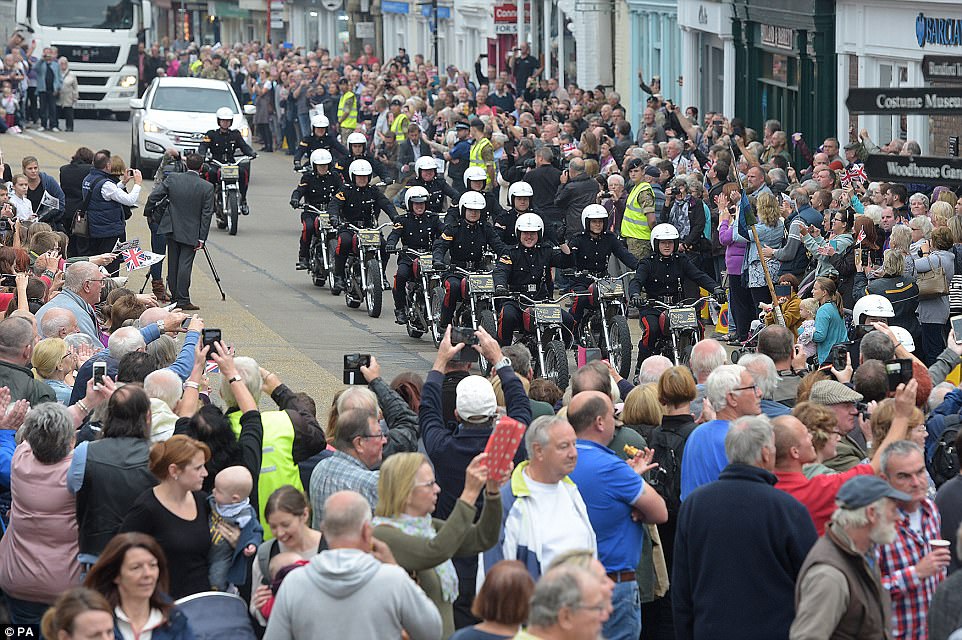 Over the past 90 years, millions of people have witnessed the display team, first on horses and then on motorbikes perform their daring displays which tested the limits of their machines and their highly trained riders 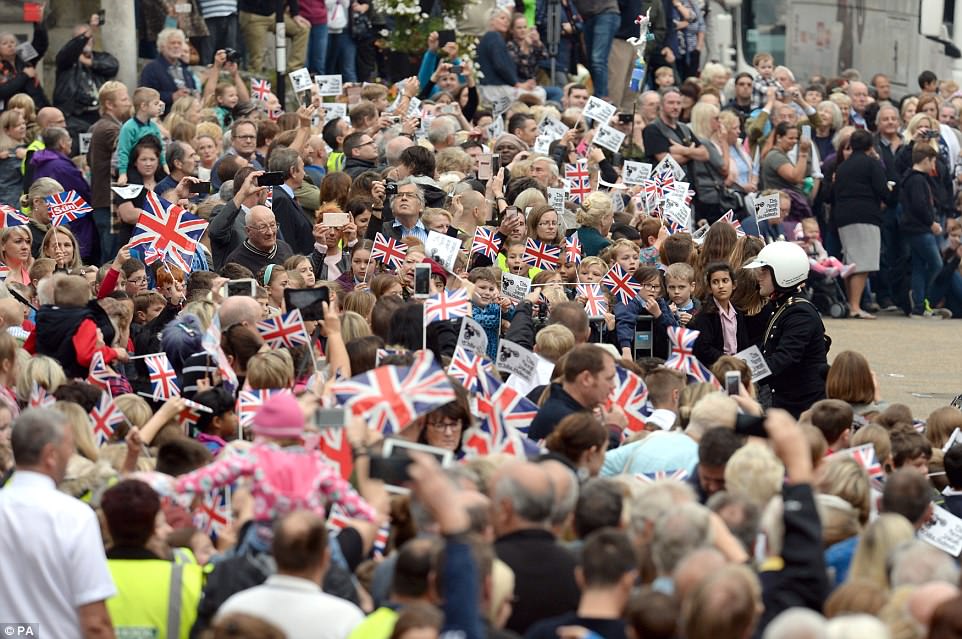 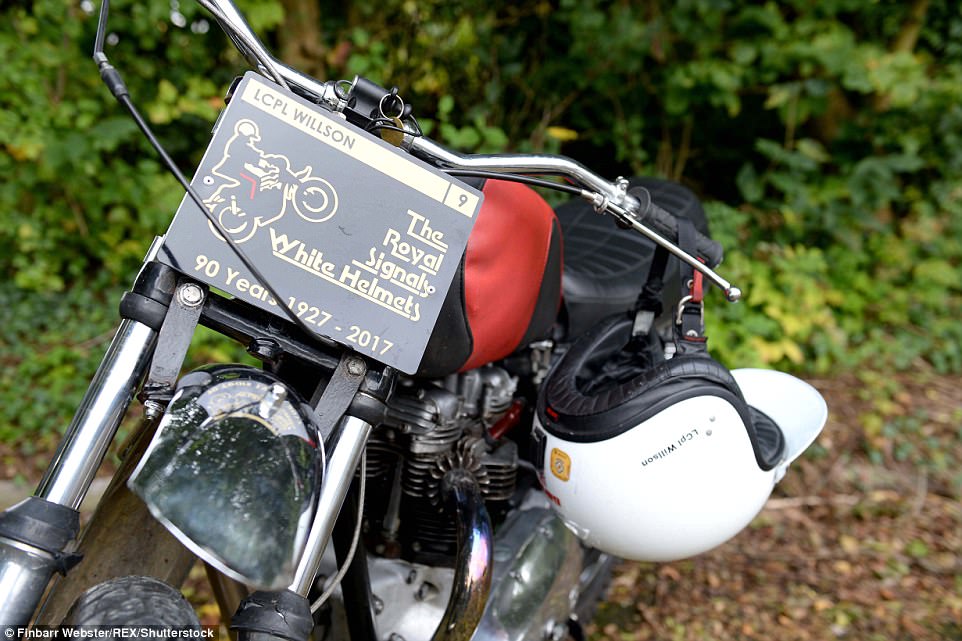 Since the 1970s, the team have ridden Triumph Tiger 750cc motorcycles, pictured, to perform their perilous stunts 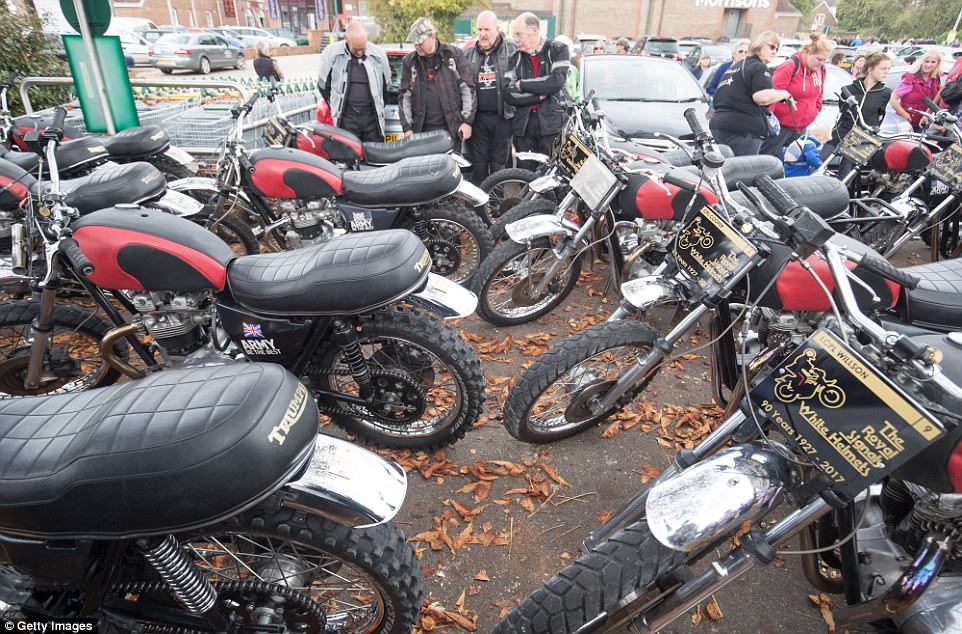 The White Helmets were founded in 1927 to show the British public the precision horsemanship and motorcycle riding skills required of Royal Signals soldiers when the use of dispatch riders to ferry communications was still a vital element of the battlefield however it has been decided that the display no longer reflect the reality of the high-tech communications of modern conflicts.

In their final month, they were at the Chatsworth Country Show in front of Chatsworth House, could not have been further from the battlefield environment from which the team was developed when it was founded 90 years ago.

Their final full public performance was at the Preston Military Show, where dozens of veterans of the display team attended.

The decision was made earlier this year to disband the White Helmets as the Royal Signals promotes its 21st century role at the cutting edge of digital technology and cyber warfare. 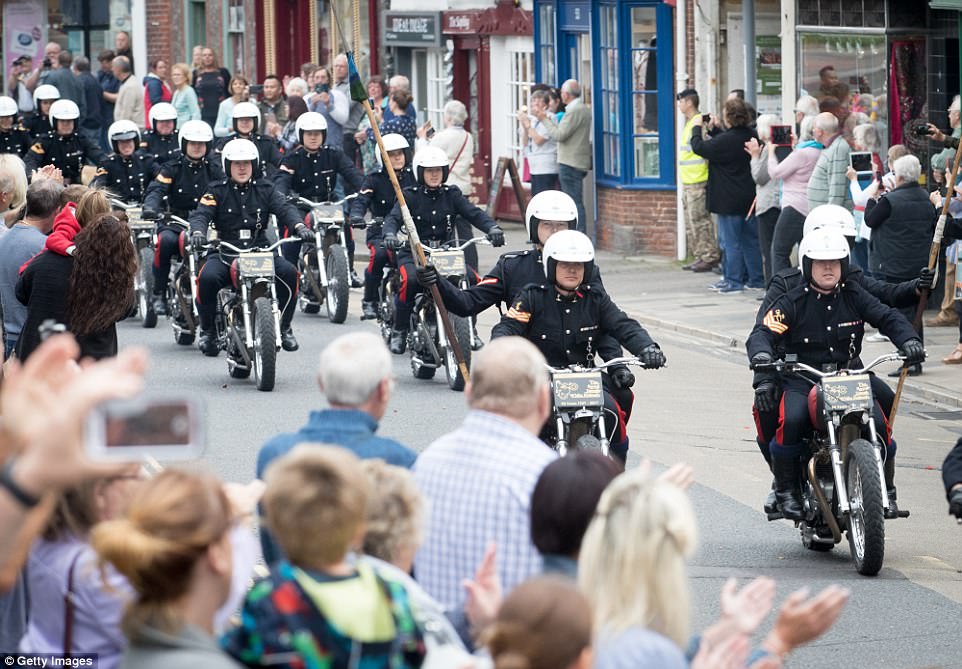 The White Helmets, pictured, are being disbanded by the army as they are viewed as being old fashioned

Capt McLelland said he understood the reasons for the decision to disband and was proud to be a member of the final line-up.

He said: ‘It’s a multitude of things but the main one being that it’s been a long time since we’ve used motorcycles to communicate around the battlefield.

‘It’s been 90 years the team’s being going – 1927 is when we were formed – and the Royal Signals is about cutting-edge technology, is about being leaders in the digital age, and it’s about modernising our image to show that we’re in line with that and, as such, unfortunately, the team’s being disbanded.’ 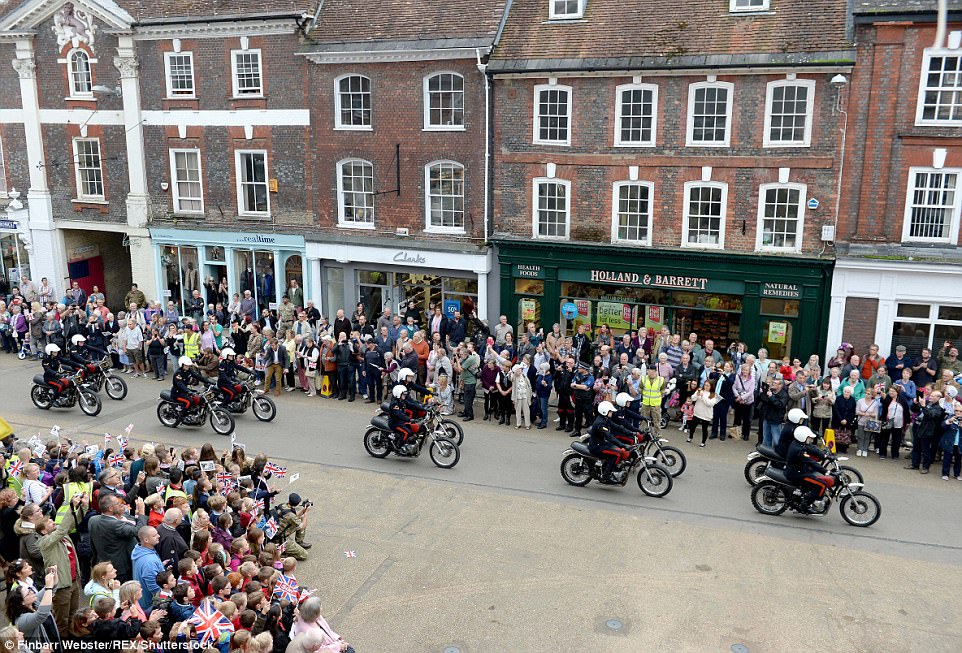 An Army spokesman said: ‘They Royal Corps of Signals have come far since using motorbikes to carry messages across the battlefield, and are now highly trained “Leaders in a Digital Age” with expertise in cyber operations 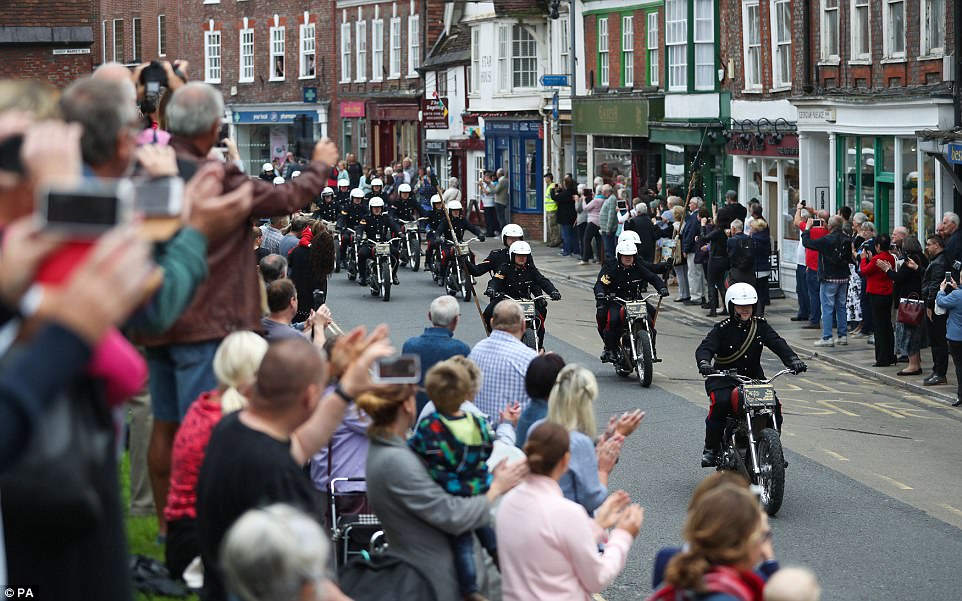 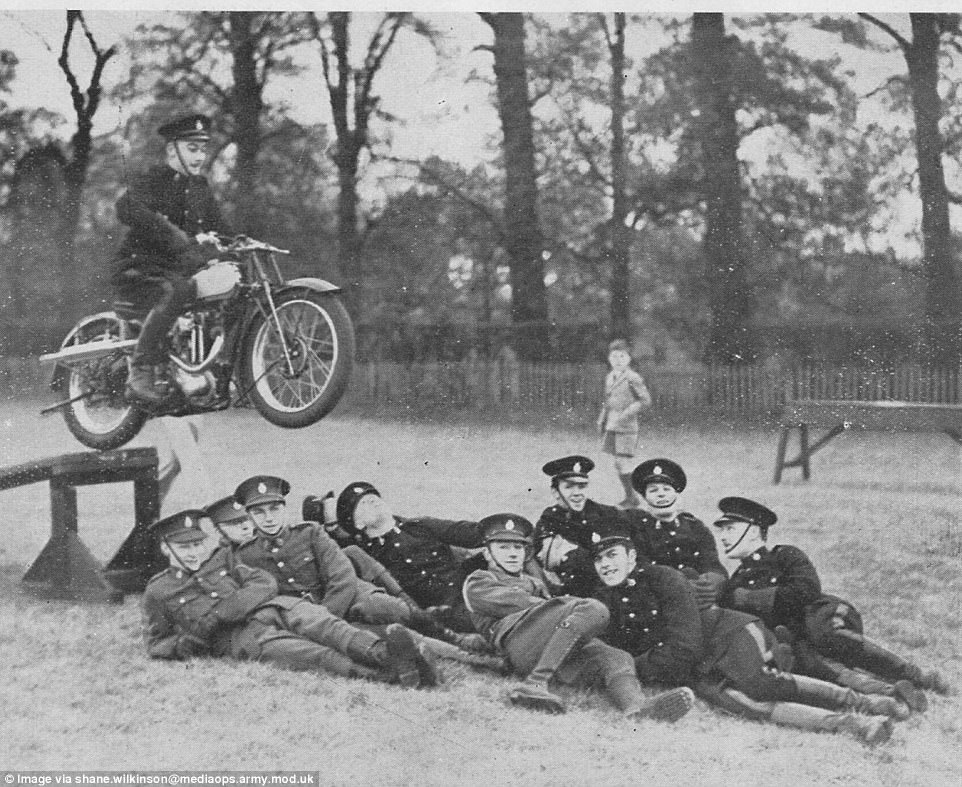 Leap of faith: The 1938 team demonstrate just how must trust they have in their captain 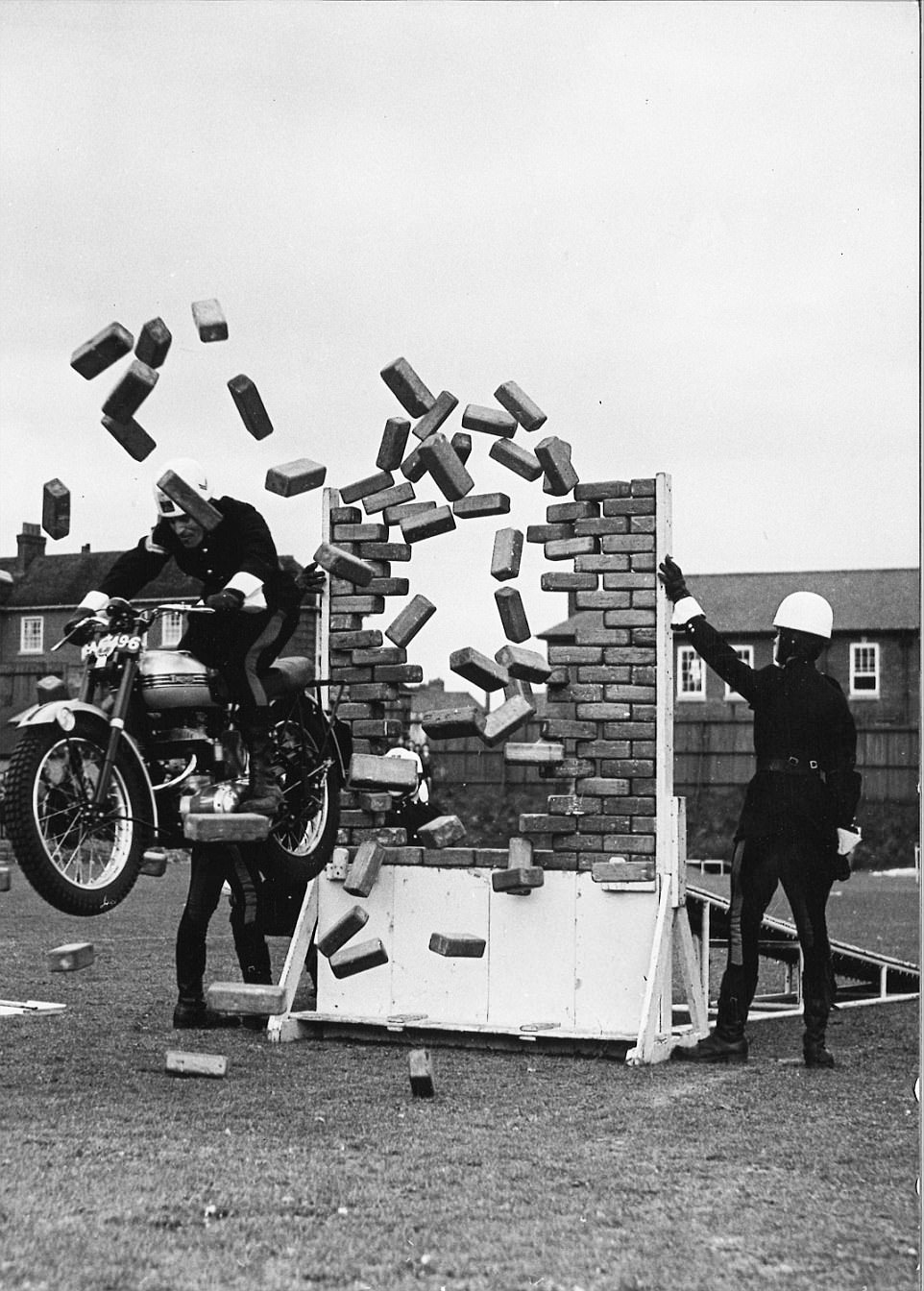 Smashing show: A White Helmet blasts through a brick wall in 1953 – the team later abandoned the trick 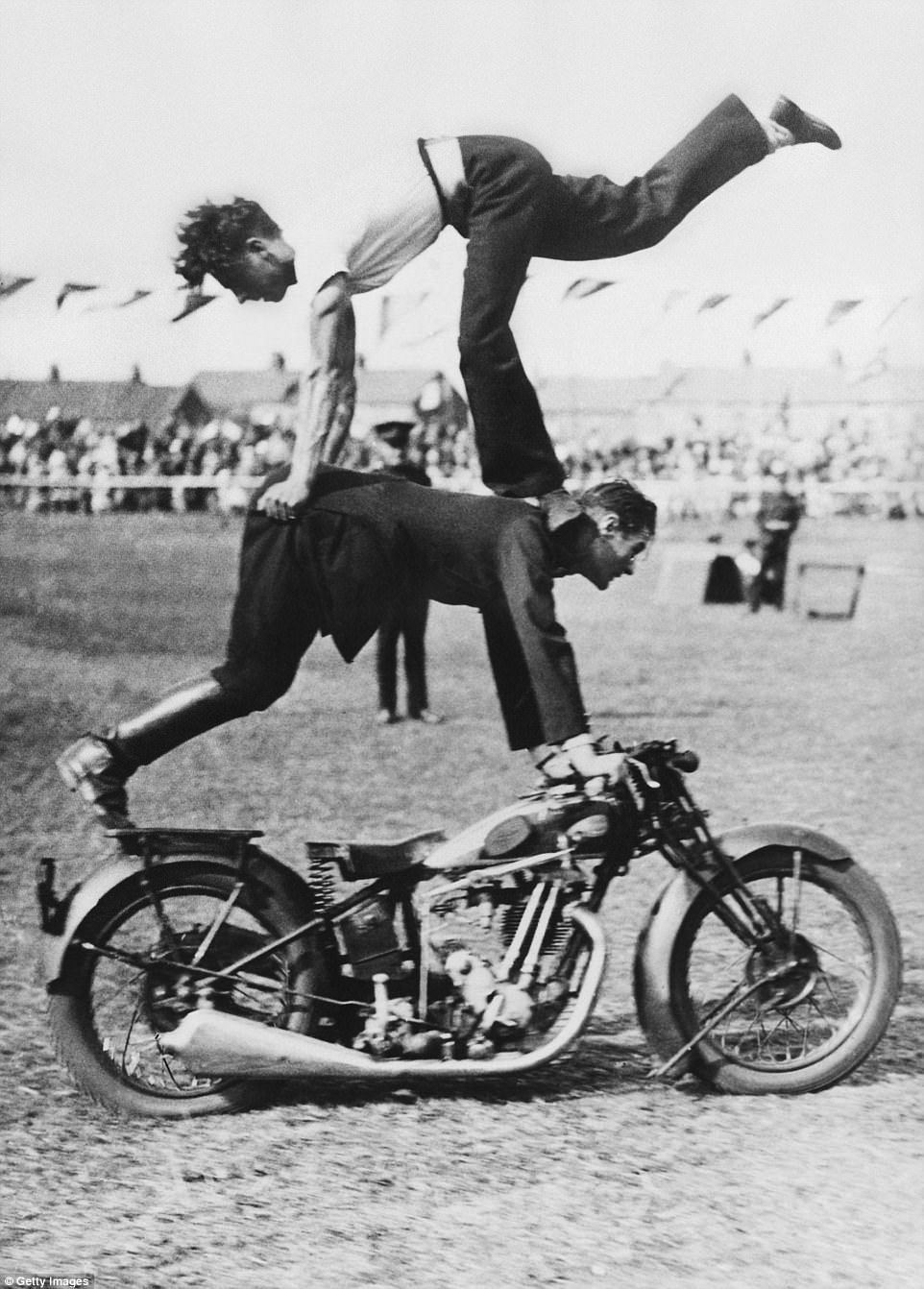 Look, no helmet! Demonstrating their skills at the Motorcycle Gymkhana at the  Great Barking Carnival in 1935 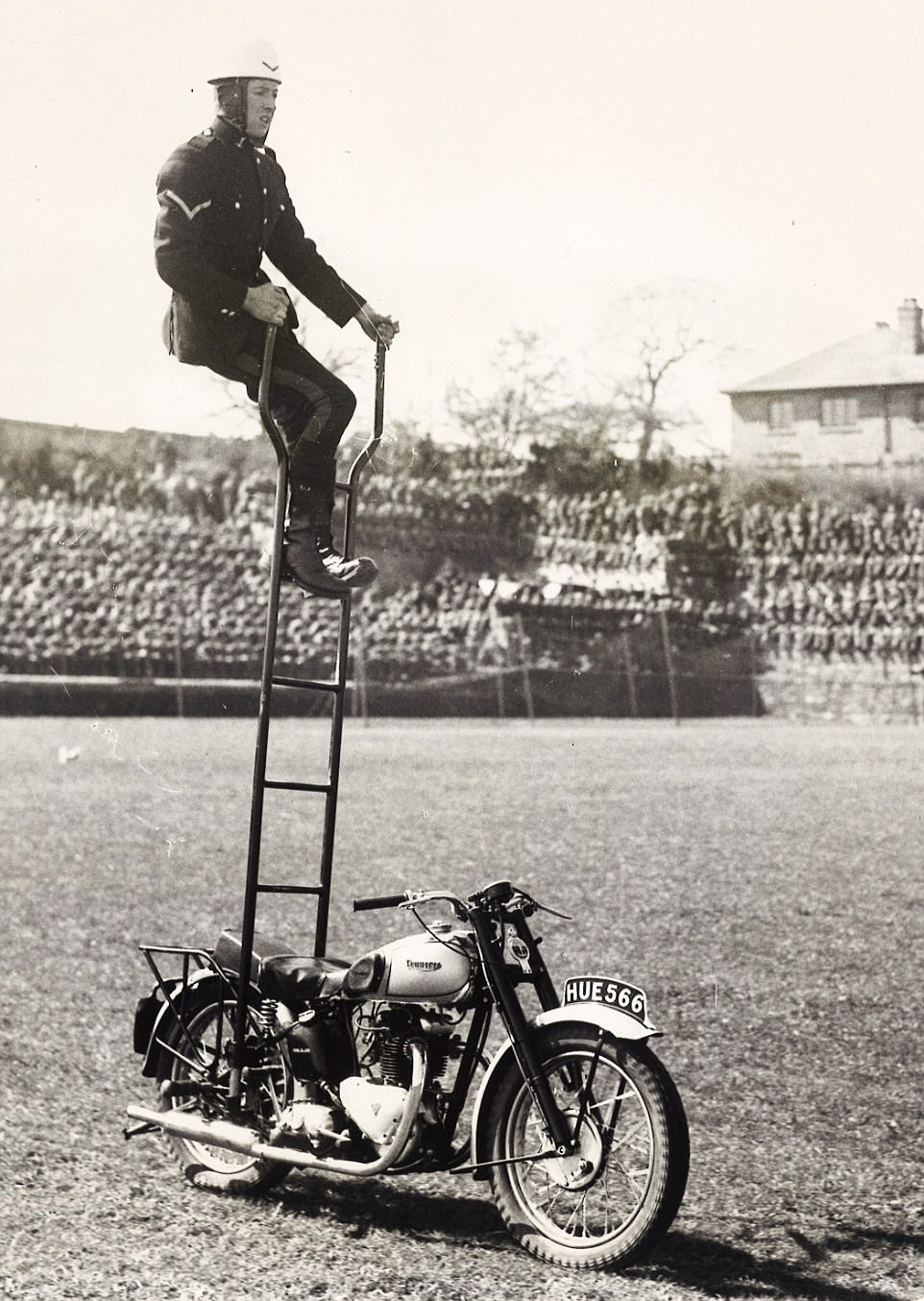 Rung-ho: Rehearsing the Forward Ladder in 1953. The rider goes up and over while the bike is still moving

Capt McLelland said: ‘I won’t lie, I am obviously disappointed. I am sad and I think every rider here is.

‘However, we’re very proud and privileged to have had the opportunity to be able to ride and be involved in such a unique job.

‘And also, to be here at the end, whilst it is a sad thing to do, it is a very proud moment for us – especially on the last show, it will certainly be a proud moment for everybody involved.’

The unit was formed in 1927 to showcase the skills used to carry messages in combat. The team, who always perform in full Royal Signals uniform, first used horses but these gave way to motorcycles in 1937, although many of the tricks they still perform are related to horseback stunts. They adopted the White Helmets title in 1963.

An Army spokesman said: ‘The Royal Corps of Signals have come far since using motorbikes to carry messages across the battlefield, and are now highly trained “Leaders in a Digital Age” with expertise in cyber operations. 2017 will be the last season for the iconic White Helmets Royal Signals Motorcycle Display Team.’ 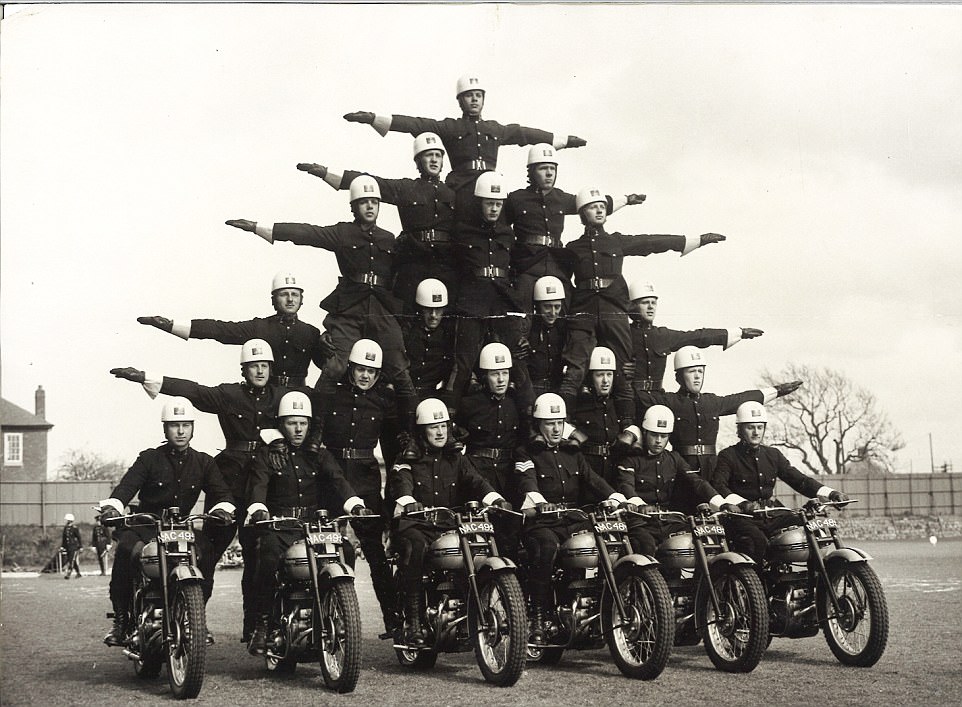 Grand finale: The Six-Bike Fan pyramid in 1955 was the climax of many a memorable display 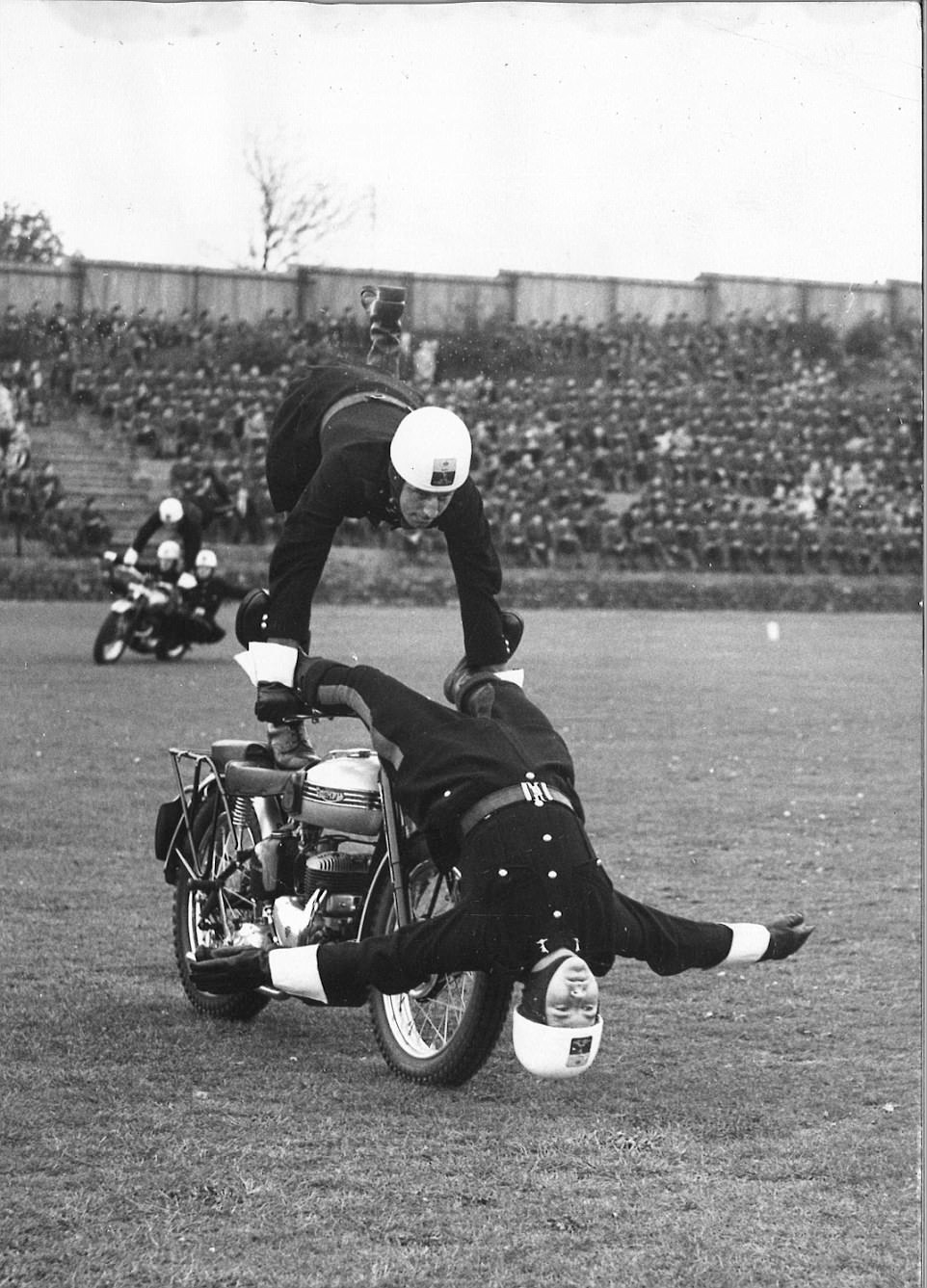 Stretching a point: This 1953 trick, known as the Flowerpots, was dropped as it was deemed as being ‘too easy’ 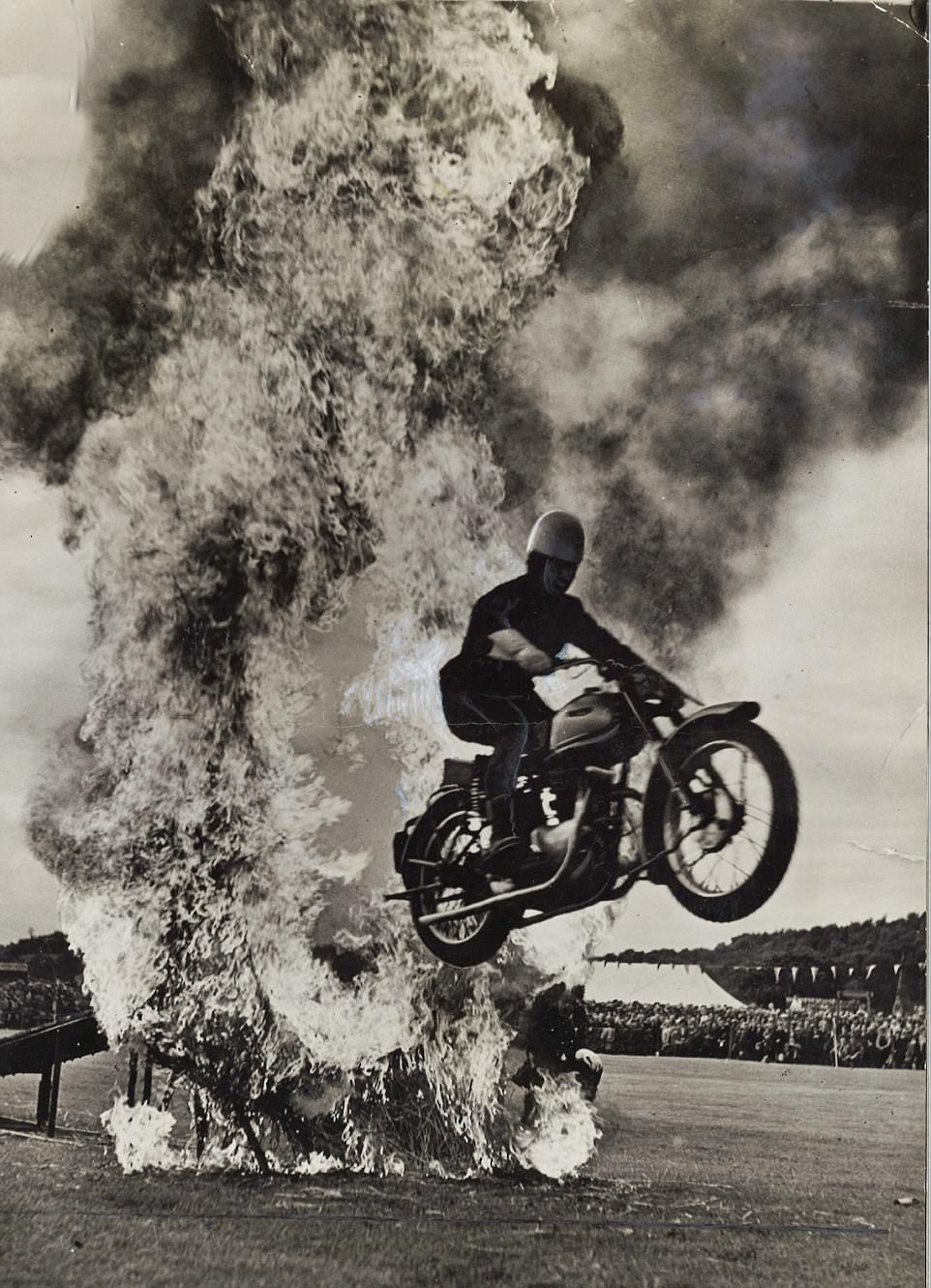 Flaming heck: Flying through the famous ring of fire in 1953 during a display at the Bridge of Alan, Perthshire