Donald Trump’s admission that he’s having ‘second thoughts’ about his China trade war is being ‘greatly misinterpreted,’ the White House says.

His press secretary claimed in a statement to reporters on Sunday afternoon that Trump’s only regret is that he didn’t hit China harder with tariffs.

‘President Trump responded in the affirmative – because he regrets not raising the tariffs higher,’ said Stephanie Grisham.

Trump raised existing tariffs on $250 billion of Chinese goods to 30 percent on Friday after Beijing slapped penalties on $75 billion worth of U.S. products, and he has more in the hopper on computers and other goods that’ll hit on Dec. 15.

Amid the dispute the Dow shed 623 points.

The president’s economics advisers insisted on a series of Sunday morning programs, and to White House press in Biarritz attending the G7 summit, that Trump did not mean to intimate that he was rethinking his trade war.

Donald Trump ‘s admission that he’s having ‘second thoughts’ about his China trade war is being ‘greatly misinterpreted,’ the White House says

Trump seemed to admit at a breakfast with Boris Johnson that he wasn’t entirely confident that his hard-line approach to China was the correct course of action.

‘I have second thoughts about everything,’ he told a pool reporter who asked him if he had ‘second thoughts’ about the escalating trade war between them.

He said he could declare a national emergency to force American businesses to cut ties with China, although he said ‘no plan’ has been drawn up, and insisted that world leaders hadn’t voiced displeasure with him.

‘I have no plan right now,’ he said. ‘Actually, we’re getting along very well with China right now. We’re talking. I think they want to make a deal much more than I do.’

He said, ‘We’re getting a lot of money in tariffs. It’s coming in by the billions. We never got 10 cents from China. So we’ll see what happens. But we are talking to China very seriously.’

The president said he’s not concerned that Wall Street does not appear to share his opinion. 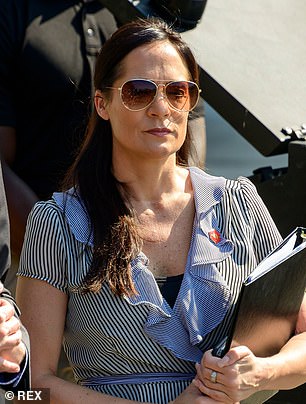 Stephanie Grisham, the White House spokeswoman, claimed Sunday that Trump’s only regret is that he didn’t hit China harder with tariffs

‘The market is doing great. Our country is doing great. Everybody was telling me, yesterday, people are trying to copy the formula. We’ve cut taxes way down. We got rid of regulations — large numbers — more than any president has gotten rid of. And we’re doing very well.’

He then claimed that none of his G7 counterparts had voiced opposition to his approach to China.

‘I think they respect the trade war,’ he’d claimed. ‘Nobody has told me that, and nobody would tell me that.’

At least one did. Johnson told him on camera that he ought to dial it down.

Trump claimed, ‘I’m not happy about it. But, again, he’s not in violation of an agreement.’

Still, the president claimed repeatedly that everyone was getting along, and some even agreed with him privately on the benefits of readmitting Russia.

Trump said a ‘number of people would like to see Russia back’ in the Group of Seven and it’s ‘certainly possible’ that Vladimir Putin will be invited next year.

He claimed in a bilateral meeting with Japanese Prime Minister Shinzo Abe, ‘I think that’s a work in progress. We have a number of people who would like to see Russia back.

Trump added, ‘I don’t know if we’ll make a decision one way or the other, but we did have a discussion about Russia last night, as to whether or not we want to invite them back.’ 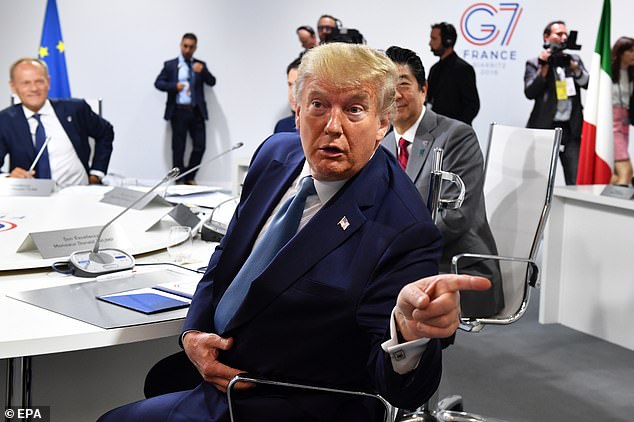 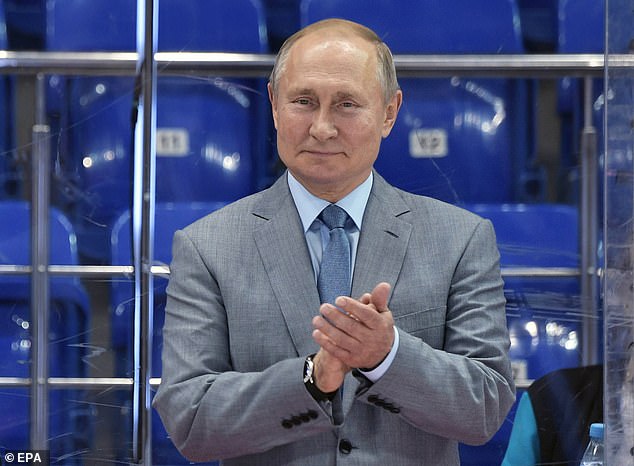 GOOD ONE, DONALD: Trump said Sunday that ‘some’ leaders favor adding Putin.  He refused to tell reporters which ones were pulling for Moscow priviately

‘Other people agree with me, and some people don’t necessarily agree,’ he said. ‘Maybe we won’t. Maybe we’ll just leave it the way it is.’

He declined to way which leaders agree with him, telling his press pool, ‘I could, but I don’t think it’s necessary.’

But he said he was surprised by a ‘couple’ of the voices speaking up in support of the proposition, because he didn’t think ‘they have a good relationship’ with Moscow.

‘No decision. No decision’s been made. We didn’t do a vote or anything,’ he said of the ‘ongoing’ discussions on Russia.

Trump first revealed that G7 leaders had a ‘lively discussion’ about Russia in a breakfast with the UK’s Boris Johnson.

Asked if they talked about Putin, and whether he’d be invited to attend next year’s gathering, which will be held in the United States, on Sunday morning, Trump said they did.

‘That, I don’t know. We did discuss it,’ he said, adding that it’s ‘certainly possible’ that Putin could be invited.

Trump said then that a ‘lively’ and ‘really good’ discussion took place, with Johnson adding: ‘It was lively.’

The UK prime minister did not confront Trump in the meeting, but he said ahead of the summit that Russia should not be readmitted.

He cited the occupation of Ukraine and the poisoning of a former double agent living in England.

The only other G7 leader who’s publicly supported Trump’s position is the Italian prime minster, and he’s currently a lame duck.

Over a meal of scrambled eggs, veal sausage, toast and a trade deal on Sunday morning in Biarritz, Trump said that Johnson is the ‘right man for the job’ and will be a ‘fantastic prime minister’ who can deliver on Brexit and a trade deal.

However, differences between the men on the very subject quickly emerged, as Trump admitted he’s having ‘second thoughts’ about his assault on China, and Johnson advised him to dial it back.

‘But just to register the faint, sheep-like note of our view on the trade war, we’re in favor of trade peace on the whole, and dialing it down if we can,’ Johnson told him. 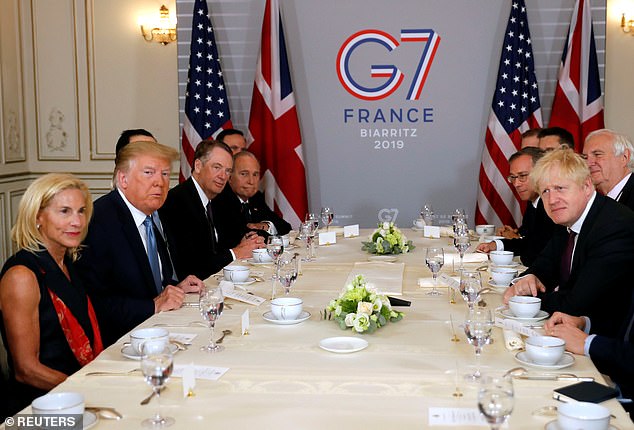 Donald Trump was disappointed with his coverage the first day of the summit. He complained about alleged ‘fake news’ in a series of tweets on Sunday morning

Trump had claimed earlier in the breakfast that he wasn’t getting any push back on his escalating dispute with China from other leaders at the summit.

‘No. Not at all. I haven’t heard that at all, no. I think they respect the trade war,’ he’d claimed. ‘So, the answer is, nobody has told me that, and nobody would tell me that.’

Johnson reproached him several minutes later, saying in response to a question from a reporter that the UK has ‘profited massively in the last 200 years from free trade, and that’s what we want to see.’

‘We don’t like tariffs on the whole,’ he acknowledged.

Laughing the statement off, Trump took a swipe at ex-British Prime Minister Theresa May, and said, ‘How about the last three years?

‘Don’t talk about the last three. Two-hundred, I agree with you,’ he told his friend.

Johnson declined to play crossing guard and the let the bus roll right over his predecessor and former party leader.

He said that Britain is not able to to sell lamb, pork pies or beef to the United States at present.

‘And there are clearly huge opportunities for the UK to penetrate the American market in the way that we currently don’t. And we’re very interested to talk about that with you,’ he said.

Trump seemed to be missing the flares that Johnson was sending up.

‘They won’t have the anchor around their ankle,’ he said of the UK’s plans to leave the EU.

Johnson replied, ‘Talking of the anchor, Donald, what we want is for our ships to take freight, say, from New York to Boston, which for the moment they’re not able to do.’

The conservative politician predicted before the breakfast that the allied nations would have a ‘fantastic deal once we clear up some of the obstacles in our path,’ and Trump agreed saying Brexit will be a ‘fantastic thing for us.’

‘We’re talking about many different deals, but we’re having a good time,’ the U.S. president said. ‘As far as UK and the United States, we’re working on a very big trade deal and I think it’s going to work out very well.’ 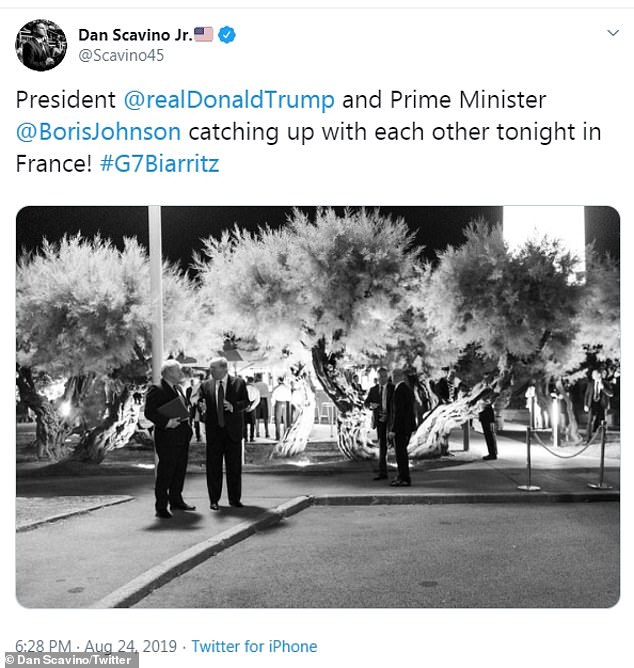 Trump  also had a private chat at a Saturday night dinner, the White House revealed in a photo of the men conversing alone on the sidelines of the summit

Trump and Johnson have been negotiating directly on a US-UK trade deal, hammering out the details of a trade deal in weekly phone calls with another. They last spoke on Friday, just before Trump’s departure from Washington.

They also had a private chat at a Saturday night dinner, the White House revealed in a photo of the men conversing alone on the sidelines of the summit.

And yet, on several topics, they did not appear to be on the same page. Trump said in early-morning tweets that it’s American media that’s out of step.

Trump griped: ‘Such False and Inaccurate reporting thus far on the G-7. The Fake News knows this but they can’t help themselves! Leaving now to have breakfast with Boris J.’

‘Before I arrived in France, the Fake and Disgusting News was saying that relations with the 6 others countries in the G-7 are very tense, and that the two days of meetings will be a disaster.

He claimed, ‘Just like they are trying to force a Recession, they are trying to “will” America into bad Economic times, the worse the better, anything to make my Election more difficult to win. Well, we are having very good meetings, the Leaders are getting along very well, and our Country, economically, is doing great – the talk of the world!’ 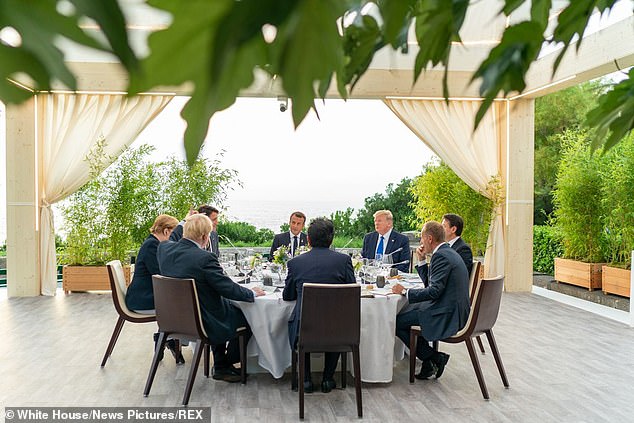 In this White House handout photo, President Trump joins G7 Leaders for dinner Saturday evening at the Biarritz Lighthouse. Trump says they had a ‘lively discussion’ about Russia

He was lashing out over coverage of his spat with French President Emmanuel Macon, whom he had lunch with on Saturday.

‘France and President @EmmanuelMacron have done a really great job thus far with a very important G-7. Lunch with Emmanuel was the best meeting we have yet had. Likewise, evening meeting with World Leaders went very well. Progress being made!’ he insisted on Saturday night.

He also claimed, ‘Our great Economy is the talk of everyone!’

Earlier in the day, he’d tweeted, ‘Just had lunch with French President @EmmanuelMacron. Many good things are happening for both of our countries. Big weekend with other world leaders!’ 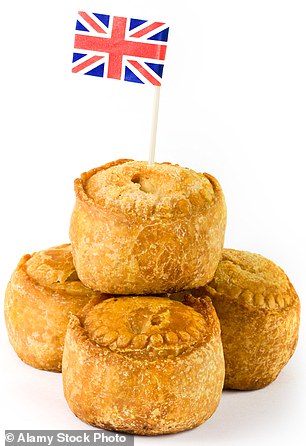 Trump had threatened to tax French wine before he left Washington in retaliation for a planned digital tax on companies like Amazon. Intercepting him at his hotel, Macron invited Trump to an unscheduled lunch, where he told the U.S. leader how honored he was to have him in France.

That dispute had garnered heightened coverage in U.S. press, with little attention being paid to the fact that Johnson had warned Trump on his way to France that a ‘fantastic’ post-Brexit trade deal could not happen until he lifts restrictions on the sale of British pork pies, cauliflowers and shower trays.

Johnson told reporters on the flight to the G7 that negotiations were ‘not all going to be plain sailing.’

‘Melton Mowbray pork pies, which are sold in Thailand and in Iceland, are currently unable to enter the US market because of…some sort of food and drug administration restriction,’ he said. ‘Cauliflowers currently, under US Department of Agriculture restrictions, can only enter specified ports.’

The British prime minister said, ‘We’ve sold 250,000 shower trays around the world [but] there is some kind of bureaucratic obstacle that stops us selling them in the US because they are allegedly too low.’