The White House is actively trying to put together an Arab fighting force that could replace American troops in Syria, allowing President Trump to make good on his promise that U.S. soldiers deployed there would be coming home soon.

Not only does President Trump want Saudi Arabia, Qatar and the United Arab Emirates to donate billions of dollars to the war effort, the Wall Street Journal is reporting, he’s asking them to commit troops to the war-torn Middle East country, too.

According to WSJ, the president’s new national security advisor, John Bolton, asked Egypt’s acting intelligence chief officer, Abbas Kamel, if Cairo would be willing to put boots on the ground in Syria.

The White House is actively trying to put together an Arab fighting force that could replace American troops in Syria, like the ones seen here in March of 2017 in Aleppo 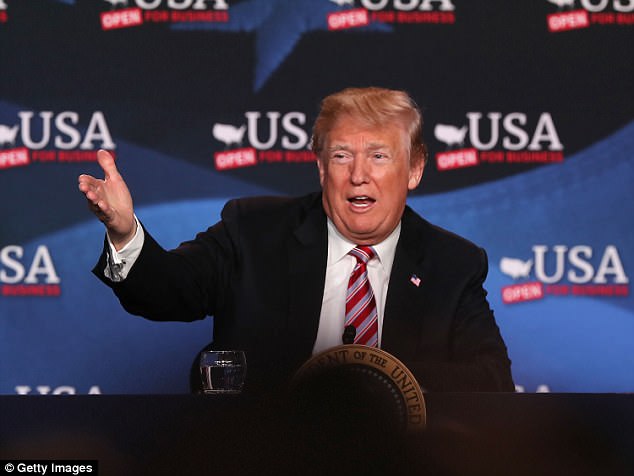 Trump has asked Arab nations for billions of dollars for the war effort. Now, he wants them to send in troops, too 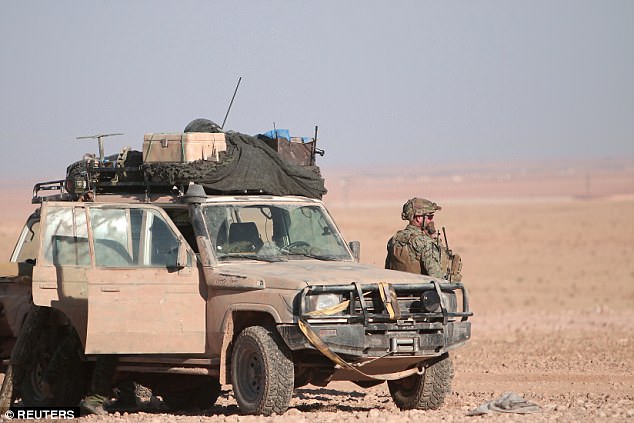 A U.S. fighter stands near a military vehicle, north of Raqqa city, Syria in November of 2016. The U.S. has roughly 2,000 troops in Syria at present

A U.S. official also told the publication that ‘Saudi Arabia, Qatar and the U.A.E. have all been approached with respect to financial support and more broadly to contribute.’

An Arab fighting force would be chalked full of complications. Saudi Arabia and Qatar are locked in an intense regional dispute. The UAE, Bahrain and Egypt joined Saudi Arabia in cutting ties with Qatar last summer over the Gulf state’s alleged support for extremists.

At an end-of-March event, Trump suggested that a plan was nearly in place when he said, ‘We’re knocking the hell out of ISIS. We’ll be coming out of Syria, like, very soon.

‘Let the other people take care of it now,’ he added.

But that was before Syrian dictator Bashar al-Assad carried out a deadly chemical weapons attack on the rebel-held town of Douma.

In a national address Trump argued that the airstrikes were vital to the national security interests of the United States.

‘We are prepared to sustain this response until the Syrian regime stops its use of prohibited chemical agents,’ he pledged.

But Trump also said the United States’ friends in the Middle East needed to assist in the long-term effort to stabilize Syria.

‘We have asked our partners to take greater responsibility for securing their home region, including contributing large amounts of money for the resources, equipment, and all of the anti-ISIS effort,’ he said.

‘Increased engagement from our friends, including Saudi Arabia, the United Arab Emirates, Qatar, Egypt, and others can ensure that Iran does not profit from the eradication of ISIS.’

President Trump has met with or has plans to meet with heads of state from each of the countries, with the exception of Egypt, in recent weeks as he considers what to do when a deadline to extricate the United States from the Iran nuclear deal arrives next month.

European officials are begging the U.S. not to back out of the 2015 deal that gave Iran sanctions relief so it would halt its nuclear weapons program. However, Iran’s illicit ballistic missile development, terror financing and support for Assad in Syria have tempted Trump to follow through on a campaign promise to tear it up.

Next week Trump will host French President Emmanuel Macron at the White House for the first state dinner of his 14-month presidency.

The Iran deal is likely to come up as the two leaders discuss the quagmire in Syria.

Yesterday, Trump’s spokeswoman pushed back on a boast from Macron that he had persuaded President Trump to keep U.S. troops in Syria.

Sarah Sanders reaffirmed that the United States’ policy has not changed, and it would still like to pull American soldiers deployed in Syria out as soon as feasible.

At a National Security Council meeting Trump is said to have requested that the troops come home in the next six months.

Sanders wouldn’t confirm that timeline to reporters on Monday.

‘We don’t have a timeframe on it,’ she said. ‘It’s not based on an arbitrary timeline, but on defeating ISIS and also getting the Gulf partners in the region to step up and do more both militarily and financially.’