The White House isn’t ruling out a future presidential pardon for embattled Trump attorney Michael Cohen, who is facing a criminal probe over hush-money payments to women who claim to have bedded the president.

Press Secretary Sarah Sanders told reporters on Monday that ‘it’s hard to close the door on something that hasn’t taken place.’

That could mean merely that pardons are generally not awarded pre-emptively – only after convictions.

But the turn of phrase left political reporters unsure what she meant, especially since it was the second time Sanders was asked the question in the space of just a few hours. 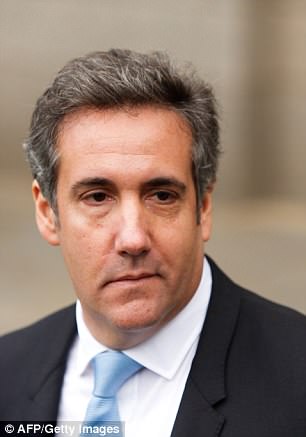 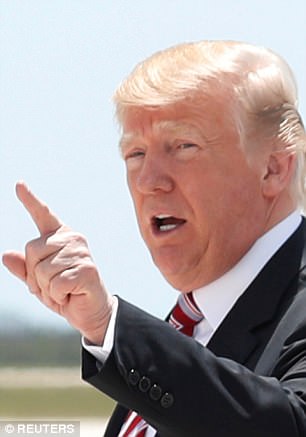 Cohen (left) is under investigation for campaign finance violations and bank fraud related to payoffs made to women who claim to have slept with Trump (right), who has the power to pardon anyone in the nation 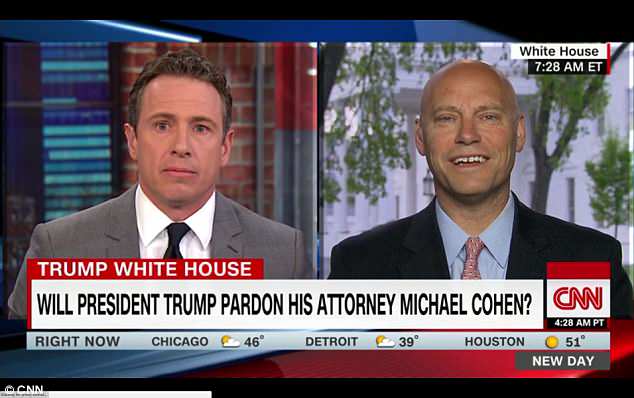 She told journalists Monday morning on the North Lawn of the White House: ‘I don’t think that we are going to talk about hypotheticals that don’t exist right now.’

Sanders expanded that idea during her afternoon briefing, describing a future pardon decision as impacting a hypothetical situation … that may or may not ever happen.’

She referred future questions to Cohen’s and Trump’s lawyers. 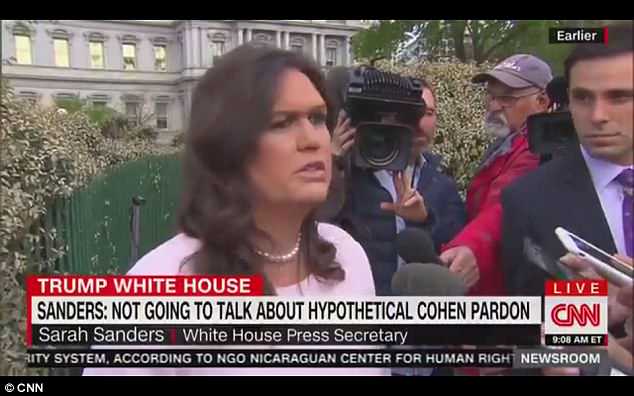 ‘I would imagine if he did that there’d be quite an outcry from your network,’ Short said.

Trump attacked a New York Times reporter on Saturday for writing that his lawyers are bracing for Cohen to turn against him by cooperating with the FBI.

‘Most people will flip if the Government lets them out of trouble, even if it means lying or making up stories,’ the president tweeted. ‘Sorry, I don’t see Michael doing that despite the horrible Witch Hunt and the dishonest media!’ 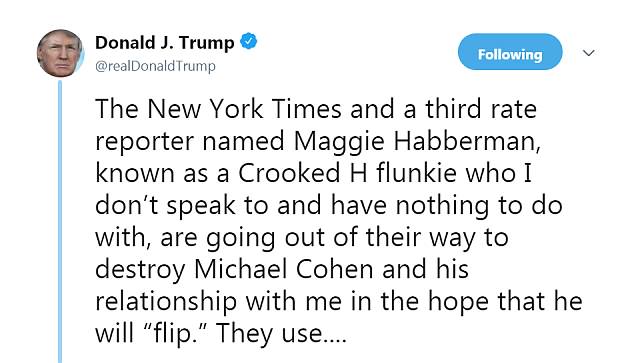 In a string of tweets on Saturday morning, Trump defended Cohen and said he doesn’t believe he’ll cooperate with federal investigators or ‘flip’ on him

Earlier, he took aim at New York Times reporter Maggie Haberman, who reported Friday that it was a ‘strong possibility’ Cohen would cooperate to save his own skin.

Trump called Haberman ‘third rate’ on Saturday, and declared Cohen is ‘a fine person with a wonderful family.’

‘Michael is a businessman for his own account/lawyer who I have always liked & respected,’ he continued.