New details have emerged about the suspected white supremacist who authorities in Massachusetts say crashed into a home and executed two black bystanders in an alleged hate crime, including that he was a married physical therapist with a doctorate.

The gunman, identified as 28-year-old Nathan Allen, was shot and killed by a Winthrop police sergeant on Saturday, after officials say Allen crashed a stolen truck into a building and then gunned down David Green, a 68-year-old retired Massachusetts State Police trooper, and Romana Cooper, a 60-year-old Air Force veteran, both black.

Rollins added that Allen walked by several other people who were not black and didn’t harm them.

Pictured: Nathan Allen, 28, is seen in a driver’s license photo provided by DA Rachael Rollins . Allen has been identified as the suspect who shot and killed two black bystanders in Saturday’s alleged hate crime attack 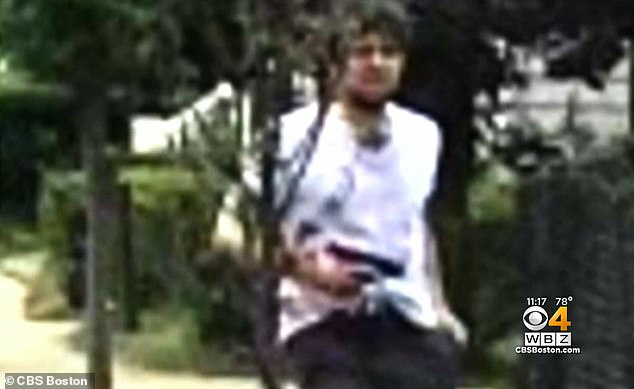 Allen is seen brandishing a gun during the deadly incident in Winthrop, Massachusetts 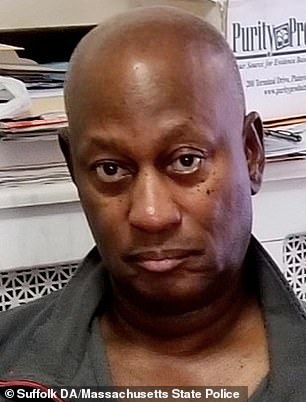 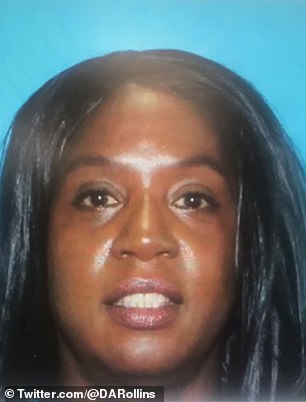 One of the victims was David Green, 58, a retired Massachusetts state trooper who served for 36 years and was described as the ‘quintessential pro.’ The second victim was Ramona Cooper, 60, a retired Air Force staff sergeant

‘They are alive,’ she said. ‘Two visible people of color are not. It could have been many, many more.”

In a tweet on Monday mourning the two victims, Massachusetts Gov. Charlie Baker called the deadly attack in Winthrop a ‘despicable act.’

Before Saturday’s fatal encounter, Allen wasn’t on the DA’s office’s radar. He was married, employed as a physical therapist, had a doctorate and no criminal history, Rollins said.

‘To all external sources he likely appeared unassuming,’ she said.

‘And then, yesterday afternoon he stole a box truck, crashed it into another vehicle and a property, walked away from the wreckage interacting with multiple individuals and choosing only to shoot and kill the two black people he encountered.’

Green’s longtime friend, Nick Tsiotos, said the two had coffee together just hours before the attack. He said the retired trooper had been sitting outside his home and tried to help after hearing the crash.

‘He went out and tried to do what he was doing for 36 years with the state police: trying to help save lives and help save people,’ Tsiotos, who attended high school with Green, told WCVB-TV. ‘I really believe he saved people’s lives. Dave probably stopped him from going into homes and killing people.’

‘Trooper Green was widely respected and well-liked by his fellow Troopers, several of whom yesterday described him as a ‘true gentleman’ and always courteous to the public and meticulous in his duties,’ Mason said in a statement. ‘From what we learned yesterday, he was held in equally-high regard by his neighbors and friends in Winthrop.’

Cooper’s son, Gary Cooper Jr, remembered his mother as ‘caring and selfless’ and always ready to help anyone in need.

‘We are heartbroken and she will be missed, just a senseless thing to have happened,’ he said in a statement to WCVB-TV.

Others placed flowers bouquets and other remembrances on the temporary fencing around the destroyed building over the weekend.

‘Praying you are dancing in the sunshine and singing with the angels,’ one note on the makeshift shrine read, The Boston Globe reported. 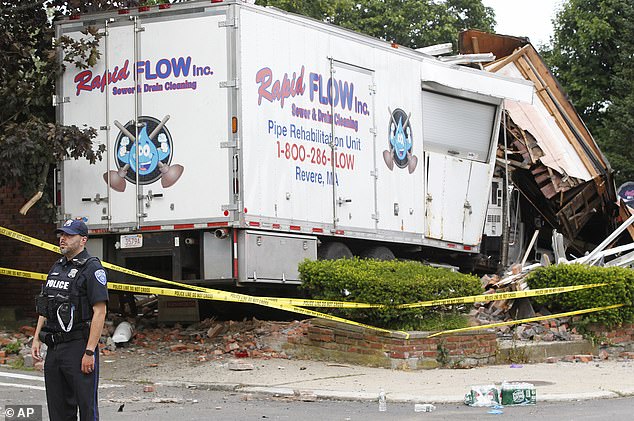 A gunman has shot two people in suburban Boston before being shot by police, in an incident that saw a plumbing truck crash into the side of a house 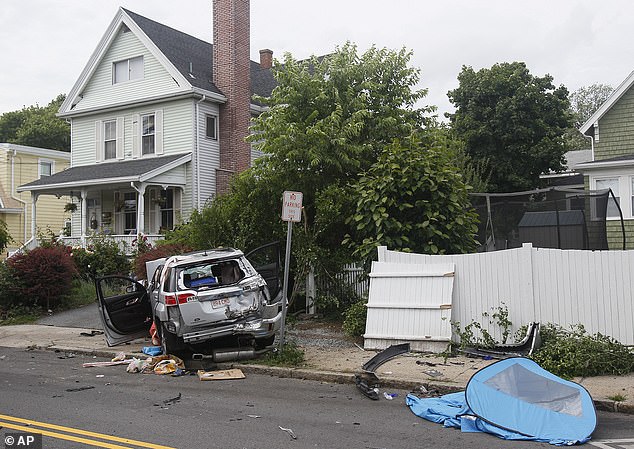 In this Saturday photo, the wreckage of a car sits on a sidewalk after a stolen truck collided it and crashed into a building before a suspect fatally shot two people in Winthrop 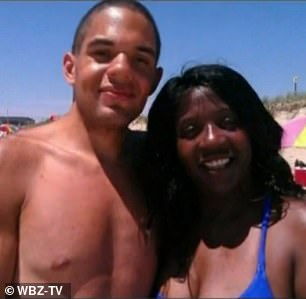 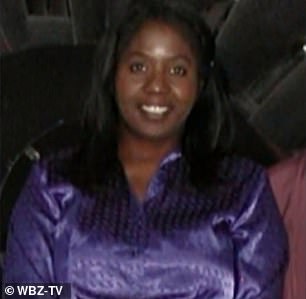 Cooper’s son, Gary Cooper Jr, remembered his mother (left and right) as ‘caring and selfless’ and always ready to help anyone in need. 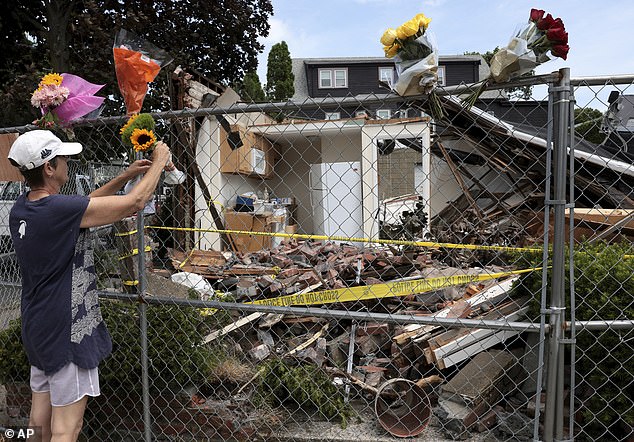 The incident unfolded around 2:45pm Saturday in the city of Winthrop, about six miles outside of Boston, when Allen crashed the stolen box truck into the building.

He walked away from the crash and shot Cooper in the back multiple times and Green in the head, neck and torso, DA Rollins said.

When responding officers got to the scene, a Winthrop police sergeant found Cooper and Green on the ground with gunshot wounds, quickly identified and confronted Allen, and shot him, police said.

Rollins said the police sergeant followed protocol by telling Allen to drop the gun before shooting him and then ‘immediately rendered’ aid.   Allen died shortly afterwards.

‘This Police Sergeant, like Trooper Green and Staff Sergeant Cooper, is a hero,’ Rollins said on Sunday. ‘The Sergeant stopped a volatile and escalating situation, saving lives, and protecting the community he serves.’

The Winthrop police sergeant who shot the gunman was placed on administrative leave, as part of standard protocol.

Rollins said police found the ‘troubling’ racist literature but didn’t say where they were found or go into any other details about them, but said, ‘There is a growing national, and global, problem with extremism and white supremacy.

‘The FBI believes the most serious domestic violent extremist threat comes from “racially or ethnically motivated violent extremists, specifically those who advocated for the superiority of the white race.”‘

Winthrop Police Chief Terence Delehanty told Masslive.com, ‘We have no tolerance for hate in this community.’ 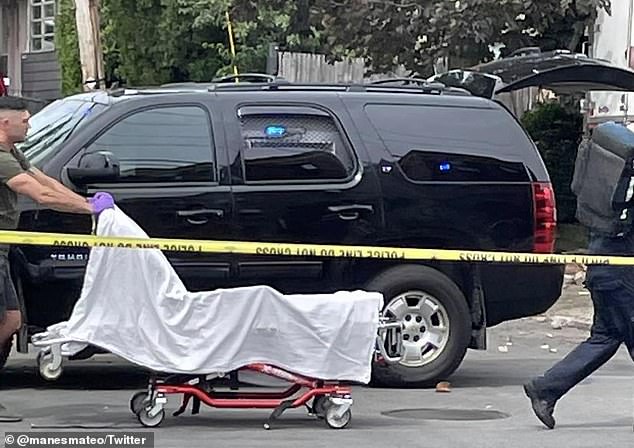 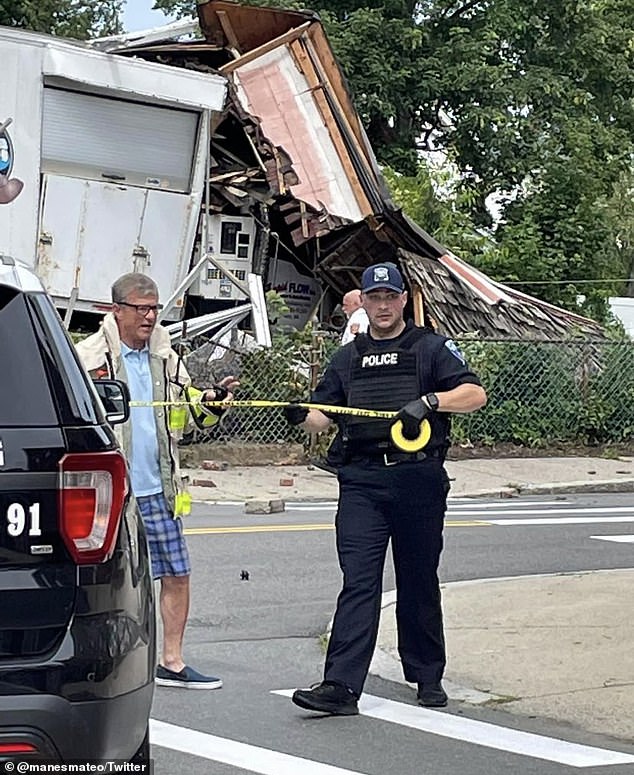 Massachusetts state police told Fox News that Green was the ‘quintessential professional’ and are trying to determine if attempted to confront the suspect.

‘As the investigation continues and resources are extended to the victims’ loved ones and to the Winthrop community, we must say loud and clear that hate has no place in our communities or our nation,’ Rollins tweeted on Sunday.