White woman, 52, is shot dead by police after ‘walking down the street with a gun and a bottle of wine while warning of a race war’ before opening fire on cops

Police bodycam footage shows the shocking moment a white woman was shot dead by officers after she fired at rifle at them during a stand-off in California.

Sandra Lee Harmon, 56, died following her altercation with two members of the San Mateo County Sheriff’s Office on May 5.

On that date, police received a call from a witness saying she saw Harmon carrying a long rifle as she walked down a suburban street of Half Moon Bay, south of San Francisco.

‘There’s a woman walking down the street with a gun and a bottle of wine, warning me that a race war was going to happen,’ 911 audio of the witness phone call states.

Sandra Lee Harmon, 56, died following her altercation with two members of the San Mateo County Sheriff’s Office on May 5. She was earlier captured on a business surveillance camera brazenly brandishing the weapon as she strolled down the street

Harmon was also captured on a business surveillance camera brazenly brandishing the weapon as she strolls down the street.

Deputy David Dominguez, an officer with the Sheriff’s Department, could not locate Harmon in the area, and soon knocked on the door of a nearby motor home in order to interview more witnesses.

However, it was there that he encountered Harmon.

According to a 12-minute ‘critical incident’ video shared to the sheriff’s department website, Dominguez had ‘a brief conversation with Harmon’.

She then ‘exited the motor home and leveled her  shotgun at Deputy Dominguez. He retreated to the cover of his patrol vehicle, [but] as he took cover, Harmon fired the shotgun in his direction’.

Additional text included in the video reads: ‘In the fast moving situation with incoming fire, Dominguez did not activate his body-worn camera. After discharging his service weapon, Harmon dropped the shotgun.’

A second officer, Deputy John Baba, was close by, and his bodycam was switched on.

Footage shows him racing to the motor home and ordering Harmon to the ground. As she attempt to pick up her shotgun, Babe fires at the woman and she drops to the ground. 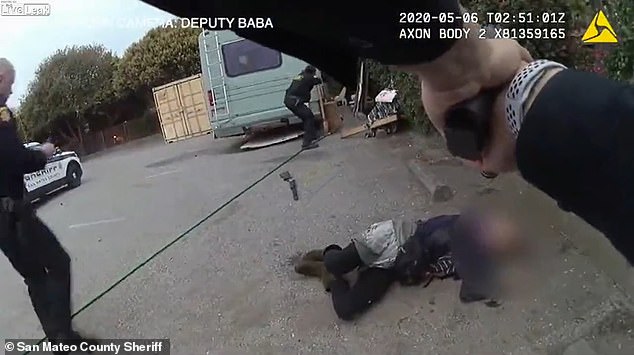 A second officer, Deputy John Baba, was close by, and his bodycam was switched on. Video from the camera shows him firing at Harmon as she attempted to pick up her shotgun

Harmon was rushed to hospital but died from her injuries.

Harmon’s family told the Half Moon Bay Review that she was ‘troubled’ and suffered from ‘mental health issues’.

However, they described her as a ‘peaceful person’.

Both Dominguez and Baba have been placed on administrative leave pending a n investigation by the county’s District Attorney’s Office. 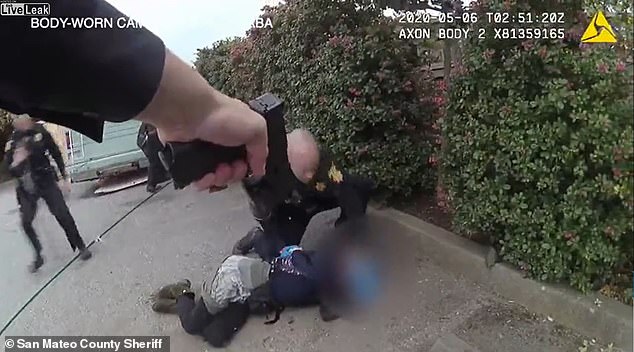 Another officer tended to Harmon after she was shot and injured. She was rushed to hospital but died from her injuries