By Jarret Thomas Sackman For Dailymail.Com

Whitney Port was seen in a skimpy yellow and green bikini in new images shared to her Instagram page this week.

The Hills vet added a straw hat and sunglasses as she was seen by a swimming pool.

In her caption she said she missed her husband Tim Rosenman while on her San Diego getaway. ‘Timmy’s been gone for a week,’ she captioned the series of poolside pictures. ‘Boy, how I miss him.’

Fit and fashionable: Whitney Port was seen in a skimpy yellow and green bikini in new images shared to her Instagram page this week

The Hills alum took her mom and five-year-old son, Sonny, to the Hotel del Coronado in San Diego for some quality bonding time at the luxury resort.

The 37-year-old mother of one looked stellar in her Triangl bikini and a Panama hat from Sensi Studio.

According to Triangl’s website, the Maci Alora scoop crop bikini costs $99 and pairs wonderfully with one of Sensi’s signature straw hats. 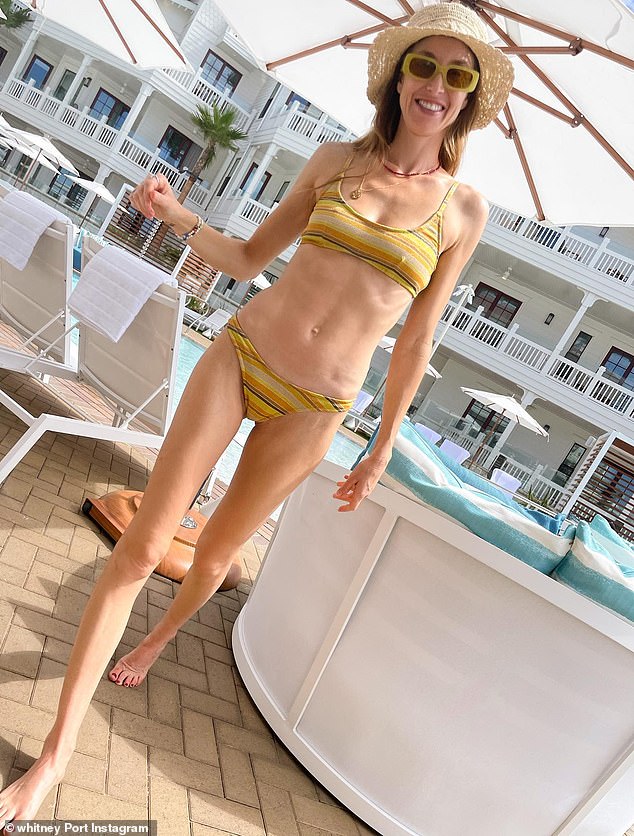 Smiling in San Diego: The Hills vet added a straw hat and sunglasses as she was seen by a swimming pool 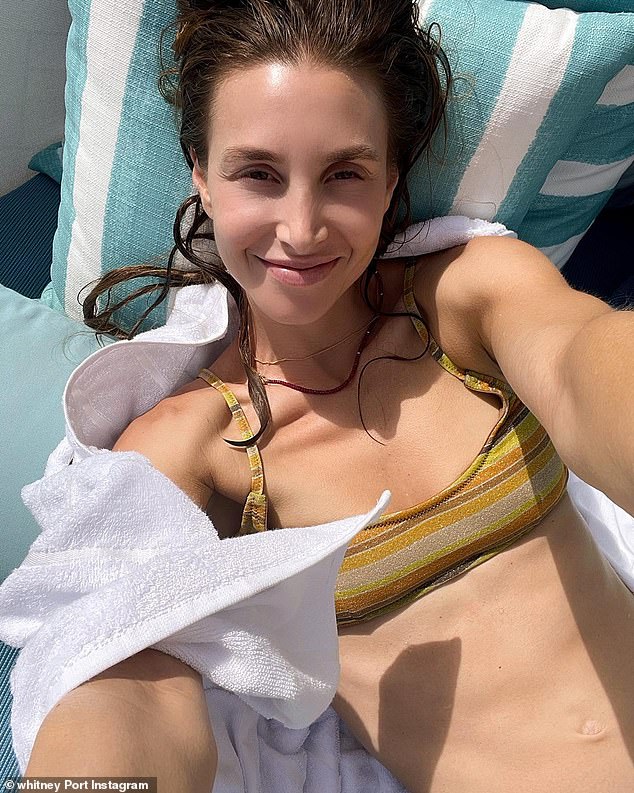 Stunning in stripes: Port got some sun over the weekend with her mother and young son at the Hotel del Coronado

This comes as no surprise since the stylish reality TV star is known for her fashion sense. She has previously held down numerous internships with industry heavyweights such as Diane von Fürstenberg and Teen Vogue.

The With Whit podcaster flaunted her toned and slender physique as she lounged poolside with her and Rosenman’s only son.

Whitney met the television producer while she was filming her spinoff from The Hills, a series which he produced. The City aired from 2008 to 2010 on MTV and the couple married in a lavish Palm Springs wedding in 2015. 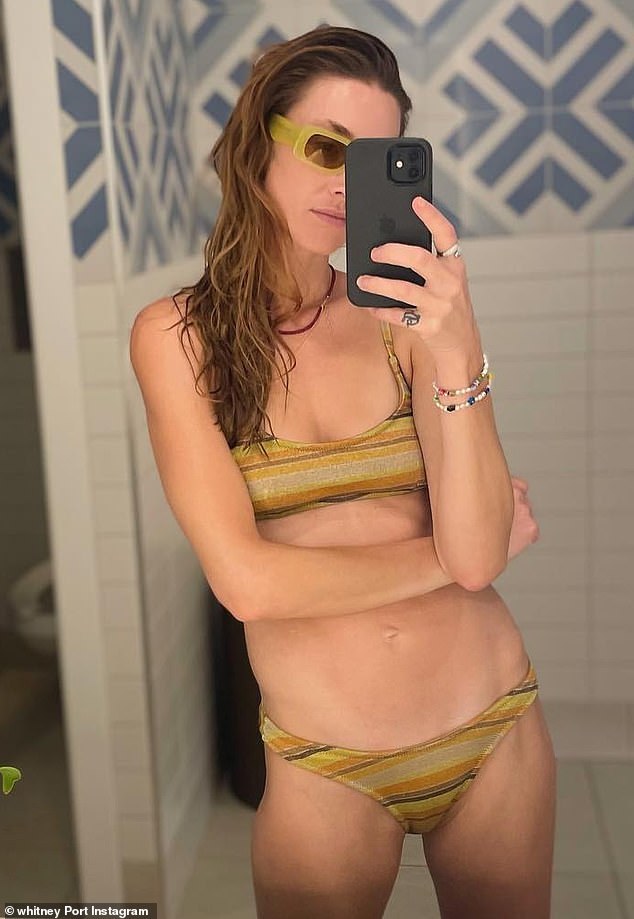 Cool by the pool: The former MTV mainstay displayed her innate confidence and fashion sense as she posed for a selfie in a bathroom mirror

Despite her long absence from reality TV, Whitney and her husband continue to film reaction videos to The Hills and other related shows for their YouTube Channel.

The couple’s channel also features a new series called Renovation Station where they show their 186,000 followers the process of renovating a home into office space for Whitney’s overall brand Whitney Port Inc.

As a paid spokesman for Amazon, the former MTV star has a curated collection of office decor products. 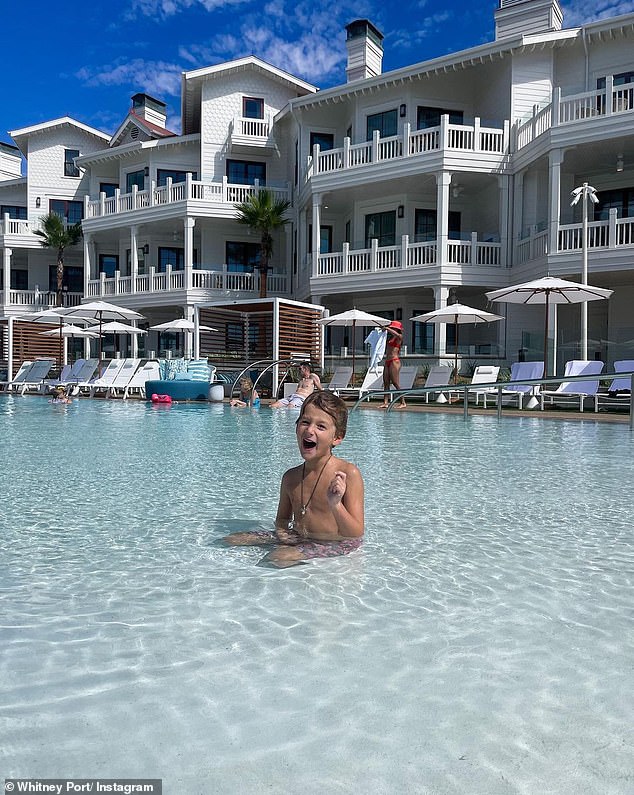 Mother-son fun: Whitney’s five-year-old son seemed to be enjoying the hotel’s gorgeous pool where a premium cabana costs $400 per day

Clearly the star needed some rest and relaxation after balancing family and her various business ventures.

However, the getaway got off to a bit of a rocky start when Port dropped her phone in the ocean within ten minutes of her arrival.

‘Felt freeing but also weird,’ was how she described the mishap before going on to thank her mother for the photos. ‘What’s great though,’ she wrote, ‘is that so many of these are taken by my mom.’

The designer is very close to her mother, Vicki Port, especially after losing her father, Jeffrey Port, in 2013 to a year-long battle with kidney cancer. Port later sat down with Hollywood medium Tyler Henry, who claimed that her late father wanted to communicate that he felt ‘an immediate sense of relief and comfort’ after his passing. 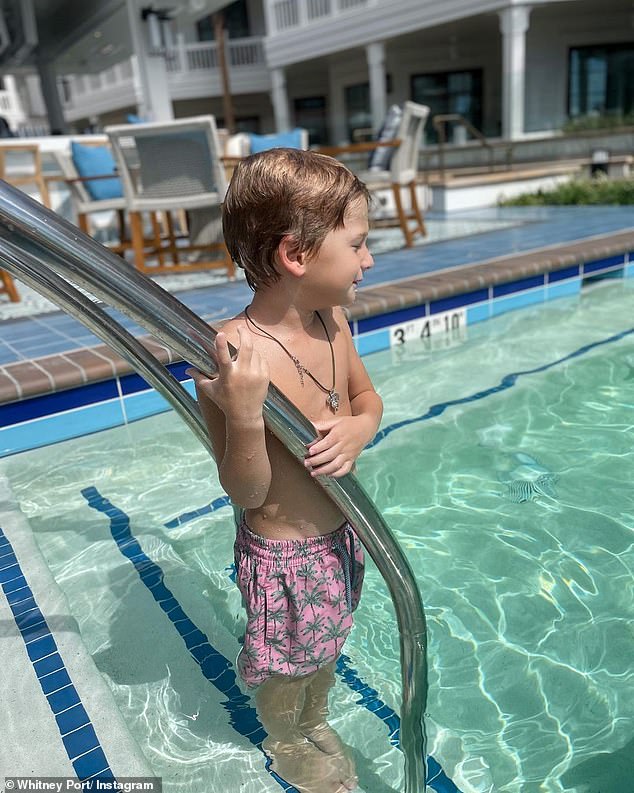