She’s had run-ins with the Spice Girls, dealt with ridiculous requests from Mariah Carey and bows to no one but Madonna.

As a formidable music manager and talent agent of two decades standing, Melanie Blake has witnessed the extreme highs and lows of showbusiness: from the huge egos and the hysteria; to the breakups and the meltdowns.

But while the glamorous impresario, now 40, was cutting a Chanel-suited swathe through record company boardrooms and sordid backstage scenes, few realised that she was taking notes with a view to one day publishing a novel.

As a formidable music manager and talent agent of two decades standing, Melanie Blake has witnessed the extreme highs and lows of showbusiness

Twenty years in the writing, Blake’s debut The Thunder Girls tells the story of a warring all-female group’s fraught reunion.

In the mid-Eighties, the fictional girl band – a cross between the Spice Girls and The Bangles – enjoyed global acclaim and astronomical sales figures.

Then, torn apart by betrayal they split acrimoniously, their dearest wish being to never see each other again.

Addiction, breakdowns, divorce and bankruptcy ensued but now with a reunion on the table and the big money beckoning, should they bite the bullet and get the band back together – can lightning strike again, 30 years later, for The Thunder Girls?

It’s a pacey page-turner with more twists than an advanced Pilates class, but the Girls’ world is vividly painted by an author who has plainly seen it all.

‘The dark side of fame, the disillusionment and despair, is fascinating,’ Blake admits. ‘There’s always a price to pay, it seems.’

The female characters in her book may struggle but the men are often given brutally short shrift. ‘That’s because I’ve never met a nice guy in the rock business,’ shrugs Blake, who embodies the spirit of both Hollywood’s Bette Davis and Coronation Street’s Bet Lynch.

But she is insistent that the novel’s morally suspect record label chief Jack Raven isn’t based on one-time Virgin Records supremo Richard Branson, despite some intriguing similarities.

‘He one million per cent is not,’ she says, aghast, perhaps pre-empting a letter from m’learned friends. The novel’s arrival is timely, as the Spice Girls’ have recently overcome their differences and toured together while Madonna has materialised as Madame X at 60, to re-claim her crown as the Queen Of Pop.

Much like Madonna, Blake has pulled herself up by the bra-straps, her own story almost stranger than fiction.

‘Honestly, if I hadn’t lived my life, I wouldn’t believe it myself,’ she confides in a gentle Manchester accent.

‘Rags to riches is such a cliché but in my case it’s true. It’s been quite a journey.’

Blake is sipping a mid-morning Mimosa – champagne and fresh orange juice in equal measures – at her favourite five-star London hotel, ‘my second home’.

Dressed in a smart, black Gucci frock, with a personalised Dior handbag by her side, she proudly shows off a ring and necklace, inlaid with morganite and diamonds, purchased from the estate of her heroine Jackie Collins, the best-selling author who died in 2015. Her 1988 blockbuster Rock Star changed Blake’s life and, in a way, set the stage for The Thunder Girls.

‘It sowed a seed in me,’ Blake enthuses. ‘It was the photo of Jackie as much as the writing. This powerful, won’t-marry-money, won’t-sh*g-my-way-up-the-ladder woman. Just beautiful and so inspiring.’

Like Collins, Blake’s mantra could well be ‘I’ve got to be successful because I love expensive stuff’.

She grew up ‘dirt poor’ in the North of England, the meagre family funds further depleted when her father, a print worker, joined a religious cult and gave their belongings away. To get by, mum became a part-time cleaner and relied on charity to feed her children.

‘I couldn’t understand why she’d be coming home with tins of pilchards and a bag of jellybeans for our tea,’ says Blake sadly. ‘Now I know she was going to what were early versions of food banks.’ 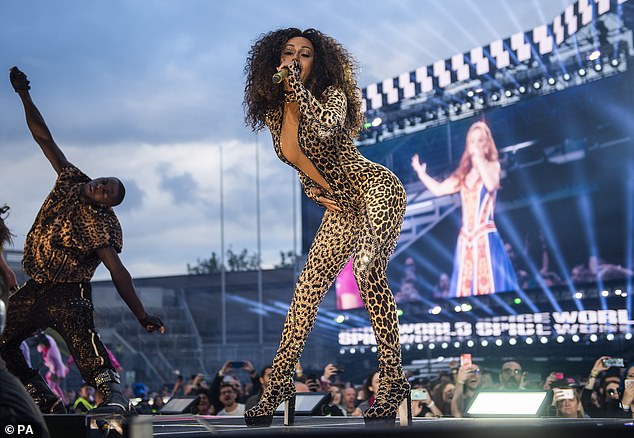 Mel B at the Spice Girls’ recent reunion tour. ‘I thought Mel B was going to punch me once. I was singing along to her rehearsal music in a Bo Selecta style,’ Melanie Blake says

Television was forbidden: ‘I had to sneak next door to watch Dallas and Knots Landing.’ But when her dad became violent, Blake left home aged 16 and lived in freezing squats until she was deemed homeless and awarded council accommodation in Salford. Working several jobs, she saved enough to move to London and pursue her dream of working in music.

The stars aligned in the late Nineties and Blake, then 19, secured the unofficial position of ‘camera assistant’ at Top Of The Pops, then the nation’s favourite music program.

Soon she was rubbing shoulder pads and sharing jokes with All Saints, Destiny’s Child and the Spice Girls. ‘Although, I thought Mel B was going to punch me once. I was singing along to her rehearsal music in a Bo Selecta style,’ she says, referring to the TV show that cruelly parodied Scary Spice. ‘It turned out she was standing right behind me and she said, narrowing her eyes, “Do that again”.’

Blake briefly became Britney Spears’ ‘friend’ when the troubled singer was at an existential loose end, and recollects a visit to a local Hertfordshire pet shop to purchase kittens lest a restless Mariah Carey became agitated.

She was impressed by Bananarama’s Herculean drinking (‘they could put it away’), disappointed by American vocalist Anastasia (‘lovely at first then once she’d had a hit she changed’) and adored Geri Halliwell.

‘But I loved the old Geri Halliwell,’ she declares dramatically. ‘The big boobs, Union Jack dress, Geri from Watford. Not the posh hybrid one we’ve got now.’

Girls aside, Blake also observed the strutting male celebrities of the day at play.

‘Robbie Williams and David Beckham would be having a kickabout with a ball in the corridor, while Victoria was rehearsing with Dane Bowers and True Steppers,’ Blake recalls fondly.

‘David hid between the speakers while Victoria was performing so he could be close to her because she was so nervous. If the fans in the studio knew David was there they would have gone ape.’

Any shady behaviour at Top Of The Pops, Blake maintains, took place in the locked Elstree dressing rooms to which she had scant access. But she clearly recollects a rocker enjoying an espresso encounter with a fan up against the canteen coffee machine.

However, had she witnessed any sexual abuse of minors, Blake insists she would ‘stepped in right away, then I would have called the police.’ She pauses thoughtfully. ‘Or gone to the newspapers.’

Drugs too were kept out of view, but certain artists became noticeably livelier following drop-offs by shifty gentlemen of no fixed profession.

I always found that cocaine made people very humourless and boring, just desperate for their next line

Blake confesses to a fleeting dalliance with an unnamed ‘American rock star in a very well-known band’.

The stars started to invite her to voguish parties and Blake ‘hung out with that Primrose Hill lot’, a North London clique that included Oasis, actor Jude Law, his then-wife Sadie Frost and sundry supermodels.

‘There were parties at Noel Gallagher’s house, Supernova Heights, which was really tacky, where people were shovelling god-knows-what up their noses,’ Blake frowns.

‘I always found that cocaine made people very humourless and boring, just desperate for their next line.

‘The late-nineties was a crazy time, it’s amazing that some of that mob are still alive.’

Graduating from the TOTP studio floor in 2001, Blake went on to specialise in ‘when the screaming stops’ band management, offering guidance to post-fame pop stars hoping for a second-flush career.

She represented former teen idols from Bros and Spandau Ballet and rebooted The Nolans but her main success came with Claire Richards from Steps, who blossomed in her solo incarnation. ‘She was always my favourite Step,’ chuckles Blake of her hard-working charge. She counts off a few of Richards’ many lucrative activities – singing, cooking, slimming – on pale pink fingernails.

But Blake, who also wrote for a time as a TV critic, now relishes moonlighting as a novelist, succumbing to her wilder flights of fancy, allowing the characters ‘to do their own thing and surprise even me.’

She apologises for the lack of explicit sex in The Thunder Girls but promises that her second book, about the seedy underside of TV, will be ‘absolutely filthy’, citing Shirley Conran’s proto-bonkbuster Lace as a touchstone.

Blake’s personal life hasn’t yet notched up as many marriages as Jackie Collins or even Madonna.

She was engaged once but remains unmarried and has no children of her own.

Her multi-faceted career keeps her ‘beyond busy’ and a ‘chronic designer handbag habit’ demands that the cash register rings regularly. ‘Making money is important, of course,’ she smiles, as a waiter discretely tops up her mimosa. ‘But being a girl who came from nothing and achieved a dream is much more satisfying.

‘Having your book published is a better feeling than anything you can buy.’

And if The Thunder Girls is the surprise smash of the summer, it could open up a whole new chapter.

The Thunder Girls by Melanie Blake, £7.99 is out on 11th July, published by Pan Macmillan available to buy online here