Who Gives a Crap: Founder of toilet roll empire selling 28 rolls a SECOND reveals how he did it

The founder of an Australian subscription toilet roll company says the panic buying frenzy that gripped the globe as cities shut down because of Covid saw his fortunes change forever.

Simon Griffiths, 38, from Melbourne, had the idea for the online toilet roll service Who Gives A Crap in 2009.

But it took a crowd-funding campaign in 2012 to get it off the ground and the global Covid pandemic of 2020 to send sales into the stratosphere.

Simon, whose empire now sells 28 rolls per second, has revealed how he grew his business by 1000 per cent in 2020 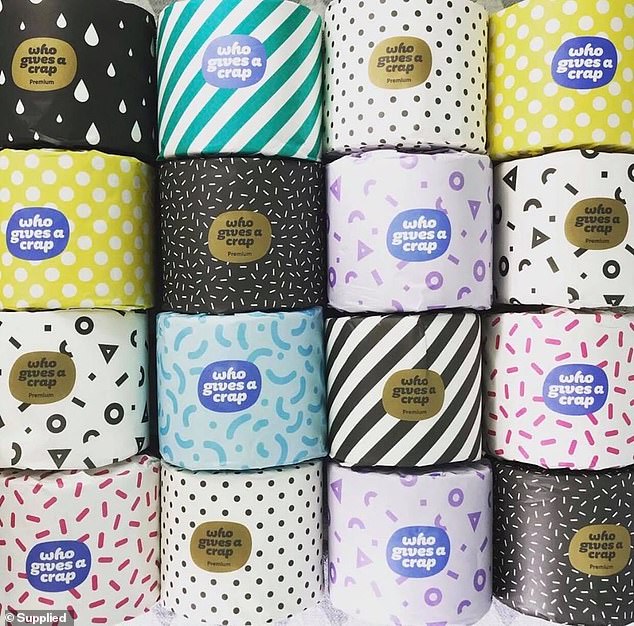 The brand’s rolls (pictured) are made from super-soft, 100 per cent recycled toilet paper, with an impressive 50 per cent of profits going towards building toilets in the developing world

Who Gives A Crap isn’t like any regular toilet roll business.

The brand’s rolls are made from super-soft, 100 per cent recycled toilet paper, with an impressive 50 per cent of profits going towards building toilets in the developing world. 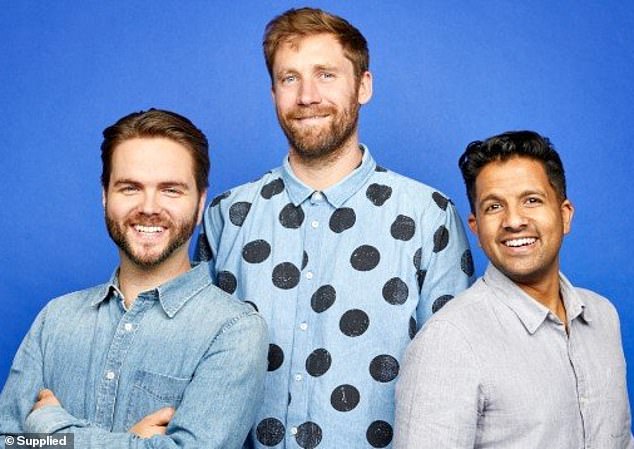 Simon (pictured with his co-founders) went from strength to strength with the business in 2020, when sales doubled before going 12 times more and even 40 times more in March 2020

While Simon and his co-founders Danny Alexander and Jehan Ratnatunga had some business experience before launching ‘Who Gives A Crap’, nothing could have prepared them for their unique crowd-funding experience.

Simon said they spent $50,000 on 50,000 rolls and knew they needed customers to take the toilet rolls off their hands while they didn’t have a warehouse.

So Simon agreed to sit on a toilet until they sold the first 50,000 rolls in order to boost sales.

‘The idea in theory was great, but it turned out there were people buying the toilet paper from all over the world, Brazil, Greece, Australia,’ Simon said.

‘So I had to stay awake for 50 hours until they were all sold. I was in a state of delirium by the end of it.’ 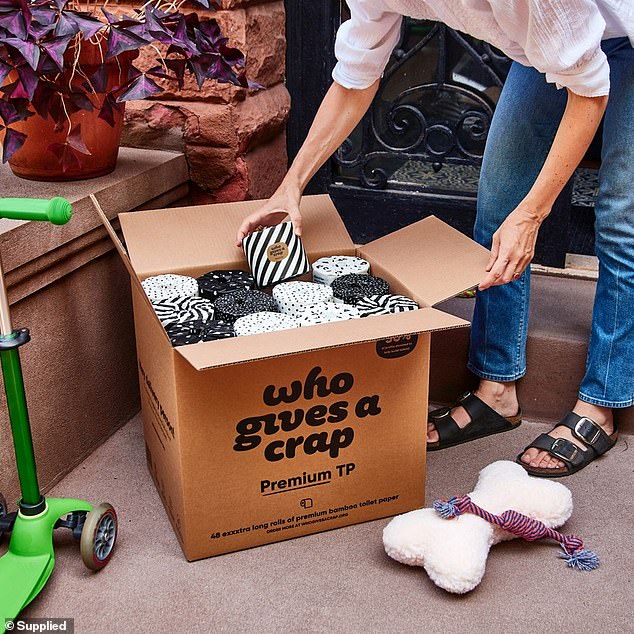 What sets Who Gives A Crap apart from other toilet roll businesses?

* Who Gives A Crap donates 50 per cent of their profits to help build toilets in the developing world. 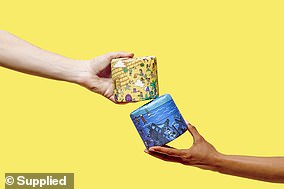 * The company has been able to donate $8.3 million to help provide proper sanitation for the two billion people in need.

* The brand’s rolls are made from super-soft, 100 per cent recycled toilet paper.

* Who Gives A Crap allows you to do a big bulk order of ‘extra-long rolls’ so you run out of toilet paper less frequently.

* As you near the end of a box, you will reach an ’emergency roll’, which has been designed to help prompt you to stock up or re-order.

* The rolls don’t use any inks, dyes or scents, meaning they are good for your bum.

* They are B Corp™ certified for the highest standards of social and environmental impact.

Source: Who Gives A Crap

Following the launch, it wasn’t long before the idea of Who Gives A Crap took off around the world.

‘Customers love the fact that we think about everything when it comes to toilet paper, including selling extra-long rolls and labelling the rolls at the end of the a multi-pack “emergency rolls” so you know it’s nearly time to stock up,’ Simon said.

The most environmentally-friendly product Who Gives A Crap sells is the recycled toilet paper.

‘Some 27,000 trees are cut down globally every day and 10 per cent of those trees that have been cut down go to toilet paper,’ Simon said.

‘When you buy Who Gives A Crap, you’re not taking trees out of the ground and then just flushing paper down the toilet.’ 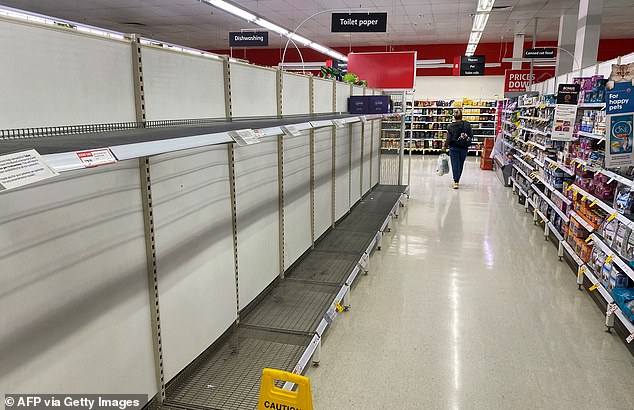 ‘The reaction to the pandemic and everyone rushing to stockpile toilet paper was actually quite natural,’ Simon said (empty toilet roll shelves pictured in Melbourne 2020)

With the onset of the global pandemic and people rushing to stockpile toilet paper, Who Gives A Crap has only gone from strength to strength.

Last year, the business peaked at selling 28 rolls per second and recorded a 1000 per cent year-on-year growth.

‘The reaction to the pandemic and everyone rushing to stockpile toilet paper was actually quite natural,’ Simon said.

‘Everyone realised they were going to be at home more, and supermarkets can’t stock all that much toilet paper because it is bulky and doesn’t bring in much money so they could do with saving the shelf space for something else.’

The entrepreneur added that the rational response when something is scarce is to buy more.

‘It took a few months for the manufacturers to re-centre and catch up,’ he said.

‘It was wild for a bit. We were doing more than a month of sales in one day,’ he said.

‘But we’ve learned how to deal with it now, and we just re-direct stock to different states, depending on lockdowns.’ 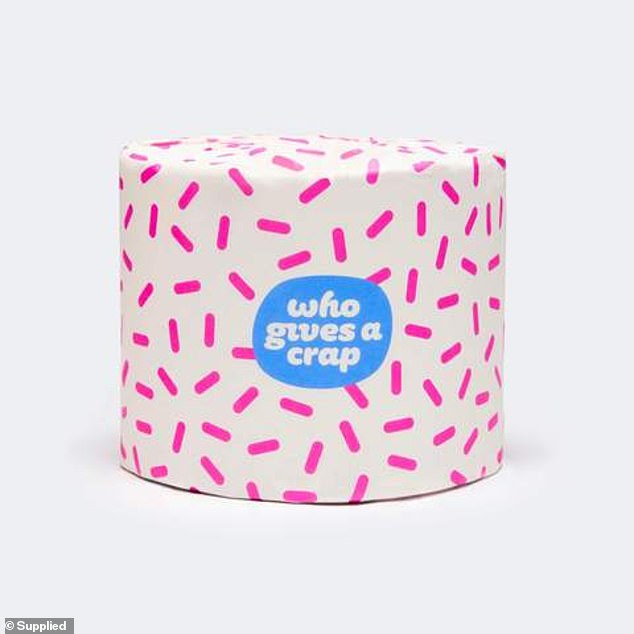 The Who Gives A Crap customer, for Simon, is someone with a ‘certain set of ethics’, as people want to know where what they’re buying has come from (rolls pictured)

The Who Gives A Crap customer, for Simon, is someone with a ‘certain set of ethics’.

‘Profits and purpose have become inextricably linked in the modern world, and we’ve figured out that doing good ends up with good business,’ he said.

Who Gives A Crap has extended into selling things like paper towels, tissues and cloths, with more ranges planned over the next year.

‘I think our purpose resonates with people, who now realise that every dollar they spend is a vote for the future,’ Simon said.

‘People are digging more deeply than ever to find out how things are made, about the money they’re spending and where their cash is going.’