Who is Anjem Choudary and why was he in prison?

Notorious hate preacher Anjem Choudary has been released from prison on Friday, October 19, after serving only half of his five-and-a-half-year sentence.

The radical cleric, branded the most dangerous man in Britain, has reportedly been associated with more than 100 terrorists through his extremist Al-Muhajiroun (ALM) network, including Michael Adebolajo and Michael Adebowale, who hacked Fusilier Lee Rigby to death in Woolwich in 2013.

‘I would describe him as a hardened terrorist, somebody who has had huge influence on the Islamist extremist scene in this country over many years,’ says Richard Walton, a former head of Scotland Yard’s counter-terrorism command.

‘I believe we are under-estimating the potency and danger of the radicalisers who don’t carry knives, guns and overtly plot terrorist attacks but who pollute the minds of young Muslim men.’

With Choudary now out of prison, here is all you need to know about him, including who he is, why he was in prison, why he was released and what happens to him now.

Who is Anjem Choudary?

Born in London in 1967, Anjem Choudary grew up in the capital and went to school in Woolwich. He initially studied medicine at the University of Southampton but ended up failing his first-year exams.

He switched to law instead and became known on the course as Andy, a ‘party animal’ who drank alcohol, smoked cannabis and read adult magazines.

Failure to land a job at a law firm was reportedly the starting point of Choudary’s extremism. He connected with Islamist preacher Omar Bakri Muhammad and together they founded ALM.

The network was proscribed in 2010 and counted the Lee Rigby murderers and London Bridge attacker Khuram Butt among its followers.

Westminster attacker Khalid Masood was also linked to Choudary through Ibrahim Anderson, an al-Muhajiroun activist convicted of inviting support for ISIS in 2016.

His wife, Rubana Akhtar, whom Choudary married in 1996, is thought to be just as extreme as her husband, having been filmed in 2016 talking favourably about ISIS. 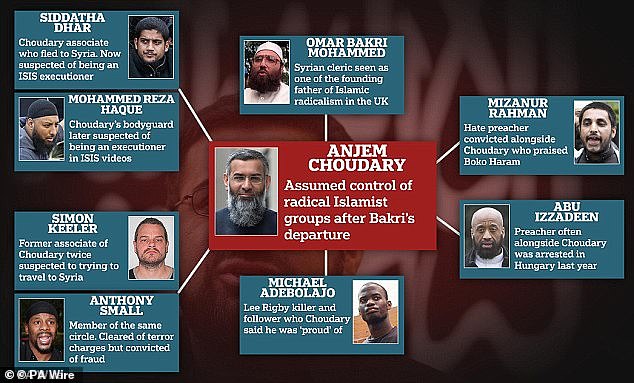 Why was Choudary in prison?

In 2014, he and his followers met at a curry house in east London and formally pledged allegiance to the ISIS caliphate.

While not naming the terrorist network, Choudary then sent a series of tweets encouraging Muslims to join an unspecified ‘caliphate’. The oath was then posted on an Indonesian website by convicted terrorist Mohammed Fachry, giving the police enough evidence to make an arrest.

The judge who convicted Choudary, Mr Justice Holroyde warned that the cleric would pose a danger in jail and on his release.

He told him at the Old Bailey: ‘You show no remorse at all for anything you have said or done and I have no doubt you will continue to communicate your message whenever you can’.

Why was he released?

Choudary was released after only serving half of his prison term because current legislation allows prisoners to serve the second part of their sentence ‘on licence’.

Fiyaz Mughal, head of anti-extremist group Faith Matters, who was brought in to speak to Choudary to try and de-radicalise him said the law should be changed.

‘He should have served the full term. It’s a terrible day for victims of the attacks he has helped incite.

‘We need a change in the law so that anyone named as the inciter in two terrorist attacks should automatically serve the full sentence.’

He also said that Choudary actually got worse in prison, more radicalised.

‘Choudary was put in containment that stops him engaging with other prisoners, but also given pastoral care to see if they could get through to him,’ he said.

‘I asked the guy who spoke to him if the de-radicalisation programme had worked and he said, ‘No, he’s got worse. He’s hardened’. He speaks in the mindset of the victim. He sees himself as a martyr the state tried to silence.’

On Friday October 19, at 4am, Choudary was released from Belmarsh Prison in south-east London and taken to his bail hostel.

He is out on licence and will have to stay there for six months. His hostel is located between a primary school and offices, something the locals are furious about.

One neighbour told MailOnline: ‘I think it is disgusting that he is here and freed so early given what he is responsible for. It is repugnant to think that this man who inspired terrorists is now living here’. The cleric’s family lives ten miles away.

A local trader, who asked not to be named, said: ‘It is sickening knowing he is so close.

They should find another place for him away from the community. Everyone has heard of him. If he hates this country so much he should be deported.’

Choudary will face 25 licence conditions. He is allowed a TV in his room and a mobile phone, which he must hand over to the authorities on request, but he will not have access to a computer.

He will be subject to electronic tagging; a night-time curfew; a ban on travelling outside the M25; a ban on speaking to the media; a ban on preaching; no unsupervised contact with children, among other restrictions.

It is estimated that the taxpayer cost of the security surrounding Choudary will top £2 million a year; it cost £50,000 to keep him in prison.