Who is Janelle Monae? ‘Pansexual’ singer and actor revealed after Rolling Stone interview

Janelle Monae recently revealed she identifies as pansexual in an interview with Rolling Stone, after speculation about her sexuality and years of avoiding questions about her love life.

The interview confirmed rumours that she had alluded to in a song from her new album Dirty Computer, when she stated she was a ‘queer black woman in America’.

Janelle went on to say that as ‘someone who has been in relationships with both men and women – I consider myself to be a free-a** motherf*****’, first having identified as bisexual.

The PYNK singer clarified that after she had read about pansexuality, she found aspects that she identified with and was ‘open to learning more about who I am’. But who is Janelle Monae?

Who is Janelle Monae?

Born Janelle Monae Robinson on December 1, 1985 in Kansas City, Kansas, her parents separated when she was less than a year old and her mother later married the father of her little sister, Kimmy.

Raised in a community called Quindaro, previously a refuge for black Americans escaping via the Underground Railroad, her family were very religious and the singer’s great-grandmother is still a monitor at the local vacation Bible school.

Janelle referenced her devout Baptist family when speaking with Rolling Stone and said: ‘I literally do not have time to hold a town-hall meeting with my big-ass family and be like, “Hey, news flash!” There are people in my life that love me and have questions, and I guess when I get there, I’ll have to answer those questions.’

Singing came naturally to Janelle and she is known to have been escorted out of church for singing Michael Jackson’s Beat It, covering The Miseducation of Lauryn Hill three years in a row and was the star of her school musicals.

After passing an audition for the American Musical and Dramatic Academy, Janelle moved to New York and studied musical theatre before relocating to Atlanta. One of Janelle’s first songs Lettin’ Go was inspired by the time she was fired after responding to a fan on a work computer.

Rapper Big Boi heard Lettin’ Go and put Janelle in touch with Sean Combs, otherwise known as Puff Daddy, who loved her music immediately. She was signed to Bad Boy Records in 2006 and the next year she released her first solo work Metropolis, first conceived as a concept album in four parts.

After the release of Metropolis: Suite I (The Chase), she earned a Grammy nomination for her single Many Moons and went on to tour with No Doubt in 2009. Janelle’s single was also featured on American Idol in the same year.

This is when her alter ego Cindi Mayweather came about and in an interview with MTV, Janelle said: ‘Cindi is an android and I love speaking about the android because they are the new “other”. 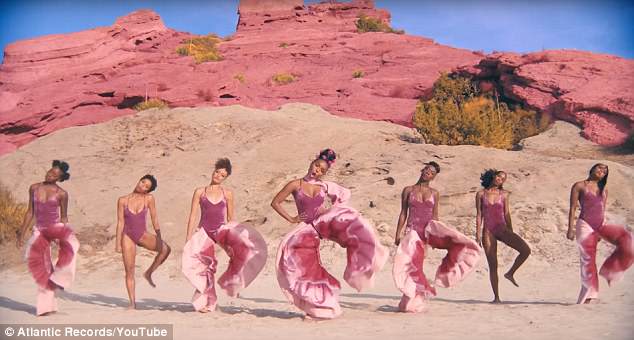 PYNK singer clarified that after she had read about pansexuality, Janelle Monae found aspects that she identified with as well as bisexuality and was ‘open to learning more about who I am’

‘People are afraid of the other and I believe we’re going to live in a world with androids because of technology and the way it advances. The first album she was running because she had fallen in love with a human and she was being disassembled for that.’

Her debut album The ArchAndroid came out in May 2010 and the second and third parts of Metropolis were combined into this release. After garnering success, she was chosen as CoverGirl’s spokeswoman and performed at the 2012 Democratic National Convention, supporting Barack Obama.

She released Q.U.E.E.N. featuring Erykah Badu and said that the song was for those who were marginalised, the name being an acronym and standing for queer, untouchables, emigrants, excommunicated and negroid.

In 2015, Janelle Monae signed a venture partnership with the independent label, Wondaland Arts Society and what is now known as Wondaland Records released a compilation EP called The Eephus. Her single from this release was called Yoga. 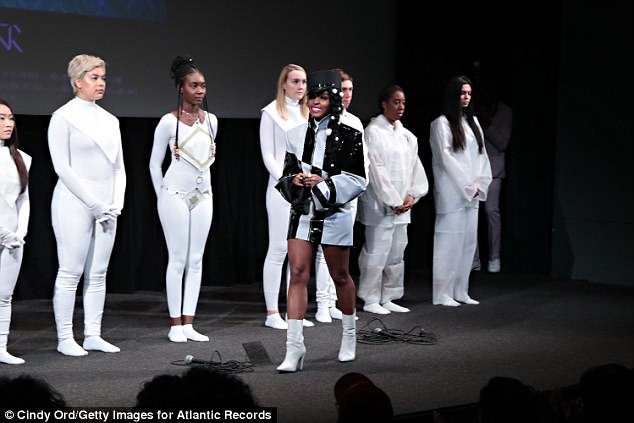 Janelle made her breakthrough film debut in Oscar-winning Moonlight and in the same year, also starred in the acclaimed Hidden Figures.

In the interview, Janelle discusses the role of black American tales in Hollywood, saying ‘our stories are being erased, basically’. After her appearances in Moonlight and Hidden Figures, she felt attached to those stories and they made her ‘want to tell my story’.

On Hidden Figures, Janelle also said: ‘When I did Hidden Figures, there were some Republican white men tweeting about it and how they just felt bad. You could feel through their tweets that they were just like, “These black women did help us get to space. How could we treat them like that?”’

Janelle also discussed her fear on the election night for the 2016 US Election and how the next day, she could be living in a world where her existence was threatened.

After Trump’s election, she became more of a committed activist, having set up Fem the Future, performing at the 2017 Women’s March and speaking about the Time’s Up movement while introducing Kesha at the Grammy Awards.

Dirty Computer, Janelle Monae’s third studio album, is being perceived as an unfiltered declaration of insecurity and sexual liberation, encouraging others to speak out and have the courage to be themselves.

The album was announced in February 2018 through a teaser video on YouTube and accompanied by a narrative film project, an emotion picture. The teaser video was aired nationwide in select cinemas before screenings of Black Panther and the full album is expected to be released on Friday, April 27, 2018.

‘I want young girls, young boys, nonbinary, gay, straight, queer people who are having a hard time dealing with their sexuality, dealing with feeling ostracized or bullied for just being their unique selves, to know that I see you. This album is for you. Be proud,’ she said.

Alluding to her sexuality, she also mentioned in the interview that the album ‘is a reaction to the sting of what it means to hear people in my family say, “All gay people are going to hell”.’

I Got the Juice [ft. Pharrell Williams] 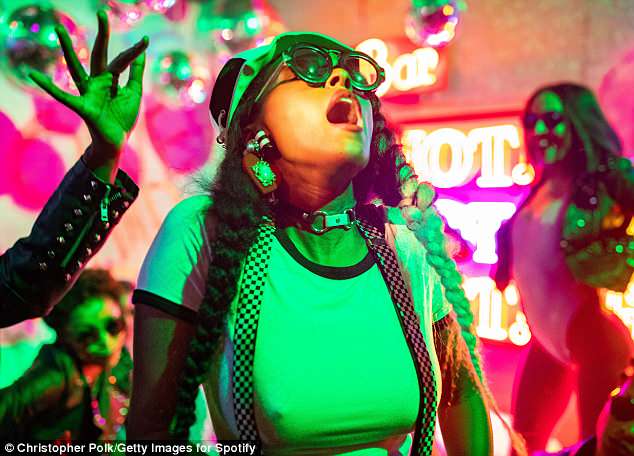 Janelle Monae had the opportunity to be close to one of her biggest inspirations: Prince, who is said to have approved of her new album Dirty Computer, according to Chuck Lightning.

‘When Prince heard this particular direction, he was like, “That’s what y’all need to be doing.” He picked out that sound as what was resonating with him. The most powerful thing he could do was give us the brushes to paint with,’ Lightning continued.

Janelle also cleared up rumours that Prince had written her hit single Make Me Feel and said: ‘Prince did not write that song. It was very difficult writing this album without him.

‘As we were writing songs, I was like, “What would Prince think?” And I could not call him. It’s a difficult thing to lose your mentor in the middle of a journey they had been a part of.’

Prince was the first person to receive a copy of her debut album, The ArchAndroid and she gave it to him with a flower and handwritten titles.

In the interview with Rolling Stone, Janelle Monae confirmed rumours that she was pansexual and stated that she was a ‘queer black woman in America’.

With her android persona of Cindi Mayweather, she provided her fans with someone who fell in love with a human but in reality, she found it difficult to commit to the storyline and keep up with what the entertainment industry asked of her.

Janelle said: ‘It had to do with the fear of being judged. All I saw was that I was supposed to look a certain way coming into this industry, and I felt like I [didn’t] look like a stereotypical black female artist.’ 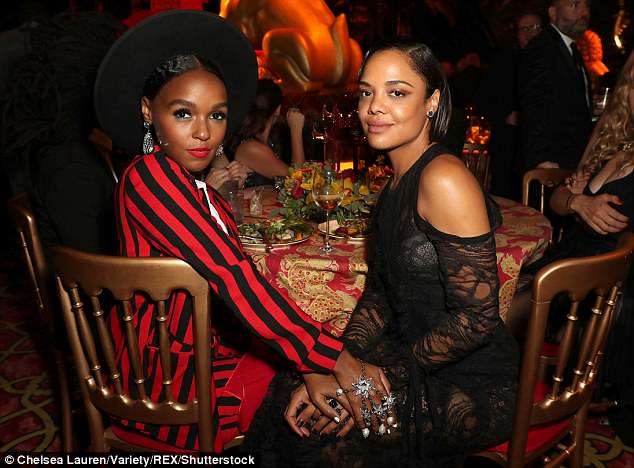 As a perfectionist, she occasionally felt like she had a ‘computer virus’ that needed cleaning and led her to attend therapy sessions before the release of The ArchAndroid.

‘I felt misunderstood I was like, “Before I self-destruct, before I become a confused person in front of the world, let me seek some help.” I was afraid for anybody to see me not at the top of my game. That obsession was too much for me,’ she said.

Throughout her career, she avoided the sexuality questions with the answer: ‘I only date androids’, but in the interview, she said that the real story could always be found in her music.

Janelle referred to her songs Mushrooms & Roses and Q.U.E.E.N. and said that both depict the character of Mary as an object of affection.

Alongside this, in the 45 minute film that accompanies Dirty Computer, Mary Apple is a name given to one of the captives, played by Tessa Thompson, rumoured to be Janelle’s girlfriend.

Whose making music, videos, and overall concepts this cohesive and brilliant with great generation defining R&B and Pop music to go along with it.

I DARE y’all to keep sleeping on Janelle Monáe in 2018. the legend JUMPED OUT!!!! #DirtyComputer

It was on this day that @JanelleMonae changed me and made me better and more whole and more proud and I know that this will be an album and a phenomenon that I will think about years from now. Thank you to u & @TessaThompson_x who give me hope. What a work of art. #DirtyComputer

Americans has me shook. @JanelleMonae closed the LP with a gospel pop rave-up. The chorus somehow can be read as a critique of nationalist extremism, or a funk declaration of patriotic resistance. #DIRTYCOMPUTER IS AN AMERICAN ALBUM!!! ����✊��✊��✊��✊������

While Janelle Monae and Tessa Thompson have been associated for years, a relationship between the pair has never been confirmed. The duo were first seen together after Tessa had a cameo in Janelle’s music video for Yoga back in April 2015.

They were then photographed together at the 2015 MOCA gala and when Janelle was awarded with an equality award for her work advocating the LGBT community, Tessa presented her with this accolade in New York City.

At the end of 2015, Janelle and Tessa took a trip to Mexico together and after a year of no public appearances together, they reunited at Alfred Woodard’s ‘Sistah’s Soiree’ in 2017, the Equality California Awards and at HBO’s Emmys after-party.

Janelle and Tessa attended Issa Rae’s house party in October 2017 and the duo were seen together on multiple red carpet premieres including those for Black Panther and Annihilation. After a few Instagram Live sessions, Tessa played Janelle’s love interest in the film that accompanies Dirty Computer.