Who is REALLY the most popular Glastonbury headliner?

YouTube has exclusively revealed to MailOnline the most watched music icons and breakout artists appearing at this year’s Glastonbury festival.

The data, based on anonymous viewing figures recorded over the past 12 months, sheds light on the cities where the festival’s top acts are most popular in terms of views on the streaming site.

Experts from the Google owned firm have also broken down the top viewed act from this year’s three Pyramid stage headliners.

Glastonbury 2019 is set to take place at Worthy Farm in Somerset, South West England, between June 26 and June 30, with revellers already starting to make their way to the world-famous site.

YouTube has revealed the most watched music icons and breakout artists appearing at this year’s Glastonbury festival. The data, based on anonymous viewing figures recorded over the past 12 months, sheds light on the cities where the festival’s top acts are most popular (map, main) and the top viewed act (pie chart, right) from this year’s three Pyramid stage headliners

WHO ARE THE TOP 20 BANDS APPEARING AT GLASTONBURY 2019 BY YOUTUBE VIEWS?

15. Bring Me the Horizon

YouTube has more than two billion logged-in users every month and an incredible 500 hours of video uploaded to the platform every minute.

That makes for a wealth of insights and trends to explore, showing how YouTube is impacting and reflecting culture and interests in the UK and around the world.

The YouTube Culture & Trends team delves into exactly this area: examining and telling cultural stories about what’s capturing people’s attention, and understanding the unique and wonderful world of YouTube.

Details revealed by YouTube show that Grime star Stormzy, who is making his headline debut at the world renowned music extravaganza this year on Friday, has received the most watches on YouTube in the UK over the past year, with a 57 per cent share of the top three bills.

Saturday night supremos The Killers are in second place with 30 per cent while goth-rock innovators The Cure came in third place with 13 per cent.

The map in our graphic above shows city with the highest relative share of views for each artist that’s taking top billing across the biggest stages at Glastonbury.

It reveals that The Cure are most popular in Brighton; Stormzy is at the top of his game in Leicester; George Ezra is loved in Carlisle; Liam Gallagher goes down a storm in Glasgow; Janet Jackson is a big hit in London; The Killers are killing it in Stirling; Kylie Minogue is a smash hit in Swansea; Lauryn Hill is preaching to the choir in Salford; Miley Cyrus is in Newry and Vampire Weekend is rocking it in Oxford.

Speaking about the results Nicolas Szmidt, YouTube’s international trends lead, said: ‘Glastonbury is such an iconic moment for music fans and a true celebration of UK artists and talent.

‘To explore which artists performing at Glastonbury this year are most watched by Brits, we pulled insights on the most viewed 20 artists headlining and performing at the festival over the last year in the UK.

‘From there, we looked across cities and regions to understand which artists are popular in which places, giving a unique insight into Brits’ tastes, music preferences and excitement ahead of Glastonbury.’

WHO’S APPEARING ON THIS YEAR’S PYRAMID STAGE AT GLASTONBURY? 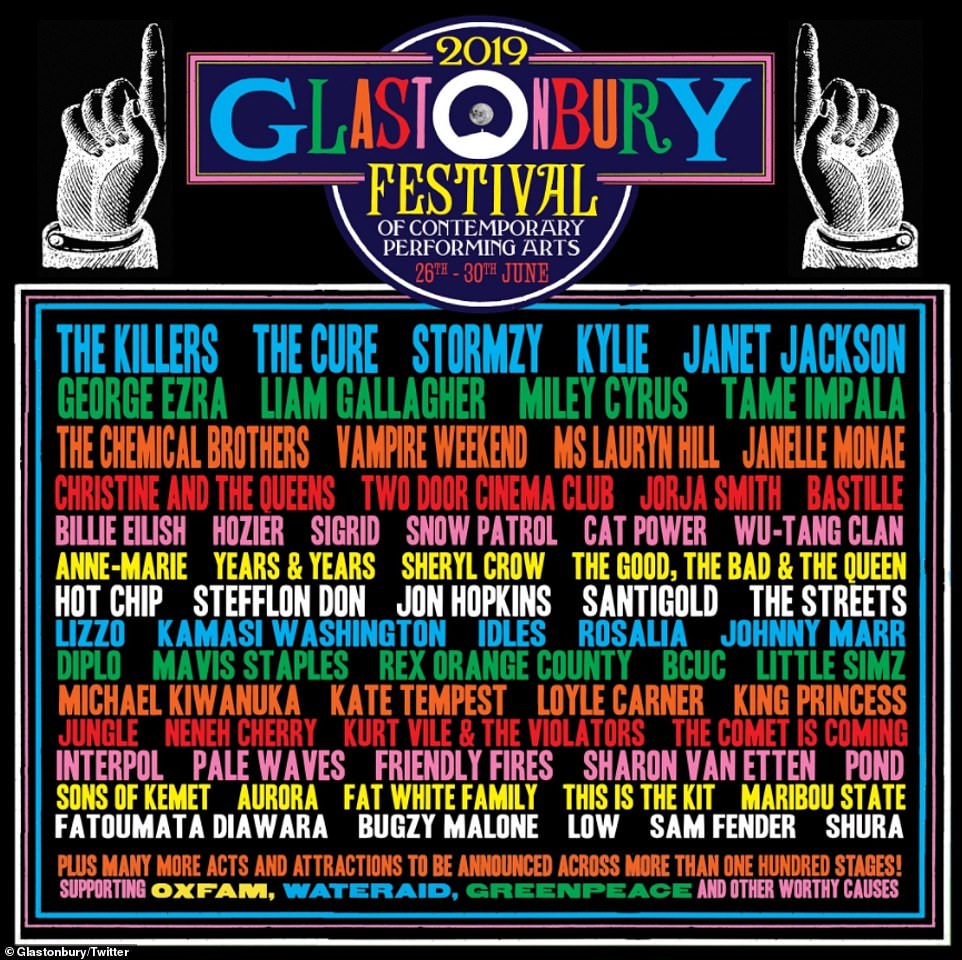 EE announced earlier this year it would test its 5G mobile network during Glastonbury as part of its trials of the technology.

EE has said it will install five temporary masts across the Worthy Farm site, which will enable festival-goers to connect to 2G, 3G, 4G and new 5G networks.

Pete Jeavons, EE and BT’s marketing and communications director, said at the time: ‘Smartphones have become a festival must-have as we’ve seen each year with more and more data being consumed at Glastonbury Festival.

‘As the long-standing technology partner to this iconic event, we are committed to building a network powerful enough to cope with this huge demand.

‘With the introduction of 5G this year, we are able to trial this new technology at Worthy Farm and make history as the UK’s first 5G-connected festival.’

The mobile network has also launched the official Glastonbury app for 2019, which will give attendees the latest updates and news.

It can also be used to create personalised line-ups using an interactive scheduling tool, as well as connect to BBC iPlayer to enjoy sets from top performers.