Who was Johann Carl Friedrich Gauß? Google Doodle celebrates ‘The Prince of Mathematics’

Johann Carl Friedrich Gauß, one of the most celebrated mathematicians in history, has been honoured in a Google Doodle on what would have been his 241st birthday.

Also known as ‘The Prince of Mathematics’, Johann was a child prodigy and went on to make major contributions to mathematics, geophysics and mechanics.

He was also involved in proving the prime number theorem, discovering the heptadecagon and the quadratic reciprocity law. But who was Johann Carl Friedrich Gauß?

Johann Carl Friedrich Gauß, a celebrated mathematician has been honoured by Google Doodle

Johann Carl Friedrich Gauß was born on April 30, 1777 in Brunswick, what is now part of Lower Saxony in Germany to an illiterate mother.

His mother never recorded his date of birth and one of his first discoveries as a child was working out the day he was born after being told it was on a Wednesday eight days before the Feast of the Ascension.

The child prodigy could add up all the numbers from one to 100 from the age of eight and started to make his first mathematical discoveries as a teenager.

Johann completed his magnum opus, Disquisitiones Arithmeticae, at the age of 21 but it was not published until 1801.

His talent caught the attention of the Duke of Brunswick, who sent Johann to the Collegium Carolinum, now referred to as the Braunschweig University of Technology and then the University of Gottingen.

While at university, he found that a regular polygon can be constructed by ‘compass and straightedge construction’, a problem that had puzzled the Ancient Greeks in 1796.

Proud of this discovery, Johann requested a heptadecagon to be inscribed on his tombstone, but the stonemason refused as the shape was too difficult to carve.

In the same year, he also simplified number theory and proved the quadratic reciprocity law, which helps mathematicians determine the solvability of any quadratic equation.

As well as this, also in 1796, he came up with the prime number theorem and found that every positive integer can be represented as a sum of at most three triangular numbers.

Also known as ‘The Prince of Mathematics’, Johann Carl Friedrich Gauß was a child prodigy and went on to make major contributions to mathematics, geophysics and mechanics

In 1801, in addition to publishing his book and as a result, gaining widespread fame, Johann calculated the orbit of the asteroid Ceres.

After this, in collaboration with Wilhelm Weber, he discovered magnetism and they constructed the first electromechanical telegraph in 1833.

In his old age, Johann remained active, publishing the renowned Dioptrische Untersuchugen and becoming a member of the Royal Institute of the Netherlands.

Johann married Johanna Osthoff in October 9, 1805 and the couple had two sons and a daughter. Johanna died on October 11, 1809 and their son, Louis, died the following year.

The mathematician later married Minna Walbeck on August 7, 1810 and had three more children. Minna passed away on September 12, 1831.

One striking anecdote, possibly apocryphal, tells how Gauß was working out a maths problem when he was told his wife was dying.

He is reported to have said: ‘Tell her to wait a moment till I’m done.’

Johann died of a heart attack in Gottingen on February 23, 1855 and he is interred at the Albani Cemetery. His brain was preserved and studied by Rudolf Wagner, who found that its mass was above average.

The Google Doodle for April 30, 2018 celebrates Johann Carl Friedrich Gauß on what would have been his 241st birthday.

The artwork illustrated by Bene Rohlmann shows Johann alongside his much loved heptadecagon. 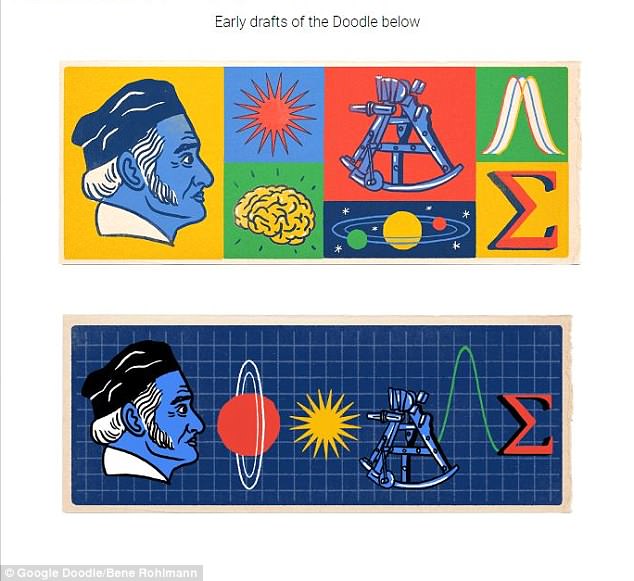 Googe Doodles mark events with creative illustrations on the search engine’s homepage and is incorporated into the Google logo.

The first Google Doodle marked Google founders Larry Page and Sergey Brin’s visit to the 1998 Burning Man Festival and was a stick-man standing behind the second ‘o’ in the Google logo.

A team of illustrators, graphic designers, animators and artists work on the Google Doodles each day and the logos are hyperlinked to a page that provides more information about the cultural event celebrated.