‘Who would admit they fancy you?’ asked my TV wife Susanna Reid

There are two Rebecca Fergusons in showbusiness: one is the world-class movie star of smash-hit films including The Greatest Showman, The Girl On The Train and two of the Mission: Impossible blockbusters. The other is a singer who came second on The X Factor in 2010.

Today, I found myself sitting on a BBC sofa with the first Rebecca Ferguson, as we both waited to tape interviews with Radio 2 legend Steve Wright. ‘Do you ever get mistaken for the other one?’ I asked her.

‘Look at this,’ No 1 replied, showing me the BBC security pass she’d been issued today – that revealed a beaming photo of No 2.

We both burst out laughing.

Lego has produced official models for Susanna Reid and me. Mine depicts me in a smart suit and clutching a newspaper, looking like a slick, professional, hard-nosed newsman.

Susanna’s depicts her with a filthy scowl and clutching a mug, looking as if she’d just returned from very unwillingly making my morning tea.

Ironically, kettles have boiled less furiously than Ms Reid when the two figures were delivered to our Good Morning Britain desk.

Russell Howard has savaged me as a ‘bellowing, angry, pantomime bulls***, rent-a-mouth gun for hire’.

I have only one thing to say by way of response: who is Russell Howard?

I’ve flown to Los Angeles, and arrived to a text from Bear Grylls: ‘Got time for a coffee and chat?’

I jumped at the chance; time with the fascinating former SAS man is always time well spent. And, let’s be honest, Bear and I could be twins: both swashbuckling, handsome global TV stars who have perfected the art of survival. We also both have three sons, and discussed fatherhood at the King’s Road Café in Beverly Hills. ‘I encourage my boys to take risks, dream big, and to embrace failure,’ he said, which is the exact same mantra I’ve always adopted with mine.

‘The failure bit is so important,’ I said. ‘I’ve learnt way more from failures in my life than any successes.’

‘As Churchill said,’ I added, ‘success is going from failure to failure…’

Bear interrupted to finish off the quote: ‘… without any loss of enthusiasm.’

We chuckled, but it’s so true.

Success is great, but it’s how you deal with failure that may well define your life.

The world’s top wildlife photographer, David Yarrow, threw a birthday dinner party at the Sunset Tower Hotel in West Hollywood. He’d just returned from Montana, where he’d been photographing supermodel Cindy Crawford and a large wolf. ‘How did it go?’ I asked.

‘Great,’ he replied, ‘right up to the point where I threw a big slab of raw chicken at the wolf and it flew on to Cindy’s face.’

‘She just slowly peeled it off and said, “That was very… inappropriate.” ’

Former Prime Minister John Major was typically diplomatic in a quick-fire Q&A put to him by The Times.

A. ‘Boycott was a great cricketer but so is Joe Root.’

Major was sitting on the fence so hard I feared he’d get splinters.

Then he finally got a question that provoked him into absolute certainty:

To be fair, I agree with him.

Sharon Osbourne has been ‘exposed’ by the National Enquirer for her supposed ‘TRAGIC BATTLE WITH TOURETTE’S’.

When I worked with Sharon on America’s Got Talent, I was often on the receiving end of ferociously foul tongue-lashings from the planet’s pottiest mouth.

But it had nothing to do with the serious medical disorder that makes sufferers lose control of their language – and everything to do with the fact she just loves swearing. To prove this, Sharon posted the Enquirer exposé to Instagram, with the caption: ‘How the f*** did these mother******* find this s*** out?’

I also beat two other nominees, Ant and Dec, to a trophy for the first time in my life, something I know will cause the smug silverware-snaffling duo indescribable pain. 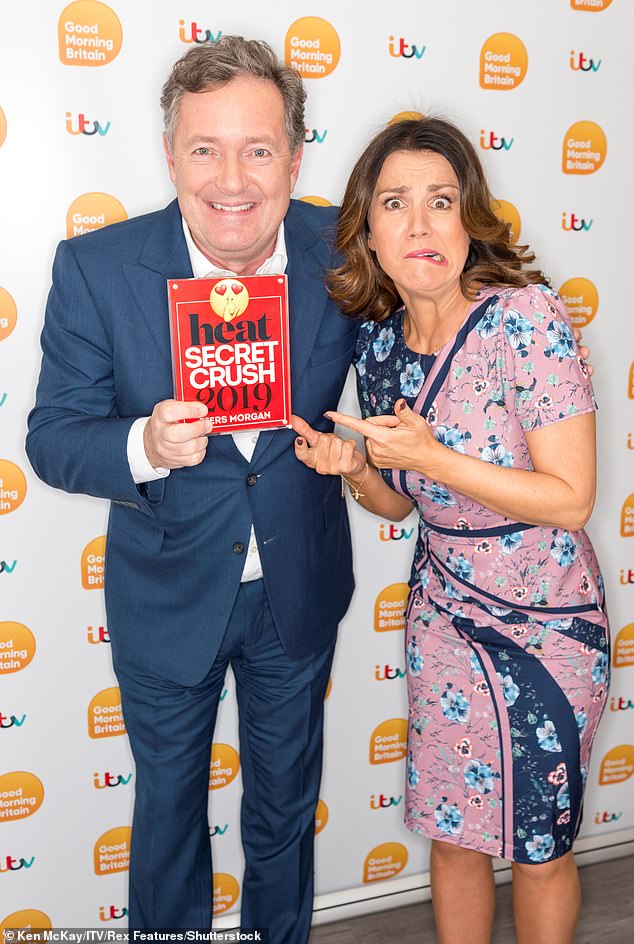 My TV wife Susanna Reid said: ‘No wonder you won a Secret Crush award. Who in their right mind would go public with an admission that they fancy you?’

Even more satisfyingly, Heat said I won by ‘an absolute landslide’, with more votes than the rest of the top five (Lee Mack, Declan Donnelly, Phillip Schofield, Dave Vitty) combined. Editor-in-chief Julia Davis said: ‘Readers voted in their thousands for famous men who make them go weak at the knees. We didn’t think anyone could fancy Piers more than he fancies himself, but it’s happened.’

My wife Celia reacted with bemusement when I broke the news: ‘People are weird, aren’t they? I only married you for the handbags.’ My TV wife Susanna Reid was less surprised: ‘No wonder you won a Secret Crush award. Who in their right mind would go public with an admission that they fancy you?’

Then she saw my suspicious smirk.

‘And don’t get some deluded idea that because I’ve never said it publicly, I must be one of your voters!’

Methinks the lady doth protest too much.