Chris Smalls, 31, organized the strike after working for Amazon for five years

The New York state attorney general has threatened to sue Jeff Bezos-owned Amazon for firing the worker who organized a walkout over conditions on Monday.

‘At a time when so many New Yorkers are struggling and are deeply concerned about their safety, this action was also immoral and inhumane,’ she said in a statement.

James said she was exploring options for legal recourse and had asked the National Labor Relations Board to investigate the incident.

Father-of-three, Smalls, 31, a management assistant at the Staten Island facility, was laid off from his job following Monday’s strike. He had worked for the company for five years.

An estimated 50 to 60 employees joined the walkout at the New York facility demanding that it be shut down and cleaned after a worker tested positive for the coronavirus.

Workers at Whole Foods, also owned by billionaire Bezos, are set to strike Tuesday, with a nationwide ‘sick out’ planned to bring attention to safety and wage concerns for people laboring through the coronavirus crisis.

Bezos, the world’s richest man, made $3.4billion selling shares of the company in February, just before the market tanked as coronavirus infections soared.

General Electric workers have also staged their own silent protest –  demanding that they now make the much needed ventilators in its jet engine factories.

There are now more than 164,000 confirmed coronavirus cases across the nation; the death toll stands at 3,050. 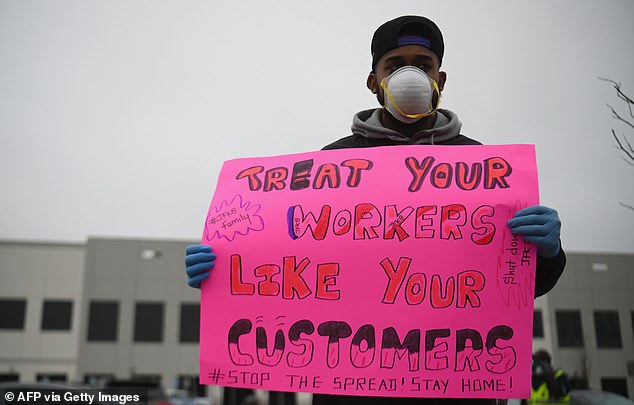 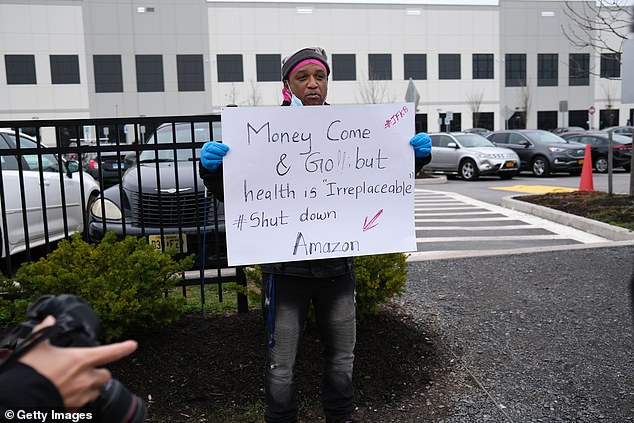 Fired Amazon worker Smalls told The New York Post: ‘They pretty much retaliated against me for speaking out. I don’t know how they sleep at night.’

‘There are positive cases working in these buildings infecting thousands,’ warehouse worker Smalls wrote on Twitter.

Amazon, the world’s largest online retailer, said it has taken ‘extreme measures’ to clean buildings and obtain safety gear and that ‘the vast majority of employees continue to show up and do the heroic work of delivering for customers every day.’

Less than half a percent of its more than 5,000-person workforce at the Staten Island site protested, it said.

From delivery drivers to grocery store clerks, shelf stockers and fast-food employees, workers have kept food and essential goods flowing to people who have been told by their governments to stay home to stop the spread of coronavirus.

A group calling itself ‘Whole Worker’ said it was seeking guaranteed paid leave for quarantined Whole Foods workers, among other things.

Among the strikers Monday were some of the roughly 200,000 workers at online grocery delivery company Instacart, according to strike organizer Gig Workers Collective, founded earlier this year by Instacart worker Vanessa Bain.

They joined employees at the headquarters in Boston calling on the company to make ventilators.

General Electric has fired nearly 2,600 workers, along with further ‘temporary’ layoffs. The company said: ‘GE is working around the clock to increase production of much-needed medical equipment. GE Healthcare has already doubled ventilator production capacity, with a plan to double it again by June, in addition to partnering with Ford Motor Company to further increase ventilator production.’

It was not clear how many Instacart workers were participating in the strike.

The San Francisco-based company – which lets customers place online orders from grocers, retailers like Costco Wholesale Corp and CVS Health Corp’s CVS Pharmacy – said in a statement that the strike of its contractors had ‘absolutely no impact to Instacart’s operations.’

On Monday, Instacart said it had 40 per cent more shoppers on the platform than on the same day last week and sold more groceries in the last 72 hours than ever before.

In posts on social media, people who said they were Instacart workers demanded hazard pay to account for the dangers of working while most people stay home to comply with state, local and federal government guidance.

They also asked for the company to provide hand sanitizer, disinfectant wipes and soap to clean their cell phones, cars and shopping carts.

Amazon said fired Smalls made ‘misleading’ statements about conditions and that he was supposed to be in quarantine and had no choice but to fire him after he came to the facility.

Smalls had even posted on Twitter how the company was not following social distancing measures.

Amazon staff say they are struggling to access sick pay and fear colleagues are coming to work ill – as they paint a grim picture of coronavirus protections inside warehouses where ‘everything has been touched by 1,000 hands.’

The online retail giant has increased pay and offered sick leave to anyone who has tested positive for coronavirus, but critics accuse the $1trillion company and owner Jeff Bezos of failing to do enough – just weeks after he pocketed $3.4billion by selling stock.

Bezos, the world’s richest man, made $3.4billion selling shares of the company in February, just before the market tanked as coronavirus infections soared.

The sale saved Bezos a staggering $317million, compared to him keeping the stock through to March 20.

It also meant the billionaire sold as much stock in that one week as he has in the last year, the Wall Street Journal reported.

The sale accounted for around 3% of Bezos’s total Amazon shares, and made up over a third of all stock exchange sales during this timeframe.

Bezos has also suggested that Amazon may be the solution to getting ‘easy-to-access’ COVID-19 test kits to people across the world after conversations he had with administrators in the World Health Organization.

In an Instagram post last week, the Amazon CEO shared that he had had a good call with WHO Director-General Dr Tedros Adhanom.

The announcement comes as workers from facilities across the US have tested positive for coronavirus.

‘This isn’t business as usual, and it’s a time for great stress and uncertainty. It’s also a moment in time when the work we’re doing is its most critical,’ the billionaire wrote in the memo shared on his Instagram.

Bezos said: ‘Across the world, people are feeling the economic effects of this crisis, and I’m sad to tell you I predict things are going to get worse before they get better.’ 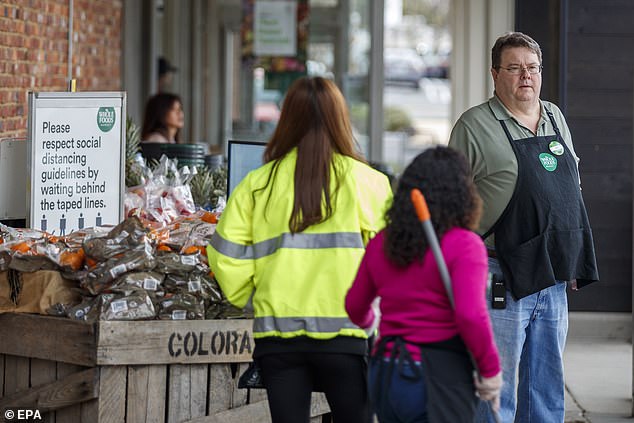 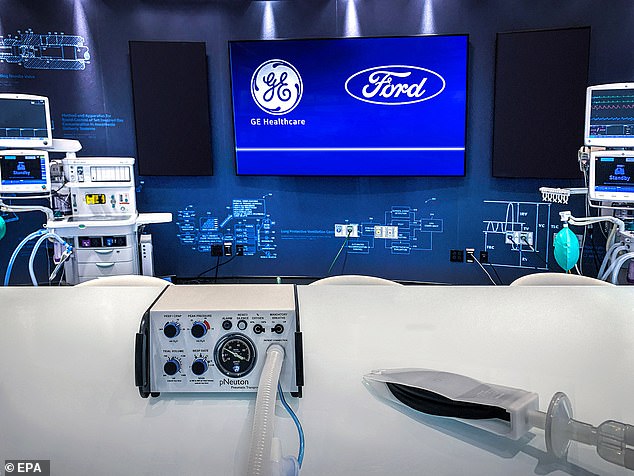 A model A-E ventilator and a simple test lung, on display at a plant in Rawsonville, Michigan 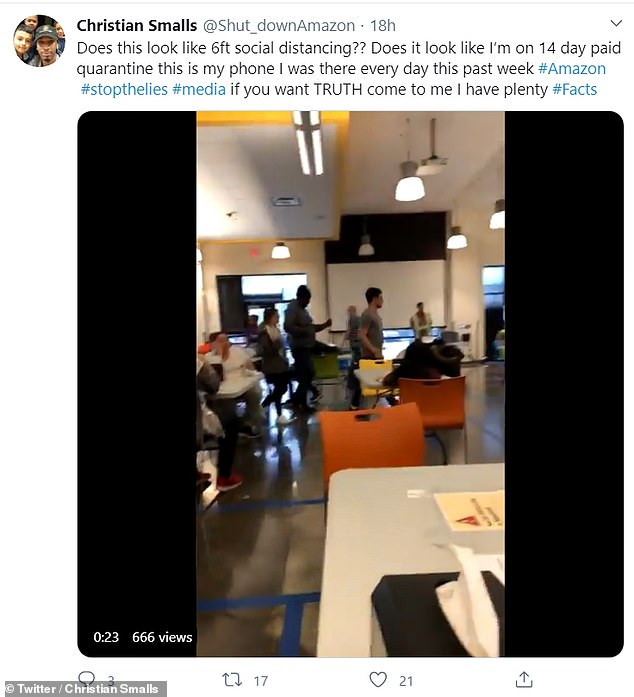 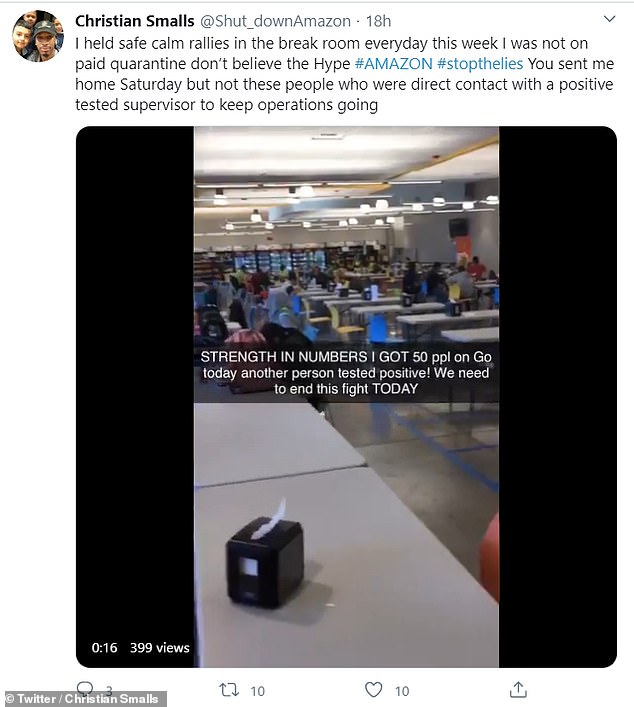 ‘Like all businesses grappling with the ongoing coronavirus pandemic, we are working hard to keep employees safe while serving communities and the most vulnerable,’ Amazon said in a statement.

‘We have taken extreme measures to keep people safe.’

The company said Amazon’s firing of Small was due to his failure to comply with the company’s request that he self-isolate after he came in contact with another employee who tested positive for COVID-19.

By taking part in Monday’s demonstration, he put ‘the teams at risk. This is unacceptable,’ Amazon said in a statement, noting that only 15 of the more than 5,000 employees at the site had taken part in the protest. 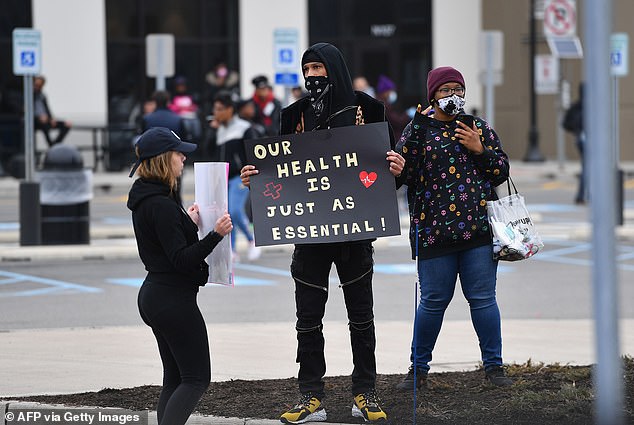 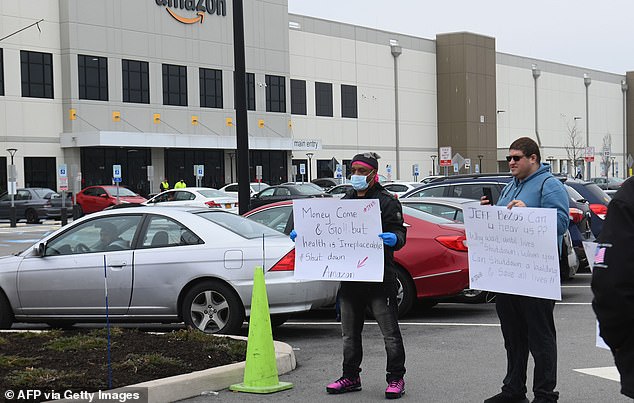 Instacart, which shares the same complex as Amazon in Staten Island recently announced plans to hire some 300,000 people to help meet demand for grocery delivery, said in a statement it was ‘fully operational’ and that the walkout caused ‘no impact.’

‘We’re continuing to see the highest customer demand in Instacart history and have more active shoppers on our platform today than ever before picking and delivering groceries for millions of consumers,’ said the San Francisco company, which operates in some 5,500 cities in the US and Canada.

The firm said Sunday it would provide additional health and safety supplies to full-service ‘shoppers’ and would set a ‘default’ tip based on customers’ prior orders.

The labor group, whose numbers were not known, called the Instacart moves ‘a sick joke.’ 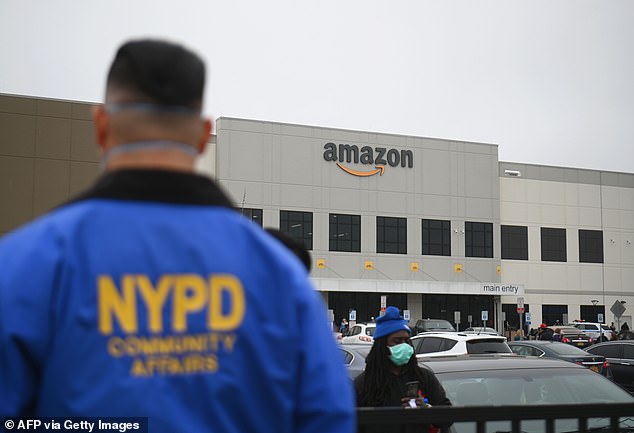 ‘We had been asking for hand sanitizer for many, many weeks. But apparently the company is capable of sourcing some with two days of work? Where was this before,’ the group said in a Medium post.

With much of the US population locked down, Americans are increasingly relying on delivery of food and other supplies from firms like Amazon.

A report by NBC News said Amazon workers at two Southern California warehouses had presented demands to shut down the facilities for two weeks for sterilization while employees are tested for the virus.

Amazon has announced plans to hire an additional 100,000 people in the US, while rival Walmart is seeking to expand its workforce by 150,000.

Coronavirus job losses could reach 47 MILLION as Macy’s furloughs most of its 130,000 employees WITHOUT pay and companies continue to lay off workers