Whether it’s reducing plastic bottle use or sticking on the laundry at a lower temperature, many of us have the best of green intentions. But could this have consequences for our health?

The finding was based on a report from a German hospital where babies were apparently colonised by a strain of antibiotic-resistant bacteria linked to pneumonia and soft tissue infections.

The ‘superbug’ was traced back to a washing machine, and the scientists said using the machine on cooler cycles encouraged bacteria to build up.

Other research has suggested that using a refillable coffee cup or water bottle may expose us to bugs such as E. coli (which can cause severe food poisoning). But this doesn’t mean we have to give up being eco-conscious. Here, we present expert advice on how to be both green and clean.

HOW TO WASH SAFELY AT ‘GREEN’ TEMPERATURES

Washing at 40c rather than 60c reduces energy use by almost 50 per cent. But while the clothes look clean, potentially harmful microbes may remain on them.

‘If you use less water or less heat, you need to use more chemicals or rinse for longer to try to physically remove the microbes,’ says Professor Sally Bloomfield, a consultant in hygiene and infectious disease prevention.

A BAR OF SOUP IS ALWAYS BEST

‘Bar soaps are a very hostile environment for bacteria,’ says Val Curtis, a professor of hygiene at the London School of Hygiene & Tropical Medicine. ‘The bacterial cells get exploded by the strong chemical concentrations. Bar soap is not the place you’re going to pick up people’s bugs.’

In fact, a landmark study from 1965 by U.S. scientists found there is no risk of bugs being transferred from one person to another via a bar of soap.

The researchers deliberately coated their hands with around five billion bacteria, including harmful strains such as E. coli, before washing them with a bar of soap. A second person then washed with the same bar of soap, but tests showed the bacteria didn’t end up on their hands.

‘You’re more likely to transmit bacteria to the plastic pump of a bottle of hand soap than to a bar of soap, as the plastic is a much less hostile environment to bacteria,’ adds Professor Curtis.

Heat is key to inactivating bugs, according to a 2014 study in the Journal of Applied Microbiology, which compared wash cycles between 20c and 60c.

Washing at more than 50c for just 15 minutes reduced the number of all pathogens the researchers tested for by 99.99 per cent. But, the results suggested, you would have to wash at 30c for 90 minutes to achieve the same result — and this wasn’t as effective at removing Candida albicans (a common cause of fungal infection) and Trichophyton mentagrophytes (which can cause ringworm).

To wash at lower temperatures hygienically, Professor Bloomfield recommends using an activated oxygen bleach (AOB) product. This kills bacteria by actively breaking down their cells. But, unlike the bleach you might use to clean the loo, AOB is relatively safe for the environment, as it breaks down into water and oxygen.

GO HOTTER FOR TOWELS AND UNDIES

Professor Dirk Bockmuhl, a microbiologist from Rhine-Waal University of Applied Sciences, says underwear and hand towels should always be washed at a higher temperature.

A problem with routinely washing at 40c or lower, Professor Bockmuhl says, is that biofilms — structures formed by micro-organisms bonding to stick to a surface — can build up in the machine and could transfer to clothes. ‘At lower temperatures, you have no chance of removing these biofilms.’

Professor Bockmuhl recommends doing a 60c wash ‘at least once a month’. He also suggests leaving the machine door and detergent drawer open after a wash so the machine dries properly, as bacteria thrive in moist environments.

Val Curtis, of the London School of Hygiene & Tropical Medicine, suggests one way to environmentally offset the occasional hot wash is simply to wash other items a little less frequently. 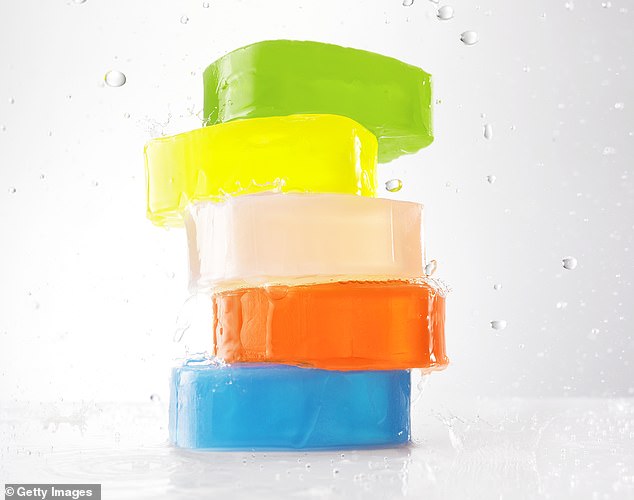 A landmark study from 1965 by U.S. scientists found there is no risk of bugs being transferred from one person to another via a bar of soap (file image)

SCRUB YOUR TRAVEL MUG RIGHT AWAY

Concerns about disposable coffee cups and plastic water bottles have led to many more people buying reusable cups and flasks. But how often are you washing yours? You should be giving it a scrub straight after your drink is finished.

A 2018 study by Aston University, in Birmingham, compared levels of bacteria in reusable coffee cups that had been washed after use or left with dregs in. They found that levels were higher when cups had been left dirty.

‘Residue left in reusable cups is a good source of nutrients for bacteria, which can multiply rapidly during storage,’ says Anthony Hilton, a professor of applied microbiology at the university.

In 2018, Public Health England (PHE) advised washing travel mugs after every drink. ‘If the cup is dirty, hot water alone is not enough — you need detergent, too. And if the water is OK for your hands, it’s too cool to kill bacteria,’ says PHE’s Nick Phin.

The same is true for reusable water bottles. ‘I always put them in the dishwasher, even though many bottles say they aren’t dishwasher safe,’ says Dr Lisa Ackerley, a chartered environmental health professional. ‘It’s hard to get them clean enough washing by hand.’

WHAT ABOUT ‘ECO’ DISHWASHERS?

Professor Bockmuhl says dishwashers use less water and energy than washing dishes by hand (provided the machine is full). And for maintaining hygiene, there seems to be no problem with using the ‘eco’ setting.

Old-fashioned cleaning methods, such as making your own kitchen spray with white vinegar, are back in favour.

Commercial sprays are not always recyclable and there are health concerns about the chemicals used in them.

Research by Harvard University last year found that people who used bleach and alcohol-based products once a week had a higher risk of lung diseases.

We should use such products only when we really need them, says home hygiene expert Professor Sally Bloomfield, such as after preparing raw chicken or to clean frequently touched surfaces like taps.

‘Everything still comes out more or less sterile,’ says Professor Bockmuhl, who co-authored a study in 2016 that compared microbe counts after various dishwasher cycles.

The study also found interior surfaces of most dishwashers were ‘almost germ-free’. Dishwashers finish off by drying with steam, which helps to sterilise items.

KEEP A SEPARATE BAG FOR CHICKEN

‘A problem with reusable shopping bags is that meat packaging is highly likely to be contaminated on the outside as well as on the inside, so pathogens could be transferred on to your bag,’ says Lisa Ackerley.

‘They are infectious at low doses and you really don’t want them to get on other ready-to-eat foods, such as ham, cheese or fruit.’

And don’t assume any bugs will soon be gone. ‘E. coli can survive for months,’ she adds.

‘You could wash a fabric bag, but you would need to use a high temperature and a chemical disinfectant. A simpler way is to keep separate bags for ‘dirty’ things, so one for meat and another for vegetables with soil on them.’

IS IT SAFE TO REUSE A BEESWAX WRAP?

Alternatives to cling film and single-use freezer bags, such as washable, reusable beeswax wraps (from £7, beeswaxwraps.co.uk) are becoming increasingly popular, but are they hygienic?

‘Try to use them for the same thing every time,’ advises Lisa Ackerley. To be completely safe, don’t use reusable beeswax wraps for raw meat or fish and wash them in warm, soapy water after use, then leave them to dry fully.