Why cuts in your mouth heal faster

Wounds in your mouth can heal up to 10 times faster than skin cuts, a study has revealed.

Injuries inside the mouth recover quicker because the tissue in the mouth is constantly ready to regenerate itself, research found.

Mouth wounds also close up without leaving a scar, which has led scientists to look at a way of mimicking the process to improve the treatment of skin wound healing.

Researchers discovered the mouth has more activitity in proteins which reduce inflammation and fire up the cells needed to close wounds.

Boosting the amount of this protein in mice’s skin quickens skin healing time by a third – the scientists hope their findings can improve medics’ ability to treat damaged skin.

Skin in the mouth is constantly ready to heal itself, scientists say, which explains why injuries in the cheeks and lips heal faster than those on our arms

Researchers from the University of California in San Diego tested the difference in healing speed by making cuts on 30 volunteers’ arms and inside their mouths.

Proteins which speed mouth healing are not found in the skin

And the difference is because there are proteins controlling the healing process in the mouth which are not present in arm skin.

These proteins mean skin cells are constantly repairing or on standby to fix the lining of the mouth, but the same thing does not happen on the outside of the body.

Mouth injuries heal quickly – in as little as six days without leaving a scar, in the study – whereas arm wounds often take longer than two weeks to fully recover. 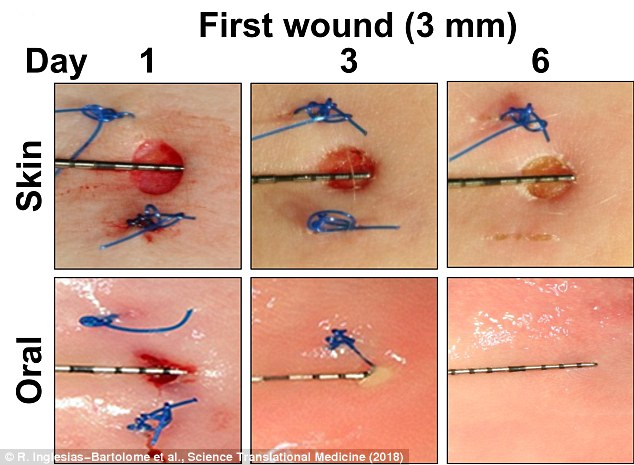 In the University of California’s study wounds in the mouth could heal up without a trace within six days, but the skin remained damaged for much longer and was more likely to scare

Membranes could heal faster because we evolved underwater

The researchers now suggest the mouth could hold clues to how to make skin heal faster all over the body, after boosting the levels of one of the proteins in mice shortened skin healing time from nine days to three.

One expert suggests moist membranes in the body may heal better because we evolved from underwater creatures.

Luis Garza, a skin researcher and dermatologist at Johns Hopkins School of Medicine told Science News: ‘We spent most of our time learning how to repair wounds underwater. So it makes sense that we repair wounds really well on our moist mucosa.’

HOW TO DEAL WITH MOUTH ULCERS

Mouth ulcers are common and are often caused by damage to the mouth’s inner lining. They are not contagious and usually clear up on their own.

There is no quick fix to healing an ulcer, but avoiding things which irritate them can help them to disappear faster.

People who are suffering with a painful ulcer should: try to avoid very spicy, salty or acidic food; avoid food which is rough or crunchy; not chew gum; and not use toothpaste containing sodium lauryl sulphate.

The NHS recommends using a soft toothbrush, drinking cool drinks through a straw, focusing on softer foods, and eating healthily to try to help the ulcer heal and prevent it from returning.

Ulcers may be caused by biting, cutting or burning the inside of your mouth, or by stress, anxiety, hormones, certain medications or smoking.