Why do celebrities call the shots for vaccines? How stars have affected national trends

In 1956, Elvis Presley – the most popular American celebrity at the time – posed for the cameras as New York City health officials administered the polio vaccine.

The shot for the deadly virus had been approved only a year earlier and the publicity stunt was meant to show the public that the vaccine was safe.

Since then, stars have continued to use their platforms to promote their views on vaccines – but for different reasons, with some urging fans to get them, some claiming that the vaccine schedule is too crowded, and others linking jabs to developmental disorders.

This has led to mounting distrust among some parents, who decide not to vaccinate their children – in turn causing recent outbreaks of preventable diseases not seen in years such as measles and whooping cough.

So why are we more ready to follow the advice of celebrities with no medical expertise than our own doctors?

Dr Michael Angarone, an assistant professor of medicine at Northwestern University Feinberg School of Medicine in Chicago, spoke to Daily Mail Online about why he believes we listen to celebrity vaccine skeptics – and the fatal danger it could lead to. 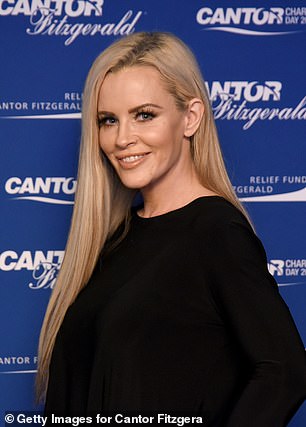 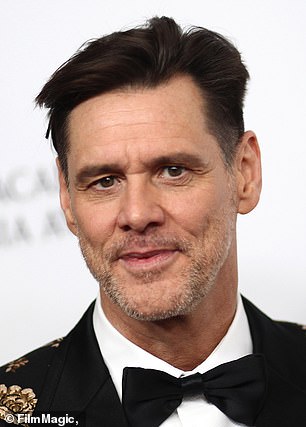 In the last 10 years, several Hollywood stars have come out voicing their opposition to vaccines. Perhaps the most famous of the critics was actress Jenny McCarthy (left) and her onetime boyfriend Jim Carrey (right)

As part of Elvis Presley’s appearance on The Ed Sullivan Show in October 1956, the singer posed for the cameras as two health officials injected his upper left arm.

It seemed to work among Presley’s fan base: Americans under 20 years old.

In the first national survey taken in August 1957, 75 percent of this age group had received the vaccine. By September 1961, the number jumped to about 90 percent, reported NBC News.

He did the stunt yet again in March 1958 as he was photographed being given a series of shots for typhoid, tetanus, and Asian flu after he was drafted into the US Army.

But in the last 10 years, several Hollywood stars have come out voicing their opposition to vaccines, with perhaps the most famous of them being actress Jenny McCarthy.

In 2007, she revealed her son Evan was diagnosed with autism and appeared on several shows, including Oprah and Larry King Live, arguing that vaccines can trigger autism – a claim that has been debunked by scientists.

Since then, a multitude of celebrities have come out against immunizations including actress Alicia Silverstone, tattoo artist Kat Von D, and actors Charlie Sheen and Jim Carrey.

Even President Donald Trump has tweeted more than 20 times about how there is a link between vaccines and autism.

In regards to the vaccination schedule, Trump has stated that he would prefer ‘smaller doses over a longer period of time’.

In January 2017, he met with Robert F Kennedy Jr, son of former US Attorney General Bobby Kennedy, who has advocated that parents should choose whether or not they want their children immunized.

Kennedy told reporters at the time that he had been asked to chair a commission to review vaccine safety.

But, in February, Kennedy told The Guardian he hadn’t heard from the White House in six months and there has been ‘zero progress’ – implying the administration has abandoned its plans for the committee.

Dr Angarone told Daily Mail Online that people listen to celebrities because they have platforms to promote their views. 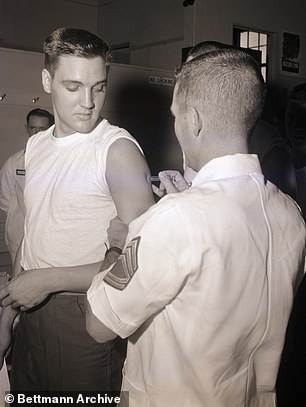 Presley performed a stunt yet again in March 1958 as he was photographed being given a series of shots for typhoid, tetanus, and Asian flu after he was drafted into the US Army (pictured)

‘People put faith in what they’re hearing from someone they look up to whether it’s a popular figure or a celebrity,’ he said.

‘We think: “I like what [this celebrity] has to say about other things they like or they’re in a movie I like so I trust them”.

‘Then, when [celebrities] say: “I’ve witnessed or I’ve seen or I think there’s a problem with vaccines”, we’re more likely to trust that opinion than that of a doctor.’

And this trust has been made apparent in recent outbreaks of diseases not seen in years – with deadly consequences.

In one example, Dr Angarone pointed the measles outbreak that has been sweeping across Europe.

Between September 2017 and August 2018, the World Health Organization has reported more than 41,000 cases with 40 deaths in EU member states.

Meanwhile, in the US, health officials have said an estimated 80,000 Americans died of the flu and its complications last winter, the disease’s highest death toll in at least four decades.

Across the US, 179 children died and thousands were hospitalized. The Centers for Disease Control and Prevention (CDC) said 80 percent of the children who died were not vaccinated.

So with all the mounting evidence about the dangers of not staying up-to=date on our vaccine schedule, why do we listen to the skeptics?

‘As humans, we don’t understand all the statistics that go into the studies that show vaccines are safe,’ said Dr Angarone.

‘Or people may think that the people who perform these studies are working for the companies that make the vaccines.’

He adds that he believes a lot of celebrities probably don’t remember a time from before vaccines were commonplace.

‘There are infections we haven’t seen in years or we can’t remember the last time we saw them,’ Dr Angarone said.

‘So they ask: “Why should I vaccinate myself or my child if the disease is not around?” Well, then we’ll start seeing more cases of measles, mumps, and polio again.’

A CDC report released earlier this month found that around 100,000 children – or around 1.3 percent of all children born in 2015 or later- had not received a single vaccination.

Dr Angarone says inoculations not only protect individuals, but the community as a whole in what is known as ‘herd immunity’. 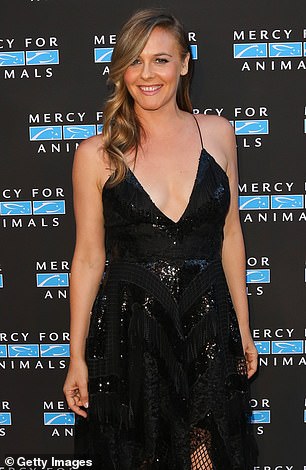 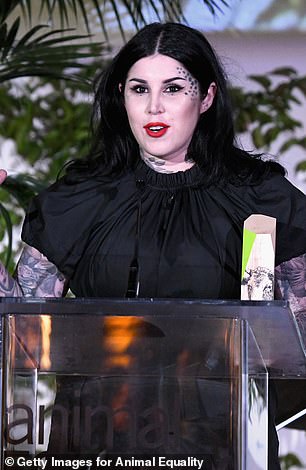 Infectious disease specialist Dr Michael Angarone told Daily Mail Online that we often listen to people we admire, including celebrities. Additionally, they have a platform, which is something most doctors don’t have. Pictured: Vaccine skeptics Alicia Silverstone (left) and Kat Von D (right) 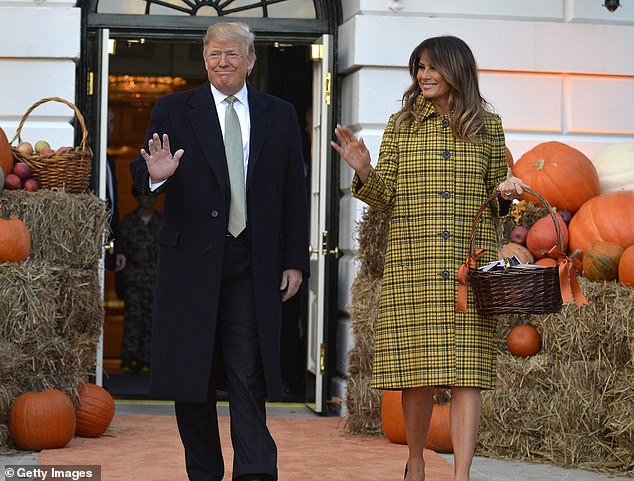 President Donald Trump has tweeted more than 20 times about how there is a link between vaccines and autism, a claim that has been debunked by scientists. Pictured: President Trump and First Lady Melania Trump welcome trick-or-treaters on Sunday at the White House

‘If you or I get influenza, we’re sick for a week with a sore throat or fever,’ Dr Angarone said.

‘But children and adults who are immunocompromised, they are more prone to developing pneumonia from the flu or from bacteria from a secondary infection.

‘By getting a vaccine, we’re not only protecting ourselves but we’re protecting others on a daily basis.’

However, not all celebrities use their influence to argue against vaccination.

Actress Selma Hayek has been a spokeswoman for the Pampers/UNICEF campaign One Pack = One Vaccine for more than a decade.

The campaign seeks to eliminate tetanus in mothers and their newborns.

‘The thought of losing a child to a disease which can be easily prevented seems unbearable, especially when it is within our power to prevent it. If you knew how to help save a child’s life, what could stop you?’ Hayek said during one speaking event.

Dr Angarone says that at the end of the day, speak to your physician if you have questions about vaccines.

‘Your physician is your expert on your health. They will know how to best treat the illness you have,’ said Dr Angarone.