Why doing business in Germany during Corona is beneficial 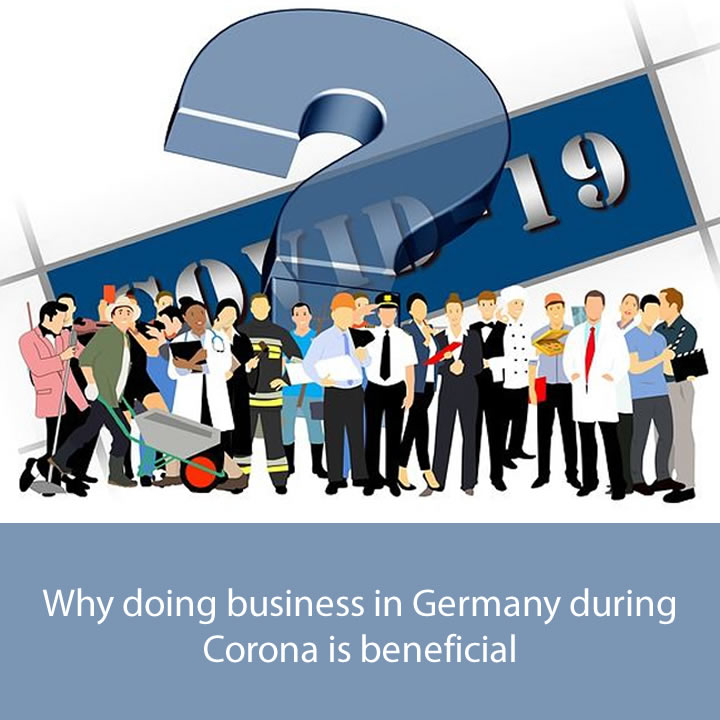 During the tough times of Corona, many businesses found themselves in the situation of uncertainty or even despair. From this article you will learn how the German government supported German entrepreneurs and why starting a business in Germany during COVID-19 is safer than in most other countries.

During the tough times of Corona, many businesses found themselves in the situation of uncertainty or even despair. They faced constant restrictions und income drops, especially when it came to small and medium-sized companies. Many of them could not manage to keep their head above the water, went bankrupt and had to close the business. In the meantime, others chose to start a business in Germany and got plenty of benefits from the government that helped them stay afloat.

Wondering how that is possible during the pandemic that’s affected companies all around the world? The answer is hidden not in “how” but rather in “where”. Doing business in Germany enabled many entrepreneurs not only to survive during Corona but also to prosper. The German government came to rescue and supported those who needed it the most and exactly when the help was needed. Those who decided to start a business in Germany stayed safe and confident about their future.

What is it exactly that the German government did to support the businesses that no other country went for?

1. According to the Federal Ministry of Finance (www.bundesfinanzministerium.de), the German government developed a so-called Protective Shield to support companies, employees and the self-employed. It is considered the biggest supporting aid package in the German history. The number of funds devoted to the support measures was 353,3 billion euro. And the amount of guarantees was 819,7 billion euro. Doing business in Germany may never have been this safe.

2. The German government organized an immediate financial support for small businesses and the self-employed. They processed over 2 million applications and assigned funds in the amount of 13,5 billion euro for this goal. Many entrepreneurs were reassured that starting a business in Germany was the right choice.

3. The Federal government issued a Corona Tax Aid Law to make sure that German businesses safely make it through the crises without significant losses. Depending on the branch, they received several tax reliefs such as adjustment or refunds of tax payments. Among other measures, the catering industry received a reduction in the VAT rate for meals of 7%.

4. Since many companies had to switch to home-offices and working remotely, there were several projects developed to support digitalization, such as “go-digital”, “Digital Now” (Federal Ministry for Economic Affairs and Energy) or “Digital Prize Berlin” (Investitionsbank Berlin). Each project consists of different modules. Those who start a business in Germany or already run one can study the offers and choose a suitable support program for themselves.

Now you have an idea how doing business in Germany can be beneficial even during Corona and why now is the right time to go for it. But that’s not the only good news for entrepreneurs. The world is moving forward and digitalization is really becoming more and more relevant. Now, even if you are an entrepreneur from outside of Germany or the EU, you can start a business in Germany — and do it fully remotely! With a special Project Management service of Nexus-Europe GmbH (  https://www.nexus-gmbh.biz/ ) your whole business in Germany can be set up and launched even without you leaving your current country.