Frances Sarkissian didn’t spot the bollard in front of her until she tripped over it, landing face-first on the pavement.

‘I didn’t get a chance to stick out my arms,’ says the 64-year-old project manager from London, recalling the mad dash through crowds three years ago.

‘There was blood everywhere — I was sure I’d broken my nose,’ she says. ‘In fact, while I’d broken a front tooth and sustained some nasty scrapes, I hadn’t broken any bones.’

She was luckier than many. For while we tend to think of heart disease and cancer being the big health issues of older age, the reality is a fall is far more common — and can be as catastrophic for some.

Fact: 50 per cent of judo training isn’t about combat, but learning to fall in a controlled way

Falls are more likely once you reach 60, with three in ten over-60s falling at least once a year. This is due to a combination of factors, including deteriorating muscle strength and poorer eyesight.

But a further consequence of ageing — osteoporosis, which leads to fragile bones that fracture easily — makes falling especially dangerous.

One in five over-60s suffers a fracture when they fall, with up to 75,000 older people admitted to hospital every year with a fractured hip — and after this, one in five cannot stand up again and ends up in a nursing home within a year. One in three dies within a year of this type of injury.

Even apparently minor injuries can lead to loss of confidence and independence. ‘So often, after a fall, people avoid activity and go out less, and that leaves them with weaker muscles, increasing the risk of falling again,’ says Sarah Leyland, a nurse with the National Osteoporosis Society.

Frances, who has since had three similar falls, admits these have left her shaken, and says: ‘I hang on to rails when I go down stairs.’

Back home, Frances checked the internet for information. ‘There’s lots of advice about getting your vision checked, wearing sensible shoes and doing exercises that improve strength and balance,’ she says. 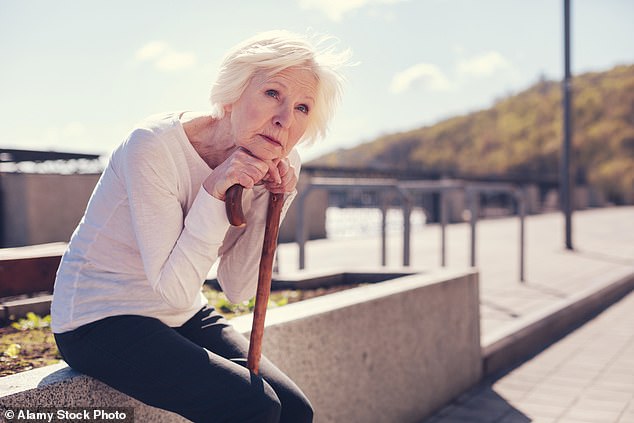 Did you know? 75,000 older people are admitted to hospital with a fractured hip, each year

If identified as a ‘frequent faller’, Frances could have been entitled to attend a six-month course, involving twice-weekly physiotherapy-led exercise to improve her strength and balance, recommended by the NHS.

However, access is limited. And there’s only ‘weak’ evidence that such interventions prevent fractures in older people, according to a review in The BMJ in 2016.

Yet if Frances lived in the Netherlands, it would be a different matter. There, anyone over 60 who falls is eligible for a five-week course that’s been shown to nearly halve the number of further falls.

The secret? People are taught judo-style falls that prevent broken bones. The technique is taught by more than 2,000 physiotherapists who’ve been trained by the Dutch Paramedical Institute.

‘As with anything else, the more often you practise falling, the more likely you will fall safely,’ says Frans Lanting, a physiotherapy coordinator at the institute.

The course, running since 2007, has been shown in trials to be remarkably effective. From January 2019, the Dutch Paramedical Institute will be providing the first English language course for UK physiotherapists. Now in my 60s, I went to Dalfsen, in the Netherlands, to find out whether learning judo falls is really a good idea for frail older people. The course was developed by Dr Vivian Weerdesteyn, a professor of human movement science at Radboud University Nijmegen — and a former junior international judo black belt.

She says: ‘About 50 per cent of judo training isn’t about combat, but about learning to fall in a controlled way.’

The key issue was ensuring that the course was safe for those with fragile bones. Dr Weerdesteyn’s team carried out studies measuring the impact of falling onto a judo mat and found falling from a kneeling position onto a thick mat is safe for people with severe osteoporosis, provided protective hip pads are used.

‘We teach people to fall from a standing position as well as kneeling,’ she says. ‘But it’s important people with fragile bones can do the course because they’re most at risk of serious injury from falls.’

When I turn up, I’m disappointed to find I wouldn’t be allowed to try to fall from standing for two weeks. But I get the idea after half an hour’s practice on a judo mat. A safe fall involves rolling backwards as slowly as possible, the body, curved in a C shape, head tucked into the neck, arms pulled into the chest.

But in real life, is there time to alter the course of a fall? The first Frances knew about her accident was finding herself face down on the pavement — and that’s horribly typical.

‘That may sound no time at all. In fact, it’s the difference between the first and last person reaching the finishing line in an Olympic 100m race. If you stumble for a few steps before you fall, you have even longer, several seconds.’

The course costs £310, with part or all of the bill picked up by Dutch health insurance.

I meet Corry Freijling, a 76-year-old retired nursery teacher with osteoporosis who was referred to the course after three falls left her with a fractured hip and knee, and two broken wrists. I still have falls — I recently fell off my bike in heavy traffic,’ she says. ‘But while I got a black eye, I didn’t fracture anything because I fell better. I didn’t throw out my arms or become rigid as might have happened before.’

During half of each two-hour session, participants complete a low-tech obstacle course designed to replicate daily trip hazards.

‘We know there’s a moment when you’re pushed off balance when you can either recover or lose it and fall over,’ says Dr Weerdesteyn. ‘So many people lose that ability to regain balance as they age.’

Yet research shows it’s possible to re-learn the skill — by experiencing loss of balance, or perturbation, repeatedly.

Indeed, ‘perturbation balance training’, tripping people up deliberately so they learn to regain their balance, is a ‘feasible and effective approach to falls reduction in a clinical setting’, according to a review in the journal Gerontology & Geriatrics.

I embark on the obstacle course, made up of stepping stones of different textures of carpet, a slippy oilcloth with wood under it, and narrow beams to walk along.

You then repeat it with lights dimmed or while listening to a taped story where you have to count the number of times a word is used to distract you from the obstacles beneath your feet.

‘There are two types of people who are at particular risk of falling,’ says Dr Weerdesteyn.

The first walk very slowly and cautiously, limbs rigid to try to maintain control. But this increases risk of falls, says Dr Weerdesteyn, a fact confirmed by research from Brunel University’s Centre for Sports Medicine and Human Performance. The second group rush around the course without paying proper attention.

Ananda Nanu, former president of the British Orthopaedic Association, says the scheme is an ‘interesting innovation’, but adds that ‘we shouldn’t forget the need to improve pavements and roads for pedestrians’.