Why IS Donatella Versace selling her family label to US giants Michael Kors?

Peroxide blonde and with a predisposition for skintight frocks and wearing sunglasses indoors, Donatella Versace might not look like the archetypal business woman — but her brain is every bit as sharp as her six-inch stilettos.

She has overcome seemingly insurmountable obstacles — from her brother’s murder to a crippling cocaine addiction — to transform Versace from a business on the brink of failure into a profitable enterprise with more than 200 boutiques worldwide and an estimated £592 million annual revenue.

Inexorably attached to the Italian fashion house since her brother Gianni was shot dead in 1997, Donatella, now 63, last year insisted she had no intention of abandoning her role as its artistic director and vice-president.

Yet, this week, it appeared she was doing just that, when it was announced that Versace has been sold to U.S. clothing giant Michael Kors for an astonishing £1.6 billion.

No wonder eyebrows were raised as far as the sartorial set’s Botox would allow, with fans scorning an acquisition they said would ‘ruin’ the brand and ‘kill’ the exclusive image on which it built its success.

Michael Kors, which last year bought Jimmy Choo for nearly £900 million, plans to open 100 new Versace boutiques in a bid to double sales, focus more on the lucrative accessories market and combine all three brands into a company called Capri Holdings, of which Donatella will lead the ‘creative vision’.

The mother of two, who owns the label with her other brother Santo, 73, and daughter Allegra, 32, insists the label had to be sold in order for it to ‘reach its full potential’.

She also stressed her ‘passion’ has ‘never been stronger’ — although passion for what is unclear. Was she referring to her passion for Versace or for the £200 million winging into her bank account following the takeover? Her passion for the luxury holidays she loves to share on Instagram, and will now have more time for — or her passion for her family, which has, at times, appeared pushed to breaking point by the cut-throat fashion world?

Either her decision to step back has been sudden or kept a fiercely guarded secret. Last September, she was emphatic about staying in her role, saying: ‘I’m not going anywhere right now,’ and, in an interview this month, Donatella waxed lyrical about her beloved brand without so much as a hint.

So, what possessed her to hand over the reins of her company? 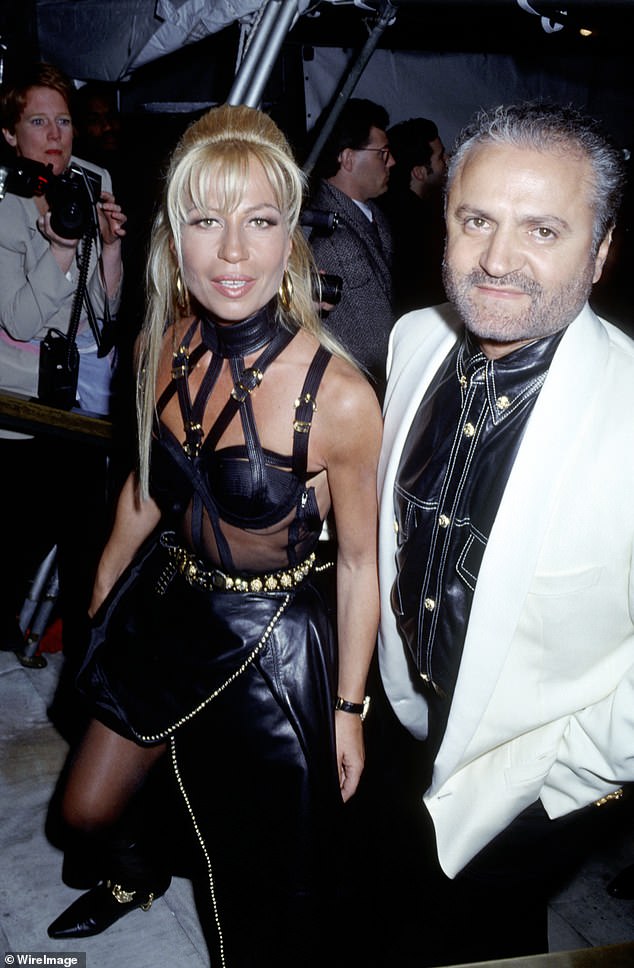 Gianni Versace with his sister Donatella Versace in 1993. She would inherit the brand after his death

A FUTURE SET IN STONE FROM BIRTH

The daughter of an Italian seamstress, Donatella grew up idolising Gianni, eight years her senior. ‘He made cool leather mini-skirts for me, took me to discos and treated me like a woman,’ she has recalled. ‘I was his doll and his best friend.’

Describing her youth as ‘the happiest time of my life’ she was, nonetheless, shackled by her sibling’s success and denied autonomy from an early age.

By the time she’d completed a languages degree, Gianni, who founded Versace in 1978, was already a successful designer and Donatella’s fate had been sealed: ‘I finished university and just ran to work with him. Actually, I didn’t have a choice. He said: “You come and you don’t move any more.” ’

Perhaps, after having her entire life mapped out, Donatella has finally snapped.

BLINDSIDED BY HER BROTHER’S MURDER

As Gianni’s ‘accomplice’ and muse, Donatella schmoozed the stars as Santo took charge of Versace’s business side. Helped by the Versace-clad, newly coined ‘supermodels’ who strutted the catwalk singing George Michael’s Freedom in 1991 and that safety pin dress Elizabeth Hurley wore in 1994, Versace’s status was consolidated.

But, on July 15, 1997, the openly gay designer was shot outside his Miami mansion by serial killer Andrew Cunanan, who apparently was jealous of Gianni’s success. Cunanan then took his own life.

‘The sight of my dead brother haunts me to this day. One bullet hit his neck, the other his face,’ said Donatella, who was then married to American model Paul Beck, with whom she had Allegra and a son Daniel, now 28.

She was shaken both by grief and the responsibility of having her brother’s company foisted upon her, in what she has suggested was an unfair ruse: Gianni, who idolised Allegra, then aged just 11, had left his niece 50 per cent of the company in his will, while Donatella inherited 20 per cent and Santo 30 per cent.

In so doing, Donatella says, he not only ‘put a tremendous burden’ on Allegra, but effectively trapped his sister: ‘By giving half of Versace to my daughter, he forced me to take responsibility for the company until she came of age.

‘Without this trick, I might have left the company after his death.’ 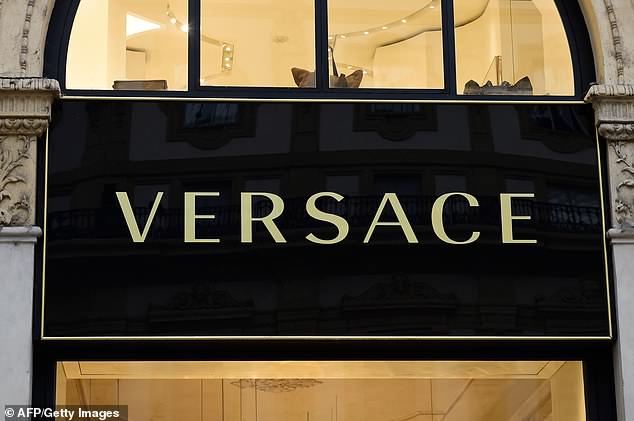 DOUBTS, DEBTS AND A DRUG HABIT

Now in charge, Donatella’s early collections were panned. Having taken cocaine since her 20s, her escalating addiction became an open secret in the industry and her leadership style erratic.

According to Deborah Ball, author of the book House Of Versace, Donatella rarely turned up to meetings before noon and, on occasion, openly snorted cocaine in front of staff. ‘For the first five years, I was lost,’ Donatella later admitted. ‘I made a lot of mistakes.’

Having boasted sales of more than £400 million in 1997, by 2004 the company was facing debts of around £90 million. Its clothes, capitalising on a Nineties era of conspicuous consumption, seemed increasingly irrelevant in the restrained Noughties and, by the middle of the decade, the business was close to going under.

‘I wanted to succeed for Gianni, because he cared so much for the company and I knew he would have wanted it to carry on,’ said Donatella.

‘But I was frightened and I had no confidence.’

Donatella discovered cocaine in the Eighties at celebrity-studded parties, admitting it fuelled the ‘best time’.

According to Gianni’s former partner of 15 years, Antonio D’Amico, the designer was ‘furious’ when he found out about his sister’s habit from their mutual friend, Elton John.

‘He was shocked,’ says D’Amico, who describes Donatella as a ‘monster’, on account of her difficult behaviour, and says she ‘became angry, frustrated and suspicious of the people around her. She was very difficult to deal with’. In 2004, during Allegra’s 18th birthday party dinner in Milan, Elton arrived to drag Donatella off to a rehab clinic in Arizona by private plane, where she remained for two-and-a-half months.

Donatella says: ‘Some evenings, I couldn’t function any more and embarrassed myself in front of my children. My self-hatred became more and more intense.

‘Nobody thought I would accept Elton’s offer, but a few minutes later, I traded my evening gown and diamonds for a jogging suit.

‘I made my way to the airport with a ponytail and no make-up.’

SAVED BY HER FEMININE REVOLUTION

AFTER emerging from rehab, Donatella focused on collections that contained less of her brother’s brash exhibitionism and were, as she put it, ‘more feminine’. The strategy worked: in 2006, the label posted profits of £14.2 million and, in 2007, sales rose 30 per cent.

Recent decisions have proved similarly successful, from the appointment of British CEO Jonathan Akeroyd, hired from Alexander McQueen in 2016, to Donatella dressing her friend and model-of-the-moment Gigi Hadid in a skintight Versace jumpsuit this year. ‘My revolution was successful,’ Donatella said, her pride in the transformation clear-cut — her decision to cash in now less so.

CHILDREN WHO SHUN THE LIMELIGHT

Given that Donatella describes Allegra and Daniel as her ‘greatest achievement’, it must be painful that both are deeply uncomfortable in the limelight. They are perhaps the biggest reason for selling up.

Allegra — who stands to inherit some £558 million after the Versace sale goes through — is a director of the company, but is not believed to have any great involvement in it.

This private former anorexia sufferer used her father’s surname to escape her legacy, but admitted in 2011: ‘Anywhere I went, I was Versace. I couldn’t escape and it did me harm.’

Daniel, a musician living in London who inherited his uncle’s art collection, is similarly keen to distance himself from his mother.

‘He doesn’t want people to know he is my son,’ Donatella has said, admitting that she had promised not to talk about him publicly. 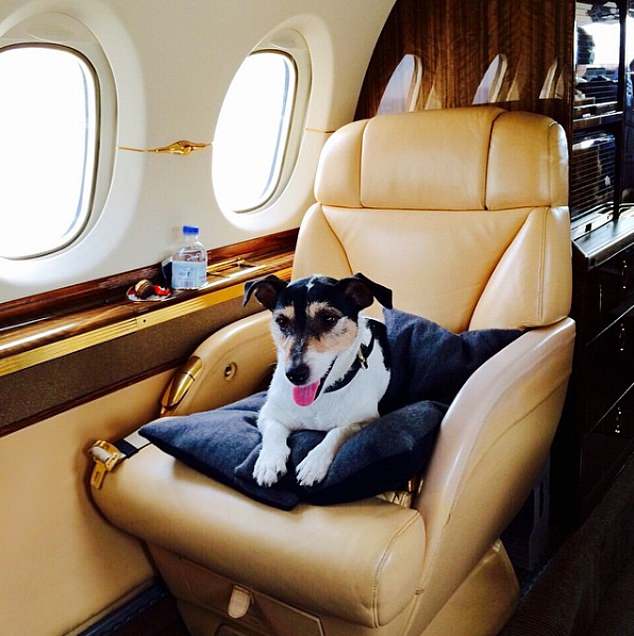 predatory in her approach to men, yet tight-lipped about her love life, Donatella might want to distance herself from Versace so that she can date in secret.

Not that she shows much intention of settling down.

‘Men are needed only for love affairs and for physical relaxation,’ she said recently, adding that there have been ‘others’ since her 2000 divorce but that: ‘I don’t need a husband or companion. I don’t like to live with anybody. I’m very happy and fulfilled with my private life.’

After divorcing Beck following 17 years together, she has made little comment about the marriage, other than to say they are ‘estranged’, but ‘civilised’.

Her reported second marriage, in 2004, to businessman Manuel Dallori, lasted just a year and has been kept even more secret.

She is, however, vociferous about her appreciation for the male form, sizing up a line-up of semi-naked male models on a tongue-in-cheek Instagram video and declaring unashamedly that: ‘I love being surrounded by gorgeous guys.’

‘MASK’ OF BLONDE HAIR AND MAKE-UP

Having first had highlights on the instruction of Gianni at the age of 11, her peroxide locks — at times enhanced to waist-length with extensions — are synonymous with her high-maintenance brand: her hairstyle, perma-tan and trademark black kohl-lined eyes an attempt to present a competent façade, especially during times of crisis.

‘My hair got blonder and blonder, my make-up thicker and thicker,’ she recalls of the period following her brother’s death.

‘I felt like the whole world was looking at me with daggers in their eyes and I created a mask that would give me protection.’

Having created ‘a second Donatella: cold and aloof, aggressive and scary’, she says she hasn’t been tempted to change her hairstyle because ‘blonde is a way of life. I survived the catastrophes in my life because of the strength that my blonde hair gives me’. 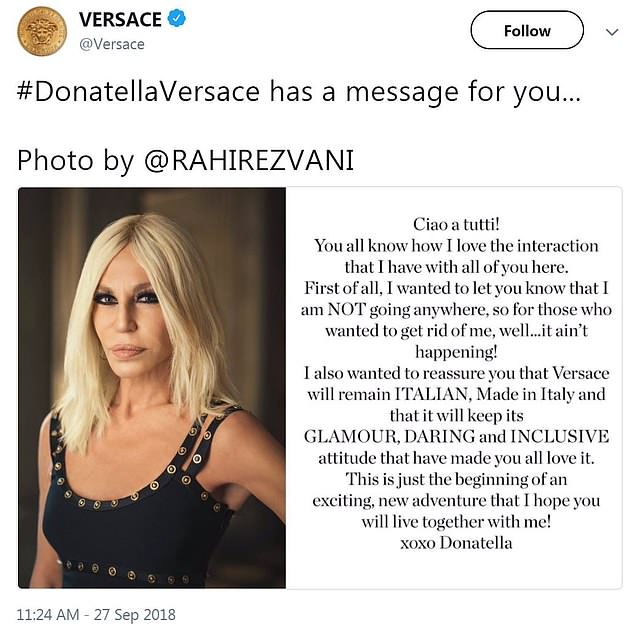 PROTEIN AND EIGHT ESPRESSOS A DAY

At a diminutive 5ft 2in, Donatella says she feels ‘naked’ without high heels — indeed, she even wore them to rehab.

Her whippet-thin frame, typically showcased in skintight jeans and dresses from her own line, is the result of ‘hard work’ — she claims to have exercised every day for the past 18 years ‘for at least five minutes’ and does a 45-minute cardio and weights routine four times a week.

Donatella — who quit her two packets of Marlboro Red habit in 2013 — once said she stopped seeing a personal trainer because he wouldn’t let her smoke.

As for her diet, lunch is salad and protein, with eight espressos a day as well as iced water sipped from a crystal glass to sustain her.

Home for Donatella is a palatial two-storey Milan flat that used to belong to Gianni, with marble columns, gold furnishings and vases of her favourite red roses.

Holidays are gleefully showcased to her 3.5 million Instagram followers, from the tour she filmed of her private pool in the Palazzo Versace in Dubai — the £500 million neoclassical palace she opened in 2016 — to the video of her on a yacht with an unidentified topless hunk, and the picture of her lying bikini-clad on her back in aquamarine water, alongside the caption: ‘Wake me up when August ends.’

One can only imagine she might get used to a life of leisure.