Why is KFC so popular for Christmas dinner in Japan?

A quirky tradition in Japan sees people tucking into a KFC bargain bucket on Christmas day, instead of a home cooked dinner, with orders booked weeks in advance.

Stores get a holiday-themed makeover in the run up to Christmas, decked out in red and green.

The ‘Kentucky for Christmas’ slogan was part of a marketing campaign in 1974 for the chicken franchise, and now every year around 3.6 million Japanese people sit down to eat KFC fried chicken for Christmas.

Even KFC’s mascot, Colonel Sanders, gets dressed up, with life-size models seen around Japanese cities, dressed as Santa Claus.

Colonel Claus! Even KFC’s mascot, Colonel Sanders, gets dressed up, with life-size models seen around Japanese cities such as Tokyo (pictured)

The campaign started in the 70s to tempt tourists and expats with chicken on Christmas Day when they couldn’t find turkey to eat, and was the the brainchild of Takeshi Okawara, the manager of the first KFC in the country, according to the BBC.

Okawara said publicly that the idea came to him in a dream, where he imagined people eating KFC at a Christmas party.

However, the real story is that it resulted from a moment of desperation and a slight tweaking of the truth – something he is said to ‘regret’ today.

Business Insider reports that he was sleeping on sacks of flour after opening his own branch of KFC, and the Westernised red and white signage confused the locals, who would come in and ask if he was running a barber shop.

Knowing his business was on the line, Okawara went on the radio to explain that the custom of Kentucky Fried Chicken for Christmas instead of turkey was a popular tradition in the West. 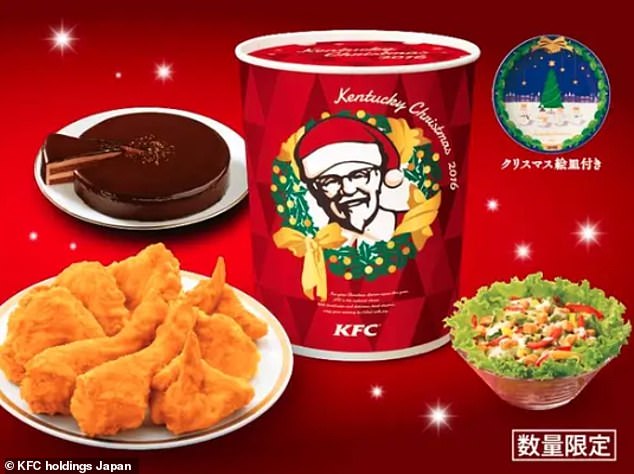 The Christmas ‘barrel’ contains original recipe chicken, a side salad and a chocolate gateaux style cake, as well as a collectable plate

He told Business Insider: ‘I still regret that, but people liked it because it was something good [they thought came] from the U.S. or European countries,’

By 1973, KFC Japan had expanded to 75 locations making it one of the most successful fast food chains in the country.

The idea stuck and in 1974 the first commercial aired was aimed at couples – advertising a bucket of chicken along with a bottle of wine.

Because only one per cent of the population is Christian, the holiday is often marked with non-traditional festivities, and a noticeable lack of religious symbolism.

But for those who do partake, it’s not as simple as walking in and ordering. December is a busy month for KFC in Japan – daily sales at some restaurants during the Christmas period can be 10 times their usual take. Getting the meal often requires ordering it weeks in advance, and those who didn’t will wait in line, sometimes for hours. 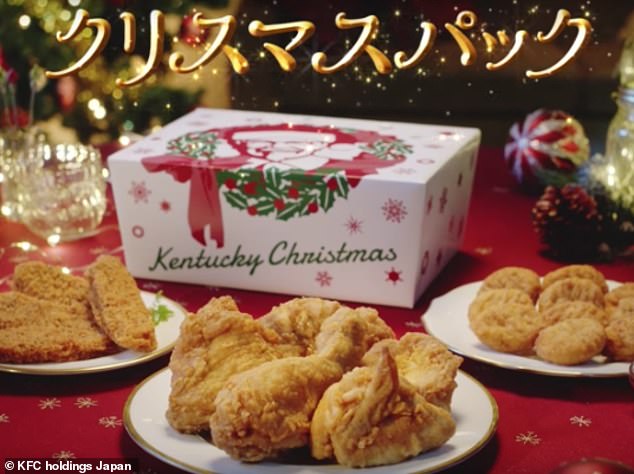 In 2021, social distancing regulations threatened the custom as forming large lines was discouraged, with KFC holdings Japan encouraging customers to order online and pick up their food at a certain time instead of lining up outside the door.

Other companies have cashed in on the fried chicken bonanza, with supermarket chains and convenience stores such as FamilyMart offering their own budget versions of the fried feast.

‘Bemused and cross’ mother wants to know why her son spent £150 on fried chicken, while another spent £2K on take-away