Why it shouldn’t take a tragic star to shake women out of apathy: DR MAX on cervical cancer

Seven women are diagnosed with cervical cancer and two die from it every single day.

All the more shocking is the fact that if all eligible women attended screenings, more than 80 per cent of deaths from cervical cancer would be prevented.

Screening rates are at their lowest level for 20 years, and that means hundreds of women are suffering gruelling treatment and/or dying needlessly.

The situation is so grave that Public Health England and the NHS this week launched the first ever TV campaign to encourage every woman who’s been invited to attend for a smear test, or has missed an appointment, to book now.

I hope it works, but I wonder, too, how it is that women have become so apathetic and complacent about their health; so blasé about screening as to miss appointments that could help stop a deadly disease in its tracks.

Because it’s not just cervical screening. More women than ever before are also missing breast screening appointments.

Just 70 per cent of those invited by the NHS in England to have a mammogram do so. Some 750,000 women each year don’t bother at all — which is a record low.

Almost as alarming is the fact that, as the Mail reported recently, one in six women say they never examine their own breasts for lumps.

Scientific advances have transformed our understanding of disease prevention, diagnosis and treatment of a range of women’s health problems, yet fewer women than ever are taking advantage of them.

Various reasons have been put forward: that women are too ashamed of their bodies because they fear they fall short of the celebrity images they see on social media; or they’re frightened of the discomfort involved; or are worried about seeing a male doctor.

As far as I am concerned, these are just lame excuses.

I worry that women’s medicine is a victim of its own success. Too many now assume that whatever the problem, there will be a pill to pop or an operation available to cure them. How misguided! What we need is another blast of the ‘Jade Goody effect’. When the reality TV star was diagnosed with cervical cancer in 2008, the resulting publicity saw the numbers of young women attending for smears increase by 20 per cent.

And this increase was maintained for several years after her death.

Now, I’m not, for one moment, wishing a terminal diagnosis on another celebrity as a means of getting across a public health message. However, there are means of exploiting popular culture to achieve the same impact — not least through TV soap storylines.

When talking to young doctors, I often tell them that if someone really wants to improve the health of the nation, then they should become a script writer rather than a doctor.

Soaps have a huge role to play in educating people and stimulating debate about disease, mental health and social issues.

Despite all the public health campaigns, the largest ever peak in requests for HIV testing came in January 1991 when the EastEnders character Mark Fowler was diagnosed HIV positive.

It was a similar story when the Queen Vic’s landlady, Peggy Mitchell, was diagnosed with breast cancer in 1996.

I was running a dementia clinic at the time that a storyline on Alzheimer’s involving Mike Baldwin from Coronation Street was developing. Nearly every patient I saw spoke to me about it.

At the root of this is the fact that humans respond to emotions, rather than facts. We are far more likely to take note of something, act or change our behaviour if it is humanised in some way.

It’s all too easy to dismiss them, but soaps are part of the national conversation for millions of us — and they can save lives.

‘Trials’ that fail the fitness test

Amber Rudd, the Work and Pensions Secretary, spoke out this week about the assessment process to access benefits, saying that many disabled people ‘feel put on trial’.

Ms Rudd says she wants to change the ‘language of scroungers and shirkers’ that is all too often associated with the benefits system.

I believe that the assessment process is vital. It’s right that disability benefits are given only to those who really need them. 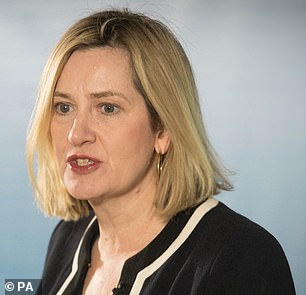 Amber Rudd, the Work and Pensions Secretary, spoke out this week about the assessment process to access benefits, saying that many disabled people ‘feel put on trial’

However, Ms Rudd certainly has a point that the process needs rethinking.

One group routinely failed by the current system are those with mental health problems. Asking them to walk ten paces to demonstrate their mobility, for example, is totally irrelevant. We need better tests that make allowances for those whose symptoms may not be obvious.

I spend a significant amount of my time writing reports to appeal decisions for individuals with profound, enduring mental health problems who have been refused benefits because they are deemed fit to work. But they will never be able to hold down a job, and need state support.

And even for those who win their appeal, some will be called again within a year to be reassessed, despite medical reports making it clear that there has been no change to their symptoms.

This is a waste of resources, and the stress often further compounds their mental health difficulties. So yes, Ms Rudd, we do need change.

Wise up to being happy

It is not exactly breaking news to learn that most people are happier at 70 than they are in middle age, since numerous studies over the years have concluded the same thing.

But what is counter-intuitive about new research by Harvard University is the finding that older people focus less on problems or negative emotions and more readily dismiss them.

This is what children do. They don’t concern themselves with what’s not right, but instead look forward to whatever is coming next. A child’s innocence of the worst the world can do means they are naturally optimistic and positive.

For septuagenarians and beyond, the self-same attitude is based on a vast life experience. Older people know that worrying achieves little and that they will (probably) cope with whatever happens.

Or to put it more eloquently using the old adage: ‘This too shall pass.’ They also feel they may as well enjoy the time that they have left by finding the good in life.

Wouldn’t it be wonderful if we could all adopt this outlook!

I wasn’t surprised to read this week that the fad for low-carbohydrate, high-protein diets is fuelling an epidemic of bowel problems in younger people.

These kinds of diets are very deficient in the fibre needed to maintain a healthy gut flora — the bacteria crucial to our physical and mental health.

Many of the youngsters I see at the Eating Disorder Clinic where I work started out on these kinds of diets — usually after hearing about them on social media.

The simple rule of thumb is that no diet that excludes or dramatically limits food groups in this way can ever be considered healthy.

Many women will feel both worried and confused by news of a study at Helsinki University linking HRT to an increased risk of dementia — especially as just last month concerns were being voiced that too few were prescribed HRT to help them through the menopause.

My advice is not to make any rash decisions based on just one study. We’ve been caught out before. In 2002, a large-scale British research initiative appeared to suggest that HRT increased breast cancer and cardiovascular disease risk. Overnight, doctors stopped prescribing it and women stopped asking for it. Yet this study has since been shown to have ignored the benefits and exaggerated the risks of hormone treatment.

Whether or not HRT is right for an individual woman depends on many factors. One trial rarely provides sufficient information.

Singing In The Rain: 52 Practical Steps To Happiness by Rachel Kelly, is the latest book from the mental health advocate who herself suffered serious depression. I’ve just read it and it’s fantastic for those struggling with depression, anxiety or stress. It presents the small changes — one for each week of the year — we can make to build a new sense of purpose.