What’s worse than empty nest syndrome? The answer, for many put-upon parents, is a nest that’s unexpectedly full again.

And, according to a major new study, when it comes to mental health, everyone’s a loser.

Around a third of young American adults live with their parents, while in Britain the figure is 25 per cent and rising.

For millennials — those born between 1981 and 1996 — it is fast becoming the most common living arrangement, which is extraordinary when you think about it.

Around a third of young American adults live with their parents, while in Britain the figure is 25 per cent and rising (stock image)

The vast majority of this age-group left home for university or to start their working life never expecting to see their old bedroom again except on visits home.

But the ‘boomerang’ generation has been driven back by skyrocketing house prices and rents, and a jobs market flooded with well-educated people competing for fewer well-paid posts.

The psychological ramifications are serious. German researchers, who analysed data on 20,000 young adults, found those who move back to the family home are at increased risk of depression.

That’s certainly my experience in my clinics, where I’ve seen large numbers of men and women in their mid to late 20s — even well into their 30s — still ensconced in the family home and suffering.

They have lost the sense of self they found at university, and feel frustrated and angry at their inability to establish homes of their own as their parents did.

Scientists have identified four specific genetic changes common in people who have killed themselves, plus hundreds of other possible genetic links to investigate.

It’s led to some ill-advised talk about a ‘suicide gene’. Yet unlike other conditions where the presence of a rogue gene or genes all but guarantee that the carrier will exhibit a certain trait, we know that a complex combination of biological, psychological and social factors are involved in depression and suicide.

However, I welcome the findings because one day it could lead to extra support and monitoring for those known to be at greatest risk.

Independence — economic, social and residential — is a hallmark of adulthood. And while they understand things are different, especially after a global recession, it doesn’t take away from their belief that life has stalled. This can trigger a regression to adolescent behaviours such as disregard for house rules, petulance and a sense of entitlement so they treat their home like a hotel.

Researchers at the London School of Economics, meanwhile, found the quality of life for Mum and Dad also deteriorates to the point where it’s as bad as if one of them had developed a disability.

I’ve had people tell me how guilty they feel, because a part of them wants to be rid of their adult offspring. They are also saddened by their children’s frustration.

So how can you minimise the disruption? I think tough love is the answer. There must be some very clear ground rules to stop the inner-teenager resurfacing and you subconsciously reverting to the kind of relationship you had with your child years ago.

Shift your mindset — this isn’t a beloved child but a tenant and he or she must pay rent or at least contribute to household costs. Nothing in life is free — even in the bosom of the family.

And stop parenting. Don’t pry into what they are doing and don’t ask when they’ll be back. Never do their washing or ironing. Never open their mail or go into their rooms (unless invited).

If there is an abundance of mouldy socks posing a biological health hazard, that’s their problem not yours.

Limit family meals to once a week, and in general they should be responsible for buying their own food. Clear out a cupboard in the kitchen for them and allocate a shelf in the fridge.

Treating your child like a lodger might sound grim, but in the long term it affords them the distance they need to maintain their independence — and the boundaries you need to keep your sanity.

Tony the Tiger is not a junk food villain

Kellogg’s has had its appeal upheld against a ban on its cartoon characters. Coco the Monkey and Tony the Tiger were accused of promoting ‘unhealthy’ cereal.

Well, amen to that. The idea that foods are ‘good’ or ‘bad’ goes against everything we should be teaching youngsters about diet.

We want them to learn that there is no such thing as good or bad food, just healthy and unhealthy quantities of certain foods. 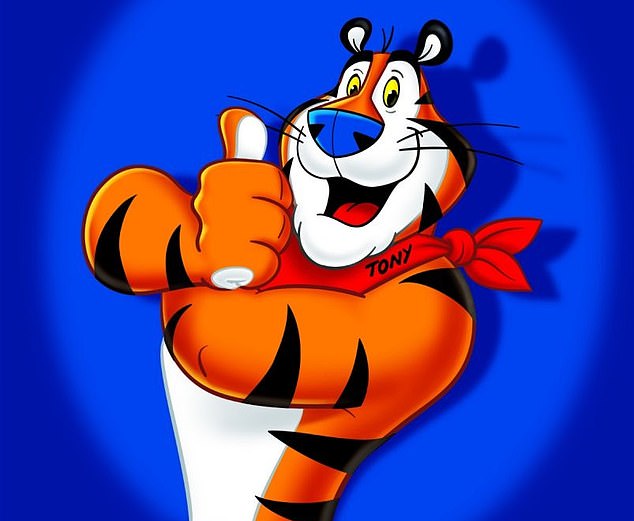 Kellogg’s has had its appeal upheld against a ban on its cartoon characters. Coco the Monkey and Tony the Tiger were accused of promoting ‘unhealthy’ cereal

I read an interesting study recently which concluded that poorer families ate a less balanced diet, not because parents didn’t know about good nutrition, but because they used fast food to compensate for being unable to afford other things — a new bike or clothes etc — for their children. Despite a lack of cash, a meal at KFC or wherever was proof they could still afford the odd treat.

The opposite was true for wealthier families. Children did not want for material things, so saying no to sweets or fast food was a way of demon-strating good parenting.

I WAS appalled this week to read about bogus ‘psychiatrist’ Zholia Alemi, who had worked in the NHS for 22 years without anyone checking her false documents and lack of qualifications.

As a result of the Mail’s reporting of the case, the Department of Health and the General Medical Council — which has direct responsibility for the rigorous monitoring of qualifications — are now checking up to 3,000 foreign doctors to ensure that they do actually possess the qualifications they claim.

A hotline has also been established for patients who know or who fear they were ‘treated’ by Alemi.

The failure to safeguard the public in this case is horrifying and I would urge the organisations concerned to check those who qualified outside Britain and who now practise as psychiatrists first.

Being a psychiatrist is a great privilege, but also a tremendous responsibility. Out of all medical specialists it is psychiatrists who are responsible for detaining people against their will when deemed necessary.

We are entrusted with acting in a patient’s best interest when they are too unwell to make decisions for themselves.

We can enforce treatment and restrict someone’s liberty (it is alleged Alemi wrongly had one patient sectioned).

We also work frequently with the most vulnerable in society. With a job this important, we must ensure that every single one of us has the right training and qualifications as an absolute priority.

Older people are three times more likely to hide mental health problems than younger generations, according to a YouGov survey, with many unaware they may be suffering from depression. That mindset is being blamed on the ‘stiff upper lip’. It’s a shame, say researchers, as evidence shows older people are more likely to respond to treatment.

Yet while suppressing your feelings can be damaging, I don’t think we should be so quick to dismiss the stiff upper lip. Indeed, it can be hugely positive. Instead of people revisiting their grief or trauma, they get on with life. Sometimes soldiering on can build resilience — a quality many younger people seem to lack.

If you’re already feeling a little stressed by the countdown to Christmas, consider dipping into a fantastic book called Mind Over Mood by Dennis Greenberger and Christine A. Padesky.

It’s one of the most successful self-help books ever written and uses cognitive behavioural therapy to challenge unhelpful thoughts and get on top of low mood or anxiety.

I recommend it to any patient who needs some guidance to get things back on track. It would also make a brilliant stocking-filler.