It can’t be easy to wind down after trying to sort out the economy, but Rishi Sunak has found a way – by enjoying a box set.

The Chancellor, 41, has revealed that he’s just like the rest of us and has spent lockdown binge-watching Netflix hits.

‘I spend a lot of time watching Bridgerton,’ he said, praising the Regency drama for its colour-blind casting. He’s also a fan of Emily in Paris, which sees Phil Collins’s daughter Lily playing a young American who relocates to France. But Mr Sunak admits his ‘tastes are probably not quite the same’ as his Cabinet colleagues.

However, he spent his childhood watching typical British fare. ‘We would eat on this picnic mat and watch The A-Team, Baywatch and Blind Date. That was a special part of growing up,’ he told Radio Times.

The Chancellor, 41, has revealed that he’s just like the rest of us and has spent lockdown binge-watching Netflix hits 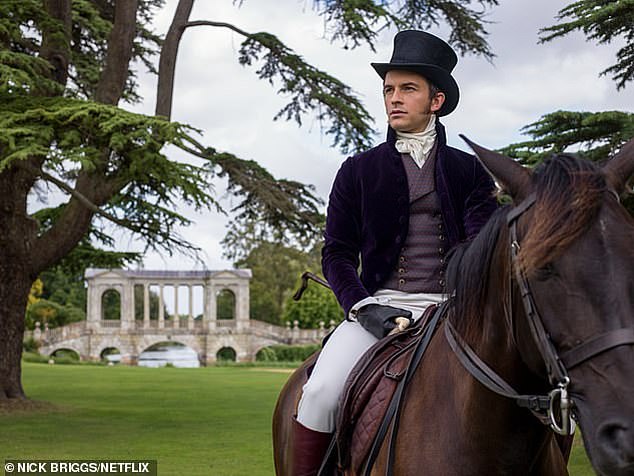 The Chancellor said ‘I spend a lot of time watching Bridgerton,’ praising the Regency drama for its colour-blind casting

He added: ‘After school I watched Byker Grove, Blue Peter, Grange Hill – that was the TV I grew up with.

‘One of my vivid memories is the way you knew Christmas was coming in our house.

‘My dad would come home with a copy of the Radio Times Christmas issue. That was a big day.

‘We would sit there and circle things and figure out what we were going to record if there was another movie on at the same time.’

‘I watched Bollywood movies, but the big, defining TV thing for probably all Indian families was Mahabharat,’ he said.

‘It’s an Indian epic based on the ancient book the Mahabharata, and is nearly 100 episodes. It was a big cultural moment in India, then it came on TV here and took the best part of a year to watch.

‘That was a big deal, a very special thing.’

He added: ‘It’s a rip-roaring story. There is a very famous bit in it, which is important for Hindus, where Lord Krishna and Arjuna, a champion warrior on the goodies’ side, have a big conversation.

‘It’s called the Bhagavad Gita, which is a sacred song, and that conversation contains a lot of advice and Hindu philosophy.

‘My kids are probably a bit young to read the whole thing, but during lockdown my wife and I started reading bits of the Mahabharata to them every Sunday night.

‘They love it. My younger daughter, she’s only eight, but absolutely loves Greek mythology and this is like the Iliad. 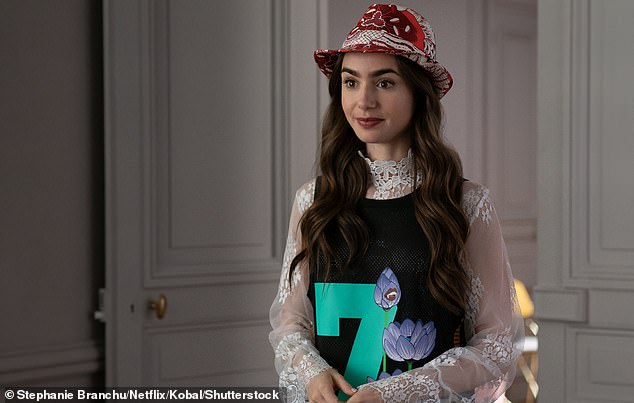 He’s also a fan of Emily in Paris, which sees Phil Collins’s daughter Lily playing a young American who relocates to France

‘It’s got lots of battles, gods and a moral story as well.’ Sunak, lives in Richmond, Yorkshire, with his wife Akshata Murthy and their daughters Krishna and Anoushka, but has a flat on Downing Street.

‘The weekend TV is more Yorkshire and the weekday TV is more Downing Street,’ he said.

He launched the Film and TV Production Restart Scheme last year in a bid to get the industry moving again post-lockdown, but was criticised for ignoring the many freelancers who work in the arts.

‘Not everyone got help in exactly the way they would have liked. I acknowledge that,’ he said.

‘When I look back, could we have done a better job of communicating exactly how that was going to work? Perhaps we could have.’ Sunak admitted that he ‘enormous fan of the BBC’ which ‘probably comes from living in the States for a very long time.’

He said: ‘When you’re abroad, the BBC is your connection with home. I was living thousands of miles away in California, and the BBC was still my homepage. There’s an emotional attachment to it.

‘I think it’s also right that national institutions reflect the values and diversity of people living within a society in its entirety.

‘It’s not about appearance, it’s about values and views as well, and I know that’s something the BBC always strives to do.’