Why the Audi A8 is a bargain used luxury car

Cars lose money. As a general rule that’s true, with depreciation eating up thousands of pounds of the price you paid.

However, it doesn’t have to be the case. Savvy buyers can pick up cars that will not only retain their value, but could be sold for more down the line. Get lucky, and the rise in value will cover the cost of motoring over your ownership period.

In our new Cash Cars series we look for those that fit the bill,  and in this column it’s the classy and luxurious Audi A8.

A brand new Audi A8 will cost you at least £70,000 but a good second hand one of the older era, such as this, can be bought for a few thousand – and will still impress the neighbours

You’ve put it off long enough. It’s time to buy a classy car. A grown-up’s car. Something understated, luxurious and technologically advanced. But also cheap.

Hmm, there’s the rub. Time for Uncle Bob, the prince of parsimony, to ride smoothly to the rescue in Audi’s exotically sculptured A8.

The A8 was launched in 1994, but the seed for it was sown 12 years before that when Audi engineering head Ferdinand Piech signed a deal with a US company for the large-scale supply of aluminium.

Piech’s plan was for Audi to take on and beat the world’s best car – the Mercedes S-Class.

The monolithic Merc was the definition of automotive evolution. The A8 was much more revolutionary.

It would beat the Merc on all the key luxury car parameters of performance, luxury and build quality, and it would add a fourth element never seen before in that class: economy.

It would do all that by being somewhat lighter (but no weaker) than the tank-like steel Mercedes. And that is where Ferdinand’s job lot of aluminium came in.

The A8’s ASF (Audi Space Frame) chassis was the first mass-market monocoque to use this lightweight and corrosion-proof metal. In 1997 the 4WD quattro version became the first all-wheel car to get electronic stability control. Along with the A6 it was the first car to have front and rear side airbags.

The A8 was the nearest thing to a time machine. You got in at one end and got out 500 miles later vowing never to buy another bucketshop airline ticket.

It didn’t quite beat the S-Class, because Mercedes unsportingly failed to halt development on it, but it was certainly at least a match for the other two cars in the class, BMW’s perenially disappointing 7 Series and Jaguar’s ageing XJ. 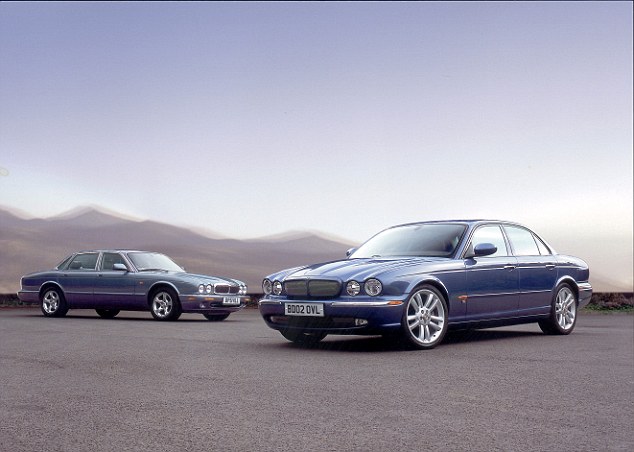 Among the earlier A8’s rivals were the final run of traditionally-shaped Jaguar XJs, before the new-style big Jag was ushered in

Nearly a quarter of a century after the A8 launch, you can still walk into an Audi showroom and drive out in a new one. Trouble is, the cheapest new A8 will cost you £69,995.

But if we follow one of Uncle Bob’s great ­life mottoes – never give any more money to anyone than you absolutely have to – there’s a way round it.

Bob was a latchkey kid. His mum was out a lot, doing who knows what, so his childhood included plenty of hiding from meter readers and TV licence inspectors. Whenever the doorbell rang, he would get on his hands and knees under the living room window and pretend to be out.

As a result, his knees are now in a terrible state, but Bob’s trump card is the knowledge that there is a limitless supply of charity shop trousers to keep him going.

This is Bob’s philosophy when it comes to, well, anything really, but especially cars. Walk past that shiny new £69,995 A8. Buy a shiny old one instead and get £68,500 left over.

Yes, that’s right, you can tap into all of Audi’s engineering sweat for less than £1,500. Albeit, you should be prepared for potentially sizeable bills if your under-£2,000-luxury-saloon goes wrong.

Buy one and your neighbours will think you’ve won the Postcode Lottery. They’ll be knocking on your door for their share of the dosh (remember Bob’s technique if they do) because even a bargain A8 will look like a much more expensive car.

The red cabin ambience at night reeks of money well spent, and you will find yourself laughing uproariously at the outrageousness of it all. 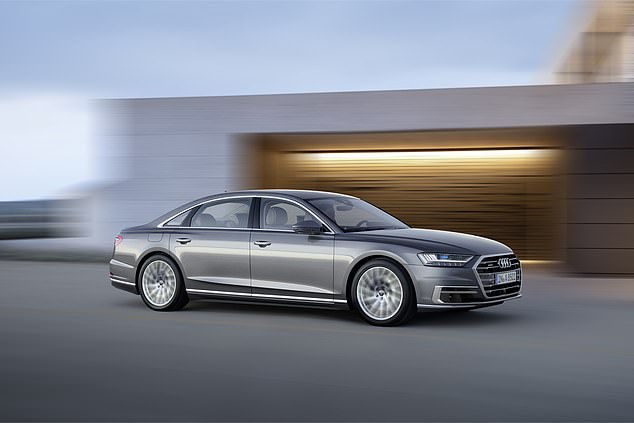 Audi’s styling has been a process of evolution not revolution, so the new A8 pictured here doesn’t look too different from the older cars

So, which A8 should you go for? What you will notice about every early A8 is excellent build quality inside and out. That’s because, in order to properly challenge Mercedes, all the early A8s were as near to hand-built as Audi could manage – and all of them were sold at a loss.

There are no ‘poverty spec’ A8s, as they were luxury cars driven by higher-grade business execs. The only two regular A8 (ie not S8) specs are SE and Sport, and the only major differences with the Sport was bigger alloy wheels that roughened up the ride and different front seats.

Otherwise, differences between used A8s will be down to what option boxes were ticked at purchase. As is the way with company car choices, Sport A8s and the bigger-engined models will tend to have more options.

The 3.7 and 4.2 V8s are brilliant cars, and the four-wheel drive through the twin Torsen diff quattro versions is handy in winter, but if you’re being honest with yourself you probably don’t really need 300bhp or 295lb ft of torque, or the 14mpg you can expect to get from a V8 in town, or when pressing on.

We won’t even mention the twelve-cylinder 6.0 litre W12 driven by Robert de Niro in Ronin and by Jason Statham in Transporter 2 and 3. If you buy one of those it would be handy to have a fracking platform on your land.

W12s rarely come up for less than £7,000 anyway, so they’re way outside Bob’s stingy remit.

Aiming for the simpler and lighter front-wheel drive 2.8 V6 makes the best sense, especially if it’s the later 30-valve 193bhp version. ‘5V’ embossed on the cam covers confirms that. 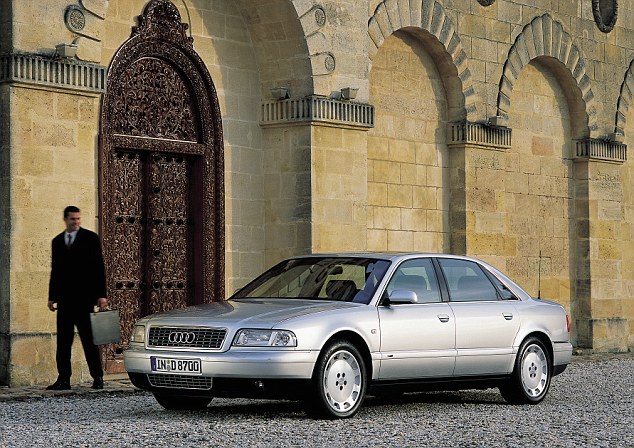 Audi wanted to attract wealthy businessmen to the A8, so it made sure that build quality was excellent and all specifications were good

The 2.8 V6 will cost you less to run and maintain than the V8s. Going for a non-quattro FWD car means you don’t have to change all four tyres at once to protect the transmission.

Even repair costs can be manageable as long as you know one end of a C-spanner from the other. Most of the older cars will have had the known glitches sorted by now, so running an early A8 should come down to consumables and the odd bigger item, just as with any car.

Mechanically, it would be wise to change the transmission fluid and filter every 40,000 miles, but the main issues you’re likely to face will be electrical. MMI info screens are known for losing pixels. The electric boot latch can go on the blink, and so can the steering-angle sensor, which turns off the ABS – not ideal.

The A8 is known for a mysterious ‘dash clicking’ thing that nobody seems to know the answer to.

Some say it’s to do with the air recycling system. That would make sense as some A8s have also exhibited poor demisting and blocked air evaporator drains.

If the front carpets are wet, you’ll need to sort that really quickly as the important ECUs that live underneath those carpets don’t like getting wet.

If you buy direct from Audi, some parts will be horrifically expensive. Bob had to be fanned hard with a copy of the Racing Post after hearing that a pal had been quoted £6,500 for a power steering pump.

Thing is though, if you’re comfortable roaming around the internet, reconditioned PAS pumps can be found for as little as £50. Most bits are available secondhand and the consumable parts are fairly cheap. Because these are ‘quality’ cars, there’s a strong following out there along with a lot of free advice and good-value specialist expertise.

On that value point, it’s hard to argue against an old A8 for the same money as a week in Benidorm.

And there’s a nice clincher. As and when your A8 fails its MOT, get your tools out, buy a sheet of sticky labels and strip it for parts. Bob reckons you can easily clear £3,000 on ebay for things like the drivetrain (engine/gearbox/transfer box), the exhaust and cats, ECUs, lights, seats, trim pieces and clocks.

And when everything’s been taken off, your local scrappy will give you at least £200 for that aluminium bodyshell. Job’s a good ‘un.

Audi A8: Bob’s three to think on 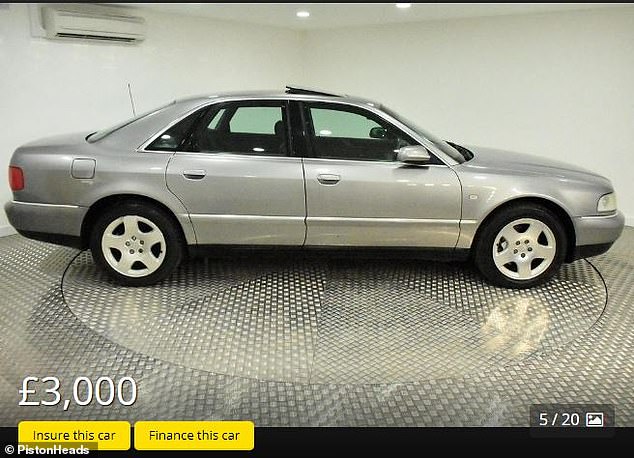 This 2.8 litre quattro Audi A8 is for sale for £3,000 through a dealer on Pistonheads

Good early 2.8s are getting hard to find now, especially the non-quattro front-wheel drive models. That could be because owners are hanging on to them in the hope and not unreasonable expectation that they may well rise in value as people realise just what an amazing car the first A8 was. In the absence of any FWD 2.8s on sale, here’s a 30-valve quattro 2.8 with carefully accumulated mileage and no alarm bells on the usefully long MOT (to Oct 2019). Remedial work to sort out leaky differentials and worn suspension was carried out not that long ago, so with luck you won’t be facing any surprise bills in those areas. £3,000 to you squire. 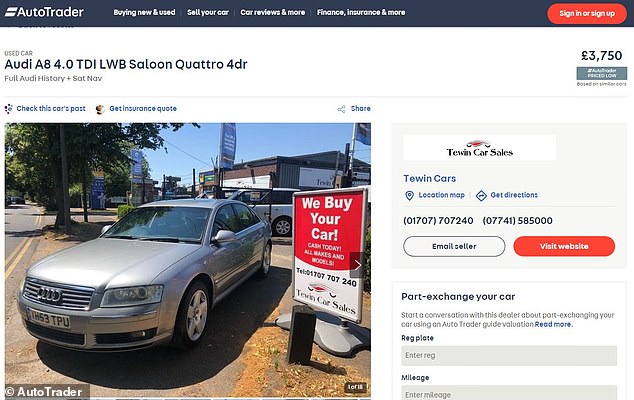 This  4.0 litre diesel V8 will provide a mix of power and better economy and is on sale through a dealer on AutoTrader

For more than adequate performance along with reasonable economy, you can’t go wrong with a big diesel. Well, you can, but who wouldn’t be tempted by a 4.0-litre V8 diesel A8 with 275hp and a humungous 650Nm of torque at a growly 1,800rpm? This 2003 specimen has done a shade over 94,000 miles and had its last service at 90,000 miles. The next MOT isn’t due until September 2019 and it has a full dealership history, plus it’s the extremely roomy long wheelbase model. This A8 is a bit pricier than the original 4.0 litre diesel we found at £2,990 but that had done 130,000 miles and was sold before we could publish, demonstrating that these cars are in demand. 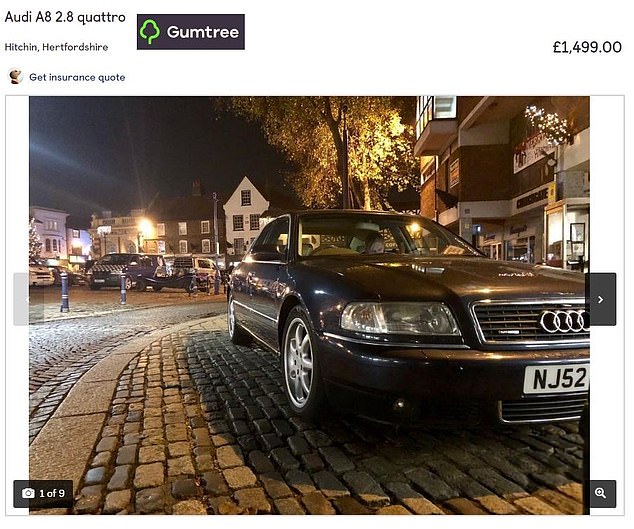 It’s the cheapest A8 that our search could find, a 2.8 litre 30V quattro for private sale at £1,499 on Gumtree in Hitchin, Herts

Here’s one for all you gamblers out there: the cheapest A8 we found in our search, an 80,000-mile 2002-vintage 2.8 quattro with the desirable 30V engine and all the usual toys for an incredible sounding £1,499. The MOT history shows that the low mileage kind of stacks up. We say ‘kind of’ because, if we were thinking of buying it, we’d be investigating a bit more would be why, after it failed its MOT in April 2018 on a longish list of suspension problems, it was then put in for a second MOT in May without any of the work having been done (based on it failing again for all the same reasons). What’s important is that it passed OK in November with no advisories. Could be a winner, if it’s pukka.