Why the UK should tackled Covid-19 like CUBA did

Britain could have avoided thousands of coronavirus deaths in the first wave of the crisis if it took Cuba’s approach, a public health expert has claimed.

Fewer than 100 people have been killed by Covid-19 on the Caribbean archipelago, which is famed for being a communist state.

An expert has said the country’s success has been down to its door-to-door screening of every home — known as ‘shoe-leather’ epidemiology.

Thousands of doctors, nurses and students carried out testing and tracing on foot, quarantining all suspected cases in state-run isolation centres for 14 days.

Professor John Ashton, an ex-regional director of public health in England, said Cuba’s efforts against Covid-19 had been ‘outstanding’.

And he praised the nation — home to 11million people — for having a system ‘grounded in public health’, investing in local workers.

In comparison, the UK works from a centralised system run by Public Health England which gives orders from the top down and which Professor Ashton said is ‘flawed’.

Professor Ashton claims that the UK’s ‘dramatic failure’ could have been averted by adopting the same methods, which could have saved up to 30,000 lives.

Only Leicester in the East Midlands has used the door-knocking strategy in response to being the worst hit Covid-19 spot in the UK and under a ‘local lockdown’.

Britain could have avoided thousands of coronavirus deaths in the first wave of the crisis — if it took Cuba’s approach (pictured, Cuban woman wearing a mask, July 1) 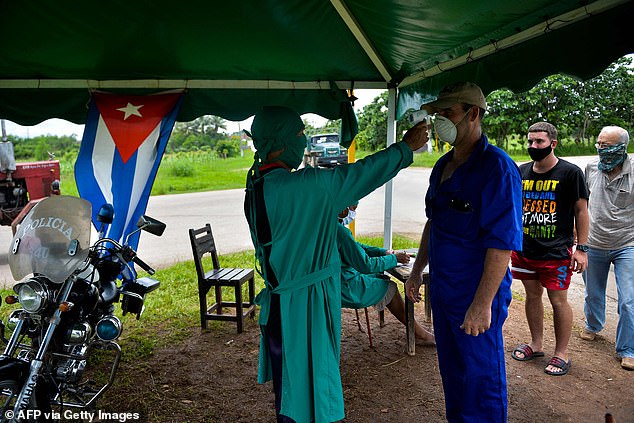 Thousands of doctors, nurses and students carried out testing and tracing on-foot, quarantining all suspected cases in state-run isolation centres for 14 days (pictured, a health worker in Cuba on June 18)

Cuba has only recorded 87 coronavirus deaths so far, according to the World Health Organization (WHO).

In comparison, the British government has reported 44,830 laboratory-confirmed fatalities while national statistical bodies have reported 55,706 based on both suspected and confirmed cases of Covid-19.

Professor John Ashton told MailOnline: ‘Cuba has had hardly any deaths at all.

‘For a comparable sized country like Germany, we’ve had twice as many deaths. I think it’s reasonable to say 30,000 deaths could have been avoided based on the failure to get a grip, which was largely to do with testing.’

DOOR TO DOOR TESTING – IS THE UK CAPABLE?

Shoe leather epidemiology was actually first invented in Soho, London, in the 1850s.

It was proved worthy to control a cholera epidemic because local health officials were able to trace cases to drinking water from a specific street pump.

The practice was used for generations until invention of the ‘flawed agency’ PHE in 2013, according to Professor John Ashton a former regional director of public health in the north west of England.

He told MailOnline sources to control the Covid-19 crisis were available at a local level to help control the spread of the disease, but these were ‘neglected’.

‘We should have made more use of primary care, local government and volunteers,’ he said. ‘Almost everyone is registered with a GP. For first point of contact, it might have been useful to use that.

‘We failed to make use of the environmental health officers who do this kind of work in response food poisoning outbreaks, for example.

‘The third arm is volunteers, the 750,000 who responded to the NHS. The volunteers could have been enlisted to help out how they have in China or Hong kong, taking temperatures outside schools and supermarkets.’

Professor Ashton said local public health directors are used to handling highly sensitive data. For example, professionals use contact tracing to warn people they have an STI after asking the infected person for details of their sexual partners.

For example, Sir Peter Soulsby, the mayor of Leicester, told the BBC local health officials had been trying to get ‘information about the level of testing in the city and the results of that testing in the city’ from the Government for weeks. But a lack of knowledge led to the sudden lockdown of Leicester on June 30.

A door-to-door coronavirus testing scheme has since been launched in Leicester.

It’s the first time testing like this has been implemented during the Covid-19 pandemic – and the NHS Test and Trace chief Baroness Dido Harding, said it is where testing is ‘needed most’.

Sir Peter, who has been vocal about his dismal at the communication between PHE and local experts, said increased testing was the only way to reduce the infection rate in the city and get it back on its feet.

NHS teams and volunteers are knocking on doors, dropping off home test kits for people even if they do not have symptoms, and picking them up later in the day.

Writing in the Journal of the Royal Society of Medicine, Professor Ashton, based in Liverpool, praised Cuba for reacting quickly to the emergence of the new coronavirus in Wuhan, China, in December 2019.

The country’s communist government drew up plans before the WHO had declared a pandemic.

Throughout February, medical facilities across the nation were reorganised and staff trained to control the spread of the SARS-CoV-2 virus.

Then, when Cuba’s first three cases were discovered on March 11 — three tourists from Italy — the plans were put in immediate action.

Tens of thousands of healthcare workers started screening every house resident on foot, Professor Ashton said. It is not clear if every single citizen has been tested.

Seeking out cases quickly helped prevent the outbreak from spiralling out of control – unlike what happened in Europe — with no more than 100 cases detected on the worst day.

Cuba went into lockdown on March 20, when it reported five new cases in one day, and shut its borders on April 1, despite it being a huge holiday destination.

In comparison, the UK kept its borders open from March to June. It only advised against non-essential travel and took a more relaxed approach to screenings at airports.

Professor Ashton said: ‘Cuba has long been renowned for its ability to turn in world beating health statistics while continuing to struggle economically.

‘With a health system grounded in public health and primary care, the country invests heavily in producing health workers who are primarily trained to work in the community. Their efforts with Covid-19 have been outstanding.’

The difference between Cuba and the UK is that the latter’s handling of the crisis has fallen into the hands of top health chiefs, rather than local ones, Professor Ashton said.

Public Health England (PHE), a branch of the Department of Health, was at the forefront of testing when cases of Covid-19 arrived on British soil.

But it stopped doing this on 12 March because the coronavirus had become too widespread to control. Instead, PHE shifted testing to prioritise the sickest patients leaving millions with mild symptoms untested.

When it finally ramped up testing to reach all people with symptoms on May 18, it involved private companies Deloitte and Serco setting up testing sites – which Professor Ashton said was a ‘complete failure’.

He told MailOnline: ‘The local public health level has been neglected. I think we’ve missed an opportunity because we should have made more use of primary care, local government and volunteers.

‘Almost everyone is registered with a GP. For first point of contact, it might have been useful to use that.

‘We failed to make use of the environmental health officers who do this kind of work in response food poisoning outbreaks, for example.

‘The third arm is volunteers, the 750,000 who responded to the NHS. The volunteers could have been enlisted to help out how they have in China or Hong kong, taking temperatures outside schools and supermarkets.

‘Instead what we did was a very top-down, London-centric approach.’ 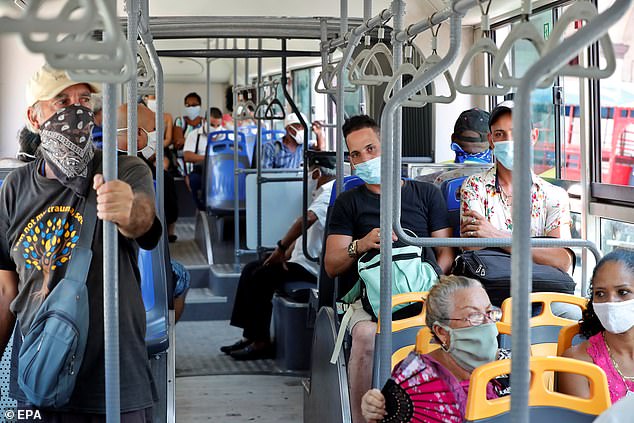 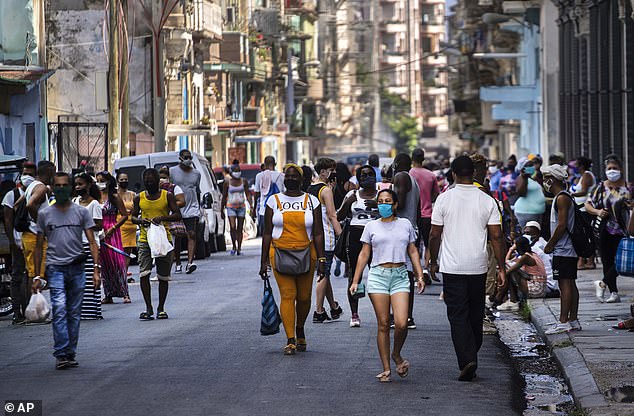 Cuba went into lockdown on March 20, when it reported five new cases in one day, and shut its borders four days later, despite its huge economic dependence on tourists. Pictured: People in the city of Havana, July 3

Professor Ashton, former president of the Faculty of Public Health, said the strengths of a local skilled workforce was ‘run down’ by the top dogs at PHE.

‘The inability to undertake large-scale testing for the coronavirus and to follow through with contact tracing, triaging, isolation and treatment followed as light follows day,’ he wrote.

He said Number 10’s approach was ‘no substitute for hands-on experience with local knowledge’.

Other experts have lambasted the government for only recently becoming involved with local councils in the contact tracing strategy.

Contact tracing is a critical part of the effort to contain Covid-19 and aims to keep on top of flare ups at a local scale.

Thousands of contact tracers have been hired to phone infected cases, identify their contacts, and get in touch to advise them to self-isolate.

Information is then passed to government-paid contact tracing teams working at a local level to control outbreaks.

‘Local government has much expertise to bring to contact tracing and this should have been recognized much earlier.

‘The most effective work now in responding to local outbreaks is being done by public health teams working for councils and for Public Health England. This is where resources should be concentrated – not in telephone based contact tracing undertaken by people working remotely.’

Shoe leather epidemiology was first used in Soho, London, in the 1850s to control a cholera epidemic because local health officials were able to trace cases to drinking water from a specific street pump.

The practice was used for generations until invention of the ‘flawed agency’ PHE in 2013, Professor Ashton claimed.

In response, PHE said: ‘The roll-out of PHE’s COVID-19 diagnostic PCR test across the network of PHE and NHS laboratories was the fastest deployment of a novel test in recent history, across over 40 NHS labs by the end of March.

Lord Blunkett said not enough trust or funding has been put in local authorities for years and, as a result, relationships between government and the public were weak when they needed to be strong during the pandemic.

He said councils were suddenly expected to step up to the plate when the coronavirus hit, after years of cuts and austerity.

But they didn’t have the capacity to rapidly set up test and trace systems, he claimed. 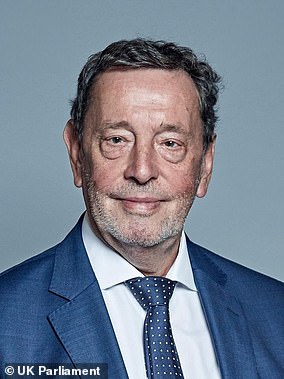 Writing in the journal Public Money & Management, Lord Blunkett said: ‘They (central government) neither understood nor trusted local government, whilst subliminally realizing that their own actions had actually undermined the ability to respond.’

In addition, the former Labour minister said the pool of experts making up the Scientific Advisory Group for Emergencies (SAGE) was too narrow in ‘the kind of expertise available and the institutions, departments and background from which they came from was a mistake.’

He criticised the fact that so many top Government officials come from private schools and said more diversity was needed in power, and that more decision-making should be given to local authorities with the help of outside experts who aren’t afraid to criticise the Government.

Lord Blunkett added: ‘It is crucial to have those who have not only an entirely different discipline at their fingertips, but also reflecting that crucial life experience that comes from alternative economic, social and cultural backgrounds.

‘The loudest and the most pushy are not necessarily the best advisers.

‘Often knowing each other, looking like each other, living the same lifestyles together and ‘thinking the same’, led not to the brilliant, incisive intellectual rigour needed, but to disaster.’