China’s decision to ban imports of recycled material from wealthy countries has brought the American recycling industry to the point of an existential crisis.

Recycling has now become so expensive that more cities in the United States are sending recyclables to waste incinerators, where they are burned along with non-recyclable trash to generate electricity, according to Gizmodo.

In years past, cities would collect recyclables, sort them, and clean them so that they could be sold as commodities to manufacturers.

But when China announced last year that it would stop taking in American recycled materials to combat pollution, the recycling industry could not find a new buyer.

That sent prices of these materials plunging. If mixed paper once sold for $100 a ton, it dropped to about $3 a ton.

China not only banned 24 foreign materials, including mixed paper and post-consumer plastic, but it also put a strict 0.5 per cent contamination thresholds on products it would be willing to accept, such as corrugated cardboard.

The average contamination rate of American recyclables is around 25 per cent, which forces facilities to spend more money in sifting through materials to make sure they are clean enough to export.

The skyrocketing costs of recycling has now forced cities to either cut down on the list of items it is willing to accept for recycling, or sending the recyclables to landfills or incinerators.

In 2012, Philadelphia was selling its recyclables to processors at $67 a ton.

Last year, however, it was paying the contractor, Republic Services, $20 a ton to take its recyclables.

In September, the city and the contractor began negotiations on a new contract.

The contractor asked the city to pay $170 a ton to continue recycling.

As a result, the city decided it would sell half its recyclables to Waste Management for $78 a ton, and send the other half to Covanta, a company that incinerates trash to create energy.

For months, a major recycling facility for the greater Baltimore-Washington area has been facing a big problem: it has to pay to get rid of huge amounts of paper and plastic it would normally sell to China.

Beijing is no longer buying, claiming the recycled materials are ‘contaminated.’ 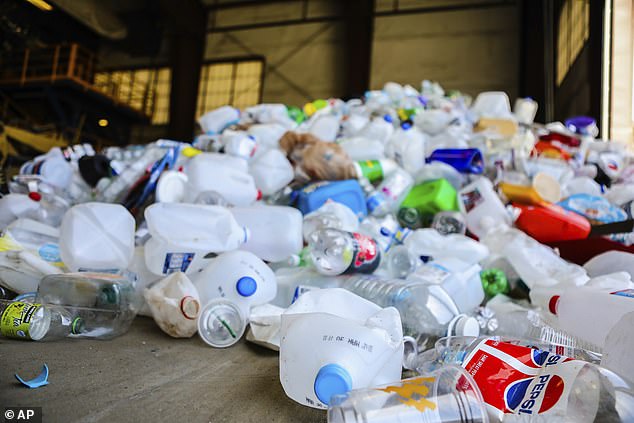 For sure, the 900 tons of trash dumped at all hours of the day and night, five days a week, on the conveyor belts at the plant in Elkridge, Maryland – an hour’s drive from the U.S. capital – are not clean.

Amid the nerve-shattering din and clouds of brown dust, dozens of workers in gloves and masks – most of them women – nimbly pluck a diverse array of objects from the piles that could count as ‘contaminants.’

That could be anything from clothes to cables to tree branches to the bane of all recyclers: plastic bags, which are not supposed to go in recycling bins because they snarl up the machinery.

‘We’ve had to slow our machinery, and hire more people’ to clean up the waste, says Michael Taylor, the head of recycling operations for Waste Management, the company that runs the plant.

At the end of the sorting line is the end product – huge bales of compacted waste containing paper, cardboard or plastics.

These have been bought up for decades by businesses, most of them based in China, which clean them up, crush them and transform them into raw materials for industrial plants.

Last year, China bought up more than half of the scrap materials exported by the United States.

Globally, since 1992, 72 percent of plastic waste has ended up in China and Hong Kong, according to a study in the journal Science Advances.

But since January, China has closed its borders to most paper and plastic waste in line with a new environmental policy pushed by Beijing, which no longer wants to be the world’s trash can, or even its recycle bin.