Why this urine sample is GREEN

This image provoked much discussion when posted on Figure 1, a website where doctors around the world share medical images and canvass their colleagues’ opinions

Experts tell us the colour of healthy urine is pale straw — so the green hue of the urine in this patient’s catheter bag is certainly different.

Indeed, this image provoked much discussion when posted on Figure 1, a website where doctors around the world share medical images and canvass their colleagues’ opinions.

But there are a host of reasons why urine might be green; some benign, others more worrying.

For instance, asparagus may have this effect in some people who lack the genes to break down the pigments which give the vegetable its colour, says Richard Viney, a consultant urological surgeon at the Queen Elizabeth Hospital in Birmingham and The Bladder Clinic. ‘Other explanations include consumption of food dyes or the use of drugs containing chemical compounds called phenols.’

These medicines include cimetidine, often used to treat reflux; the antidepressant amitriptyline; and an antihistamine called promethazine.

Phenols are broken down into a green compound that is excreted into urine.

Another explanation could be a urinary tract infection caused by Pseudomonas bacteria.

However, the urine in this picture is in a catheter bag, which suggests other, more serious causes. Catheter bags are typically used in intensive care or after surgery to help monitor the output of urine. 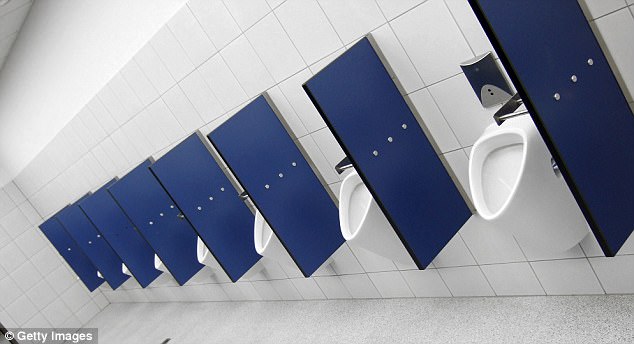 There are a host of reasons why urine might be green; some benign, others more worrying

‘There is a dye called methylene blue, which may be used during surgery to make certain body fluids and tissues easier to see,’ says Mr Viney. This dye can also be used as an intravenous drug in seriously ill cardiac patients — as was the case here.

‘In this situation, the patient would be in shock following surgery, which means their blood pressure is too low and their organs start to fail,’ says Mr Viney.

‘This is often caused by over-dilation of blood vessels in response to infection.

Indeed, the registered nurse who posted this image explained that the patient had been given methylene blue.

Due to its blue colour — and urine being yellow — the result was green urine.