Why white noise apps won’t help you to sleep: Method may cause more harm than good, study suggests

Playing white noise at night to soothe a restless baby may cause more harm than good by disrupting their sleep cycle, study warns

By Courtney Bartlett For The Daily Mail

Whether it’s the hum of a fan or synthetic sounds from a smartphone, parents often turn to so-called ‘white noise’ to help a restless child fall asleep.

But a review of 38 different studies found it may cause more harm than good by causing significant disruption to the natural cycle of sleep.

Apps making white noise are popular — the iPhone’s Bedtime Fan app has more than three million downloads while the Android White Noise Generator has over a million.

White noise is alleged to aid sleep as it helps even out the difference between ambient noise and any disruptions — such as traffic, or a dog barking.

However, the NHS recommended in a blog posts that parents do not try to shield their child from sounds at night, as so that they become accustomed to the noise.

A 2014 study similarly warned that white noise machines often exceed the recommended noise limits for children — and can lead to hearing/speech problems.

Based on those findings, doctors recommended that white noise machines be kept at least 6.5 feet (two metres) from children’s cribs if they are used.

Whether it’s the hum of a fan or synthetic sounds from a smartphone, parents often turn to so-called ‘white noise’ to help a restless child fall asleep. But a review of 38 different studies found it may cause more harm than good by significantly disrupting the natural cycle of sleep.

Mathias Basner, a professor of psychiatry at the University of Pennsylvania School of Medicine in Philadelphia, told the Guardian: ‘If these apps or devices could only do good things, I wouldn’t really care.

‘But because there may be negative consequences, I would just be careful.’

‘I wouldn’t broadly recommend them, because there is no evidence that they are actually working,’ he added.

The term ‘white noise’ technically refers to a repetitive hissing at different frequencies, but it’s also used as a shorthand for calming sounds which drown out background noise.

Professor Christian Cajochen, of the Centre for Chronobiology at the University of Basel in Switzerland, said: ‘Any acoustic stimulus being continuous or not has the potential to interrupt the sleep process.’

Using a fan is the most common option, although modern apps allow an insomniac to pick calming recordings such as crashing waves or the sounds of nature.

One theory to its purported effectiveness is that it becomes a self-fulfilling prophecy: the sound of a fan helps you sleep because you turn it on at bedtime.

‘Even the idea is a very limited one conceptually, sleep medicine expert Colin Espie of the University of Oxford told the Guardian.

‘The main concern to overcome in poor sleep is the busy or racing mind. People can’t switch off mentally,’ he explained.

‘White noise is just like any other monotonous stimulation, which has been tried many times in many ways over decades, and the evidence [for its efficacy] is poor.’ 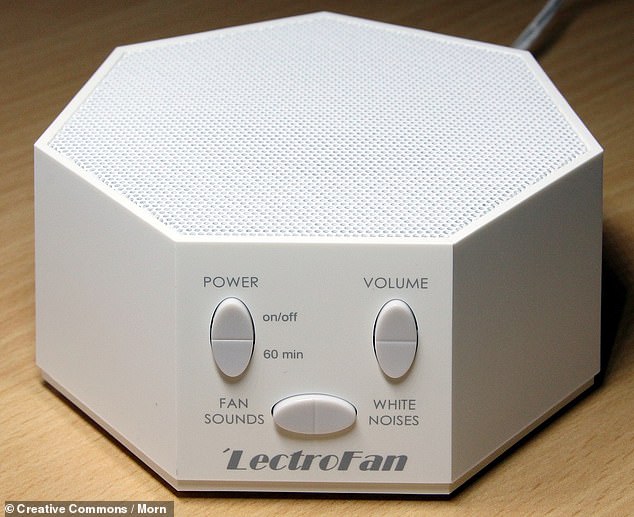 Psychiatrist Mathias Basner of the University of Pennsylvania told the Guardian: ‘If these apps or devices could only do good things, I wouldn’t really care. But because there may be negative consequences, I would just be careful.’ Pictured: a white noise machine

Dr Basner worries the human auditory system does not switch off overnight – although this is yet to be put to the test.

‘Whenever we’re exposed to sounds and noise, the inner ear is translating that into nerve signals that are then interpreted by the brain,’ he said.

‘It is an active process, which generates metabolites, some of which have been shown to be harmful to the inner ear.

‘You probably want to have a period where the auditory system can wind down, regenerate and prepare for the next wake period.’

‘Additional research with objective sleep measures and detailed descriptions of noise exposure is needed before promoting continuous noise as a sleep aid, especially since it may also negatively affect sleep,’ the team concluded.

The full findings of the study were published in the journal Sleep Medicine Reviews.