Having a terrible hangover the morning after a big night is not unusual – but experts say some symptoms may actually be a sign that you’re allergic to alcohol.

Health experts have explained how an upset stomach or red rash may be symptoms of a potential alcohol allergy.

Swelling of the lips and face or breathing difficulties would also suggest you are having an allergic reaction.

However, some side effects experienced could be a sign that you’re just sensitive to particular ingredients within alcohol – including sulphites and histamine – rather than having an actual allergy.

Experts advise seeing a doctor if you are concerned about an allergy, but added there were ‘many possible reasons that alcohol may cause unpleasant symptoms’.

Health experts have revealed how some symptoms of a hangover, such as an upset stomach, might actually be a sign you’re allergic to alcohol

Speaking to Cosmopolitan, Holly Shaw, from Allergy UK, explained: ‘Symptoms of an allergic reaction often mimic symptoms of other conditions and will affect people in different ways.

‘Allergic symptoms may affect the skin, breathing and circulatory system. They may also be accompanied by a red rash, swelling to the eyes, lips, face, breathing difficulties, stomach upset, feeling dizzy or faint due to low blood pressure.’

She added: ‘Your doctor will decide if allergy testing is needed or if the problem is non-allergic’.

Holly added that the common side effects of alcohol may also be masking allergic reactions to particular foods you have eaten the previous evening. 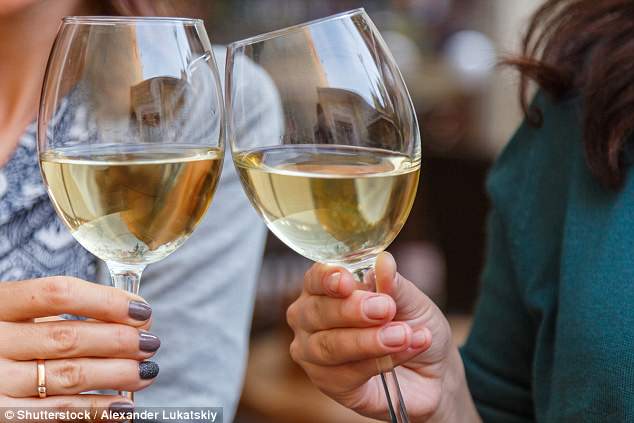 However, side effects experienced could also be a sign that you’re just sensitive to particular ingredients within alcohol – including sulphites and histamine

As alcohol is a diuretic, it causes dehydration, which in turn leads to symptoms such as headache, dry mouth, reduced concentration and irritability.

Meanwhile, blood-sugar levels drop because the body produces too much insulin in response to the high sugar content of alcohol.

This contributes to a throbbing head, as well as driving the rampant hunger that many drinkers experience.

Alcohol also irritates the stomach and disrupts sleep, causing nausea and exhaustion the next day.

However, she said that becoming ‘red and flushed’ while drinking alcohol was not a sign of an allergic reaction.

It comes after dermatologists revealed how alcohol can affect your skin for weeks after a drinking session.

Dr Natasha Cook previously told FEMAIL: ‘Alcohol creates a dehydrating effect on the skin and body and suppresses the production of a hormone known as vasopressin, which helps you reabsorb water.’

She added:  ‘So you’re peeing more water and you can’t retain water, leaving you with dehydrated and tired skin.’

Dr Cook also explained how alcohol also increases the opening of blood vessels in the skin, forcing them to burst if they become overdilated.

This can cause increased redness in the skin and contributes to rosacea.