Why you’ve been cooking your vegetables WRONG

Young Masterchef judge Poppy O’Toole has spent years honing her skills and perfecting some of the UK’s favourite foods – and has now paired with MailOnline to share the secrets behind turning boring greens into showstoppers of their own.

As well as making it her life’s mission to perfect the art of the humble roast potato, the Michelin-trained chef and food influencer regularly shares her tips for all sorts of foods with her millions of followers to help them spice up their weekend routines.

The 28-year-old has an impressive 3.5million followers on her TikTok channel, where she shares her favourite food hacks – most recently running a ’12 days of Christmas potatoes’ series.

She may be the self-appointed Queen of potatoes, but she knows the other elements of a classic Sunday roast are just as important – starting with one of the least popular elements: vegetables. 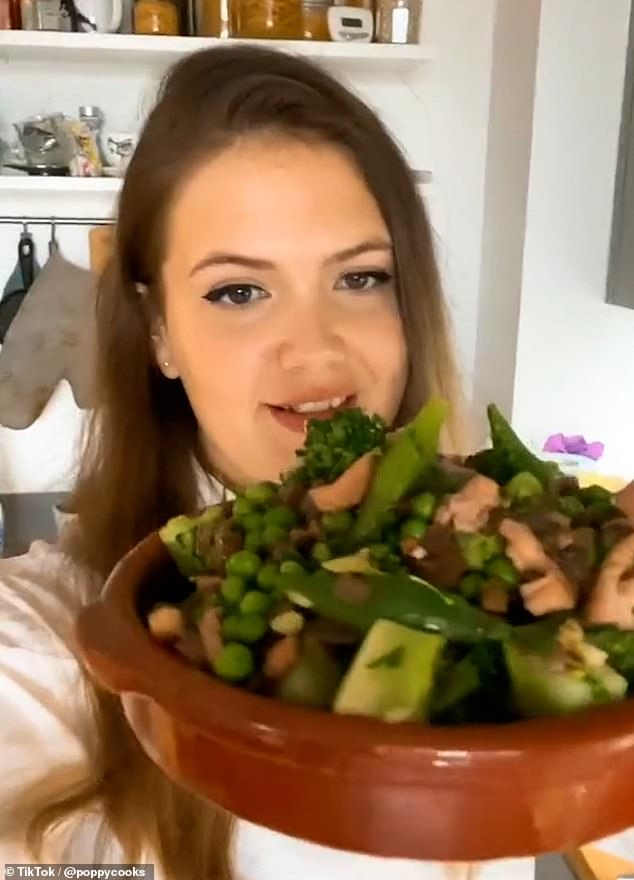 The chef and influencer has 3.5million followers on her TikTok channel, where she shares her favourite food hacks such as how to up your Sunday roast game 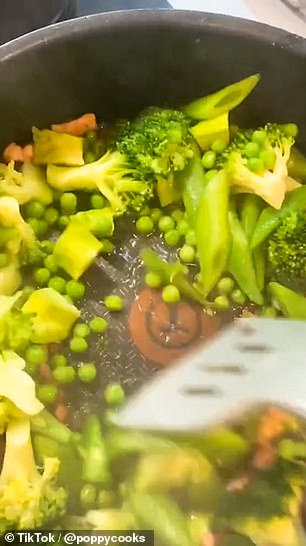 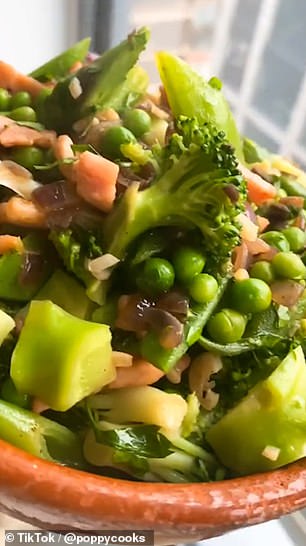 The influencer began working in high-end restaurants aged just 18, landing an apprenticeship at Purnell’s in Birmingham.

She soon moved to London to pursue her career, but lost her job when the pandemic hit in March 2020.

It was then she began making TikTok videos and dedicating time to her Instagram following, reaching 1.5million TikTok followers within 12 months.

She first went viral with a video explaining how to make McDonald’s-style hash browns.

Speaking to MailOnline, she revealed a range of ingredients to add to greens to spice them up for any occasion – from a family roast to an elegant dinner party: these hacks are guaranteed to get guests talking.

Roast the veg – ‘always better than boiling or steaming’ 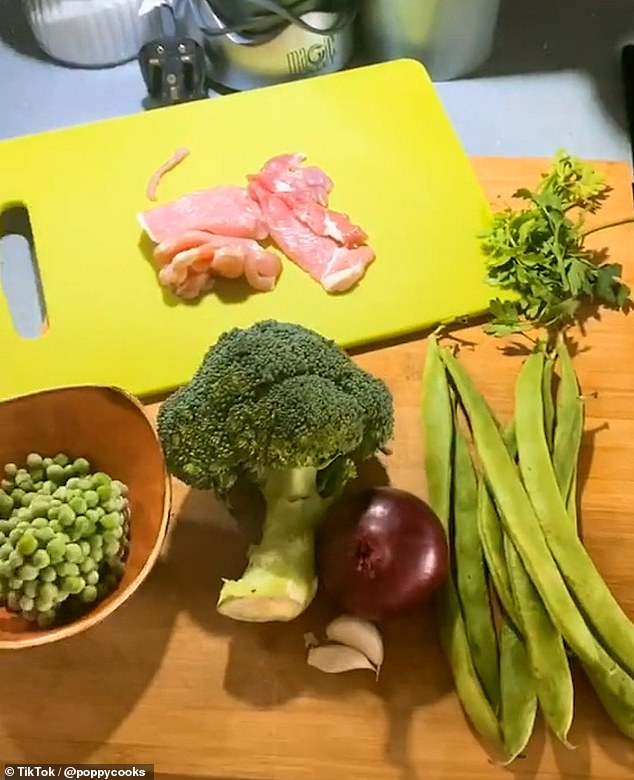 On simple way to jazz up vegetables is to roast them, instead of simply boiling or steaming.

Poppy says: ‘A roasted vegetable’s best friend is honey. I don’t think you can beat honey-roasted parsnips, or carrots.

‘I’d forget the boiling and go straight into the oven with dashings of honey for the perfect accompaniment for any roast.’

‘Compound’ seasonings to take veg ‘to the next level’ 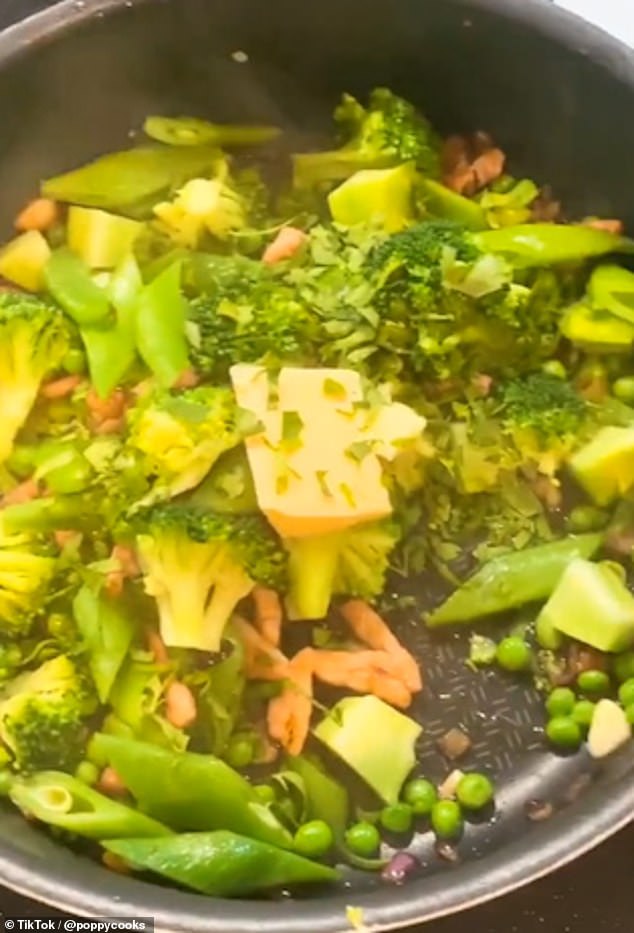 The influencer also recommends using ‘compound’ butter, which takes care of seasonings to elevate simple components of any meal such as peas, beans and carrots

The influencer also recommends using ‘compound’ butter, which takes care of seasonings to elevate simple components of any meal such as peas, beans and carrots.

She told MailOnline: ‘Another best friend of the veg is butter, but you can level this up by adding a ‘compound’ butter to your veg.

‘This is just pre-mixing your butter with things like garlic, or soft herbs like basil, parsley or rosemary, and then adding this butter to your beans, carrots, or peas after cooking. A delicious topper to take them to the next level.’ 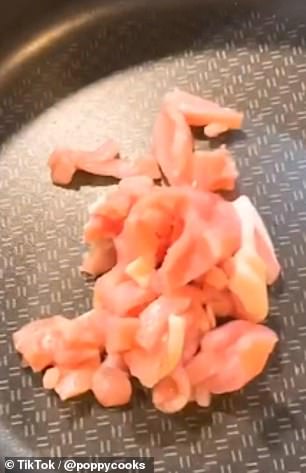 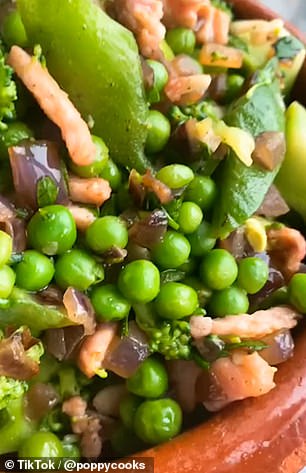 The chef recommends ‘pimping up’ ordinary peas: ‘I love to pimp these up with a bit of bacon (left) and… controversially… crumbled feta for a pea with an edge’

It might feel a bit like cheating, but a well-placed add every now and again never hurt anyone.

Most people are familiar with adding bacon to sprouts every Christmas, but Poppy’s version involves a vegetable that is available all year round.

The chef recommends ‘pimping up’ ordinary peas: ‘I love to pimp these up with a bit of bacon and… controversially… crumbled feta for a pea with an edge.

‘Just sautee off your bacon, add your boiled peas, serve up and crumble bits of feta throughout.

Poppy’s final plug for the humble vegetable is not one which is traditionally served up on the Sunday dinner table.

‘I need to give some love to kale.

‘I think it got lost as a vegetable in health fads and diet crazes, but the humble kale deserves so much more than your January detox smoothie,’ Poppy says.

She continued: ‘I’ve found the airfryer is the best way to crisp it up. With a bit of salt, pepper, and the good bit of crisp you can get, it makes a delicious added texture to your roast dinner.

‘A bit like when you add crispy seaweed to your plate of Chinese takeaway.

In 2021, Poppy released her own recipe book, Poppy Cooks: The Food You Need, in which she has a whole chapter on how to perfect a Sunday roast.