A grieving widow whose husband died from ‘the ravages of the COVID-19 virus’ has hit out at President Trump and ‘the many ignorant, self centered and selfish people’ who refuse to wear masks in a gut-wrenching obituary, blaming them all for the great-grandfather’s ‘needless’ death.

David W Nagy, from Jefferson, Texas, passed away on July 22 at the age of 79, leaving behind his ‘inconsolable’ wife Stacey, their five children, and ‘numerous grandchildren, great grandchildren and friends’.

And now his wife Stacey, 72, has launched a scathing attack on all the people that she feels are to ‘blame’ for her husband’s ‘needless’ death, while detailing how the beloved great grandfather ‘suffered greatly from the ravages of the virus’ while totally isolated in hospital before passing away.

Heartbroken: Grieving widow Stacey Nagy has penned a gut-wrenching obituary for her husband David, who died from coronavirus complications on July 22 at the age of 79 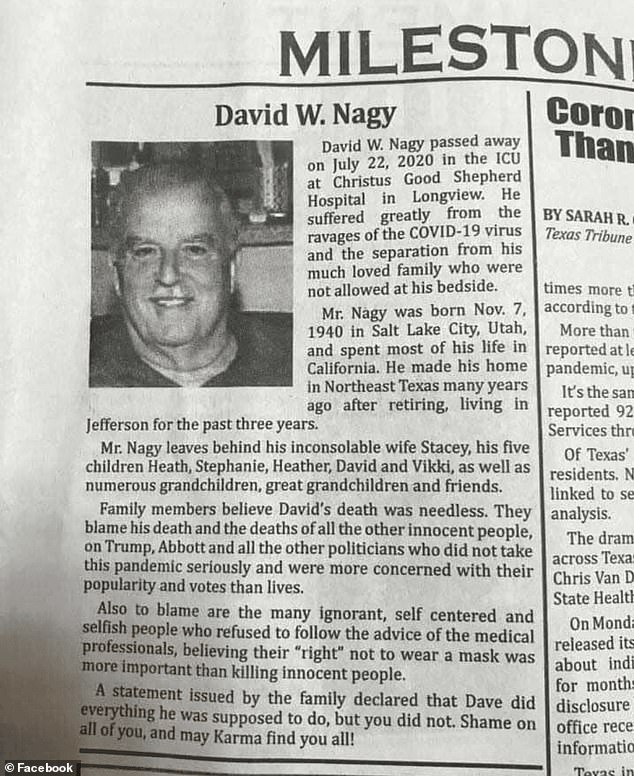 Backlash: Stacey, 72, hit out at Trump, Texas Governor Greg Abbot, and all of the ‘ignorant, self centered’ people who refuse to wear face masks, blaming them for her husband’s death

‘Family members believe David’s death was needless,’ Stacey wrote in the obituary, which was published in local newspaper the Jefferson Jimplecute on July 30.

‘They blame his death and the deaths of all the other innocent people on Trump, [Texas Governor Greg] Abbott and all the other politicians who did not take this pandemic seriously and were more concerned with their popularity and votes than lives.’ 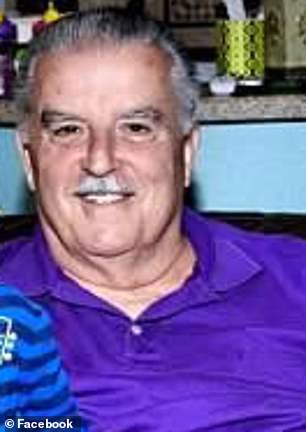 ‘Needless’: In her obituary, Stacey wrote that her husband’s death was ‘needless’, while saying that she hopes ‘Karma comes for’ all those who contributed to her family’s loss

Stacey went on to eviscerate all people who still refuse to wear face masks, branding them ‘ignorant, self centered and selfish’, while accusing them of ‘killing innocent people’ just to protect their ‘”right” not to wear a mask’.

The mother of five concluded the obituary with a warning to all of those she blames for her husband’s death, writing: ‘A statement issued by the family declared that Dave did everything he was supposed to do, but you did not.

‘Shame on all of you, and may Karma find you all!’

The obituary was quickly shared on social media by Jefferson locals, where it spread like wildfire, with thousands of people sharing their heartache over Stacey’s loss – while praising her for speaking out about David’s ‘needless’ death.

Speaking to Buzzfeed about the viral obit, Stacey opened up about her heart-wrenching grief over the loss of her husband – and her anger at those who have refused to ‘follow the recommendations’ from medical professionals.

‘We were married for 20 years and now I’m not with him,’ she said. ‘It’s just been devastating for me.

‘It p****s me off because he didn’t need to die. Had people been following the recommendations, things would have been different. But people don’t.’ 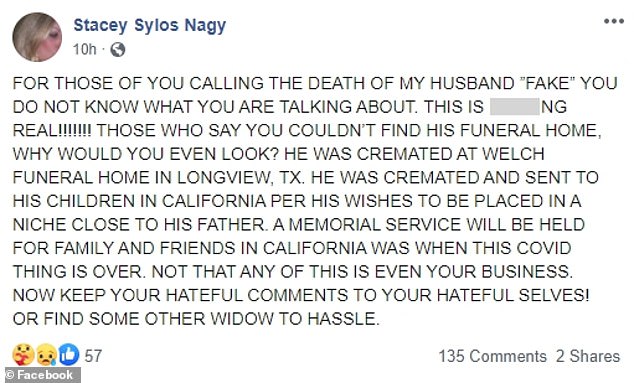 Backlash: The obituary quickly went viral on social media, and Stacey was forced to face cruel criticism from trolls, who accused her of ‘faking’ David’s death

She added that her husband had taken every possible precaution to protect himself against the virus, because he suffered from a number of pre-existing health conditions – including diabetes, heart problems, and early signs of dementia – which put him at much higher risk from the deadly illness.

The grieving widow recalled how her husband was hospitalized in late March after suffering a serious fall, revealing that he was taken into a nursing home after receiving treatment – where she believed he had the best chance of remaining safe amid the ongoing pandemic.

David remained in the nursing home for almost four months, living under a lockdown that saw him almost entirely isolated from his family.

‘He stayed there and I would go and visit, and just go to the window and we’d yell back and forth at each other to talk,’ she told Buzzfeed, adding that the couple would ‘kiss the glass to give kisses to each other’.

As well as publishing the obituary in the paper, Stacey also shared it on Facebook, where she revealed that her husband had died ‘a horrible death’.

‘My heart goes out to his family, and to those who have lost a loved one to this (as Trump put it) “hoax”,’ one person wrote. ‘Had the government stressed the importance of practicing preventative measures instead of denying that COVID-19 existed, less people would have caught it.

‘Regardless of anyone’s health status, much of what’s happening in the US is Trump’s fault for caring more for his image rather than for his country.’