The widow of an Uber driver who was killed in a drunk driving accident with an NFL player has been left ‘devastated’ after seeing a political ad featuring her dead husband.

Driver Jeffrey Monroe, 54, was killed earlier this month while he was driving Indianapolis Colts linebacker Edwin Jackson, 26, who was also killed. The two men were stopped on the side of the road when an intoxicated driver struck them.

The tragedy became instantly politicized upon learning that the man charged with their deaths, Manuel Orrego-Savala, 37, was a twice-deported immigrant in the country illegally. 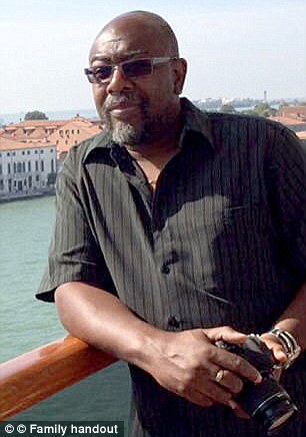 Now images of all three men have been featured in an ad calling for tougher immigration as part of a campaign ad for Republican US Senate candidate Mike Braun, AP reports.

Deb Monroe, widow of Mr Monroe, said the ad should be taken off the air.

She said: ‘Why would you do this? He has not even been in the ground two weeks. You could have had the decency to wait and let us deal with our loss.’ 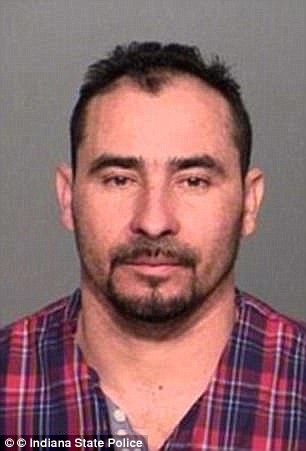 Manuel Orrego-Savala, 37, pictured, was a twice-deported immigrant in the country illegally

The ad, which is narrated by Mr Braun, displays Orrego-Savala’s mug shot as well as pictures of Mr Monroe and Mr Jackson. The Senate candidate has yet to address Mrs Monroe’s concerns, which come in the midst of a heated GOP Senate primary in Indiana.

Immigration has been a hot button issue in the Republican race that features two sitting congressman squaring off against Mr Braun.

But the ad by Braun, a businessman and former state lawmaker, appears to have taken it too far.

Mrs Monroe said she phoned Mr Braun’s campaign to request that they take the ad off the air, but they have not returned her call. 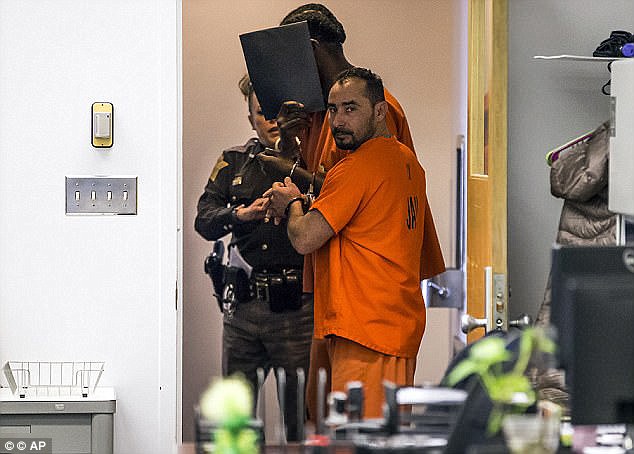 Campaign spokesman Josh Kelley declined to address questions about whether Mr Braun would heed her request, or if they plan on returning her call.

Responding in an email, Mr Kelley wrote: ‘Mike Braun believes that Washington needs to stop illegal immigration, build the wall, and keep criminal illegals like the one that killed Jeffrey Monroe and Edwin Jackson out of Indiana.

He added: ‘Mike and his family are praying for the families of the victims.’

Mrs Monroe, on the other hand, said politicians have been all too happy to ‘exploit’ her husband’s death.

She said: ‘Everyone is upset over this. I can’t let them do this to his name. I just can’t.’

Mrs Monroe, 62, believes that a crackdown on immigration is beside the point.

She said: ‘Immigration didn’t kill my husband. The idiot that chose to drink and get behind the wheel of a 5,000 pound vehicle did.’

‘If he had been sober and gone by them on the road, you wouldn’t even know he was in the country.’

She said her husband of 26 years was against building a wall along the southern US border.

‘He felt the wall was a waste of money,’ she said. ‘That it could be used better someplace else.’